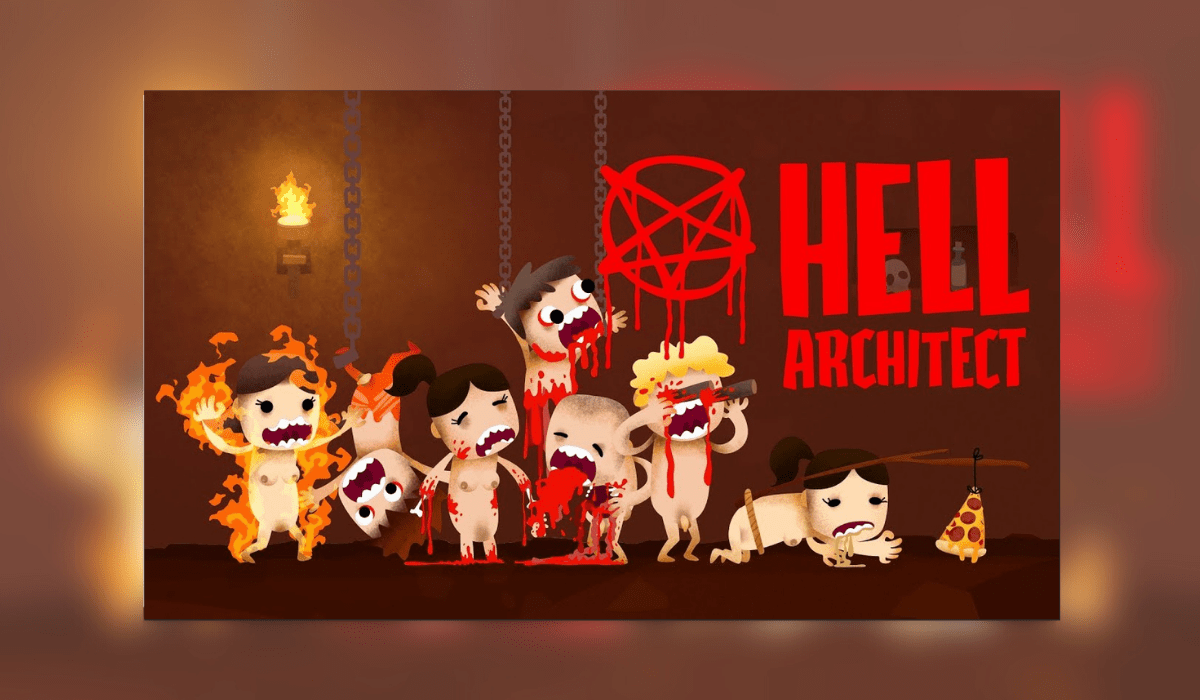 Developed by Woodland Games and published by Play Way and Leonardo Interactive. Hell Architect started as a Kickstarter Campaign. I must also add a very successful one at that. Hell Architect is currently in Early Access/Preview and we were lucky enough to get our hands on it.

Welcome to the bad place!

I have to admit as soon as I loaded the trailer, I knew this game was something I would enjoy. The dark humour with the simulation genre all in one, what is there not to love. Designing your own hell and making it hell from home was something I thought I could get on well with.

Hell Architect is a simulation title whereby you take on the role of Hell Manager. Managing the day to day building of your humble hellbode along with making sure your guests suffer enough to keep things moving. As Hell Manager you have to design your very own bad place, ensuring it’s accessible enough for the torture and occasional downtime of your guests. Jumping straight into the game you are provided with a helpful tutorial that shows you around, helps get to grips with the mechanics. More importantly, it helps you understand the resources and how they are used in the game. Most games have an in-game currency that is related to a monetary value we recognise. In Hell Architect, you collect suffering and from the suffering, you can upgrade and expand your hell hotel.

As Hell Architect is currently in Early Access and Preview there is limited gameplay, however, this does not disappoint in any way shape or form. You currently have access to the sandbox for unlimited play and a couple of chapters within the career mode. I won’t go into too much detail here as we stay clear of spoilers at Thumb Culture. However, I can say that I think the devil himself is having issues with his identity!

As for the tools you are provided with to hellscape your environment, you can dig tunnels for your torture chambers. You can build everything from troughs for food stations to toilets, for… drinking water. Also, not to worry if it isn’t working out, there is also a deconstruct button to help you remove items that you don’t want. However, I would advise that you plan carefully and do not remove too much soil! Otherwise, you will just end up building ALOT of ladders, trust me. I found out the hard way!

As an early access title, Hell Architect is extremely smooth. I find that a lot of titles like this sometimes come with all sorts of issues. Hell Architect is fully polished and ready for release. There were no graphical glitches of any kind and no issues with running the game either. The fun element that is added to the graphics really brings out the amazing gameplay that is bestowed upon you. The comical characters and the blood that gets everywhere just adds to the game.

The soundtrack to Hell Architect is sinister! In-game you have this dark stringed piece playing with sudden clashes of hellish sound. However, on top of the sound effects certainly finishes the game. However, I would advise that if you arent playing Hell Architect with headphones, you might want to keep the sound low. Some of the sound effects could be extremely questionable if your neighbours are listening in.

Hell Architect is ridiculously fun. I will admit now that the career side of the preview game is very short with only two chapters to play. However, as mentioned this is only a preview. Aside from the two chapters mentioned above, there is also a sandbox mode, so you can just play and play and play. You can literally spend as long as you want on each of these just creating your own little hell to call home. Having seen what is planned for the full release there will be a ton of content to play through.

I was quite upset when I realised I had finished the preview, I could have played for hours and hours. I think it really provided you with a good indication of what to expect with a full release. From the mechanics, the gameplay and the humourous element of “Legends” that will be visiting your hellish abode.

There is only one thing I would have changed. Is to swap my preview copy for a full-length version. I am extremely looking forward to seeing how Hell Architect gets on in full release. I also have to say, I am quite annoyed at myself for missing the Kickstarter for this one as well, as there were some awesome items up for grabs! Including naming a demon! But, if you have a good sense of humour and you love a good sim title, I would highly recommend adding this one to your steam wishlist. I for one, are looking forward to revisiting Hell Architect on release.