Taking inspiration from their own experiences in Seattle, Aggro Crab with a team of six people made Going Under. Inspired by their own experiences living in Seattle and the tech industry. The game revolves an unpaid intern named Jackie on their first day at Fizzle and parent company Cubicle. Quickly unfolding as a beat-em-up rogue as Jackie explores the ruins of business start-ups in the basement. The present day setting and satirical plot makes for a unique rogue dungeon crawler as Jackie swaps her marketing degree for melee weapons.

This review was based on the PC version of the game but Going Under is also available on Xbox One, PS4 and Nintendo Switch.

“Going Under is a satirical dungeon crawler about exploring the cursed ruins of failed tech startups. As an unpaid intern in the dystopian city of Neo-Cascadia, you’ll wield office junk as weaponry as you make your way through the offbeat procedural dungeons beneath your company campus.”

Going Under is an incredibly fun rogue dungeon crawler with a unique take on the genre being set in the present day. You play as Jackie, an unpaid intern for Fizzle which part of Cubicle (an exaggerated version of Amazon) who is volunteered to clear out the basement. The basement/dungeons turn out to be the offices of failed start-ups where the employees are now monsters. As Jackie gets the end of the dungeon, you uncover more about what happened and more about Cubicle and their goals.

The team at Aggro Crab really lean into the satire element in the office with Fizzle being a beverage to take the hassle out of eating. Parodying large companies like Amazon, Cubicle and Fizzle from the other employees to the office environment itself. Even going so far to have the office manager being an Alexa-inspired AI who is always listening and watching.  The dungeons themselves are clear nods to Bitcoin & Tinder to name a few and monsters to match.

The combat is definitely Going Under’s strong suit, using beat em up style combat with everyday objects such as keyboards and laptops to typical weapons such as swords and clubs. In the vein of Dead Rising you use weapons found around the environment with pretty much everything available in a fight. With varying durability and weapons having range or getting up close and personal, there are options to suit different play styles. An extra layer to this was how the properties of weapons influenced combat such as moving slowly with heavy weapons but dealing more damage.

Also, weapons which have an area of effect to most effective when close to multiple monsters. Just like how most anything you can lift is a weapon, the environment is destructible which can turn rooms to your advantage or simply satisfying to smash.

As you explore the dungeons you also gain access to temporary modifiers to help get you further in the game. Certain rooms contain 2 random modifiers and give a choice, being practical, silly or both. They range from dealing extra damage to currency that allowed me to unlock other modifiers available later. Choosing which modifiers to take pays off when knowing what the next area likely holds. Some are incredibly fun to use like the weapon enlarger which makes some bigger than Jackie herself.

This review was carried out on PC but the graphic resolution is the same as consoles. I really like the aesthetic of Going Under from the colourful and vibrant above ground world to the more dingy and run down basement/dungeon areas. The dungeons themselves with a distinct aesthetic well suited to the type of start up company formerly was there. The scenery of the different locations while not the high resolution is detailed and with suspending disbelief slightly how you imagine a basement full of goblins is like. The Fizzle office is how you imagine a modern office for a company like this would be, even satirically so with slides between floors.

The characters and monsters you encounter also look excellent. The other Cubicle employees are given more personality from their design model, leaning to their respective stereotypes. The design matches the type of company the dungeon came from with a heaping handful of satire and social commentary thrown in. The exception being Jackie herself whose player model felt much less detailed than the rest.

Going Under delivers the character’s dialogue through subtitles and so except occasional narration has no audible speech. The distinct characters voices can be imagined but given the satirical element, missed out a little on voice over. I enjoyed the game soundtrack by King Felix with the tone matching the room I am in. The music & score changes between areas from the Fizzle office to the different dungeons and even the shop rooms. The catchy soundtrack with the tempo and pitch changing to match the room from overground to boss fights. The sounds of the various monsters I fought made them feel distinct and varied which makes combat more engaging. The environmental sounds from footsteps to items breaking. The latter being oddly satisfying similar to recalling Kratos’s axe in 2018’s God of War.

Despite their only being a handful of relatively small dungeons there is plenty to cover. The dungeon areas are randomly generated so feels fresh no matter how many runs you take. Depending on how much are of a completionist you are, Going Under would take around 8-10 hours to complete. Subsequent playthroughs don’t really add anything but the enjoyable gameplay makes it fun all the same.

Going Under is an incredibly fun rogue dungeon crawler with a unique take on the genre. The plot is filled with satire on real world companies and the technology industry. The game isn’t incredibly detailed or high resolution but that didn’t take anything away from the experience. The above-ground office felt a little empty but the dungeons & combat were very well-designed.  I had quite a few runs and combat & dungeon variety made subsequent runs still feel fresh and enjoyable. As someone who doesn’t play rogue style games often I was hooked by this one so will definitely play more. I am looking forward to seeing what Aggro Crab does next. Going Under scores a Thumb Culture Gold award! 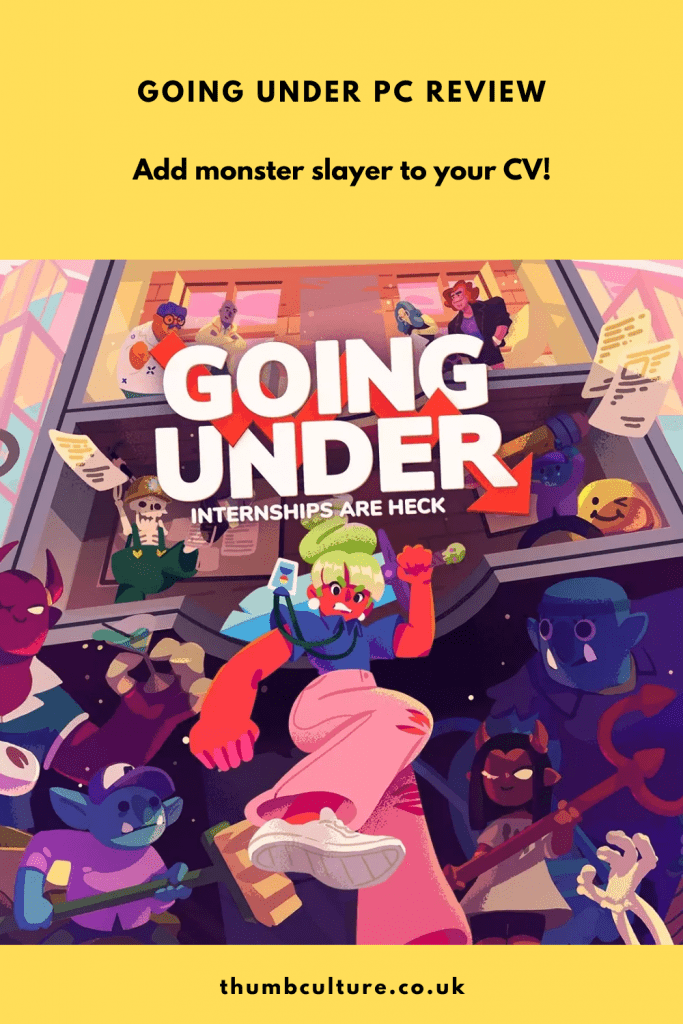 Gym Tycoon Preview – To Lift, Or Not To Lift?

Lair Of The Clockwork God Review – Point And Quip

Planet Coaster Console Edition – A Coaster Of A Time

The Falconeer Review – Sky Of Thieves…

After my Colourblind and Gaming article a few weeks ago, I've decided to keep an eye on games that have or add Colourblind options to...

Planet Coaster Console Edition – A Coaster Of A Time