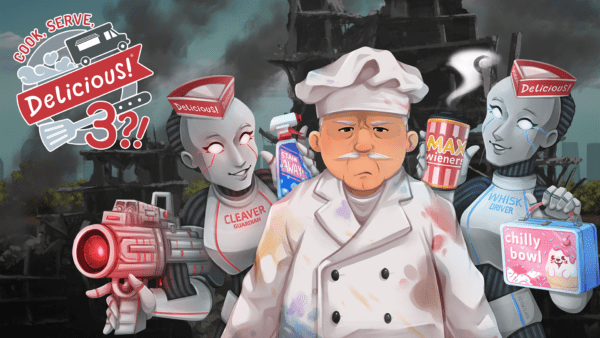 Another new writer lands at TC HQ!  Ladies and Gents, welcome Zen to the team, and here is his first review!

“Hit the road in this massive sequel to the million-selling Cook, Serve, Delicious! series as you travel across the United States to participate in the Iron Cook Foodtruck Championships with your trusty robot crew Whisk (voiced by @negaoryx) and Cleaver (voiced by @havanarama).

Set in the radically-changed war-torn America of 2042, play through an all-new story-driven campaign where you cook hundreds of foods—including many brand new to the series—across hundreds of levels in a new gameplay structure that has been completely redesigned to deliver fast-paced action or take it easy with the all-new Chill Mode that can be toggled on or off at any time!”

At the start of Cook, Serve, Delicious! 3?!, you are thrown into the deep-end with a nice story-driven intro explaining the setting and introducing you to Whisk and Cleaver, your Robot Crew to revive the amazing Cook, Serve, Delicious restaurant.  This time the game is set on a mobile food truck. You are introduced to cooking with a simple tutorial that showcases all of the tools that are available to you, including having your robot dish out meals while you cook and prepare on the fly.

The Gameplay in Cook, Serve, Delicious! 3?! is fast from the get-go and the campaign is fast-paced throughout, offering up many tough challenges along the way that are ranked from gold down to bronze. As you rank up you gain upgrade modules that are used to add dozens of new gameplay-affecting devices to your kitchen such as a server cloner and heat lamps for example.  It is these kitchen enhancements that allow you to get through the levels easier and progress further into the campaign.

As you gain more medals you unlock new roads and areas with tougher requirements to pass. As for the food and meals you can prepare, there are over 200 food types available to buy using the in-game currency that you pocket from completing levels as well as showcasing 6 levels of difficulty based on the number of stages that are required. Some meals require a different combination of foods making it about speed, precision and hand-eye coordination.

Every meal on the menu has been researched by the developer so that you will enjoy being given a full explanation of its origin and full history.  I loved being taught about the history of meals that I already eat as well as really enjoying learning more about dishes that I have never made before. It may lead to inspiration in making these dishes in your spare time and experimenting with different recipes.

Cook, Serve, Delicious! 3?! offers a vibrant set of colours, making the food look so delicious that you want to eat them yourself. The customers and environment, however, are more subtle offering very little detail (mainly due to the fact that the game is about the food.)  There is also a map selection screen that takes on a basic layout making it look like the highways of America.

The Soundtrack in Cook, Serve, Delicious! 3?! creates a deep and intense feeling from the get-go, but then switches it up with more upbeat music, getting you all excited, jumpy and in the dancing spirit for all the excitement about to come. The amazing soundtrack is composed by award-winning composer Jonathon Geer and I feel that the soundtrack is a great addition to the game.

As the timer for each stage whittles down, the music speeds up, throwing you off your game and sending you into a panic to ensure you get those final orders in before customers leave with a bad taste in their mouths. Many times I have listened to the soundtrack and it has gotten my endorphins going, which adds to the enjoyment of this simple but fast-paced game.

The ambience in the background during levels even gives the sense of rushing down the highways of America in post-haste speeds to get to all your stops on-time. You can even enjoy the sizzling of food in fryers, pans and other cooking utensils.

Cook, Serve, Delicious! 3?! offers over 380 fast-paced levels spanning over 100+ hours to leave you wanting more mouth-watering bites of gameplay. Even if you are amazing at the game from the get-go, levels get progressively harder requiring multiple playthroughs to unlock all the medals and unlock more levels to play.

As a casual arcade management game, Cook, Serve, Delicious! 3?! Offers a great set of new mechanics to the iconic series loved by millions. I was new to this game having only watched a few videos online, I was sold and wanted to give it a go with my love of food and, of course, management games.

Having given it a good play I know it will be a game I could spend many hours on end, however, the difficulty level of the game as a whole may make many players put the game down after a short play. The gameplay is seriously fast-paced, the music is amazing and the overall replayability is great offering value for money and endless hours of delicious fun. Having given a good thorough look over this game, Cook, Serve, Delicious! 3?! Deserves a Gold Award. 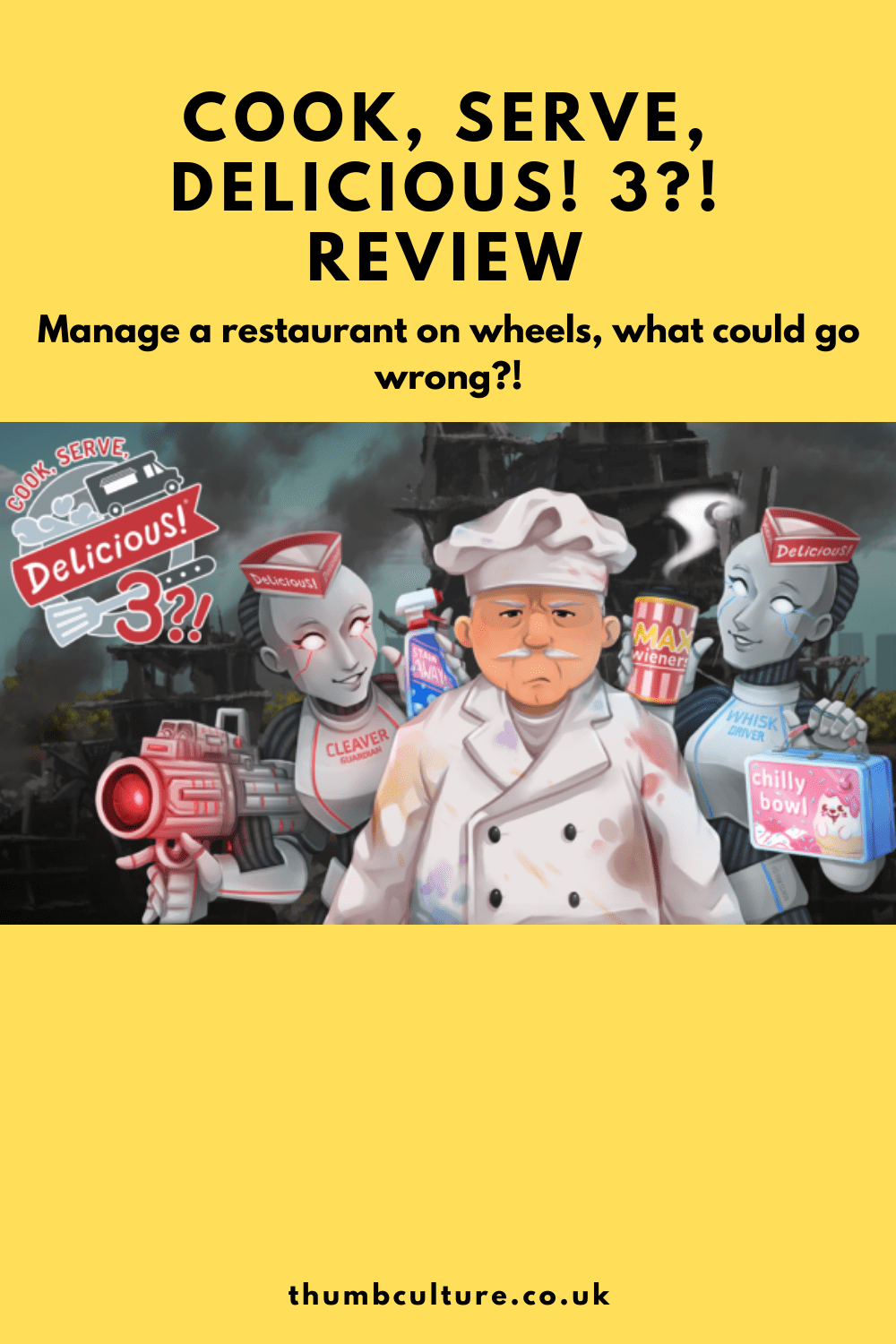