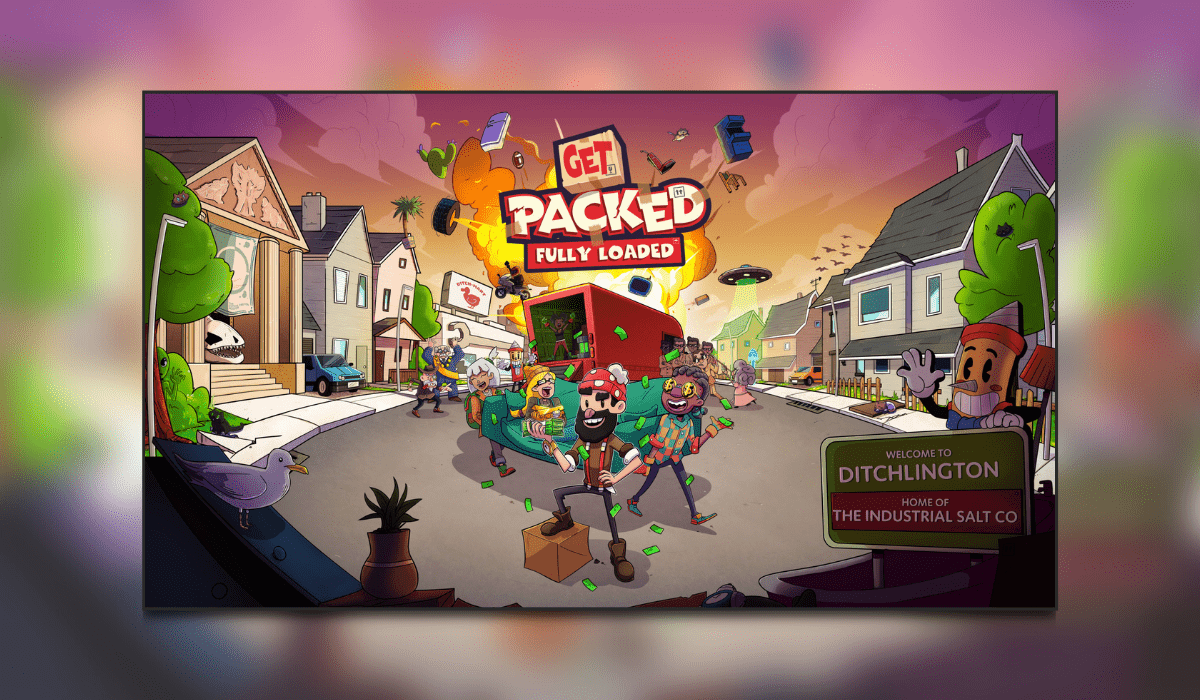 Developed by Moonshine Studios and published by Coatsink, Get Packed: Fully Loaded is the new definitive edition of Google Stadia’s Get Packed. Originally released on 28th April 2020 the Fully Loaded version will be available to play on PS4, Xbox One and PC on the 29th July 2021.

Do you have too many friends? Don’t worry, this game will fix that!

I haven’t played a game like this in a long time, join me as I check out Get Packed: Fully Loaded on Steam (PC). With both “cooperative” and competitive options, this game will test the bonds of friendship. Let me know in the comments below if you lose any friends – or gain some, to this title!

Our story is set in “Dichlington” – a suburban town which is built atop the worlds largest deposit of rock salt. Dichlington has 12,000 residents who are facing eviction by “Industrial Salt Incorporated”. They plan to transform the landscape into a mechanised salt mine after a dodgy dealing with the town’s mayor.

You play the role of a removal worker. It’s your job to collect and pack items from houses and buildings into a small van, often parked across lanes of traffic, in the short 3 minute time frame each level is given. The goal is to pack as many items as you can with the least amount of damage and the highest value possible.

Multiplayer option means friendships will be tested as you get in each other’s way while rushing through doorways and streets. So whether your strategy is to carefully aim for big-ticket items or simply grab everything in sight, Get Packed: Fully Loaded promises destruction and calamity.

Building on the original instalment, the new definitive edition brings a range of exciting new content. However, Picking up where we left off, Last Ditch Removals are sprung from prison by a mysterious group known as the Fellows in Beige. In one of the new chapters, players are able to explore Area 57! This brings new and exciting out-of-this-world experiences and some hilarious new scenarios. In total, Get Packed: Fully Loaded introduces 2 new campaign chapters, 7 extra versus levels, new key art and a range of customisable outfits.

This title boasts simple yet stylish low-poly art with basic colours and lighting. Undoubtedly this was partly due to the games original platform; Google Stadia, and trying to ensure the game’s performance was on point. I do feel that the low-poly style really compliments the pickup and playful vibe of the game. With destructible items, particle effects and day and night cycles, this title truly offers an enjoyable graphical experience.

In Thumb Cultures review of the original Get Packed on Google Stadia, Dan said “The sound effects did play a big part. From the destruction of the items we were moving out to the car crashes and explosions, the effects made the game frantic.” and I definitely agree. The sound effects add a level of urgency, from items breaking to car horns tooting, each sound reminds you that you’re fighting against the timer. Non more so than the desperate meows of the cat as I chase it around after it escaped from the van… again. Tying into the graphics is the nonsensical dialogue of the characters. I’ve found this really compliments the pick-up and play vibe of the game, by minimising chatter and maximising gameplay.

Being able to pick up and drop off as and when you please. This feels like a game I would come back to time and time again for an hours gaming session with friends and family. The simple to master mechanics and clean looks means you can play with literally anyone. It’s a game I’d happily play at charity events or meetups, to inject a little extra fun into the occasion.

This is not a game in which you will spend hours on end playing. However, it’s a great game to play with family and friends and something to return to for shorter gaming sessions. The game is good clean fun and definitely provides value for money, well worth adding to your collection.

With the addition of new campaigns, new playable characters, customisable items. Not to mention the newly supported platforms there has never been a better time to step into Dichlington. What are you waiting for? Grab your friends and get packing! In conclusion, I award Get Packed: Fully Loaded a Thumb Culture gold award.