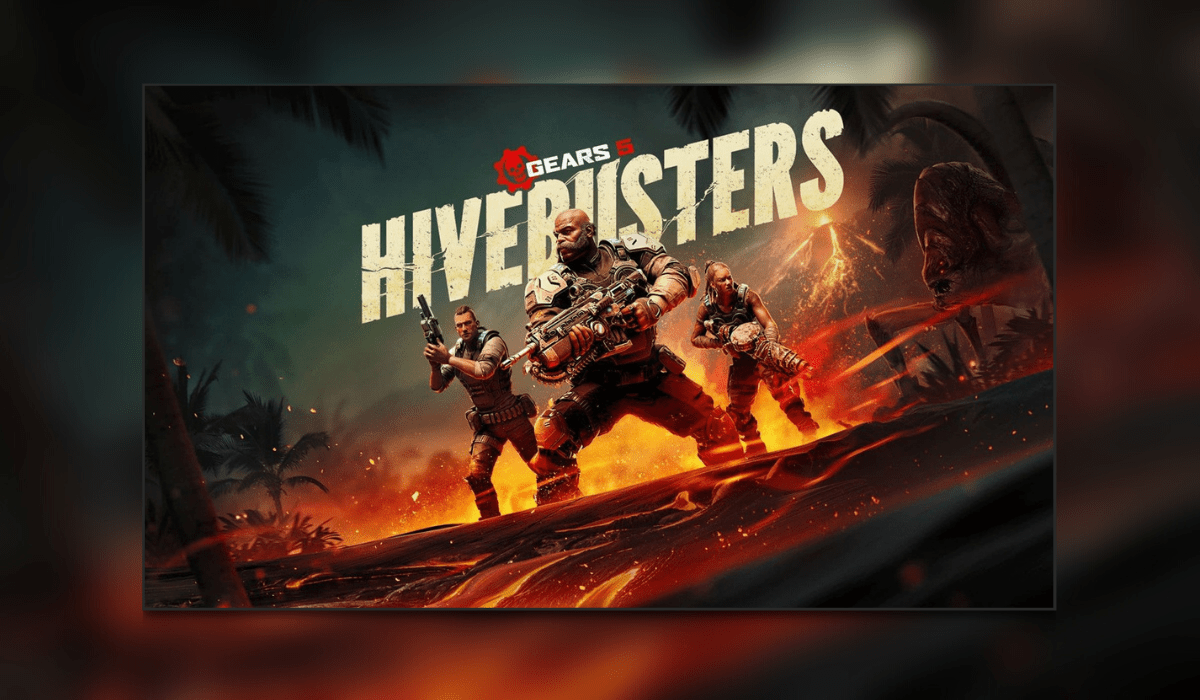 It is the year 2020… A year where Microsoft struggled to really demonstrate why their machine was the most powerful on the market. Yet they seemed to release, with zero fanfare, one of the most gorgeous games I’ve seen. Yet they’ve finally done it with Gears 5 Hivebusters.

Gears 5 Hivebusters is a free (well on Game Pass) DLC for Gears 5 that is a 3-hour origin story of Scorpio Team. The team was first introduced in Gears 5’s sorely underrated Escape mode. Whilst it’s only a small, linear campaign, it’s packed with a lot of character and some really impressive visuals.

Typical Scorpio… Blowing up swarm with a deadly gas…

The Escape mode in Gears 5 was effectively the act of poisoning a Swarm nest. It was then a race against the clock, and the various antagonists, as you make your escape. Surprisingly, considering Gears 4 utilised the mechanics of Horde mode in the campaign, this element isn’t in the story mode. Instead, this is an origin tale of the Scorpio team, and how they came to be the elite squad in charge of these borderline, suicidal missions.

Having played through this over the holiday break, I am still incredibly shocked that Microsoft hasn’t been shouting from the rooftops over this title. Sure, Gears 5 Hivebusters is just DLC, it’s not as grand in scale as the main game. But it is stunning, runs silky smooth and shows where their teams and the power of their hardware can prevail.

If you have played any of the games in the Gears of War franchise, then you know what to expect here. Gears 5 Hivebusters structure is very safe. It lacks the huge open areas of Gears 5, and is a little more akin to the campaigns found in Gears of War 1-4. Really the big focus is on the characters.

That being said what the game does bring is some wonderful set pieces. Not to mention some interesting mechanics carried over from Escape. Featuring a set cast of 3 characters, they each have their own skill.

Keegan – This is the main man of the squad. He is able to deploy an ammo replenishing point that all characters can huddle around to refill their weapons.

Mac – Featuring a Scottish accent (turns out there is also a Scotland on planet Sera) he is able to deploy a forcefield-like shield ahead of him allowing you to use him as cover to push forward.

Lahni – A very spiritual character, but with a mean side. Lahni is able to run up close with some close combat finishers beyond the usual melee attacks.

All of these specials are pretty standard fare but can be upgraded to add some twists to them. Seeing as the main campaigns don’t uses these mechanics it does feel like a nice way of bridging the gap between Jack’s upgrades in Gears 5 and the skills of the characters in Escape Mode.

Frankly Gears 5 Hivebusters is gorgeous. As mentioned above I am surprised this game, albeit just DLC, wasn’t featured alongside showing what the new console hardware is capable of. Although the campaign only spans 3 acts there is a rich variety. The game starts up in a lush, dense forest. A lava river makes for a fun defensive level. Not to mention the grimy corridors of a defunct mining operation.

There’s a real variety to these levels that’s really hard to believe has been packed into such a small timeframe. Of course the Gears 5 audio is still present. Guns sound meaty, there’s a lot of atmospheric sound and the music ramping up during conflict. One particularly great moment for the sound is as you approach a village. The roar of festival drums amps up as you get close and it really adds to the atmosphere.

Gears 5 Hivebusters is only a 3-5 hour romp. It’s a very focused, linear story that was more akin to the original trilogy. There are collectables, including upgrades for your characters and their special skills. Beyond that, though this is very much a one and done event, perhaps a second playthrough with a co-op partner too.

Fortunately, you’re able to install/uninstall the DLC completely separately so you can protect that digital storage.

Gears 5 Hivebusters is great. Ok, it’s not a grand epic; it’s a small, downloadable add-on to an existing game. But as a nice free expansion that fleshes out some of the new characters? It really does hit the mark. It’s also a very good way of showing off your new Xbox Series X console.

Whilst it’s a very safe campaign, in the sense it’s a standard, linear Gears of War-style campaign, there’s enough variety in there and likeable characters to entertain you. I’m giving Gears 5 Hivebusters the Thumb Culture Gold Award and highly recommend it for the visuals alone. 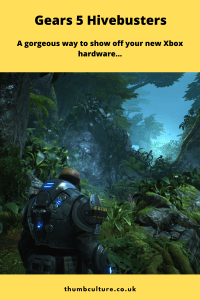