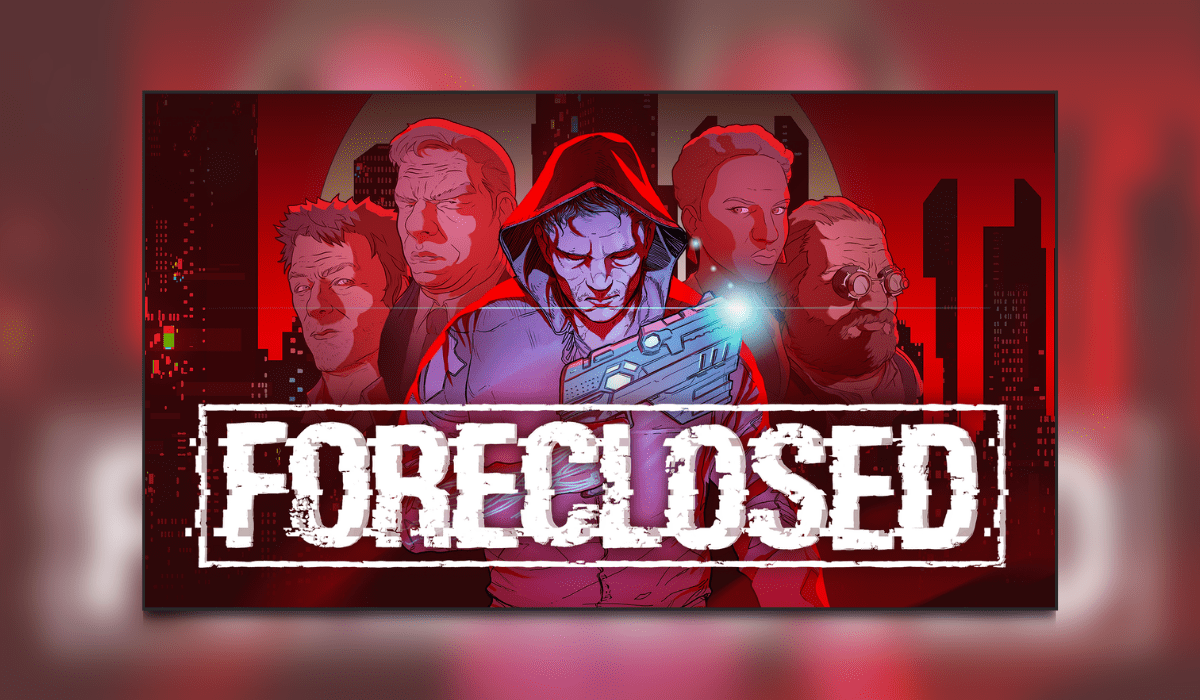 Foreclosed is a cyberpunk action shooter with RPG elements experienced in graphic novel panels and stylised graphics. The title refers to when people are property and upon a company going under, their identity is being auctioned off. We begin with the protagonist, Evan Kapnos, being foreclosed and suddenly forced on the run. Kapnos is smack dab in the middle of a conspiracy and the only way to survive is with some help from allies is get to the person at the top and make them a counteroffer.

I enjoyed Foreclosed for the visual style taken by Antab Studio and the satire of all-powerful corporations essentially owning people. The visual style was unique and interesting and one of the reasons the game caught my eye. I and the TC team would love to hear from you so feel free to comment below on what you think of Foreclosed.

Set in a linear single-player narrative experience, Foreclosed takes the setting of a cyberpunk near future (e.g. Blade Runner) and adds its own spin on it. The story leans into the noir element with the voice-over conveying the thoughts of protagonist Evan Kapnos as the game progresses. The story does feel cliche and by the numbers, but I found myself invested enough to see it through. The use of panels like in comics and the stylised graphics were made into part of the game mechanics interestingly. At various points, I would see panels with different angles on locations or moving between areas crossing into other panels. I did find this frustrating occasionally but overall I found it a novel way to help keep Foreclosed feeling fresh and engaging.

Combat in Foreclosed felt repetitive at least from what I found when there was little variety in enemies. When using Kapnos’ pistol, most of the time I felt there was little risk in shootouts when you have unlimited ammo and heal from cover. There was little to no variety in the enemy behaviour either which felt a little dull. Later in the game, you can unlock special cybernetic abilities e.g. telekinesis which did spice it up. I also did enjoy the option of stealth or no hold barred shoot up to suit different player’s styles.

I did find the RPG elements appealing when deciding on cybernetic upgrades for Kapnos himself and his pistol. This also gave more variety in Foreclosed and so approaches to suit different players. I was a little disappointed that the dialogue options seemingly had no impact. I would have enjoyed different portrayals of Kapnos getting different responses or an effect down the line. When not shooting bad guys or throwing them around like rag dolls the game throws some puzzles at you. With only a bit of variety, these puzzles keep you on your toes and ranging from timed or being stealthy they’re varied enough to avoid being stale.

I am basing this review on the PS5 version of Foreclosed for which the graphics etc couldn’t be changed but I assume made the best use of the hardware available. I touched on it earlier but I enjoyed the stylised graphics used in the game. It all ran smoothly with no frame rate issues or graphical glitches or the like. As seen in games like Cyberpunk 2077, depicting a futuristic city can be difficult but here the visual style shows the scope of the city but without it being as taxing. I really enjoyed the visual design here, it was more colourful than you may expect.  Features like the words describing sounds e.g. “boom” and “bam” like the Adam West Batman TV series were satisfying to see!

The story of Foreclosed was a tad cliche in this noir cyberpunk game but the voice acting worked well with the dialogue and that applies to most characters from Evan Kapnos to the cold-hearted villains. Also, the game makes effective use of the Dualshock controller and utilising it to deliver allies radio communication. I felt that the sound and soundtrack complemented the visual design really well. While not my cup of tea, the soundtrack was techno-style music like you may expect for the genre. The game sounds went hand in hand with the soundtrack from the environment to combat and worked well together.

I had fun playing Foreclosed and while it is a linear single-player story, I feel it missed a few bits. In the future, I would like to go back and see anything I may have missed from what I know now. I also would like to see about getting the various trophies which definitely adds replayability to the game. Beyond that though, it is a game and story I would like to experience again at some point.

I enjoyed my time with Foreclosed as it put its own twist on the cyberpunk genre. With an interesting enough story and solid voice acting, I did want to see it through. However, the gameplay, especially combat, did feel repetitive with predictable enemies. It did look and sound great though with the novel use of multiple panels to show other areas & locations. I do plan on revisiting Foreclosed and try other ways of tackling the game.  I give Foreclosed the Thumb Culture Silver award!