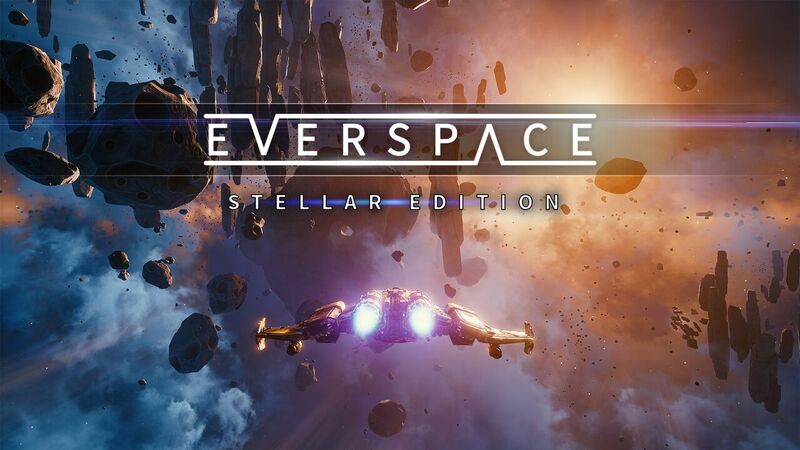 Everspace is a single player 3D rogue space shooter by Rockfish games and is the German developer’s first foray into the PC and console gaming world.  Exhibiting at the earlier EGX: Rezzed in London, Rockfish games have made the leap across from mobile gaming where they found huge success with the “Galaxy on Fire” series.  Born from the loins of a kickstarter campaign, as many indie games are now funded, Everspace has been available on PC and Xbox One since 25th May 2017 however it is finally arriving on Playstation today (22nd May 2018).  So what is it all about then?

You play as a character called Hero who recalls vivid memories of a dispute that turned physical, escalating to being jabbed in the neck with a strange liquid filled syringe, and then escaping with a space ship.  As you arrive out of hyperspace here is where you take over the gameplay.  There are a lot of unanswered questions and fragmented flashbacks that you need to piece together in order to make sense of them.  You are joined in the spaceship cockpit by your friendly and fairly sarcastic onboard AI called “Hive” (Human Interface Virtual Entity) that attempts to keep you on the straight and narrow while offering you guidance throughout the story.

You have main control over your spaceship and it is down to you to avoid oncoming asteroids and basically survive your space journey by any means necessary.  Each sector that you hyperspace jump to allows you to mine nearby rocks for plasma, loot fuel from container vessels and dog fight with enemy ships to earn credits and possibly pickup a new weapon if you’re lucky.  Fuel is a necessary commodity as without it you are pretty much buggered and cannot warp away, vital if you should outstay your welcome and the powerful fighter ships of the Okkar, a reptilian race, arrive.  You seriously do not want to be spending too much time in each sector to prevent this from happening!  Opening the star map reveals all of the possible destinations that you can jump to however the threat that lies within each one is not known until you upgrade your scanner perk.

Your space ship is rigged with some decent firepower and in true galactic spirit offers a primary and a secondary weapon to shoot at your will.  Primary weapons can be an assortment of Gatling guns, pulse lasers and fusion canons while your secondary weapon has the bigger, more explosive variants, such as little missiles, big missiles and huge shield smashing missiles.  Yes Everspace sure love their missiles!  As well as the primary and secondary weapon slots you also have the addition of other game changing consumables with the ability to equip mines, drones for attack and defence and even a way of slowing down the action for 20 seconds.

Dogfights are fast and require some lightning reactions along with a tactical blend of using both primary and secondary weapons to lower shields and deal that killer blow.  Power can be diverted around your ship by touch of a button to enhance your firepower or boost your shields, necessary when it is all kicking off.

Believe me, the hostility and rate of escalation from dozily meandering through the stars to being on the receiving end of a heated dogfight is mere seconds away most of the time.  Luckily repairs can be carried out “on the fly” by pulling up the repair console, effectively pausing the game, however the gunfire can be pretty intense, piercing your ship walls and damaging your vital equipment such as the shield generator, life support system and engine, this leads to the inevitable ending for us all. Death.

In Everspace you will die. A lot.  Although at first it’s a big deal and to any gamer death is a massive “Game Over” followed by the restart of the mission, here it is a case of using the credits you have earned so far on the skill tree to upgrade your ship as you see fit and then go back out there once more, hopefully learning from your mistakes, i.e. do not attack the G&B vessel this time as they do get pretty narky about it.

There is a reason why you can keep coming back, something you will discover early on in the game.  The onboard Hive delivers some much needed sarcasm to break the tension and away you go.

When it comes to the controls something does not feel right with Everspace.  There are 4 preset configurations you can choose from however they all seem wrong.  The roll for starters needs to not happen by holding down the stick as it is fiddly to pull off when chasing down or evading an enemy, however this can be adjusted by selecting the “switch roll and yaw” function.  I had a play on StarWars Battlefront II to try and put my finger on the problem I was having and immediately the way that the spaceship moved when turning seemed to be one of them.  In StarWars you get the feeling of gliding when you turn your spaceship where in Everspace you pretty much spin on the spot without any realism at all, you cannot feel your turns.  I tried altering the sensitivity however all this did was slow down how quickly I turned on the spot instead.  It is a shame as I feel this is one of Everspace’s let downs.

The graphics look great on the Playstation Pro with Everspace running in a 60fps checkerboard 4K as opposed to the Xbox One X’s native 4K version.  The reason being that “the PS4 Pro does not provide the same oomph as the Xbox One X” Michael Shade, CEO of Rockfish Games.  The downgrade is not noticeable though might I add.  Space feels immersive, objects well rendered with good lighting details and explosions bright and vibrant.  The ability to pause the game and take photos of the current action that is happening is a nice touch, although not a unique selling point.

For me the dialogue between Hero and Hive is fairly entertaining with the sarcastic and often humorous interjections breaking up the chaos that is happening all around you.  The 60+ tracks create a cool mix of ambient space type synths and accompanies Everspace well.  The sound effects of spaceships buzzing around and gunfire is clear with no signs of any distortion or jittering.

With over 30 hours of gameplay there are a lot of flashbacks to make sense of in order to piece the story together and get to your final goal.  Will you stick with it? well it depends on your love of space games.  This is by no means Elite: Dangerous or No Man’s Sky (thankfully) however Everspace is pretty much a case of quickly exploring each area, looting as much as you can and warping to the next area before the Okkar catch up with you.  With each sector jump, a bit more of the story is revealed to you.  Then there are the perks, lots of them to be had and also upgrade using your credits.

Finally there is the Encounters expansion, available to buy as a dlc or included in the Stellar Edition along with the 60+ original soundtrack.  This adds a new medium fighter class ship to the game called the Colonial Sentinel complete with new weapons, gadgets and consumables.  Oh and there is also another 10 hours of content through the new story characters, quests, factory space stations and the ability to visit the Okkar homeworld.  You will be pleased to also know that Everspace does not feature any micro-transactions.  Wow that feels good to be able to write that!

Overall Everspace is not a bad space rogue game however for me the spaceship controls just don’t seem to truly connect well.  On the PC there is the function to use VR in order to look around space as you fly however sadly this is not something that will be coming to Playstation any time soon. “It took us a lot of time to get VR support ready on PC, and we still run into new issues when migrating to a newer version of Unreal Engine” Michael Shade, CEO of Rockfish Games.

Well there you have it folks, not polished but still luring to play.  I award Everspace a Bronze Thumb Culture award!

Disclaimer: A code was received in order to complete this review.