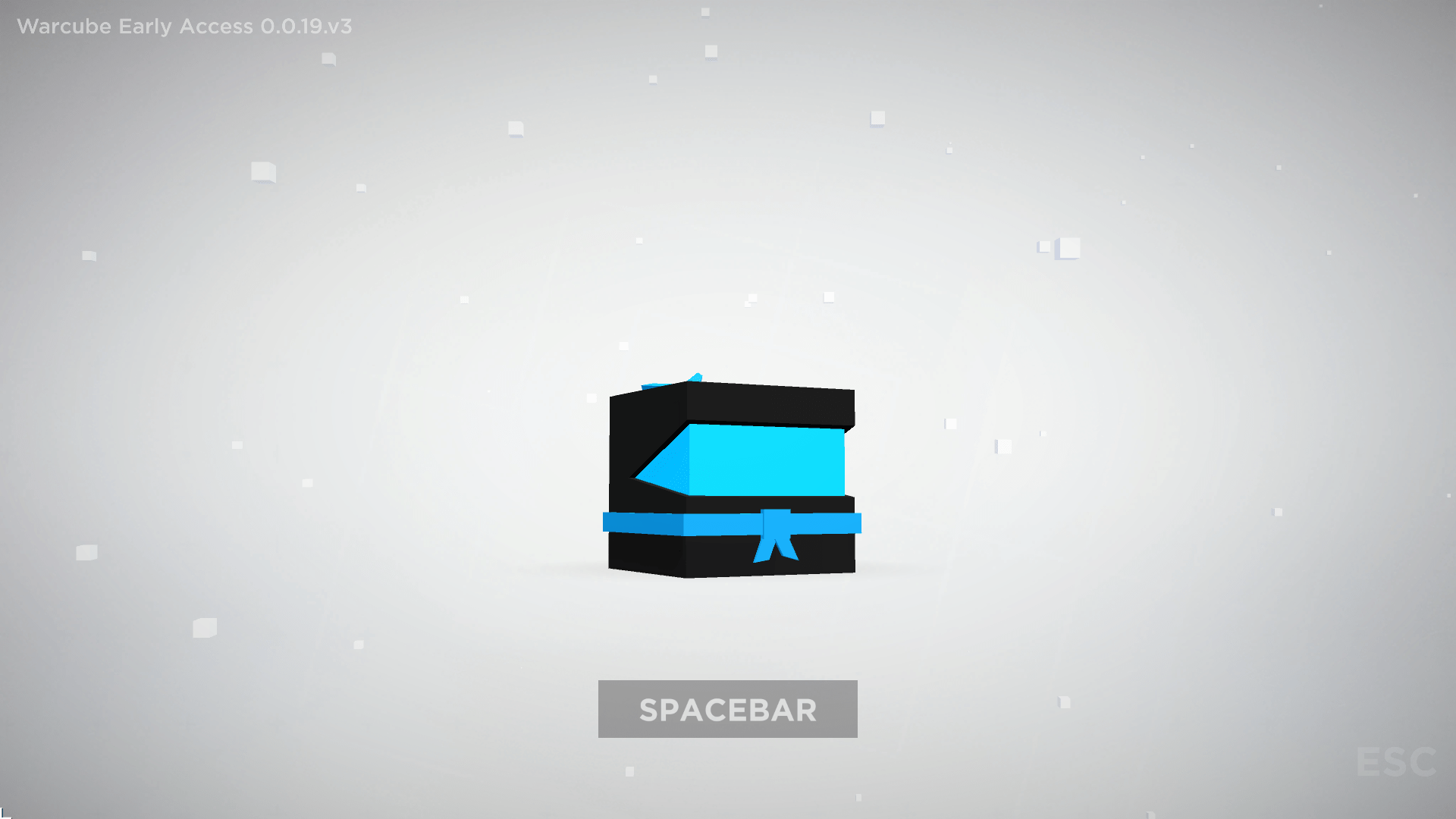 Warcube is a humorous game that takes the simple concept of cubes and makes them the core of attention. The result? Cubes in a fantasy setting with an overly dramatic combat system that could be something really magnificent.

Haven Made have created a game that looks incredibly simple on the face of it, but as you progress, Warcube becomes a lot more interesting. I gained access to the title quite a few years back now, and the progression has been both impressive to see, but also worrying. 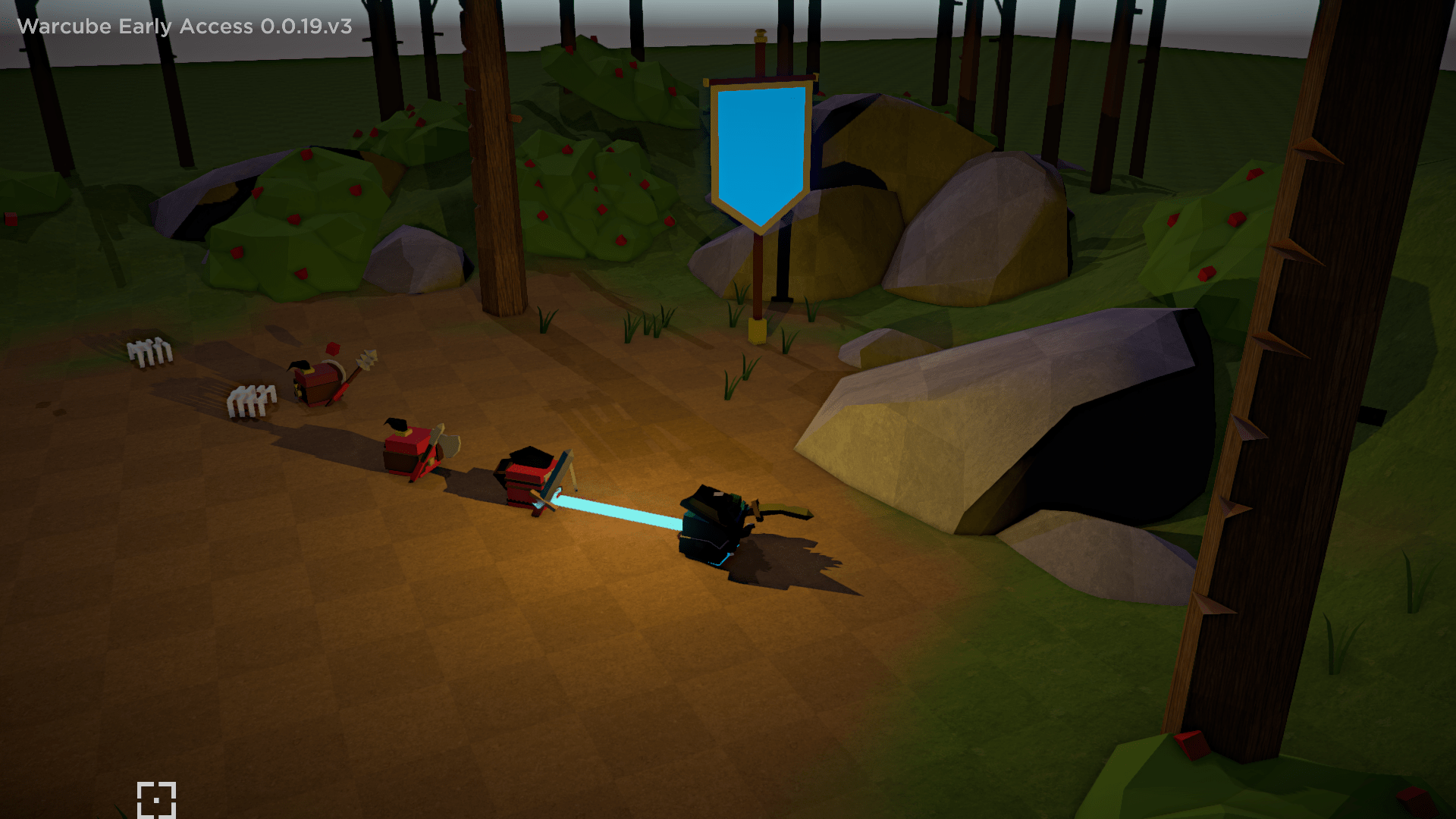 I booted up the game with the excitement of being a cube fizzling around within my gut. And after the introduction cut-scene throws me down to the Old Kingdom like a cubic Superman on fire, I smashed my way through the easy-peasy tutorial. After slapping some scarecrows around with my big stick, I’m gifted a sword by the knowledgeable farmer despite unintentionally murdering his cow upon my arrival. I also find a bow.

The story drives your ego by naming you a legend who has fallen back to the Old Kingdom to rid the world of the enemy and take back the castle. Of course doing so requires camps to be liberated, and an army of blue cubes to be formed. 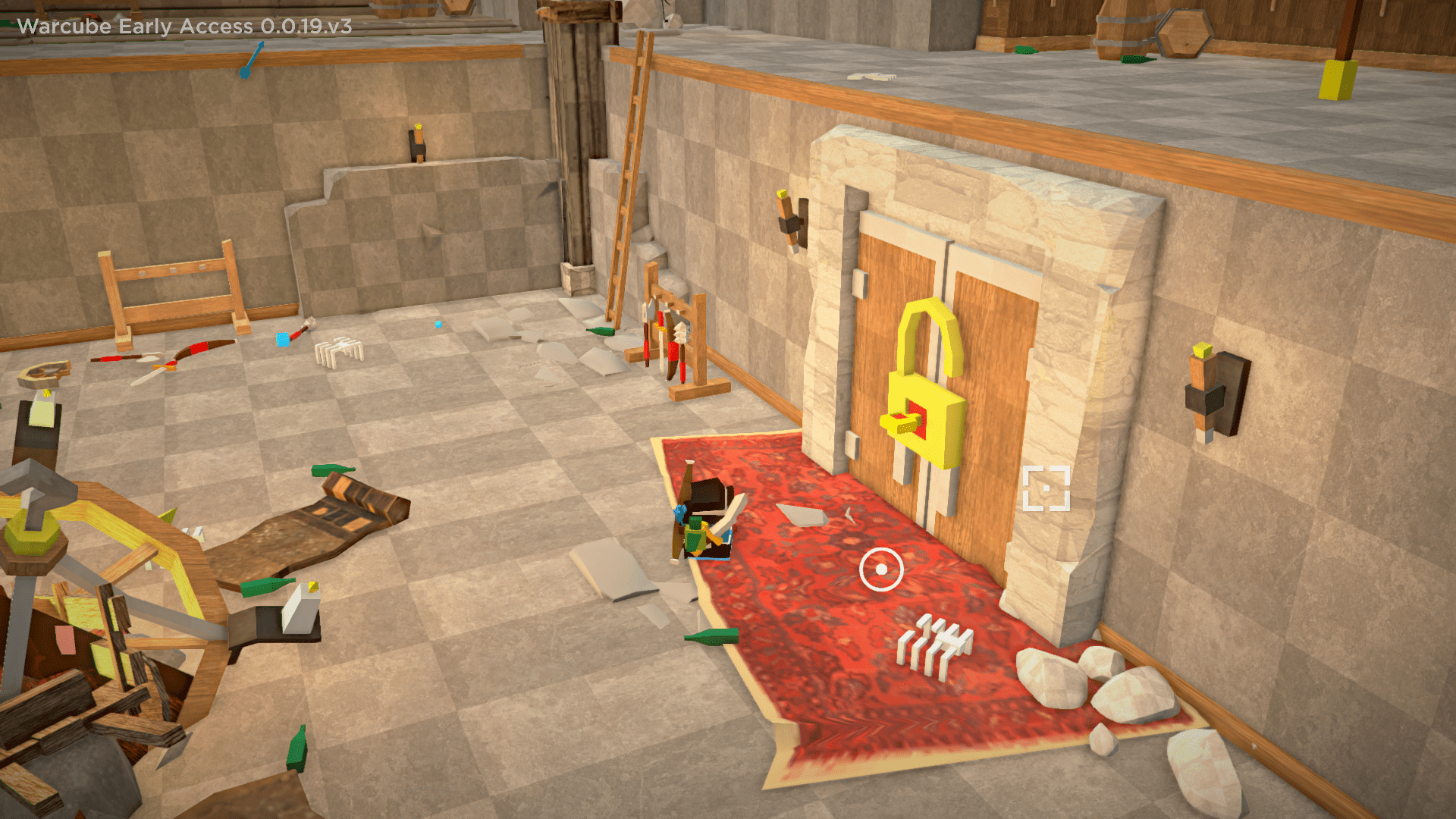 It situates you from an isometric viewpoint that can be rotated 360° around your cube at any given moment. There’s also a camera view where you can drop the camera even closer so it plays almost like a third-person title. A nice touch but also buggy. The attack direction becomes an impossible task, and the camera gets stuck behind environmental objects rather than going through them.

Warcube uses colours to differentiate good and evil, with the stereotypical blue coloured cubes representing innocent, friendly characters and the red coloured cubes for enemies. Camps liberated will throw up a blue banner, and camps still left to liberate show red banners. You can thankfully keep track on how much of the world you’ve controlled by using the tactical map, giving you a birds eye view of the world. 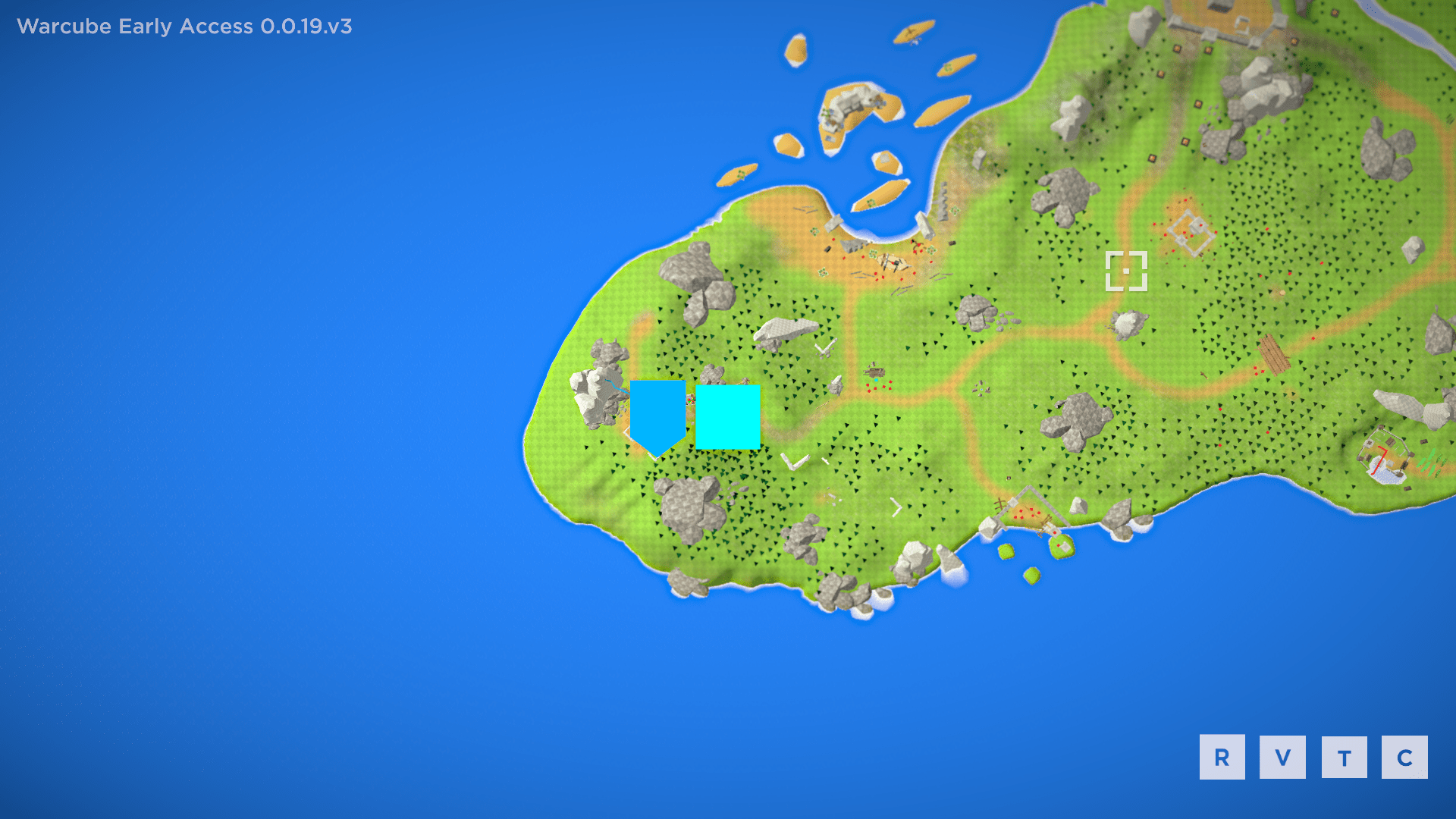 When not in tactical view you’ll be in the isometric world map where you can freely wander around to whichever area you want to enter.

So I’ve got my sword and bow in hand and I need to liberate camps to free the innocents and create an army. A simple task I say. Enemies see me coming towards them because I decided not to opt for the stealthy approach of bushes and slow movement and instead rush them with my cubic muscles.

I swipe at the first enemy, but another is approaching me from behind. I click and hold the attack button to begin a short slow motion window to line up my next attack. After directing the arrow on the floor in the direction of the oncoming red cube I release the button and unleash a devastating blow. Then I repeat the click and hold technique to finish off the other approaching enemies creating a wonderful combo.

Finally I aim my crossbow at the red cube in a tower above, firing an arrow as I jump and watch as my impeccable aim clears the area. Happy with that I press the GIF key which saves the past five seconds as a shareable GIF so I can boast about it Online. 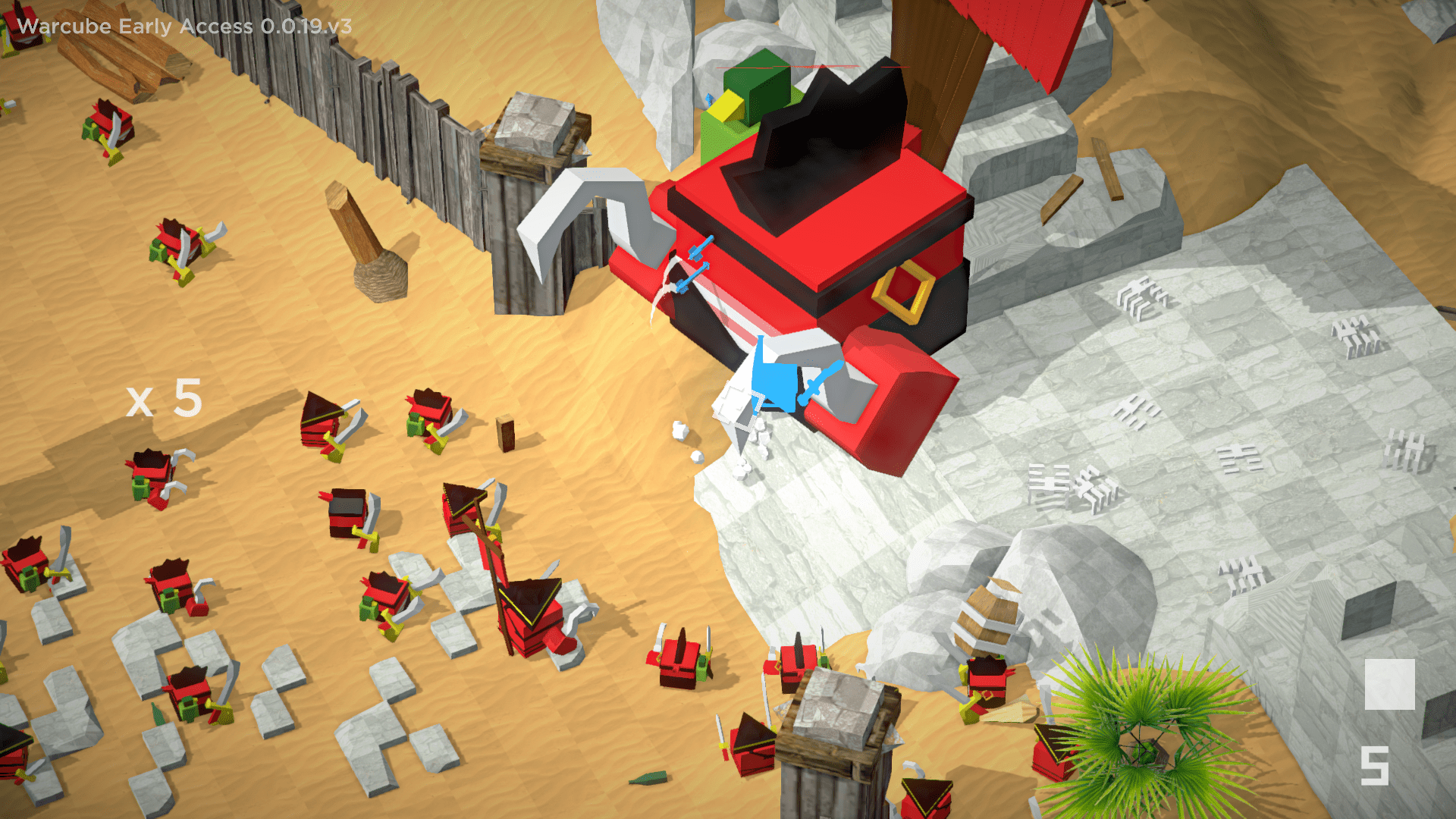 I wish it was always that badass though. You see, Warcube has a really lovely combat system that stands potential to be enjoyable and simple, while ensuring that you look as badass as possible. Sadly it’s let down by the aim not being calibrated right just yet, and the perspective throwing your focus off.

Additionally, a nemesis system is in place that grows the enemies mass every time they defeat you. Currently, the mass also increases the range of the enemy’s attack…with an invisible attack. Usually melee combat requires you to be right up against the enemy, but after two size increases by the enemy they become impossible to get near. Basically, they can attack you off screen and you’ll continually die.

Seeing as the game is still in Early Access with a fair amount of bugs creeping around, I experienced a few game crashes. On top of struggling to navigate around the 3D world I also found the UI to be fairly cluttered, as well as buggy at points. All easily shrugged of though because it is after all still being developed, and the fun factor forgives it.

The humorous tone of Warcube certainly brings out some chuckles and lays down some groundwork on what we can expect when it leaves early access. Honestly, I could see myself spending ages with the combat system if it got fixed. Thankfully an Arena mode looks to be in the works.

I enjoyed my time running through the simple and vibrant low poly world and enduring being defeated by undefeatable titans. The worrying part of the games progression though comes with the sudden influx of bugs. I recall playing it many updates ago and not having much trouble, so it’s weird to see all these bugs suddenly appear. I just hope that Warcube doesn’t try to do too much, as at the moment it’s a beautiful, buggy experience.