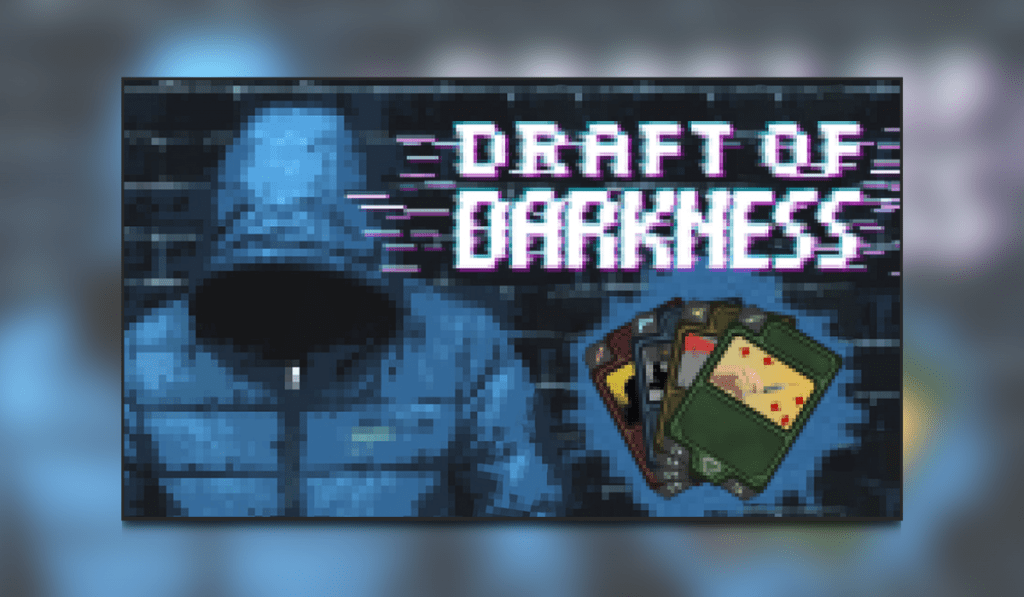 Welcome to my preview of Draft of Darkness. Brought to us by Crawly Games, who published and developed Draft of Darkness. This game will be available on Steam Early Access on 30th July 2021. Draft of Darkness is a survival horror game that has deck-building features as well as exploration through roguelike dungeons. I was seriously surprised to learn that Crawly Games is actually a one-man team. When you play this game it definitely does not feel like the work of a single person. Think along the lines of how polished Stardew Valley felt when it first came about.

Draft of Darkness – Take A Wrong Turn And It Might Be Your Last!

Can we make it through the dark and dank corridors? Continue reading to find out. If you enjoy this preview, please be sure to check out my previous review here where I played Bloodroots.

First off, the game doesn’t seem to have much of a story, yet. Don’t forget this is early access so this could easily be added into the game later, or, being a roguelike, it may not even have a story, so to speak.

We start off the game with the choice of three heroes, Jake, Cara, and Pavel. Each hero has different abilities and can use different weapons. For example, Jake looks like he’s street-ready and can use pistols and can use a torch to provide extra light as well as a melee weapon. Cara who is dressed like a teacher or an office worker can use knives and syringes, which are useful for healing allies and also stabbing enemies. Pavel looks like a gangster from the 1930s and he can use shotguns and axes. I went along and chose Jake. As we’re progressing through areas we can also find allies who we can recruit to our team, such as Nurse Diamond who is below.

The game has a really simple way to play. You move your chosen hero around the map, square by square, looting and (in my case) shooting our way through each area. As you progress through, you will find small cupboards, desks, chests of drawers, and more that can be searched and looted. Ensure you loot everything you see, as you’ll need the resources. For example, as I mentioned, Jake can use pistols. The pistol ammo is not unlimited.

This results in you having to choose your moves wisely when in a battle. It’s all good shooting your way through basic small rats or spiders. But what you have to remember is you could have a tougher enemy around the corner or even a boss fight through the next door. Choose wisely. What is good, is when you’re looting, you may come across some new cards for your deck. You also win a card at the end of each fight, you can choose from one of three that are offered to you.

Speaking of choosing wisely, the game has small events where you need to make a decision. Such as the above screenshot. Also, another was a small robot that had its eyes light up when I approached it. The game offered me some choices. I chose the wrong path, which resulted in Jake being injured. Remember playing those RPG books from when you were younger? Well, you’re going to need to make the right choice here too!

The battles in Draft of Darkness are also quite intense, you need to ensure you take the enemies down as quick as possible. But again, remember me mentioning the limited ammunition above? This is now where you need to be careful. You can use the bullets if you want. The conserve button will be a lifesaver in many cases. This lets you, the player, unload your ammo from your cards in your hand so you can then use, for example, a pistol as a melee weapon and pistol whip those critters until they fall. 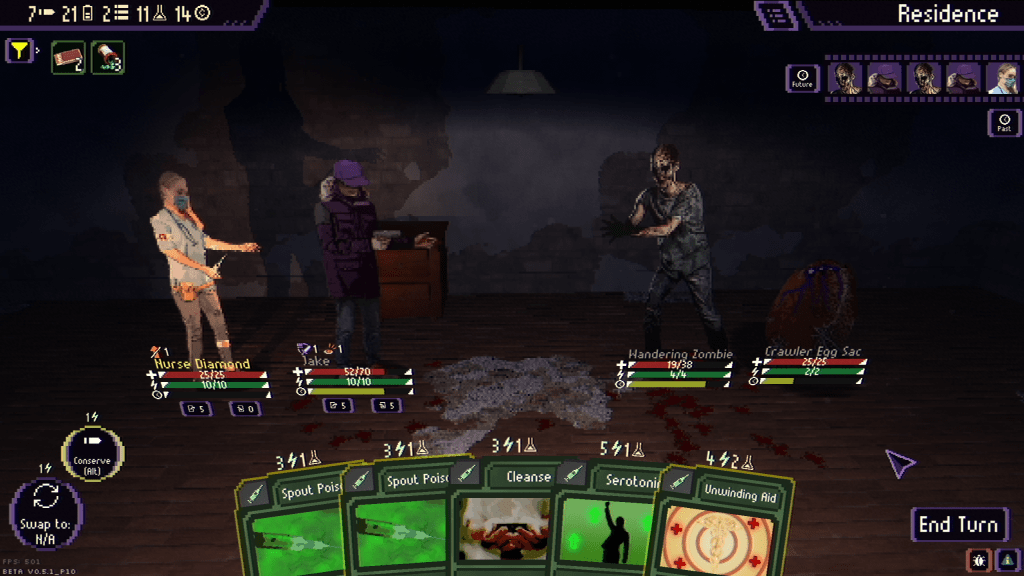 The graphics actually look crazy good, when you can see them. It is very dark throughout most of the game, but, that is the setting of the game, don’t let this distract you from the fact the game does actually look good. When I was playing the game I couldn’t really think of another game that looked similar to this. It has a retro feel to the graphics, but at the same time, it also feels modern. It’s quite a strange one that I can’t really describe other than it does look very nice and seems to fit the gameplay very well. The game is very stable, even at this very early stage in its Early Access journey.

The audio in Draft of Darkness is fantastic. Sound effects are creepy, keep you on your toes, and the music is just as good. There are real atmospheric vibes here that fit in so well.

As mentioned previously, there is a bunch of heroes to choose from. There are many companions you can find to accompany you on your journey. There are over 130 different cards for you to find. The game currently has 35 achievements, this could increase as the game takes its road down the Early Access highway. Draft of Darkness will give the player many hours of enjoyment.

Draft of Darkness is a cracking game which whilst playing, reminded me of games such as Slay the Spire, Darkest Dungeon, and Griftlands. If you enjoy games like these, then this will definitely scratch that itch for you. The graphics felt pretty unique to me, whilst the gameplay itself didn’t feel that unique, but, that doesn’t take away the fact this is a very enjoyable game. Crawly Games have done an absolutely astonishing job on this game, especially for a one-man team! As this is in Early Access, we don’t give games an award. However, if I were to give Draft of Darkness an award, it would most definitely earn the Thumb Culture Gold Award.