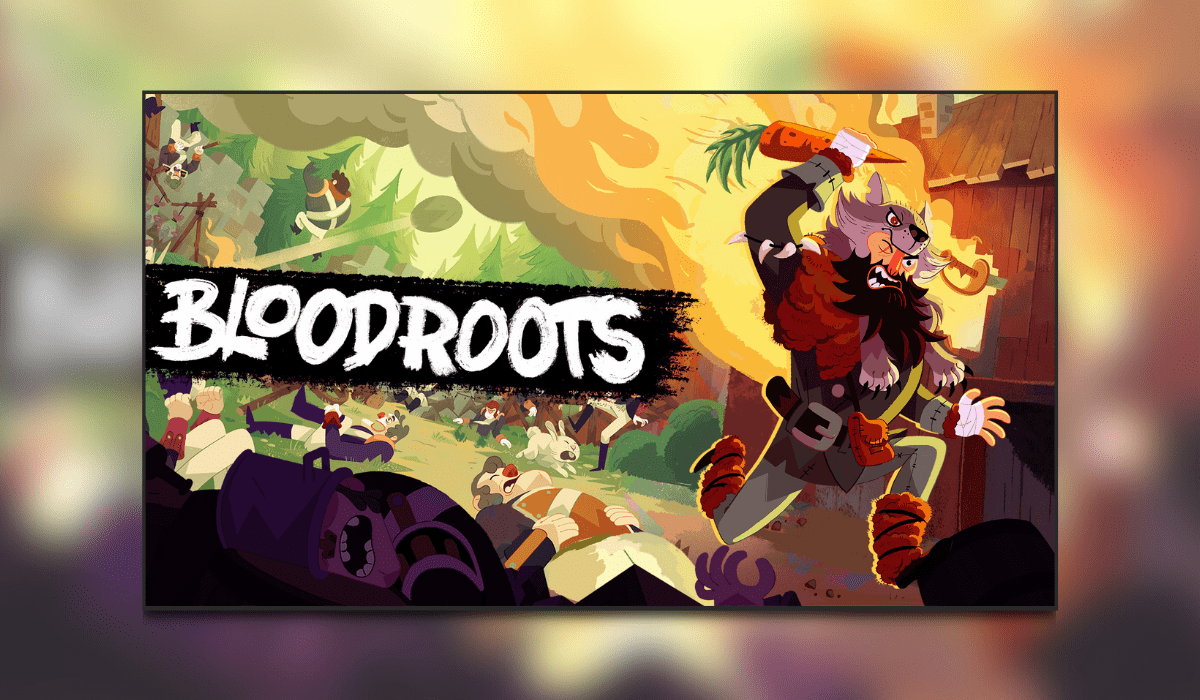 Welcome to my review of Bloodroots. Developed and published by Paper Cult Inc, which is known for Fat Mask and is an indie game developer based in Montreal, Canada. Bloodroots is an action-packed game where timing is key in your survival to progress through the game whilst taking down foes.

Bloodroots – Take Down Your Foes With Anything You Please

The chosen platform here was the Xbox Series X. This is with thanks to it being added to Xbox Game Pass on the 15th of July. If you enjoy this review please check out my previous review here, where I played Open Country on the PlayStation 4. We’re also very active on social media, you can find our links down at the bottom of my review.

We start Bloodroots in a bad way, our protagonist, Mr. Wolf, has been betrayed by his clan. But all doesn’t go to plan for them and Mr. Wolf survives his terrible ordeal. Left for dead, beaten, bleeding, and brusied, Mr. Wolf soon awakens to realise he needs to take revenge on these once-were-friends named The Blood Beasts. These traitors are spread around the location of the game named Tarrytown. We must progress through the town to find each of the traitors and take them down.

Ok so I don’t want to delve too much into the story, so that’s the basic gist of it. Friends turned foes, find the foes, take them down. Of course, there is an in-depth story here, but that is most definitely one for you to find out yourselves.

This game has absolutely hilarious moments in it, some of the weapon takedowns actually had me laughing out loud. Here’s one below, where I had a cooked chicken and used it as a weapon.

There are plenty of moments like this, including one with a catfish which had me laugh out loud, hard. Some of the takedowns are quite brutal also, to the point where I kinda winced in my chair and said “ouch” out loud.

Parents will be pleased to know that you can turn the blood off in this game. Of course, I left it on, but I think that it’s great there’s an option to turn it off. Makes it a little more child-friendly, not that a game about slaughtering foes is child-friendly, but you know what I mean.

The main premise of the game is to grab items and take out your enemies as fast as possible before they manage to get the drop on you. Bloodroots also features a one-hit death throughout the game. Literally, one hit from anything and you’re dead and must start that area again. However, there are plenty of automatic checkpoints as you progress through the game. This definitely helps alleviate your stress from being stuck in a certain area. It is definitely most welcomed to have these frequent checkpoints. You will need them. Well, I did.

Weapons in the game have various uses also. For example, if you pick up an oar, you can use this to vault to higher areas. You take down the enemies there, then vault higher again. Grab yourself a sword, you’ll be able to rush forward faster than normal and take down anything in your way. There are so many weapons I could be here all day listing them down. Here are a few:

Each weapon also only has a certain amount of uses before it breaks. I like this mechanic as it makes it tougher for the player, otherwise, you could just find the best weapon in that area and take them all down real easy. Where’s the fun in that?

Speaking of fun, this game is definitely not short of fun. From start to finish it’ll either have you laughing, wincing, on the edge of your seat, or 2 inches from your screen as you concentrate to get that perfect flow on an area to defeat the enemies in there to be able to continue. The length of the game is perfect. It is just long enough to not have you getting bored. But at the same time not short enough to make you think “oh, was that it?”.

The game has a number of “Acts”, each act has a number of chapters. Between the acts, we also have bonus levels that have us taken down Dummies as fast as possible. Think of a time trial, or, speed-run. Each level, including these bonus levels, have worldwide leaderboards on them. So you could even try to speed-run the game, whilst getting the highest score to become the greatest Mr. Wolf in the world.

Can you become number one? There’s only one way to find out. Download the game on Xbox Game Pass now and start taking down those foes!

The graphics have a great vibe to them. It’s colourful, the art style fits the gameplay perfectly, it runs absolutely fine with zero frame drops. The only issue I experienced during my gameplay was screen tearing. However, this wasn’t a problem, I soldiered on and soon enough I phased it out. The gameplay makes up for this, a lot. You can see the graphics in the above video and screenshots, as well as a bit more of a close-up shot of Mr. Wolf and the detailing on him below.

Now I move on to the audio. Where do I start? The background music. It’s incredible. The game has real upbeat music and the sound effects are amazing. In fact, I am going to say this game has the best music I have heard in a game for a long time. It sounds so unique to me. It just fits in so well whilst you’re destroying the hopes and dreams of your foes.

The main story will take you around 10 hours to complete. This, of course, is depending on how well you progress through the game. The game has hidden wolves placed around that the player can collect. If you missed these through your playthrough, then you can go back and play levels again.

Paper Cult Inc has absolutely nailed it with this game. Everything about it is brilliant, the gameplay, graphics, and audio. They all just hit that sweet spot for me. As mentioned there is a bit of screen tearing on the Xbox version. But that really does not bother me as the rest of the game makes up for it. This game is a true gem and the only regret I have is not playing it sooner. I give Bloodroots a well deserved Thumb Culture Platinum Award.