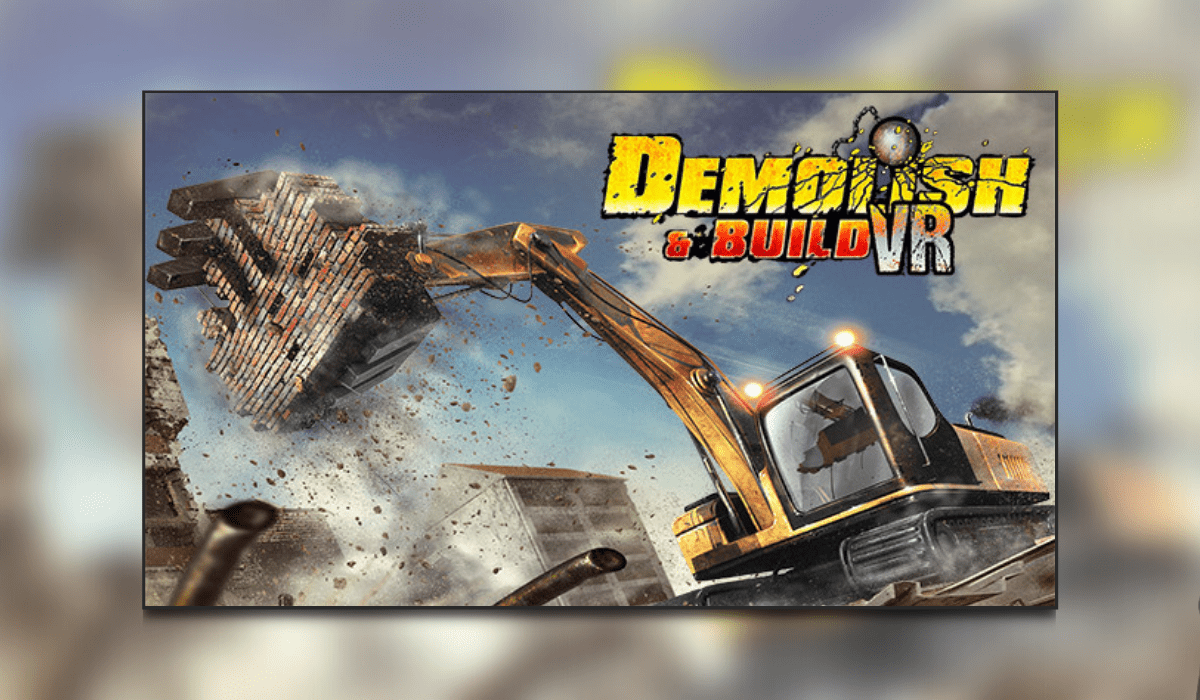 Demolish, construct and grow your business! Developed and published by UltimateVR. You are thrown into the world of a construction simulator. Welcome to Demolish & Build VR

Is it the foundations of something great or simply still half-built?

Why not check out our previous review of Demolish & Build from the 2020 console edition here.

Following in the same footpath as the original PC and console versions we start at the Casino. The opening scenes are some communications between us and the oddly scripted “Boss” figure who seems to have the same amount of business knowledge as I actually do. We are given our first tasks and somewhat left to our own to get on with them. It starts simple enough, pull out wires and discard some stools in the skip. After completing this we then move to the next tasks which are demolishing walls and 2 lion statues on the roof.

Now. Demolishing walls in VR for the first time was about as amazing as that sounds. This quickly changed however as you can only interact with the highlighted areas. This does make sense to the style of the game however I found this to be a constantly breaking emersion. Once 2 small walls have been demolished we head to the roof and take out the statues and turn in the task.

Surprise, surprise we got it wrong. Well. we didn’t but that’s what the “boss” says and we get sacked. Fear not as a new business partner arrives and sends us some money to go buy an office. From here on we get given a list of tasks and a pickup and are somewhat left to do as we please. I personally would have liked a little more direction here aimed towards completing tasks rather than heading off on a drive for a machine I couldn’t afford.

This does however bring me onto the movement. In-game movement is far too slow, with teleport or locomotion options that change by clicking on the left thumbstick. Both of these options are too slow and left me feeling frustrated at having to move anywhere. There wasn’t a natural pace that flowed with the usual spec of a VR title. Driving wasn’t any better either. If you are not a VR veteran then the driving may leave you feeling a little off-put. Even after numerous attempts at driving the controls would randomly turn or lock and send me sideways even when looking directly at my hands.

One of the next tasks I took was the clear out 2 fuel station bathrooms. From the tiles on the walls to the porcelain thrones. This felt exactly the same as the very first casino task we were given except stood in the bathroom. When trying to remove the tiles however some would be inside the walls or in the ceiling which I was too short to reach ( a tiny 5’10 I’m aware). This didn’t impact my ability to turn in the task however did leave me feeling like I hadn’t actually finished the job.

All my testing was on a Quest 2 via a link cable or through Virtual Desktop. I was left feeling very unmoved by the graphics throughout my gameplay. The loading screens filled with bright whites left me feeling like I’d been hit by a flashbang. I had to read interactions over the phone in a tiny text box on the screen which wasn’t always very clear depending on the background behind them. the worst graphical issue was during gameplay plants outside of buildings would appear through the walls and grass through the bottom of the car when you was slung off-road. The graphics are overall very boxy. It all felt old and recycled content rather than a mid-tier priced game released in 2021.

The audio was also under-par. While encased in VR looking for that being part of the game feel. There is at times an overwhelming amount of silence. When completing tasks the audio cues would all soon become repetitive and left me turning down the headset to lighten the load.

The replayability of Demolish & Build VR is going to vary from person to person. There are tasks to work through for extra cash. A large selection of machines to purchase allow you to take on bigger projects and various tools and vehicles to upgrade. The biggest issue is convincing people to push through the early game repetition to reach that end game fun.

For me personally, I feel like Demolish & Build VR missed the mark. At no point did it get me excited to jump back into and play more of. The overall lack of collision or interactivity was missing and for a VR game. I felt constantly reminded that it was just a game. While being a single-player game there was a noticeable lack of interactions only the occasional interactions with your business partner which you had to read.

After reading our previous 2020 review of the console version. I can see that many of these issues were noted then and have not been changed. Instead, it has been directly ported to VR and branded as a new game. I feel it would have received better welcomes as an addition to the base PC game rather than sold as its own subpar standalone. I award Demolish & Build VR a Thumb Culture Bronze Award.