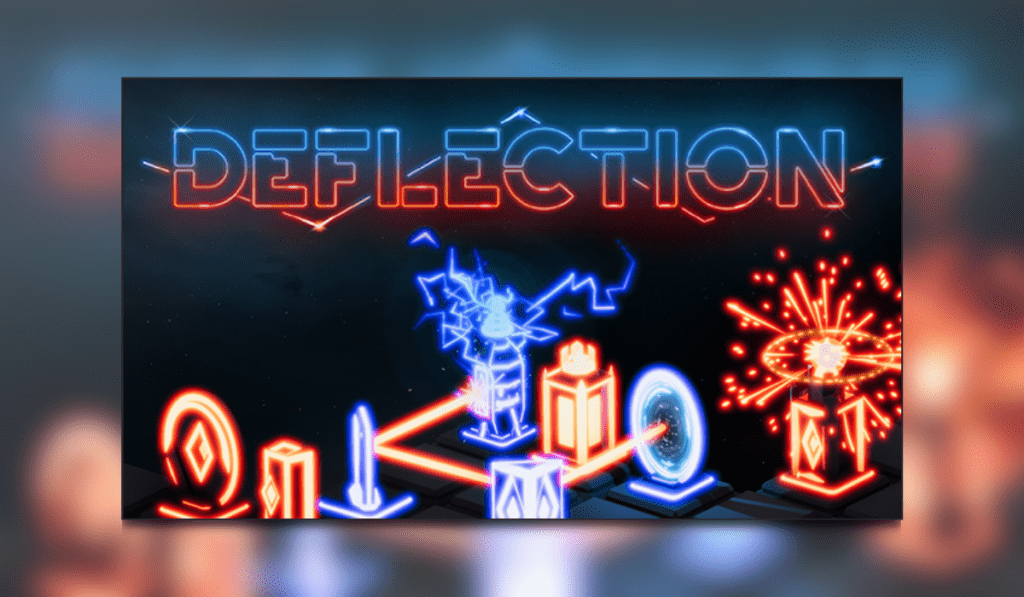 Deflection, by one-man indie studio Coreffect Interactive, is a turn-based chess game with a rather neat strategic twist. Featuring laser turrets and pieces that can alter the way that the laser distributes across the board it is up to you to destroy your opponent’s King.

With its roots in the abstract game of Khet, will Deflection be a nod to the classic or a portal to travesty? Read on!

When I was a lot younger than I am now I can fondly remember spending a lot of time playing Laser Chess on the Atari ST.  Although the gameplay back then was a top-down 2d version, the concept was the same as Deflection.

Against an AI, local or online user, you battle it out on the game board with the sole goal to defeat your opponent’s King.  Taking turns is similar to chess. You must navigate your pieces in such a way that you can deflect your laser beam across the board and destroy enemy pieces.

On the surface, Deflection sounds relatively simple.  However, there are a number of pieces that each affect the laser beam in different ways.  Learning what all the pieces do is taught via the much-needed tutorial.  Just beware of the vulnerable sides!

Starting with the simple Reflector that you can move and rotate to bounce the laser at 90-degree angles this little piece is very effective at deflecting both your own and the opponent’s laser in a different orientation.  I found that if you could get this piece close to the enemy laser turret then you could pretty much control their ability to fire on certain game boards!

Shields are awesome at blocking laser fire while Disruptor pieces send out a signal that when hit disables all of the pieces around it (including yours!).  Shifter pieces are a nightmare and can be used to switch places with other pieces as well as rotated similar to Reflectors.  I found that these pieces really caused a headache at times as they can deflect from both sides!

Similar to the Shield piece, the Sentry allows the laser to be blocked from two sides however it also has a neat little hole in the middle to enable the laser to pass through it.  On one of my games, I managed to stop the enemy laser while on my turn I fired my laser through the hole, successfully reaching the King.  Take that!

Spike pieces, which look exactly like that, are another bone of contention. When hit they split the laser into 4, casting them off across the board. You really must keep your wits about you. I lost several pieces thanks to stray laser beams!

Tesla towers are ruthless when shot, causing a random piece in the nearby vicinity to be vaporised into oblivion. Again this includes your own therefore you really need to stay away from these or be incredibly lucky!

There are a number of other pieces that each put their spin on the game board. Portals, Splicers and Disintegrators all play their roles.  Deflection is far from an easy game and really challenges the old grey matter!

With varied game boards, friendly fire and neutral pieces that can be controlled both by yourself and your opponent. Deflection puts you into a false sense of security very easily. One moment you are working on your plan of attack. The next you have left yourself unwittingly open and you are toast, again!

Have you got what it takes to conquer Deflection?

Deflection has been built using Unity and the simple but effective 3-dimensional pieces look clean and menacing sitting on the game board. Running at 1440p on my 1660 Super, the ultra-quality graphics setting was a breeze. Camera rotations and zooming in and out of the board were met with smooth transitions.

Firing the laser produces a thunderous shaky effect on the screen as the area of interest is thrust into view. The sparkles and crackles of the laser in anticipation of the desired effect occurring!

I must say that I love the upbeat electronic music. It really sends me back to the days of my Atari ST. There is something very cover disk about Deflection that makes me feel like a kid again as it plays in the background.  Sound effects are crackles, fizzes, clicks and dreaded explosions!

Deflection is hard. I struggled at first just playing the AI on the Easy setting while learning the pieces. Against a human opponent, things are a little less predictable for sure. It is so easy to both make mistakes and also not to capitalise on them! Longevity is had not only in mastering Deflection but also in the handy level editor whereby you can design your own game boards and piece layouts!

Deflection is a brilliant take on Khet and I found it to be a rollercoaster of emotions. Just as you think you are getting somewhere, it is so easy for one of your pieces to be suddenly used against you. Therefore, you have to keep running all of the scenarios in your head Dr. Strange style else pay the ultimate price!

For a one-man band, Coreffect Interactive has come out with an awesome puzzle game in my opinion, and receives the Thumb Culture Platinum Award!