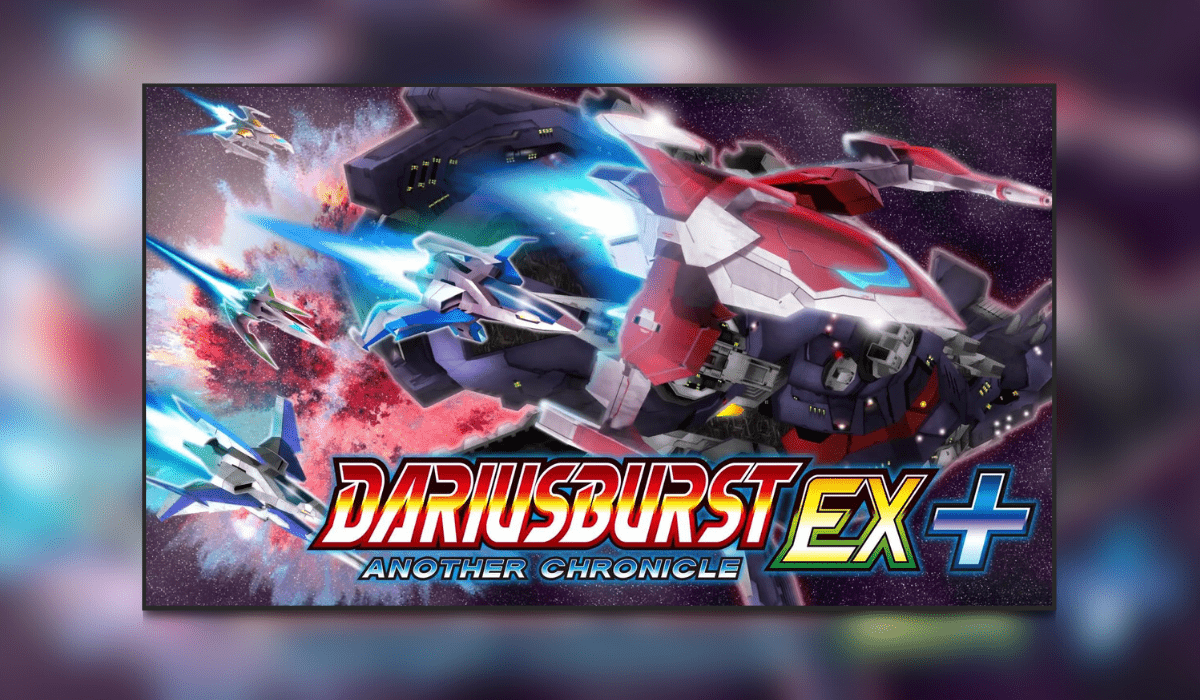 Can you believe that after 34 years Taito is still involved in making (or remaking) Darius games? How have they stood the test of time? What is it about Darius that keeps us coming back for more? Akin to its shmup brethren, R-Type and Raiden who are still going, it boils down to one thing. Replayability! More on that later. Let’s talk about where Dariusburst Another Chronicle EX+ came from.

Dariusburst was originally a PSP game released in 2009. A year later Dariusburst Another Chronicle was released into arcades with an update the following year called Dariusburst Another Chronicle EX. What we are looking at today is an enhanced port of the latter. What I have always loved about the Darius series, their unique selling point is their arcade cabinets. Just look at the beauty of it! Having two or three screens to create that ultra-widescreen just looks fantastic, and feels even better.

Dariusburst Another Chronicle EX+ – Back Once Again With Another Remaster

So almost a year after the Darius Cozmic Collection was released, developers Taito have once again teamed up with ININ games to bring us Dariusburst Another Chronicle EX+ which was released on July 27th on PlayStation 4 and Nintendo Switch. Does this do much to change the shmup formula, or is it the same old same old? Read on to find out. Also, you can check out my review for Darius Cozmic Collection here.

So we all know how side-scrolling shoot ’em ups work right? Fly right, shoot stuff, avoid stuff, save the universe. Well, this one isn’t much different, to be honest, but the burst shot can be very handy to get you out of a tight situation. Much like the ‘bomb’ in other shmups. The burst shot will clear a path in front of you and can be directed. But it still has that addictive element of wanting to better. Experimenting with different ships is half the fun as you will need to battle with pinpoint accuracy and there are nine different ships to try out with different weaponry.

Dariusburst Another Chronicle EX+ has a total of four game modes. In Original Mode, you will pick your starting zone from A, B, and C, and in typical Darius fashion, it then branches out. You can choose a path to take from either of these points. The higher the path you choose will make your life a little easier, and the lower you go it will be harder. for example, the hardest route would be zones C, G, and L. If you complete Zone C, that’s a big if, then you can choose zone F for a slightly easier ride. First off I chose zones A, D, and H thinking this will be fine. It wasn’t. Even that was really hard so be prepared. Once you reach the end of a zone you will have a huge and impressive-looking marine-inspired boss to take out before moving on.

Original EX Mode is much of the same but even harder! The ultimate challenge and it is crazy hard. To get through some of this I did opt to make my life a little easier and enable infinite lives. I wouldn’t have lasted without it. The big drawback of using infinite lives is that you don’t get to be on the scoreboard. Maybe fun for the casual player. This mode is for the hardcore shoot ’em up fans.

Chronicle Mode is a bit more objective-based. Here essentially you will be choosing a star system in which to clear out with up to 4 other players. Saying that it doesn’t really add a lot to the game. It’s just the same gameplay and levels as the previous modes.

Lastly, there is Event Mode. These are score and time attack missions that were on a limited-time release in the arcade. Additionally, there are new missions added for this EX+ package which is great for those familiar with the original arcade game.

As usual for Darius games, the controls are exceptionally precise and will take some mastering. The burst shot can be particularly helpful, as is being able to turn your ship to face the other way to shoot what is incoming behind you. his is pure arcade gameplay though and the main appeal is simply to get further than you did last time for that sweet high score.

Graphically it is crisp but because of the nature of how it was presented in the arcade with multiple screens, I’m not sure the 32:9 ratio really suited it. Fortunately, I have a big TV and was able to play it fine and appreciate all the detail that had gone into the bosses. If you were playing this on anything less than a 40-inch TV you might just struggle a little bit.

The music however is phenomenal. Some of it could easily be placed in some epic Anime. A lot of it is pure madness but I think it suits the game really well. It can go from a soothing female vocal to a heavy floor beat in a matter of seconds. I loved the soundtrack enough to seek out the soundtrack from the original arcade version by Taito’s house band Zuntata. Their other works include Space invaders and Arkanoid. I highly recommend you check them out if you like your house music with a smidge of synth-pop.

Dariusburst Another Chronicle EX+ doesn’t really have an end as it was designed to make you keep pumping money into the machine. That said, the game is as long as your sanity can last with endless deaths and defeats. If you’re a score chaser then you will love it, otherwise, there isn’t really a huge amount to keep you coming back to it. I am sure there may be a story lying underneath, but with so few modes and them basically all very similar, there isn’t a lot to keep you occupied.

I award Dariusburst Another Chronicle EX+ a Platinum Award…just for the soundtrack. But, I have to take the whole game into account. While the bosses are wild and fun to take down, it is too repetitive with very little in terms of variation. While the bosses are great, the smaller enemies just seem to be a little generic.

The gameplay is solid though and will keep those searching for a high score coming back. That being said, there is more fun to be had with the Darius Cozmic Collection just because of the variation. Again, I think the game could have benefited from changing the screen aspect ratio to have more on-screen. It looks like you are missing a lot. I get why they did it to stay true to the original, but it seems to take away more than it adds.