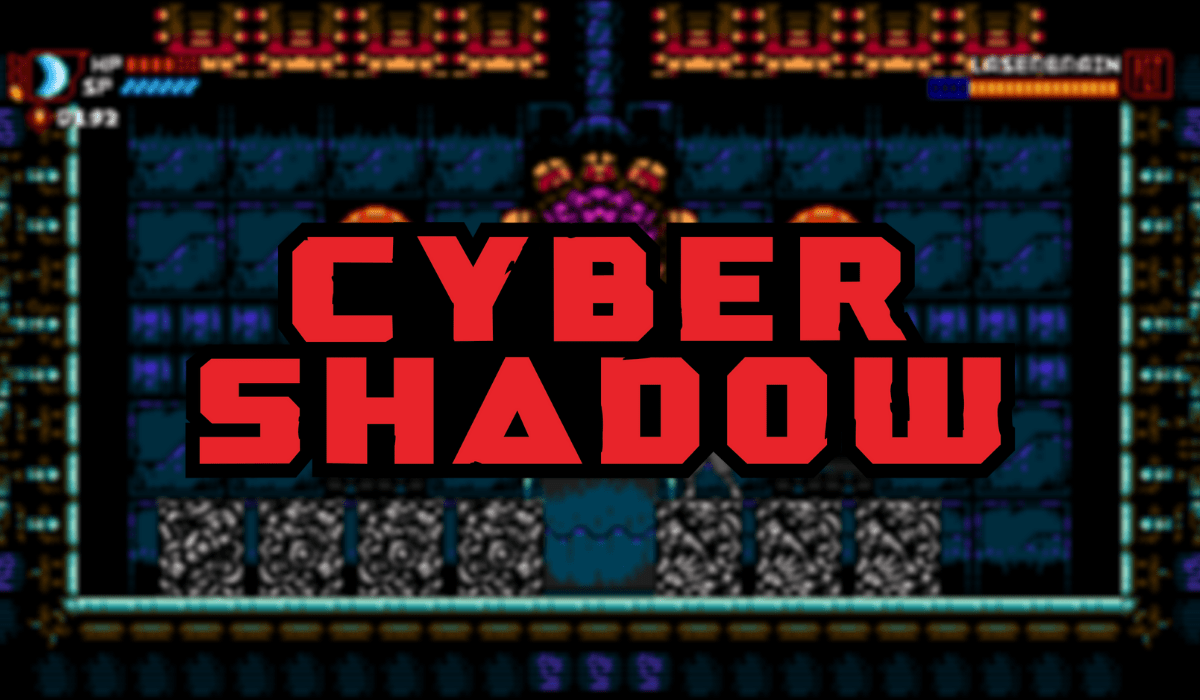 Cyber Shadow is a side-scrolling action-platform game brought to us by developers Mechanical Head Games and publishers Yacht Club Games. Cyber Shadow is available on Steam, Nintendo Switch, PS4, PS5 and Xbox One (via Gamepass I might add).

Cyber Shadow takes me back to the glory days of similar games on the Sega Mega Drive (Sega Genesis to some) and the Super Nintendo. Come see what I really think of the game. If you enjoy this read please check out my previous article here.

Immediately the player is greeted by an incredible 8-bit menu with a matching soundtrack. I am already in love. The game is challenging, but not in a way that would leave you pressing ALT+F4 followed by uninstalling the game.

The protagonist in Cyber Shadow is called Shadow. Shadow is the sole survivor of his clan taking on one final mission to discover what started the perpetual ruin of the world. Shadow has a robotic companion called L-Gion who is your only guide through the now destroyed Mekacity.

As you progress through the levels, you’ll encounter more challenging enemies and bosses. Some of these enemies have weak spots such as a fuel tank on their back. TIP – Please take note of this, you will not regret it!

Cyber Shadow rewards the player with points which are the game’s currency for purchasing upgrades for Shadow. These can range from health regen to more powerful weapons. Shadow can also have his HP and SP upgraded to give you more of a fighting chance later in the game, as well as use more of your special attacks such as Shurikens or Kunai.

There are more than a dozen apocalyptic bosses to take on during Cyber Shadow, all of which are unique and have some incredible design work on them. Such as the below boss, Laserbrain. Each boss takes a particular technique to beat them. This can vary from jumping over their attacks to using chunks of scrap that are being spawned to be able to reach the enemy to attack, and more.

The graphics, to me, are pure class. They take me back to the olden glory days of gaming on the Sega Mega Drive, games such as E-SWAT come to mind. Pixels everywhere, but that’s not a bad thing, the graphics match the gameplay along with an awesome soundtrack and sound effects. Of course, it runs perfectly on PC which was my platform of choice.

Even on a larger screen this game looked fine, nice and sharp and didn’t hurt my eyes which I used to find with some retro styled games. The sound effects in this game are also top-notch. Each slash, shot and jump are a pure homage to days of old in the video game universe.

Cyber Shadow is a relatively short game at ~7 hours. However, this is a case of quality over quantity and you will not feel disappointed with this game. There’s also a bunch of achievements/trophies to unlock which can help your game last longer and give you more of a challenge.

Cyber Shadow had me gripped from the moment I picked it up until I could finally pull myself away from it. There’s just something about this game that pulls you in. It took me right back to my childhood and being destroyed on games such as E-SWAT and Walker. I highly recommend you check Cyber Shadow out. This game gets a  Thumb Culture Gold Award from me. 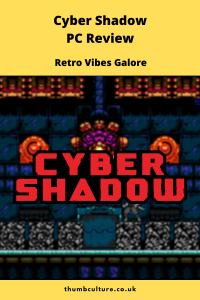