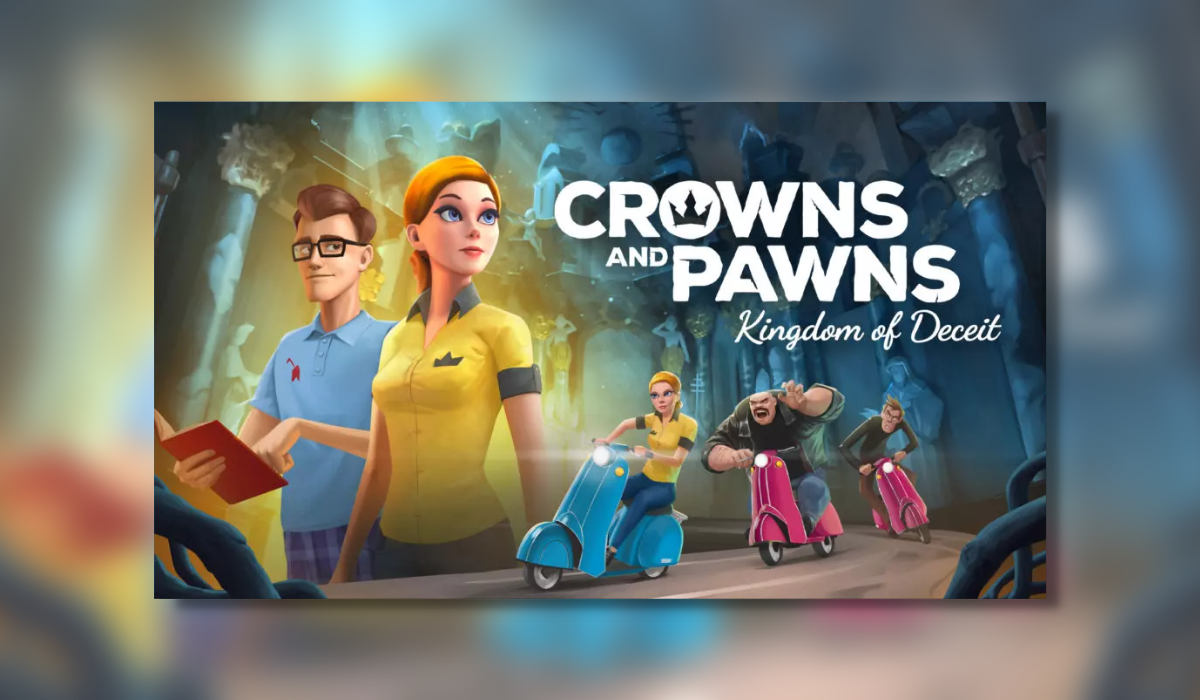 Following the footsteps of the classics and indie darlings that preceded it, Crowns and Pawns: Kingdom of Deceit from Tag of Joy is a modern point-and-click adventure that brings lesser-known European history to the forefront and throws in a good helping of mystery and intrigue.

UNCOVER THE SECRETS OF THE KING NEVER CROWNED

Crowns and Pawns delves into what all vintage adventures do best— mysteries, relics and conspiracies—while still putting its own seal on the point-and-click parchment. Being an unabashed point-and-click and adventure nut in general, this was speaking my language. Naturally, I had to get my hands on it and dive in headfirst.

The story centres around Milda Kovas, a woman living in Chicago who receives a letter informing her that her grandfather in Lithuania has died. In his will, Milda is bequeathed his house and belongings which she must come to Lithuania to collect. However, on arrival, she receives an ominous phone call from an unknown man, demanding she hand over her inheritance. This leads to the discovery of a historical secret and Milda being dragged into a quest for a relic thought lost to the ages.

Like its predecessors, Crowns and Pawns goes for the classic style of using the mouse pointer as your primary interaction tool. It also includes the use of keyboard commands for those who prefer a button to a click. Protagonist Milda has an extensive inventory in which she can store a wide variety of items and combine to solve conundrums she encounters along the way. Also, a modern-day protagonist would be completely lost without their trusty smartphone! With this, Milda can make and combine notes to unlock new information and call/message various contacts (or receive calls/messages from them) to pursue new leads. And of course, Milda can find out interesting information by talking to different people on her journey.

All of these mechanics work perfectly. There’s also a jump-to command by double-clicking on a door or anything that constitutes an entrance/exit. It’s worth noting however that the jump-to command doesn’t work on any other hotspots. And while double-clicking in most point-and-clicks will make the character run, this is not the case for Milda. Running just isn’t her thing. Thankfully each scene is fairly contained, so it doesn’t slow down gameplay too much. There are also some inspired, unique elements that are fun to explore and not normally found in the genre. The game begins with Milda customising a character for an online game, which in turn customises her actual appearance. This is then expanded with an outfit customisation feature, which not only comes into play puzzle-wise but also means you can make Milda the heroine you envision her to be. And yes, I absolutely had a new outfit for her every single day. You can also choose Milda’s profession at the beginning of the game and this brings me to the bulk of any adventure game: puzzles.

The bread and butter of such a title, Crowns and Pawns pulls no punches in this regard. Choosing a certain profession for Milda will not only change her dialogue options but affect her puzzle approach. Puzzles are interesting and suitably tricky but always founded in logic. As all good puzzles should be. Even those that seem far-fetched can be solved by uncovering the right information, through either examining items or talking to the right people. The former is particularly important; some notes vital to game progression are only unlocked through finding specific snippets of knowledge. This almost brought things to a grinding halt for me at one stage as I had missed something and couldn’t progress.

As mentioned in the opening, European history plays a big part in the game’s plot, as it did in the likes of the great Broken Sword franchise. In fact, director Charles Cecil had a very positive reaction to Crowns and Pawns! The history of Lithuania is explored here, predominantly the Grand Duchy of Lithuania and the uncrowned King Vytautas. Milda uncovers real facts about ancient figures and visits real locations in the capital of Vilnius. Architecture is accurately depicted and puzzles are integrated remarkably. It genuinely inspires an interest in more obscure European history and the nation in general.

However, while these historical elements are explored well, the fictional side has a couple of niggles. Some key plot points are a little glossed over and rushed, possibly due to game length. Most of this becomes evident in the final act. Moments that should be pivotal or carry more weight feel a little hollow. The mysterious antagonist is also given very little development. Even though there are references to their supposed objectives, you can still be unsure what their motives are. Granted, the game’s tone is more light-hearted, but fleshing these aspects out and having moments hit harder would add just that little more depth. And sadly the ending does wind up being rather anticlimactic and underwhelming; all the hallmarks of one last big puzzle to complete are there, only for it to simply be a cutscene instead.

Crowns and Pawns opts for a mix of 2D and 3D with regards to visuals. Beautifully hand-painted 2D scenes bring the various locations to life in vibrant colour. One particular scene inside a church is quite breathtaking! Characters and animation are rendered in 3D with an animated, cartoon-esque feel. This can feel a little jarring to begin with, but the animation is very smooth and the characters expressive without being too exaggerated. Changing Milda’s appearance also works exceptionally well. With character customisation, there is always the risk of one particular hairstyle or item of clothing experiencing clipping with the character model or environment. None of that here; all of Milda’s customisation options are a perfect fit and look wonderfully slick.

Sound design is also strong with a varied and satisfying soundtrack. Occasionally the music can threaten to overpower the voices and effects, but this is easily rectified in the options. A good thing too as the voice acting is where the game truly shines. The performances are first class, particularly from the leads. Erin Yvette is fantastic as the sassy, inquisitive Milda. Many times I found myself examining things just to see what she would come out with. Paired with Elizabeth Allen as best friend Dana, there is tremendous natural chemistry that flows through the interactions and makes for some genuine belly laugh moments. Matthew Curtis also does a stellar job of embodying the intelligent and charmingly awkward Joris. He’s the cultured adventure buddy and smart, excitable cinnamon roll everyone deserves in their life. Both Yvette and Curtis convey a marvellous friendship renewed. Some wonderfully warm moments come from just the smallest quips and inflections.

As alluded to earlier, this is another minor area which falls short, literally. Excluding the more difficult puzzles that can take up considerable time, the game averages at around 4 hours, more if you decide to examine every nook and cranny. Certainly not out of the ordinary for an indie title, but given some of the rushed elements, it feels much shorter. There is some replay value in choosing a different profession, but ultimately, it still feels like it ends before it truly begins.

Despite the short length and hurried plot points, Crowns and Pawns: Kingdom of Deceit is still an extremely fun adventure that fans of the genre will love. Puzzles are logical, characters are full of charm and personality and the blending of history and fictional intrigue is genuinely engrossing. It’s definitely worth adding to your point-and-click library and a future sequel would certainly be welcomed. Even if only to borrow more money from Dana and take cinnamon roll Joris on more “criminal” activities.

A shiny Silver Award for this entertaining escapade!

One thought on “Crowns and Pawns: Kingdom of Deceit Review”