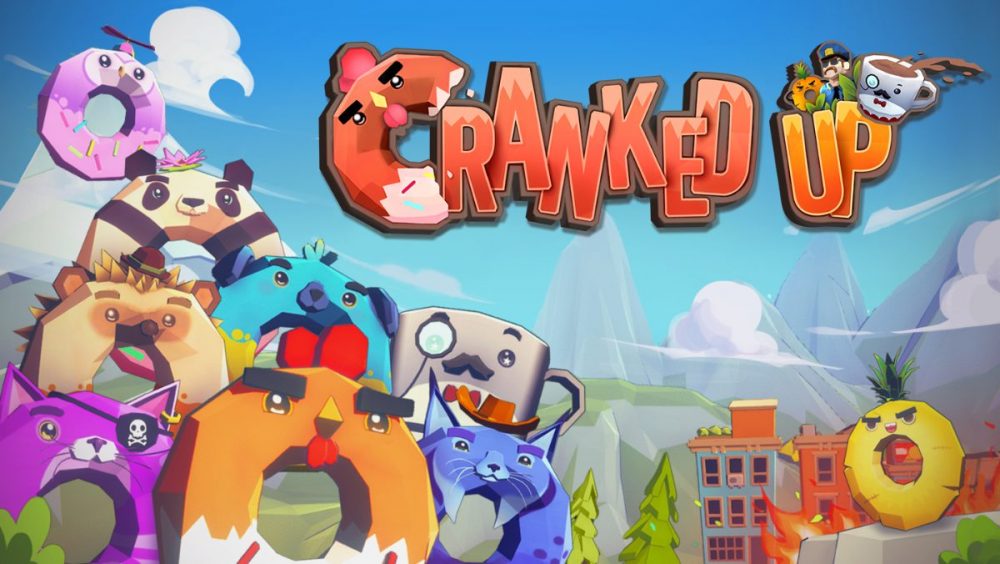 BBlack Studios bring us Cranked Up, the mesmerising adventure of a doughnut trying to get dunked into coffee. If that isn’t enough to sell a game, then I dunno what is. Actually in hindsight, I don’t like coffee, but I’m all over the sugary goodness that is doughnuts. So I decided to pop to the local doughnut shop and stock up for the adventure of a lifetime, and probably gain a pound or two as well.

I honestly do’nut know where to start with this. Cranked Up has left me in a little bit of a state if I’m honest. I kind of feel like I took a lot of acid before I had sweet cravings and the result may just have been the inspiration for this game. After several hours of phone-based therapy at huge cost I feel like I am now human enough to continue.

Fortunately there is a tutorial, always a fan of the tutorial, so I learnt how to move. Cranked Up is best played with a controller, so I dutifully plugged mine and it seemed to work. You play the part of a giant doughnut. There are 2 rockets attached to your doughnut, these are always pointing upward, unless I contradict that later. Press R2 to fire one rocket, and L2 to fire the other. Firing the rockets will make your doughnut roll, firing both at the same time will make your doughnut stop, as the rockets both face the middle for some unexplained reason, and don’t still face up and launch your doughnut into space.

You with me so far? You are a giant doughnut with rockets attached. I really wish I’d been at the brainstorming for this.

The aim of the game is to dunk yourself into a cup of coffee called Mr Mug (He’s your favourite mug of coffee). Once dunked, Mr Mug gets kidnapped (by a crazed pineapple slice) to a new location and you start all over again.  This is child’s play, surely. Roll around the various obstacle courses, jump over things and collect the sugar boosts that are littered around. Hit the wrong objects and you will die. There are springs that will bounce you higher, traffic that will run you over without a moment’s notice and spiked fences that will impale you like a giant doughnut kebab. (Watch kickstarter for my new doughnut kebab venture.)

Cranked Up is a simple game to understand, but can be frustrating and anger-inducing. Anger not at the game, but at yourself for pressing the wrong button and sending your doughnut spiralling the wrong way. I quickly found that the best way to turn round was not to press the other button to fire the doughnut back again, as by this time it had already done a half rotation and the other rocket just fired it the same way, but to just press both buttons, look at the doughnut and then release the button the same side you want to go. Quite why we need to be a rocket-propelled doughnut is anyone’s guess, but I an assuming that in the quest for uniqueness it might have been better that a kipper fired from a grenade launcher or a giraffe on a unicycle, but it’s a fine line.

Like all games, the more you play Cranked Up, the better you get. Eventually, I had a modicum of control over my doughnut and it obeyed my commands.  The levels get increasingly trickier and new obstacles get brought in from time to time. The levels are not monstrously long, so after a little persistence you’ll be on to the next one. There is the equivalent of an end of level boss though, make sure you have your wits about you and know your right from your left under pressure. Finishing the boss level was the only time I actually was pleased with myself and not just relieved.

When I play a level based game I like to feel a sense of achievement, what Cranked Up does is provide a sense of relief with every doughnut that gets dunked. To me, this shows that there is more frustration than enjoyment, and this puts people off quickly. There are areas where accuracy has such a narrow margin of error that dying becomes a regular occurrence. Surely make the harder areas places that you can not die and deaths based on silly mistakes. Getting thrown back to the beginning of the level is a harsh punishment. Fortunately, there are checkpoints along the way though, so death isn’t always as bad as it could be. I also found myself stuck on some levels with no way of escape. This is really inexcusable, QC needs to revisit some areas.

Cranked Up is about a rolling doughnut. What you get is pretty much what is expected. You’re in a cartoon world with cartoony cars, buildings and trees. The obstacles are all very clear and being a 2D platformer, what you need to do and where you need to go is fairly obvious. The graphics bring the real fun element to the game, it’s definitely a world where I would get onboard. I mean, you had me at ‘Giant doughnut’. I’m not sure a post-apocalyptic setting would work. There are different biomes to unlock for a different feel to the game, and there are a few different skins for your doughnut as well. There is a slight issue with the rockets moving around the doughnut, this doesn’t affect gameplay, but does make it look a little weird. When rolling, the doughnut rotates at a different rate to the rockets.

Cranked Up provides us with easily the most forgettable soundtrack that I have ever forgotten. I had to go in several times to actually remember what was going on in the background. It neither adds to the atmosphere of the game, nor detracts. It’s essentially the lukewarm of the water world. There is no anticipation for the end of the level, no excitement lifting changes in tempo or volume and no real purpose to it. There are some cute little ‘Boing’ sound effects though whilst manoeuvring over the world map. the emphasis is definitely the gameplay and the audio is all filler.

Cranked Up is the sort of game that really doesn’t have a return to factor. Getting all three sugar boosts on the level is the only challenge. Once complete there is nothing else to achieve or frustrate yourself. You can always try and complete every level without dying. Unless BBlack Studio add more content over time then Cranked Up would be a ‘do it once’ game, or in my case, try it once. I appreciate that this is early access at the moment, and some things might change, but I am unsure exactly what will be done to improve things.

Cranked Up has some potential, the unique way that the game is put together, whilst being its positive aspect, is also it’s downfall. The level of frustration with some of the levels was excruciatingly painful. It truly left me with a sense of hatred I haven’t felt since Martin Kingston opened my mint condition Star Wars Yoda from 1982. I was hoping that Cranked up would be akin to A New Hope, but what I got was a Rise of the Sith. The dark side was strong with BBlack Studio, and they used it well. There is still potential there, but it needs to be released. As far as I can tell, Stephen King knew exactly what to do with rolling doughnuts, and that hasn’t changed.