Produced single handed by András Illés, Computer Tycoon is a foray into the world of building computers. The aim of Computer Tycoon is to dominate the global markets in all forms of computer production. Time to see if it is cooler than super-cooled or overclocked and overheated.

So jumping straight in and avoiding the ‘easy’ difficulty setting I chose my avatar, a slick 70’s throwback and I named my company. Time to get building computers. The first screen you are met with is a map of the world. On top of this is the advice you need to be successful. Build in 2 countries, create your computer and then start the clock. 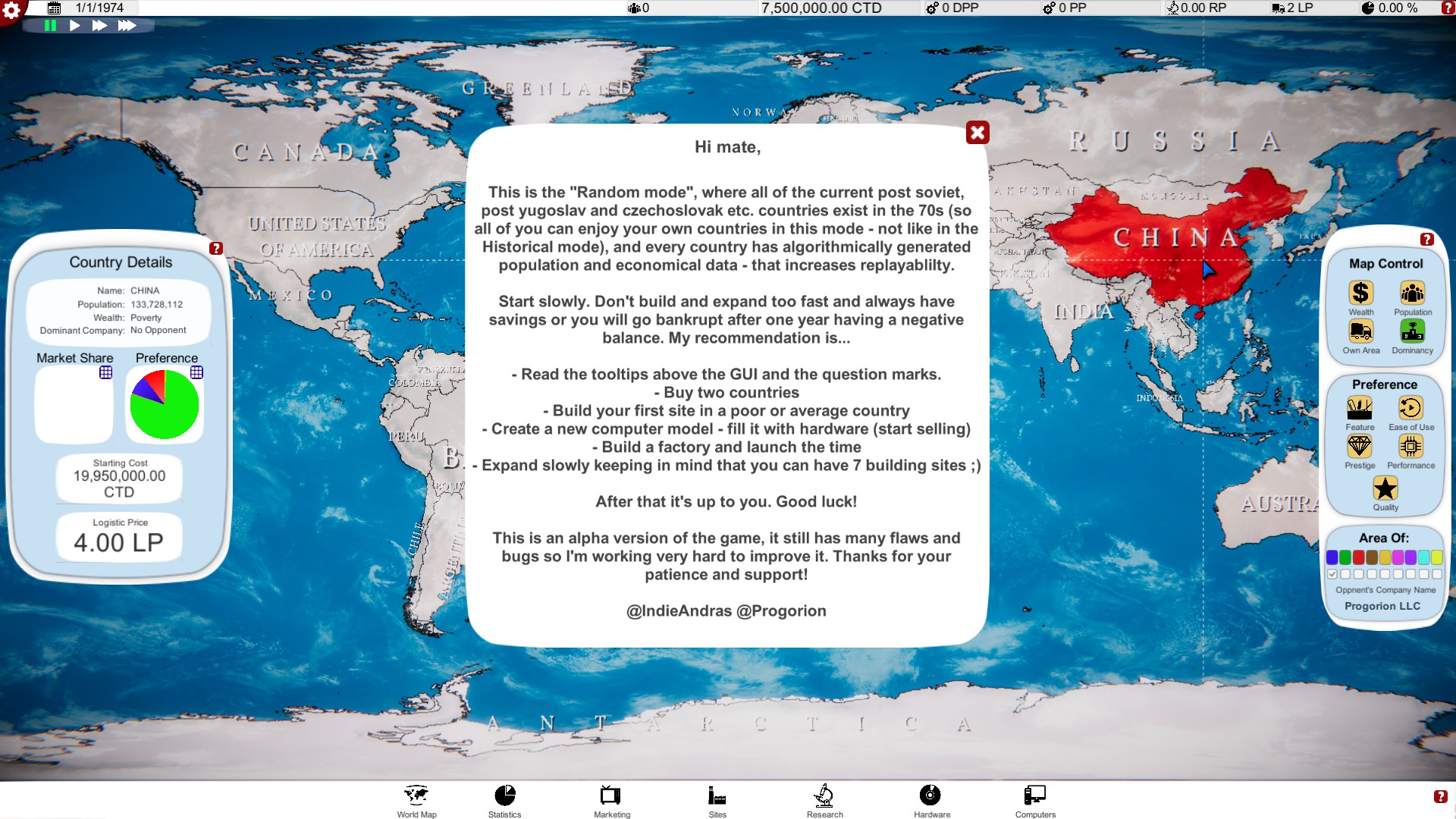 I chose Italy because the women are pretty and I like the word “ciao”, not that I would be having much to do with the women being a 70’s throwback with the geekiest look ever. So I build things on my site, a factory, an office, a logistics department, a coffee bar, a small version of the statue of liberty (OK, that last one was made up, wrong game). Now what? I clicked on the buildings after they had fully risen from the ground. This didn’t do anything. I upgraded my factory even though it wasn’t building anything, you never know, this might just be a genius idea. Eventually I found some icons at the bottom of the screen, research, hardware, computers, marketing, this had to be where the magic happened. I selected computers. I couldn’t build one because I needed hardware. Rookie error I guess. Hardware, add new stuff. Tweak it until you like it and compromise cost with efficiency. Build a few variations as people want different aspects from their computers. Now head to computers and build one with your new amazing hardware. 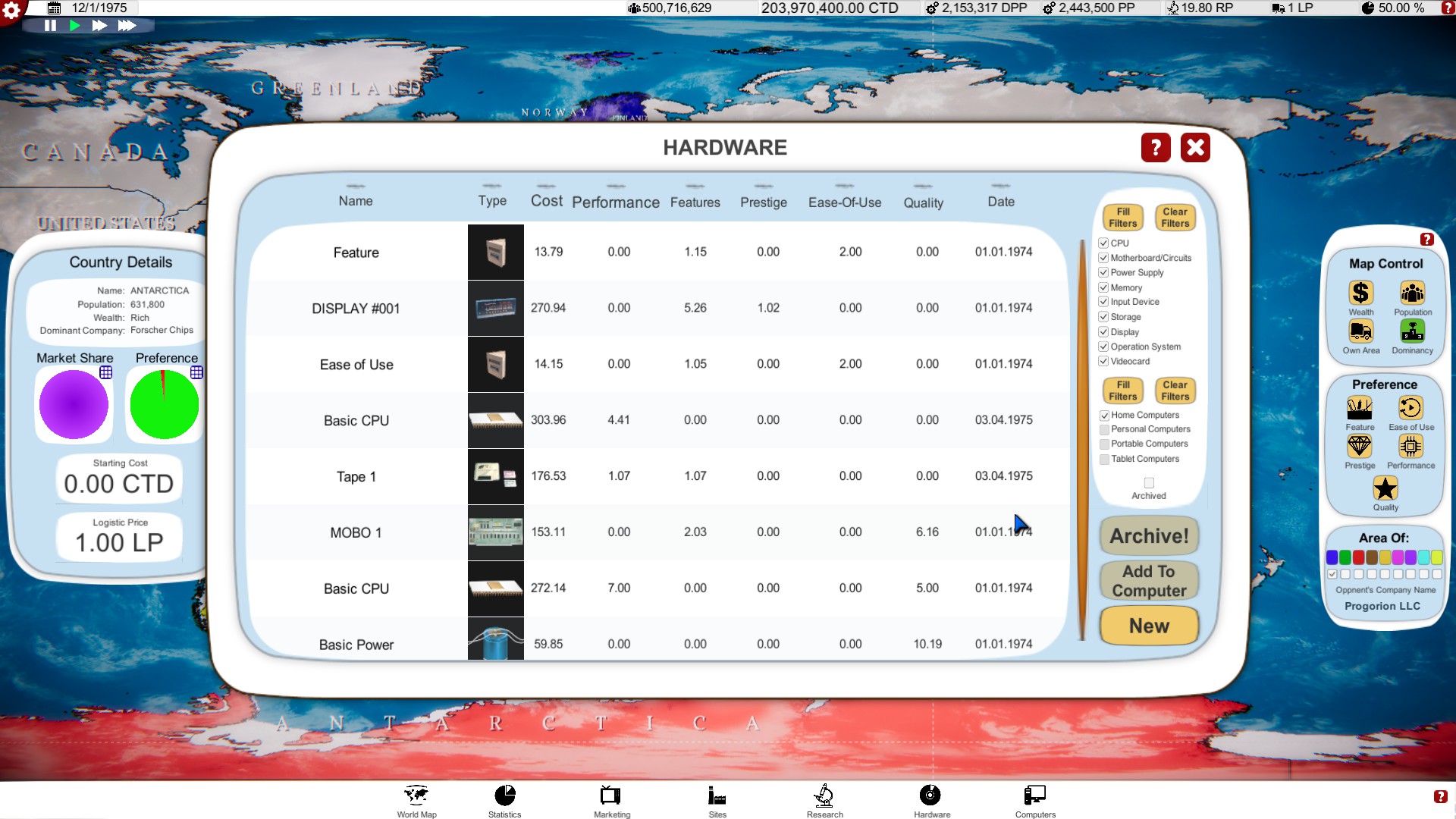 This lot should do the trick.

This game follows the research then build model that almost all tycoon games follow. You have to think before you commit. Most people who have played any kind of tycoon game will have this one nailed in a few attempts at worst. The one aspect that stand out for me is the fact that you have to buy the rights to sell in different countries, and these countries have different needs in their computers. It’s not just going to be a case of one size fits all. The bigger the country’s population, the more it costs to get the rights. Build up research points, build up logistic points and make sure production exceeds demand. This is basically the whole game. Spend money to make money, speculate to accumulate. 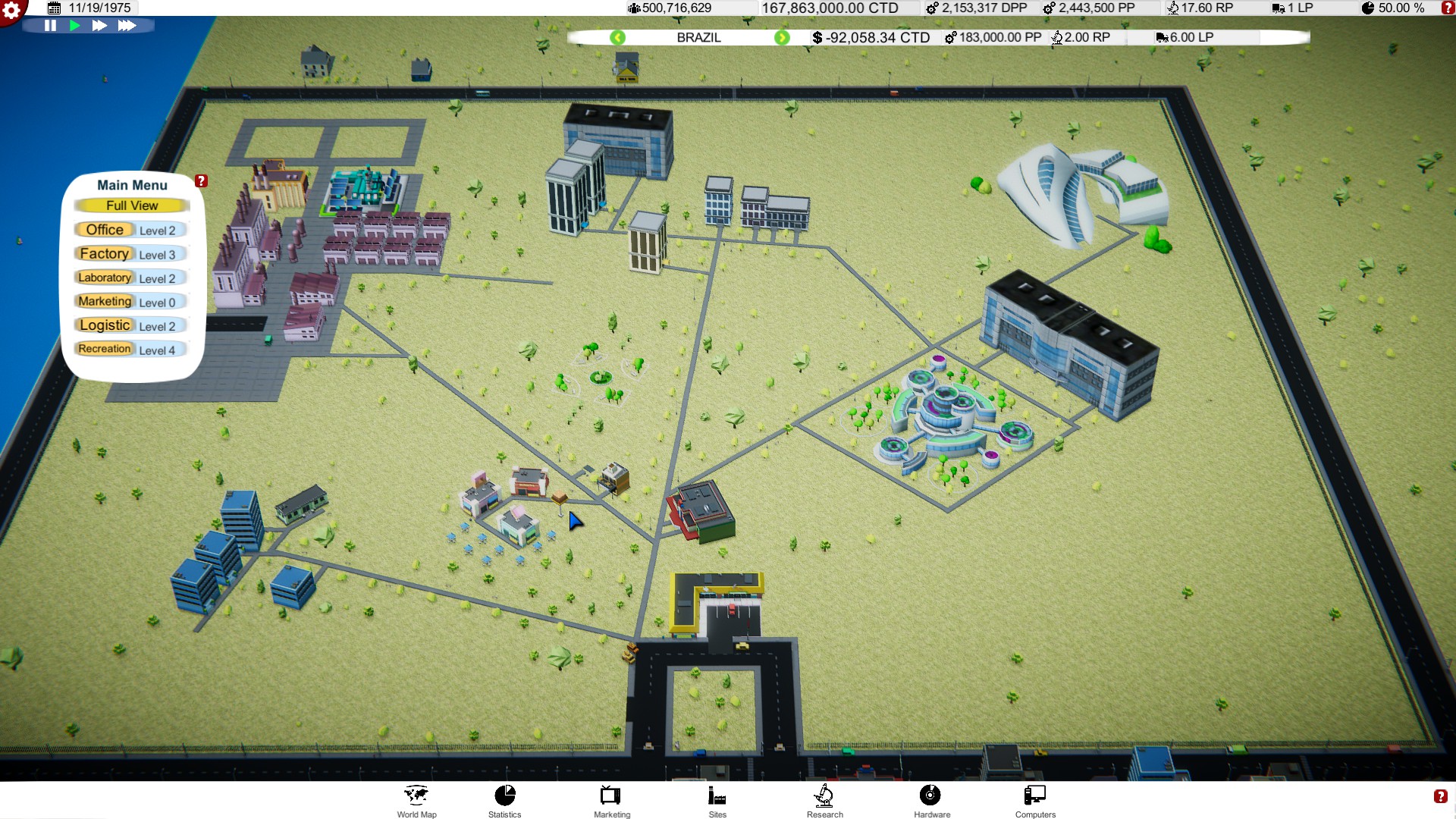 Where should I build the tennis court?

This is an Alpha of the full game so I gave some thought about where the game could go. Certainly nothing is really missing from the gameplay, well maybe the instructions, but it’s nothing a clever person can’t work out. The game is fairly easy and no real knowledge of computers is essential. Build slow and stable and you should win every time. The decisions that you make don’t seem to overly affect the gameplay. There’s no research trees so to speak, but they should be easily implementable. I am very curious to see where this game goes and will be keeping a close eye on updates. 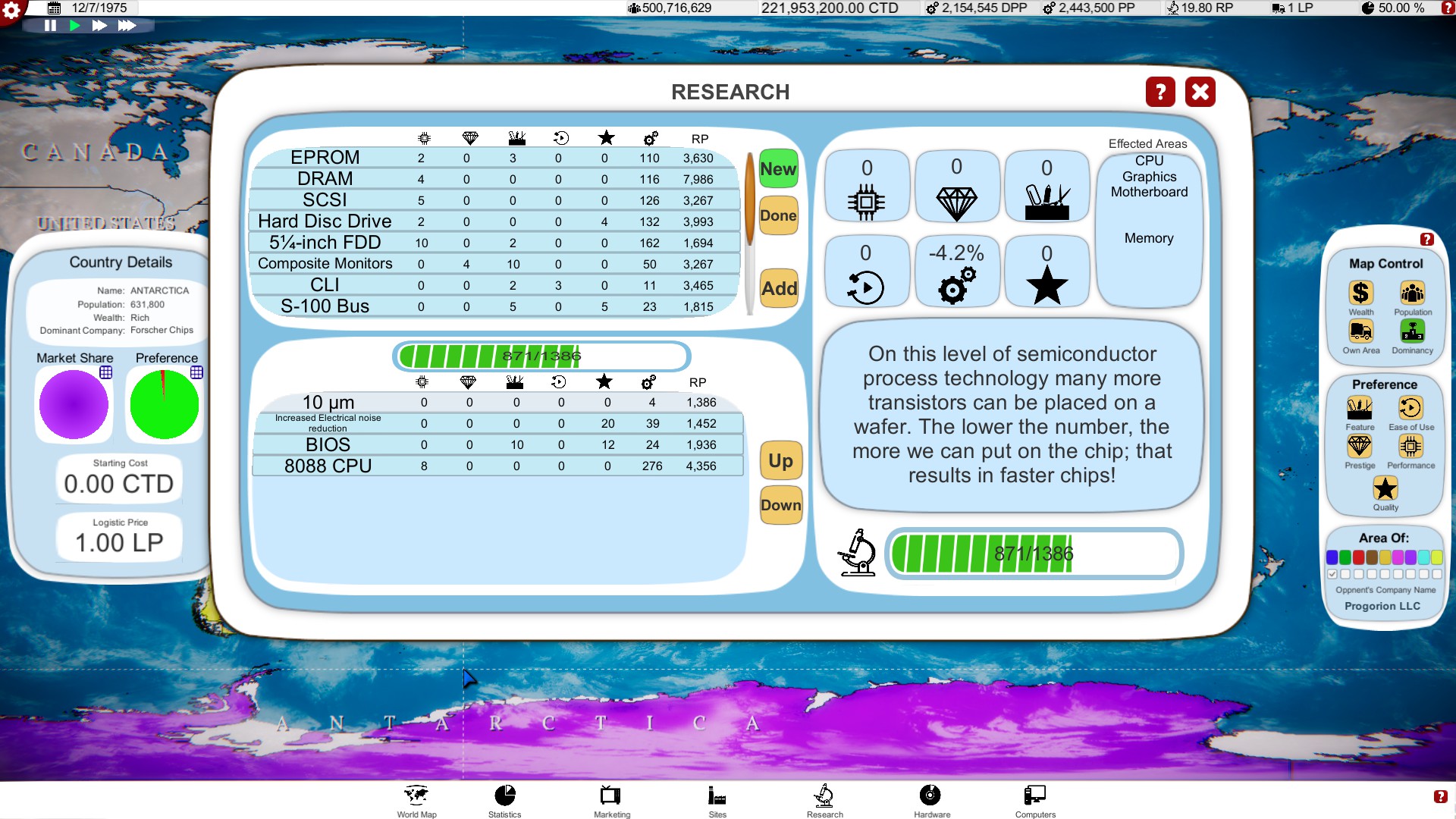 So much to learn, so little time to learn it..

At the moment it is not really like playing a game, it’s more a case of repeating the same actions over and over until domination is yours. I would like to see more strategy come in to play. More interaction with the enemy, I mean competitors, would be a good start. Plan your global domination, restrict countries you can sell in by having to meet certain criteria, not just buy the rights. There are lots of places that this game could go, so if you are a tycoon fan like me it may well be worth keeping a close eye on this one.

Computer Tycoon’s graphics are cliché retro. Retro enough to appreciate the starting year of the game, but also not great in their own right. Do all CPUs look the same? Well I don’t know I can only look at one and that’s about it. They do the job and will not detract from the overall playing experience. I don’t know whether these are going to be looked at, but I would rather see the gameplay develop. 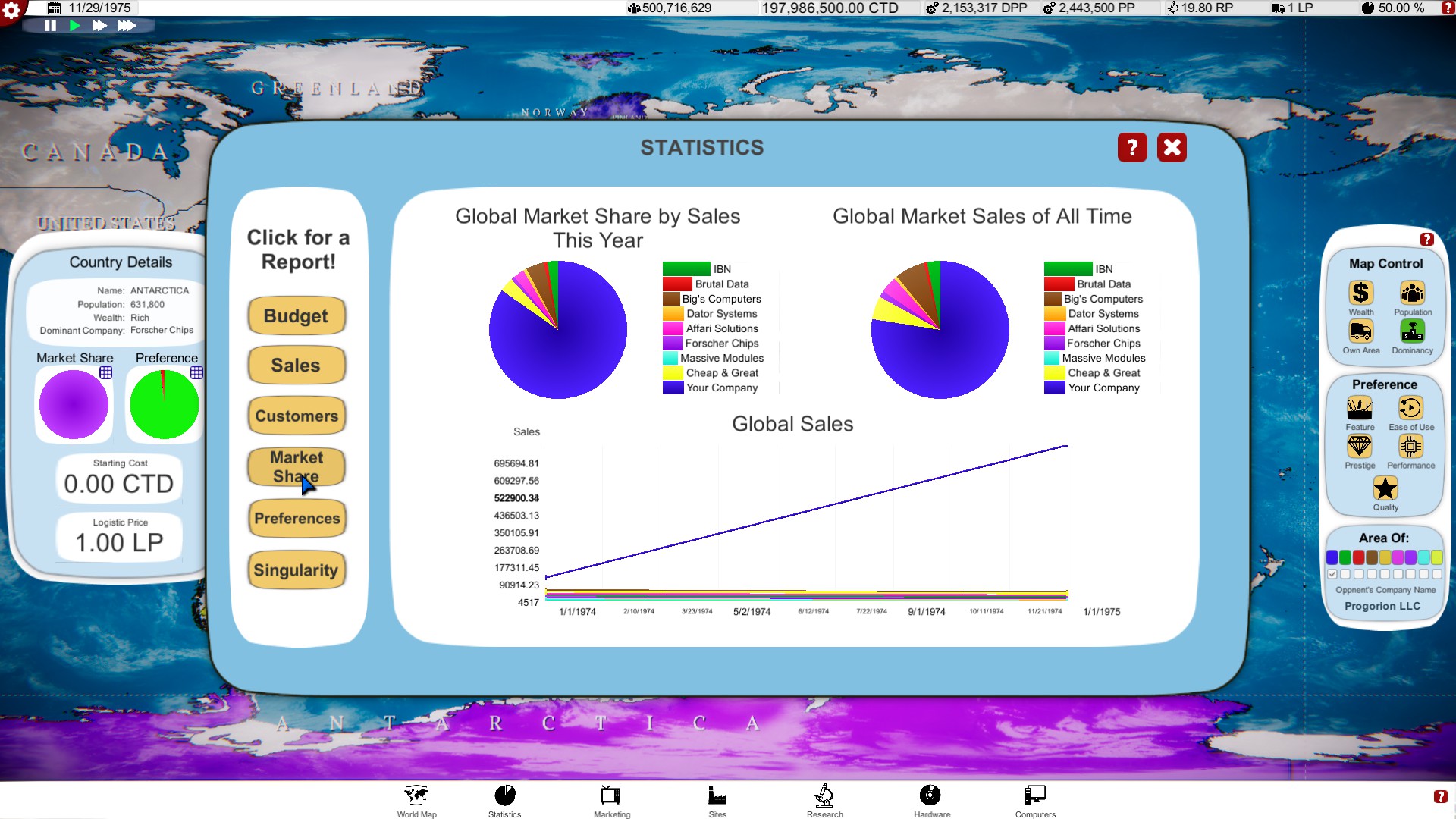 Global domination of all pie charts will be mine. Mwahahaha

OMG! Help me. Please no more. It’s like being stuck in an elevator with 5 minutes of musak on loop.  My ears can not take it any more. Tuneless drivel pumping at me from the built in speaker of my laptop that I was hoping to best in the game. The music audio is not essential for Computer Tycoon, but there are verbal messages about research and building completions amongst other things that are very useful.

Computer Tycoon seems to be developing nicely with updates to the software on a regular (daily) basis. Some big fixes, some improvements. The developer András Illés is clearly listening to his audience and is reacting accordingly. I can’t judge Computer Tycoon too harshly as it is early days and it looks like the foundations are there for an exciting game. I’m sure if there was a larger team working on this game it would be more aesthetically pleasing and tuneful, but on his own András has done a great job so far.

Disclaimer – we received a copy of this game to carry out our review, we then built a better computer within the game to redo the review on.

The Steel Circus alpha test is now open for all you PC gamers to ...

Satisfactory is a game I've been looking forward to trying out since I first ...