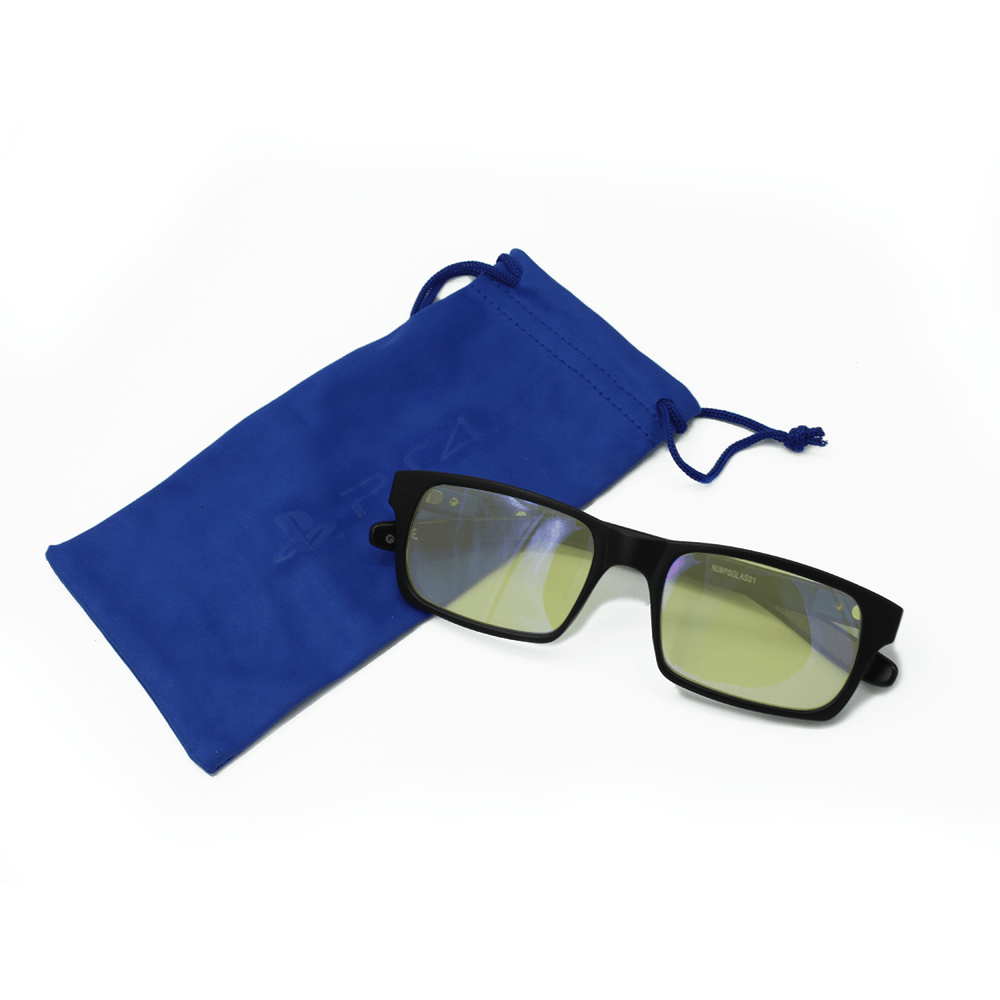 Recently through the post at Thumb Culture we received a pair of the Official Sony PlayStation Gaming Glasses, designed by our good friends over at Numskull and delivered from our pals over at Yellow Bulldog. They looked good and with the promise of reducing eye strain on my gaming marathons, what isn’t to like about these.

On the packaging of the Gaming Glasses we are given an insight into what these revolutionary goggles are designed to do for you. Lot’s of taglines that could all be total horse doo-dee but lets see, Improve Vision, Play Harder, Play Longer. These are a few of the killer lines that get gamers’ excited I guess. But what do they mean!

This is all great on reading, but lets move onto the hands on with the Gaming Glasses.

Getting them out of the box the first thing that you notice is the plastic construction, its not cheap plastic by any means, however they do creak and if you push too hard on the lens I’m sure you could easily pop them out of their housing. The arms of the glasses are emblazoned with the official PlayStation logo as well as the face buttons synonymous with PlayStation controllers. Moving onto the lens, you are greeted with a set of amber lenses designed to reduce glare and blue light, and from my experience with these glasses they do tend to tint your screen slightly. Playing through Call of Duty: World War 2, the Gaming Glasses gave the world a sepia tone, which in all honesty added to the authenticity of the game, giving a more ‘Old Style’ feel to the world. It was only when I took the glasses off that I realised that I preferred the colour palette with them back on.

The Gaming Glasses come with a very nice pouch to store them in, which also doubles as a lens cloth for when you get your grubby digits on the lenses. Embossed on the pouch cloth is the Numskull logo as well as the PlayStation logo. Just in case you forgot what they were. The pouch does a great job of cleaning the lenses, however, don’t push too hard or be too vigorous as I think you might pop the lens out.

So do they work! Well in a word Yes…or at least I think so. I carried out a couple of tests with these glasses, playing for an elongated period without them on, as I have been doing for years. Then on the other side, playing from between 9pm to 2am on the back of a long day at work. Now whilst my eyes felt less strain whilst playing with them on there are a few things that need to be said about the Gaming Glasses as it wasn’t all cupcakes and rainbow.

The glasses due to their nature kept on giving me a reflection from the windows in my front room and any lamps that I put on, so essentially I was forced to play in total darkness (apart from the TV obviously) to prevent these reflections. Yet they still happened. Now not being a glasses wearer in general I wasn’t sure if this was just par for the course and carried on. After a while you zone out to the reflections and you can concentrate on the gameplay.

The second issue and quite possibly the most aggravating one, the glasses are quite tight. Now this could be because I have a big head, my Wife quite often tells me I have a heavy head, there was me thinking it was a term of endearment these northerners used. So when wearing the glasses normally they were comfortable, with the natural arc on the nose pads allowing for comfortable playing. However when putting my Turtle Beach Stealth 520 headset on, the strength of the headset caused the arms of the glasses to pinch into the side of my head. Causing quite a lot of pain after a while. Now this might not be a problem for someone else as they probably don’t have as big a head, or they wear a different headset. But the whole point of these glassed in my eyes was to prevent me getting eye strain. Yes the pinching of my temples wont lead to eye strain, but it would definitely lead to a headache. This isn’t the fault of the designer, just the unfortunate combination of the equipment that I have to work with.

I guess all that is left is to give my thoughts on whether they are worth their £24.99 price tag.

Well, yes I think so. Although there are a tonne of variables when reviewing something like this, the overall feeling was that they did their job. They reduced the eye strain I usually get from elongated periods of gaming. Did they give me a competitive edge over my opponent? I don’t think so. Although I will continue to test the Gaming Glasses in a number of situation to see if they do actually make me a better gamer. Maybe when you are into hour 5 or 6 of a gaming session it might start to show their worth a bit more.

Better put the coffee on.