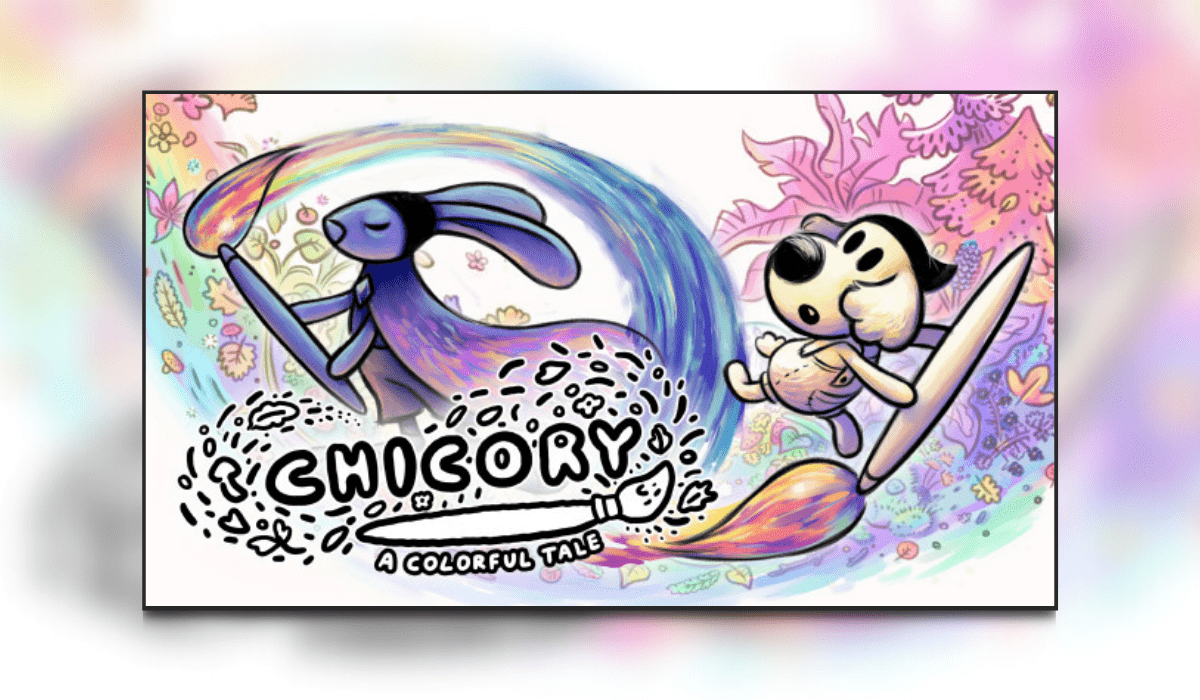 Made by a team of only 5 people, comes a painting game that focuses on adventure and art. Chicory: A Colorful Tale is a 2D puzzle game developed by Greg Lobanov and his team and published by Finji. It was released on June 10th, 2021 on Microsoft Windows, macOS, PlayStation 4, and PlayStation 5.

Chicory – The perfect game for anyone who grew up painting random stuff on Microsoft Paint.

Since joining Thumb Culture, I’ve been playing a lot more games than I ever thought I’d play. Because of that, this is the first time I’ve ever played one of these painting games. I’ve never gotten the opportunity to play something like Mario Paint, but I do love a good puzzle game and a 2D side scroller. I don’t expect anything action packed but I’m looking forward to giving a new type of game I’ve never played before a shot. So here we go.

If you love this game and want to share your thoughts or just like this review, leave a comment. We always love to know what you think.

After writing the name of your favorite food in the menu, which ends up being the name of your character, the story begins. Chicory: A Colorful Tale tells the tale of the new wielder of the magic paintbrush, you. But instead of you being handed the paintbrush by Chicory, you end up stealing it. As soon as you step outside, you notice that the entire landscape is black and white. The townspeople mention how scared they are and it was the work of something evil. After goofing around more and being given Chicory’s blessing to wield the brush, the quest now focuses on you painting the world back to it’s original state and defeating the bad guys.

Chicory: A Colorful Tale takes a unique approach, in having a painting game, but adding a story to it. But, the story could have been better. To me, it feels very rushed and I was never firmly invested in the main character. While I do appreciate the developers making the decision of getting right to the point instead of having long cut scenes, I felt like I was just thrown in without context. But the developers really nailed it with the controls and puzzles.

The controls are incredibly fluent. If you’re playing this on PC, like I am, it feels like a dream. And the puzzles are the perfect difficulty, not too hard but not too easy. There are still many puzzles that are tedious but the pros out way the cons. As the game goes on, your brush starts to improve. You can make better shapes and you even get glow-in-the-dark paint for caves. And oh my god are the boss battles fantastic! They’re just so creative, and I really felt like I was being challenged. Every time I found a new boss, I got excited.

However, finding your way around the world can be a pain. There isn’t really a good map system in place and it has a lot of a game mechanic I really hate, backtracking. It’s the classic scenario of, “Do I go this way or that way. Which way takes me to the goal”. You do get a map system later but it doesn’t really help a lot. The map also doesn’t have something like a giant X where you’re destination is at or any other type of indication. That can get annoying real fast.

The plot does feel very rushed and that really is the biggest problem with the game, but Chicory: A Colorful Tale excels at its look and audio. The entire game is black and white but you can paint it however you want. Every detail and option is well thought out, you can paint the leaves of a tree one color and paint stripes on the trunk. You can paint the grass blue or paint symbols onto the houses. It’s your world and you get to put what you want in it. If you reach an area where a boss battle is at, the landscape turns into something wicked and depressing.

I feel like because of this scenery, the game stands out from all the other games coming out this year. And for a game made by only 5 people, it looks incredible. There wasn’t a single glitch or frame rate issue I found.

Now that we’ve talked about the meat and bones of the game, lets mention the defining aspect of Chicory: A Colorful Tale, the music. I seem to be coming across a lot of games with really fantastic music, even games I think are bad have had some great music. Chicory is one of the best I’ve heard since I started writing game reviews. The score reminds me a lot of Undertale, it has the epic boss battle music but the small jingles used for when you’re wandering the peaceful towns. But for the regular audio, it’s not really anything to laud about. There isn’t any voice acting, except for the occasional grunt and murmur from NPC’s. Even though I feel the plot and characters don’t really mix into the world well, the music and visuals help the world come alive.

Now, this is about a 10 hour game if you play just the story. Quite the surprising length for a game like this, but it’s worth it. I don’t know how they managed to fill in so much stuff from just one simple concept but it’s great. To make it even more interesting, if you do all the side quests, it could take about 40 to 50 hours.

I don’t expect everyone playing to do that, but this is something that’s going to keep you busy for a while if you do.

When I first started playing Chicory: A Colorful Tale, I found myself bored quite easily. I kept wanting to leave the game but something kept bringing me back to it. Maybe it was the colorful art style or the unique puzzles. Whatever it was, I found myself enjoying it a lot the more I played. While I do have a problem with the story, I really enjoyed the creativity. This is a very interesting game and I’m proud for the development team and what they did. If you love games like these, you are going to love Chicory.

With that, I am giving Chicory: A Colorful Tale the Thumb Culture Silver Award.

One thought on “Chicory: A Colorful Tale Review”