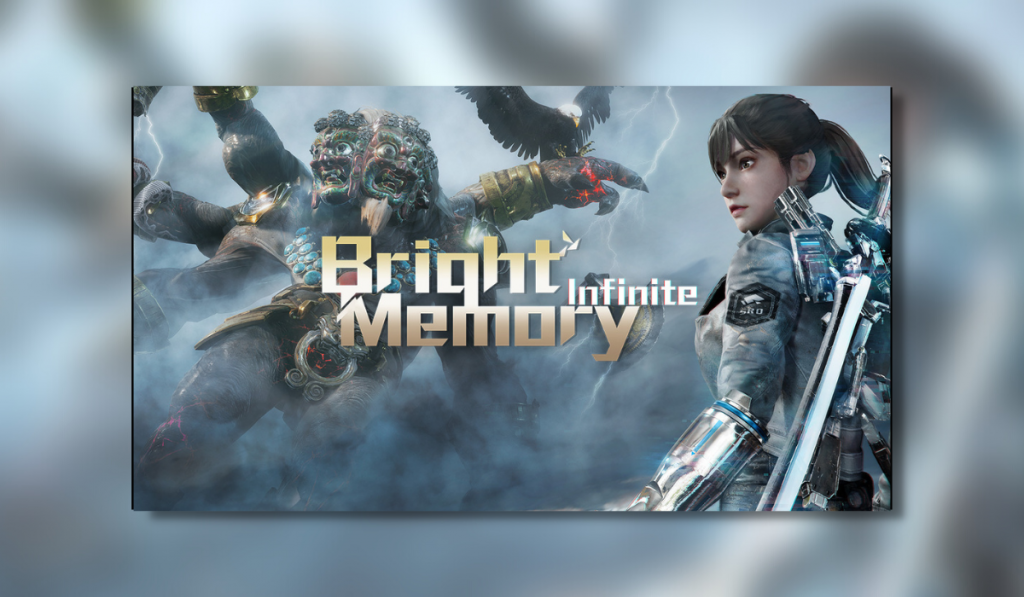 Bright Memory: Infinite is a sci-fi single-player FPS set in 2036 China where you investigate a singularity threatening the world. It was made by indie developer Zeng Xiancheng of FYQD Studio with their first major release and publisher Playism (DEEEER Simulator). Bright Memory was originally released in Steam early access in 2019 as an episodic game. After success on Steam, Xiancheng was inspired to re-release Bright Memory in full rather than in episodes. FYQD Studio has found success, both in Steam early access and being awarded the Unreal Dev Grant from Epic Games.

I played the PS5 version of Bright Memory and it is also available now on Windows PC, Switch and Xbox series S&X. We wrote an article on the GameSpot Play For All 2021 gameplay trailer reveal which you read here.

Shoot and slash through crowds of enemies in Bright Memory: Infinite

I don’t normally go for first-person shooters but Bright Memory: Infinite really caught my eye. I’d love to know what you think of the game in the comments below. Whether you’re as excited as I am or not, we’d love to know your thoughts.

Bright Memory begins with the protagonist Shelia being called in by her boss at the Supernatural Science Research Organisation (SRO). She is sent to look into a strange phenomenon that later turns into a mystery of a black hole and two worlds seemingly overlapping. Getting there in rural China, Shelia has to contend with rival factions, mythological creatures and the black hole itself. Shelia makes her way through areas modelled after real-life locations in China as she seeks to learn more about the singularity and hopefully avoid a global disaster.

Bright Memory lives up to its description as an action FPS with Shelia getting into the thick of it almost immediately. Make your way through the beautifully designed setting already occupied by enemies. Playing on normal difficulty I found the combat intense and engaging with the blend of various weapons and dealing damage. From cutting enemies down with Shelia’s sword, blasting them with fire shotgun rounds to dealing tech damage, the game does well to balance the array of weapons, skills, and abilities. Complemented with various upgrades, Bright Memory provides a solution to suit the current situation and different styles of play.

The variety of enemies gradually introduced will keep players on their toes as combat comes quickly and often. While the enemies can feel repetitive, the available weapons and items mean you probably won’t mind. The volume of the combat felt just the right level of adrenaline-inducing pressure for an action FPS where choosing the best weapon/ammo. Also adapting to new environments, even using them to your advantage felt smooth and satisfying when on foot, in a car to even during a wild shoot-out on the wings of planes!

While the action of Bright Memory gets the adrenaline going, I felt this meant the plot suffered as a result. I was intrigued by the opening scenes introducing the SRO and the mystery of the black hole but little more information was given. As the game goes on we do learn a little more but still felt ambiguous at best.  I felt the game left much of this unexplained and unanswered so I left the game with a lot of loose threads in my mind. My only other issue with the game was I would find a new weapon only to be stuck unable to switch to another. This became a source of frequent frustration with the only solution being to reload the game.

I found Bright Memory to be a visually striking game, especially the environments. While very much on rails, the game did paint a beautiful picture of the areas of rural China it is based. Made for PC and current gen consoles, I feel the most was made of this technology. This includes being able to play in 4K, features like ray tracing, shadow effects and more. I generally found the game ran smoothly, specifically during fast-paced combat. And of course, the game looks great when it comes to combat and the design of enemies, especially the mythical creatures. During third-person cutscenes, Shelia was neutral and expressionless which took me out of the game slightly.

Equally the audio of Bright Memory was very well done and immersive. The voice acting gets the job done however the soundtrack and score work well in setting the scene. Environmental sounds as well as those of combat blend well together even when focused during a high-octane battle. Although I played the game in English there is full language support in numerous languages and full English, Japanese, and Chinese audio. Similarly, I was pleasantly surprised to learn the original soundtrack features music from composers Cody Matthew Johnson (Resident Evil 2 Remake) and Jeff Rona (God of War 3).

Bright Memory is a short but sweet experience with my playthrough taking a little bit over 2 hours. However, the game does come with 4 difficulty levels to sink your teeth into. And of course, the many different achievements/trophies to unlock for the completionists among us. The scene selection option to replay certain battles etc makes also gives quite a bit of replayability. Both at release, there are several cosmetic packs available to unlock and enjoy. At the same time, Bright Memory is also available on PC VR as a solid experience.

I really enjoyed my experience so far with Bright Memory. It’s an exciting and engaging FPS and being made by a studio of one is mind-blowing. The combat does well to gradually ramp up the action from enemies to new set pieces. I felt the plot was lacking and underdeveloped which failed to drive home a strong set-up. The visuals and audio were spot on during combat and the small amount of time between battles. Utilising what PC and current gen consoles offered technology-wise, the campaign may be short and sweet but there is quite a bit to dive into here.

My experience of Bright Memory: Infinite was excellent and I definitely want to experience more. I am also excited to see what FYQD Studio brings us next. I hope you enjoyed my review and if you did you read my thoughts on Barn Finders right here.