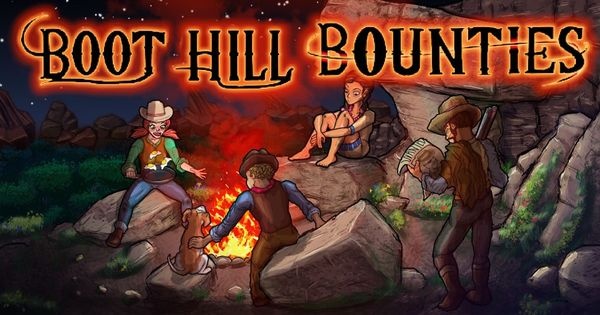 Yeeehaw friends. It’s time to posse up with the JoyCon and ride into the sunset. Gunslinging has hit the Switch. Ok, so it’s not quite the port at the top of everyone’s wish list, but when I tell you Boot Hill Bounties is Red Dead Redemption crossed with Earthbound, you know to expect a hog-killin’ time.

Brought to us by Experimental Gamer Studios, Boot Hill Bounties is available now on Switch and Steam. 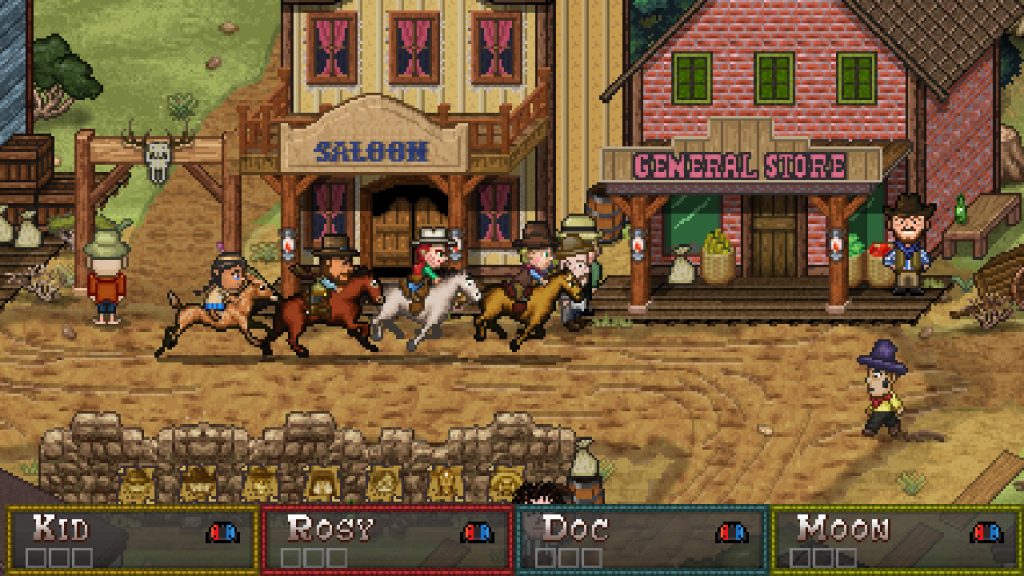 Describing a game as a retro RPG can mean a lot of things and will not paint the same picture for everyone. So, to give you a better idea of what you’ll be playing, let me start by telling you Boot Hill Bounties comes directly from the school of Earthbound.

The game is full of quirky characters, funny dialogue, and fourth wall breaking moments. But, it’s not all Earthbound, Experimental Gamer Studios have taken inspiration from all over the place to bring a modern twist to the proceedings.

This is most notable in Boot Hill Bounties’ combat. It might look traditional however, it’s not the experience you’re expecting. In combat, your power bar constantly builds, and whilst yes you’re selecting an action from a menu, there’s no timer forcing you to wait your turn. If you’ve got enough power to shoot twice, then cowboy, you shoot twice.

It’s a really fun and enjoyable combat system, that offers up plenty of challenges. Not just from particularly challenging bosses, but from managing everything. Playing on your own, you’ll have to control 4 characters in real-time, while multiple enemies are all determined to see you 6ft under.

Although it can get overwhelming, you can pause the combat at any time to give you space to breathe. Or, better yet, get 3 friends round for the ride. The full game is playable with up to 4 players in co-op. Yes, the overworld does drag for players 2-3 (although you can Switch leaders if you want), but it’s a welcome feature and superbly enjoyable way to play. 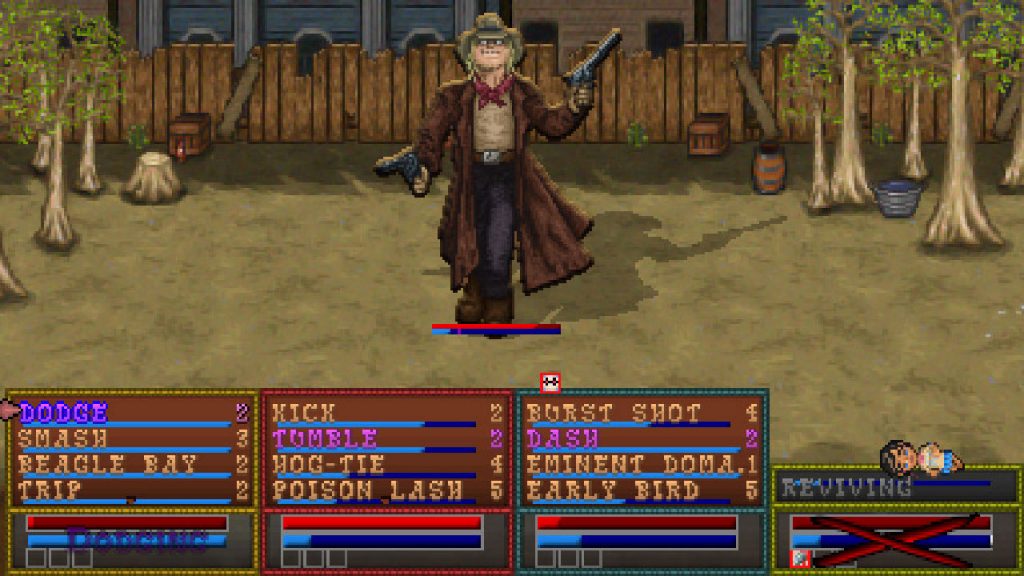 Do you feel lucky punk?

Visually, Boot Hill Bounties wears inspiration on its sleeve. In the overworld, character sprites are large, big-headed, and oozing charm. The world is wonderfully realised, and will take you to all the iconic western locations. You’ll trekking through forts, saloons, forests, riding steam trains, and adventuring across a true wild west.

Earthbound was never visually the most impressive game, and the same can be said for Boot Hill Bounties. For as charming as the world is, some of the sprite work can be hit or miss. You’ll spend most of your time grinning whilst fighting mucky pigs, or laughing at a ridiculous summon of Paul Bunyan, but there’s just the odd sprite that felt like it didn’t get the same level of love.

I also felt overall the UI left a lot to be desired. Menus and fonts are low quality, and whilst it is true to the graphical style, I would’ve preferred to have seen things cleaned up a little. Menus can become cluttered when move explanations are pasted over key information. There are times in the overworld challenge notifications covered what somebody was saying, and for the wide selection of hats, weapons, and temporary stat boosts, even hours into the game I struggled to understand what most of it meant.

Now I might be missing something, but I also couldn’t find anything to track what quests you were on, or what you’ve completed. It left me in an odd position where each time I turned the game back on, I had to rack my brains to figure out what just happened, and where I was going. 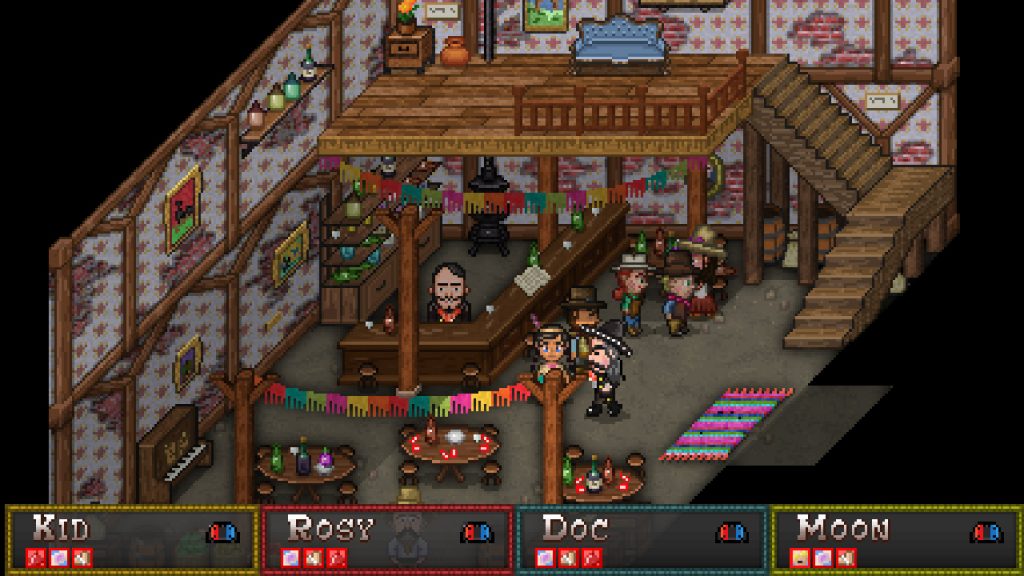 What would a western be without a saloon?

Westerns have a long history of having incredible soundtracks behind them. From the films, we have classics like ‘The Ecstasy of Gold’, and in gaming, Red Dead Redemption 2 brought us one of the most epic soundtracks to date.

Now Boot Hill Bounties hasn’t tried to match those with some incredible orchestration, but what it does is continue with the retro theming, creating a soundtrack that feels like it’s coming right from a SNES cart. The tunes might not stick in your head for hours, but they suit the game and accompany the story perfectly.

In battle, whips cracks, guns blast, and gophers squeak as expected. It’s not the most dazzling audio experience, and whilst you might not need to hear this through your best cans, you certainly don’t need to put anything else on instead. 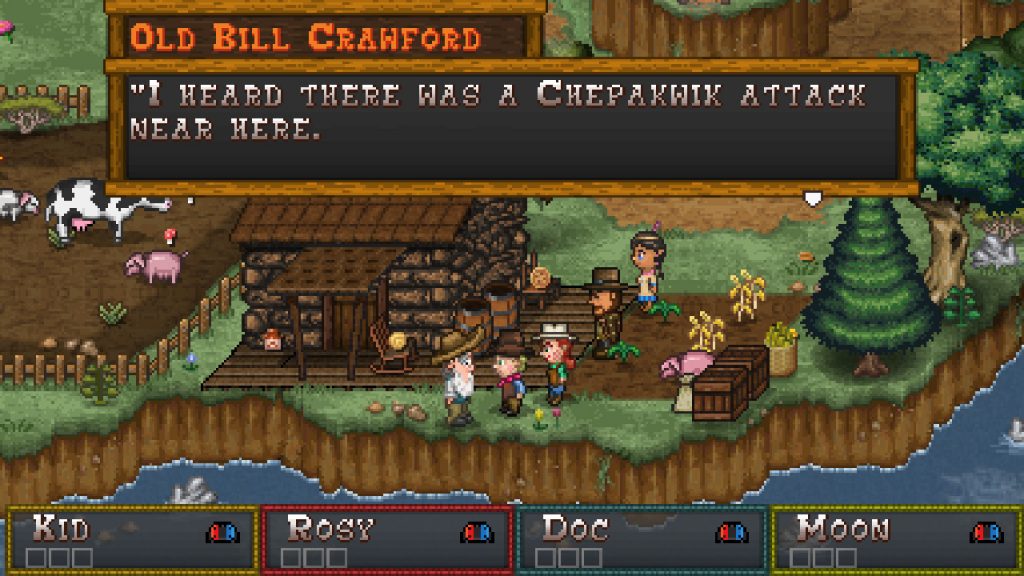 Everything you want from a Western is here.

For a game that costs £12.19, Boot Hill Bounties offers a lot of content. The main story will take you over 20 hours to complete. But there’s plenty of side quests, and collectables to boot. Whilst I haven’t gone for a 100% run, should you want to, you can expect to sink plenty more hours in.

Co-op also adds to the experience, and it’s something you’ll want to try with a few friends more than once. Plus, thanks to the open-ended mission structure, you can tackle bounties in any order you choose. 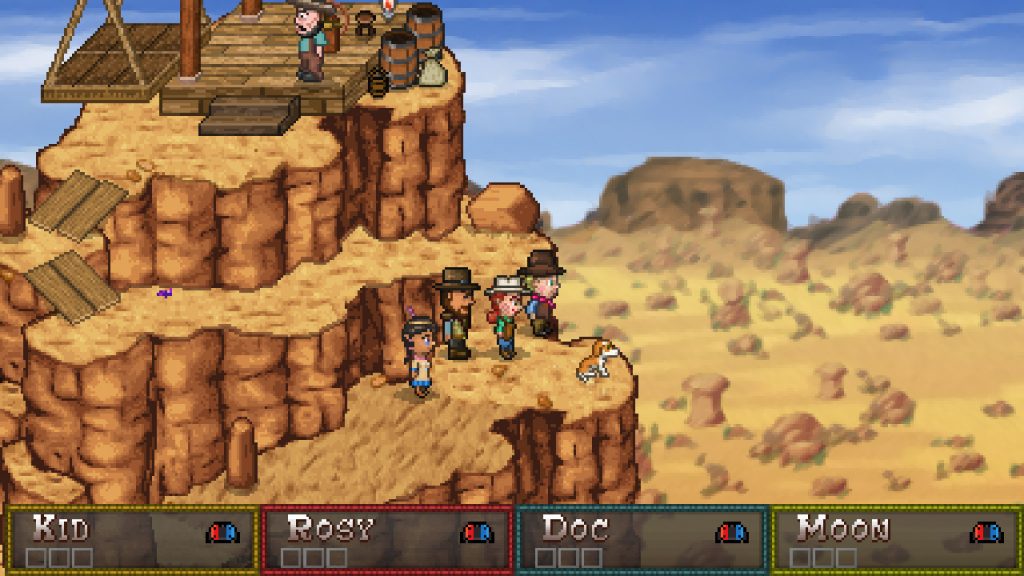 Boot Hill Bounties could be a great game, it’s just unfortunately held back by some rough edges. The cluttered UI hampered my enjoyment at times, and often I found myself unclear on where I was going. However, the enjoyable combat and undeniable charm of Boot Hill Bounties is a pleasure to experience. It sure means there’s gold in them hills.