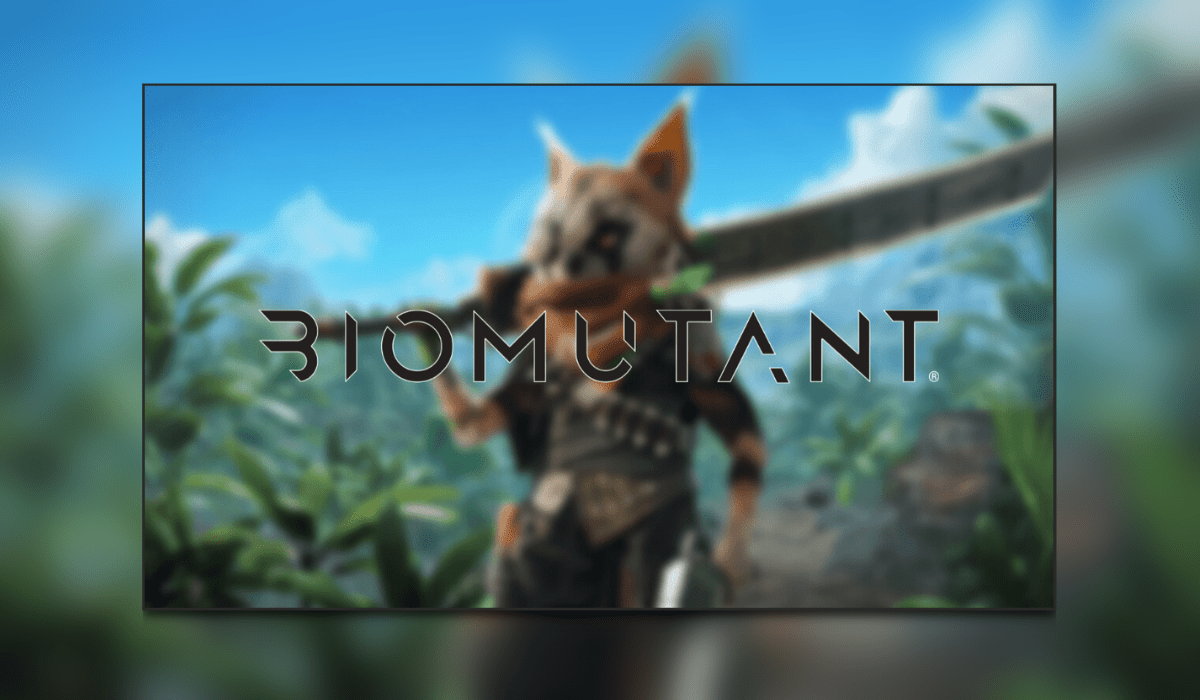 Biomutant from new development studio Experiment 101 (ex Just Cause developers) and publishers THQ Nordic has recently released. It’s worth noting the Experemont 101 is a team of only 20 people. We’ve played it and we have some thoughts to share with you. Available now on PC (Steam), Xbox One, Xbox series X|S, PS4, and PS5. Biomutant is an open-world RPG game, filled with missions, side quests, and collectibles to keep you busy for hours!

Ever since the reveal trailer in 2017, I have been very excited to play Biomutant. It struck me as a zany, over-the-top, open-world adventure game, and I instantly fell in love with the art style and the gameplay I saw. I couldn’t wait to play it! Do I still feel the same excitement now I have gotten my hands on it? You’ll have to read on to find out. Be sure to let us know what you think in the comments. If you fancy, pop over to our Twitter to be kept up to date with any new reviews we post. Be sure to check out our other PlayStation reviews here.

There will be no plot point spoilers in this review, so read on in confidence.

Biomutant starts off with a good old character creation screen. There are so many options to choose from here such as appearance, body type, skin, attributes, class. It’s honestly packed with creativity, so you won’t create the same character twice!

After you have created your character, Biomutant starts out as a linear game for about the first 20-30 minutes of gameplay. During this time the game shows you the controls through various little encounters and slowly introduces you to the mechanics of the game, which are quite vast. I found myself a little overwhelmed while being shown a new mechanic or feature every 5 minutes. But it all makes sense once you have a little poke around the menus and familiarise yourself with the controls.

The bread and butter of  Biomutant is the melee combat. And it doesn’t disappoint, there are quite a number of melee weapons you can collect through your adventure, and they’re very varied in both what they can do, and how they’re used. The melee combat is quite similar to Devil May Cry In my opinion. You have swift, precise sword attacks, and can even launch your enemies into the air and juggle them, much like Devil May Cry.

You also have guns…lots of guns, all at your disposal, you just have to find them first. They range from rifles (automatic and single shot) to pistols, to shotguns. You’re covered, no matter how you want to play. The gunplay is very similar to Ratchet and Clank in terms of how it feels, hence the comparison in the title. Upgrades are also found in the game world to enhance your weapons further and upgrade their attributes.

Biomutant feels very nice to play, the controls are fluid and responsive. The mechanics work well, be it melee attacks, or gunplay. It all feels really solid. I particularly like the words that pop up, displaying the name of your attack when you unleash a combo on your foes or run out of ammo. They remind me a lot of the old 1960’s Batman cartoon.

There are also various abilities and attack combos for you to unlock via experience and progression. These are split into 3 categories. “Biogenetics, PSI-Powers and Wung-Fu”. “PSI-Powers” are your elemental powers, and there’s a fair few different elements to choose from. Whereas “Biogenetics” are more your poison, status kind of abilities. Wung-Fu is where you will acquire new special attacks. You can unlock these in whichever order you would like. The “Biogenetics” and “PSI-Powers” can be assigned to a hot wheel for you to use in-game, during a combo, or just to get the edge on your enemies. While the “Wung-Fu” combos are always active, and just require the correct button inputs.

In true raccoon form, it’s always good to whip out the trouser snake and daddy bags to mark your territory and claim it as a checkpoint. Yes, that is actually how the checkpoint system works!

There’s also a crafting function that allows you to create powerful weapons and armour from parts you may find out in the world through scavenging. These vary in rarity, so some may be more powerful than others. I feel with this rarity system there’s a lot of replayability to be had just trying to find the perfect upgrade for that one weapon, or piece of armour you’re using.

The overall look of the game is really nice. Granted I only played it on a base model PS4 as that’s what I had to hand at the time. It still looked nice, given the age of the hardware. The images here are from in-game screenshots I was able to take.

The audio in the game is also very good. The music playing as you wander around the map gives you a real sense of adventure, while also becoming ominous and a little dark as you near dangerous areas, or enter combat. Biomutant also features a narrator, who comments on things you’re doing and things you come across. Which adds a nice touch to the audio, rather than just having music and sound effects.

The special effects of the game shine through. The elemental effects look gorgeous and really give you a feel of the type of damage you’re inflicting on your enemies. They also all have unique sounds, which fits very well with the elemental attack type being used. The effects of the guns are very well done too. The muzzle flash and quirky sounds the guns make, really add to the charm of Biomutant.

The main story length is around 10-11 hours, which is as expected for games these days. But the open-world portion of the game could see you investing many more hours in! There’s so much to collect, and many side quests, that will leave you feeling satisfied in spending your money on it. If you’re the type to farm that perfect bit of loot, you will be happy here, that’s all I’m saying on that matter.

Biomutant was a little different than I first thought. I was expecting more of an arcade-style of game. The RPG elements were a nice surprise though and kept me interested through upgrading my character and trying out new things. The upgrade system, as mentioned, was vast, with a lot of choices to make to ensure your character is unique to you and the style of play you want to achieve.

Being an open-world game, the map was also sizeable, with many places and landmarks to find and visit at your own leisure. There were a couple of things I didn’t find intuitive, such as the guns and melee combat having no lock-on feature, but this is just me being pedantic.

Considering the development team consists of only 20 people, they have done a fantastic job. Overall I really enjoyed my time with Biomutant and would encourage anyone interested in zany, open-world RPG games to give this one a try! Biomutant has earned a Thumb Culture Gold Reward. 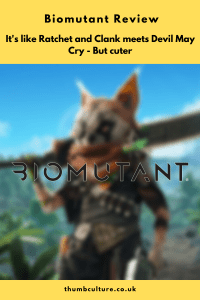