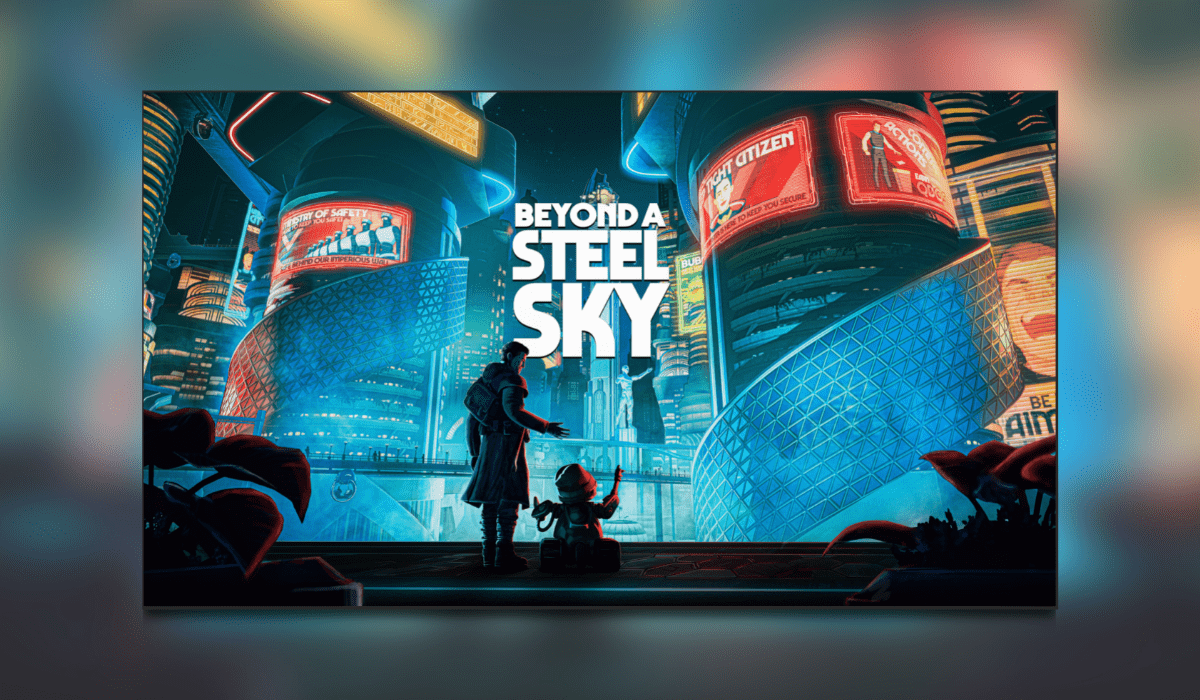 The 1990s were awash with point-and-click adventure games, they felt like a virtual choose-your-own-adventure giving you boundless freedom away from the onslaught of platformers and fighting games. At the summit of this mountainous genre were games like The Secret of Monkey Island, Indiana Jones and the Fate of Atlantis, Lure of the Temptress, and Broken Sword: The Shadow of the Templars. But somewhere lurking in the back was the lesser know but equally brilliant Beneath a Steel Sky. So here we are, 27 years later with the much-belated, long-awaited, and highly-anticipated Beyond a Steel Sky.

What Secrets Lie Beyond A Steel Sky?

Initially, Beyond a Steel Sky was released on to Apple products in June 2020 via the Apple Arcade subscription service. This was proceeded by a PC release the following month. Fast forward to November 30th, 2021, and the game developed by Beneath a Steel Sky developers Revolution Software was published by Microids, who themselves are no stranger to the point-and-click adventure having published the Syberia series. It has now been released on PlayStation 4/5, Xbox One, Series S/X, and Nintendo Switch. For the review, I played on the PlayStation 5. Currently the game is only available digitally, with a physical retail release due on December 21st, 2021.

So the burning question is, in an age where the FPS is king and multiplayer games are growing in popularity, can the single-player point-and-click adventure game stand on its own two feet and recapture the magic and humour of the 1990s, or is it better to burn out than to fade away? Read on to find out.

If you enjoyed this review, please check out my previous one which just so happens to be a little old multiplayer FPS called Call of Duty: Vanguard here.

Welcome to Union City, where your life is governed by that of an AI and your social standing is everything. Citizens are assigned Qdos points for being a conformist, I mean, being a good egg, and the more social points a citizen has means the higher their class. None of this applies to our protagonist, because although he is a good egg, he isn’t big on conformity and lives in the wasteland. But I digress, lets go back to the start of the game.

Beyond a Steel Sky picks 10 years after the original game and is set in a cyberpunk-esque future. It’s not quite cyberpunk, it’s not quite dystopian, it’s a mixture of the two. We are once again placed in the shoes of Robert Foster who is on the hunt for a kidnapped child. A four-legged machine rose up from the ocean, scooped him up, and carried him off into the desert. When Foster woke up, he followed the tracks to Union City, and then, the point-and-clickery begins.

If you know this genre of game, then you know what’s coming. You are essentially an actor in a scene, and you have to talk to everyone, pick up everything, and piece it all together before you can move on to the next. This style of gameplay is perfectly suited to the 2D style. But, Beyond a Steel Sky is a 3D affair. Now it isn’t the first time this type of game has been made for the current generation, but this game just does it so well. The pacing is really good too, you aren’t in any one area for too long and there is plenty of humorous dialogue to keep you entertained.

There is a rather generous hint system that is timed. So if you do get stuck, you are never too far away from the solution. I wish this was prevalent during the 90s. I wouldn’t have had such a scruffy copy of ST Format which contained a guide for The Secret of Monkey Island. However, thanks to that game and guide, it really got me invested in this genre.

A nice added puzzle element and overall useful item is the hacking tool. You will use this to open up areas and manipulate electronics in the environment. You get this early on and you can’t play without it. Using this you will be moving digital blocks around to make machinery do different things. I guess you could call it wireless rewiring. Need to see something on a screen but the screen is broken? Just rewire for it to show on the holographic photo projector instead, as long as both are in range. Play around with it, some combinations can lead to some interesting consequences.

For a story essentially about child abduction, it is quite funny in places albeit being a little tongue-in-cheek. The narrative, though compelling can feel a bit of a drag sometimes. The simplistic controls translate well onto a controller as you would expect. I do feel some of the societal themes could have been explored a bit more. There are references to the original game, but not really enough to make you think it is a sequel. Saying that, it does well enough to stand on its own, without having played its predecessor first.

The art style is a particular highlight as Dave Gibbons reprises his role as the artist. If you recognise that name, it’s probably because you read the Watchmen comics in the 80s. Which in turn means you almost probably played the first game if you are a fan of his work.

A delightful world has been created in a cel-shaded design which is very 1990s. The world is quite inviting and I really wish I got to see more of it. This comic-style animation works very well though and suits the type of game that it is.

The dialogue is well written and really quite funny in places as I have already mentioned. Eric Meyers (John Connor – Terminator: Resistance) plays the part of Robert Foster well, delivering snappy lines that will either make you snigger or gently facepalm.

Two evenings and you have seen all the game has to offer. The game is about 10 hours long from start to finish. Once it is done, there isn’t really any real reason to go back to unless you are the kind to mop up trophies. For the type of game that it is, I think 10 hours is a reasonable length. If it were to be any longer, then it would have to be justified meaningful lore and additional story plot points rather than filling it with hot air.

In short, Beyond a Steel Sky is a fun little romp and it was fun to play a game in a genre that I was so fond of 30 years ago. It’s an engaging story that includes a few tie-ins to the original game. I would happily recommend this to anyone who enjoyed point-and-click adventures who are starting to go a little grey now. The way it works will be instantly recognisable to them, but also different being in a 3D environment.

Because this made me want to fire up my trusty old Atari ST again, I award Beyond a Steel Sky the Thumb Culture Gold Award.