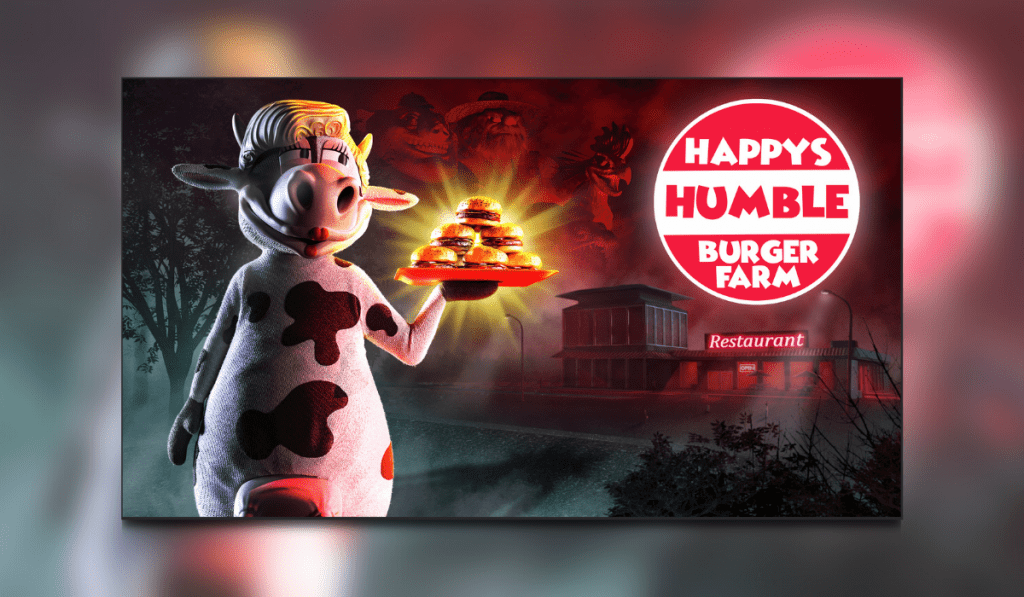 Happy’s Humble Burger Farm, you would be forgiven just going by the title that this was a game similar to Team 17’s smash title Overcooked.

Do You Want Fries With That?

However other than the cooking, it is where the similarities end. A stressful horror game that places you in the world of a quick time service restaurant. Scythe Dev Team has taken all the horror that only those who have worked in that industry will truly appreciate and dialled it up to 11.

Released December 3rd for Playstation and Xbox consoles alongside a PC release. Happy’s Humble Burger Farm was on my list of games to play as it kind of reminded me of Five Nights at Freddys.

Congratulations you’ve been hired to run the night shift of your local Happy’s Humble Burger Farm restaurant. This first-person view will see you serving customers by frying up fries and building burgers. Time is not on your side as customers expect their orders to be correct and quick.

Should you make a mistake on an order or fail to serve a customer on time and you will receive an infraction. Receiving three of these infractions will cause the appearance of Evil Happy. You do have a small chance of redemption if you can make Evil Happy’s special burger without taking your eye off of her. Fail to do this and Happy will get you!!

There are a few issues within the game, I found the lack of direction challenging. Having to find all the new items with no heads-up display caused frustration. This is where a tutorial or better explanation could come in. It wouldn’t have taken much of a leap as it shows what is in the burger but not where the items are found. Then there is the creepy guy who stands in front of the grill. I can’t see the point in him being there as he doesn’t interact with the food at all.

It really only takes 2 words to sum up the city, Dark and Dank. The fact that you work the night shift does nothing for the ambiance.  There are secrets to be found within the city and also decor to buy for your apartment. Taking a walk through the foggy streets can give you more information about the story.

My biggest complaint about the game is that it was advertised as being PS5 and PS4, however, what they neglected to say was that it was only playable on the PS5 via backward compatibility.  There is no PS5 version, which considering the advertising left a bad taste in my mouth…and it wasn’t one of the burgers.

The dated appearance makes you question what console you are actually playing on. The early Playstation 2 graphics made an already frustrating title that little more jarring. Having the game only playable during the night or early hours after finishing your shift gave Scythe Dev Team the opportunity to add more to the graphics however they instead took the quick route.

I don’t know how much of this was due to the Covid pandemic and not being able to focus on development in the way they would have wanted. It is purely speculation and certainly, neither Scythe Dev Team nor TinyBuild has indicated as such.

The audio adds to the tension within the game with creeks and scuttering from the ghosts and Evil Happy certainly makes her presence known. I would have liked some interaction with the characters as opposed to grunts and mumbles. There is your boss who talks to you via the headset as your only other communication. Orders from customers appear on the terminal which tells you everything they would like.

Whilst the main story is around 2.5 hours long, full completion will set you at 4hrs. There is an option of an Endless mode, where customers just keep coming. It simply doesn’t appeal to me, I worked in retail and that fills me with dread.

Timewise to finish the main story is about right and to its credit, it doesn’t drag out the story. I mentioned earlier there are items that you can find and decorations that you can purchase but it is more a filler.

Happy’s Humble Burger Farm, unfortunately, had to go up against the release of Five Nights at Freddy’s Security Breach that offers a far more polished title available on both Playstation and Xbox consoles including next-gen (Playstation 5, Xbox Series S/X).
I really wanted to enjoy my time with Happy however it left me feeling both disappointed and frustrated.