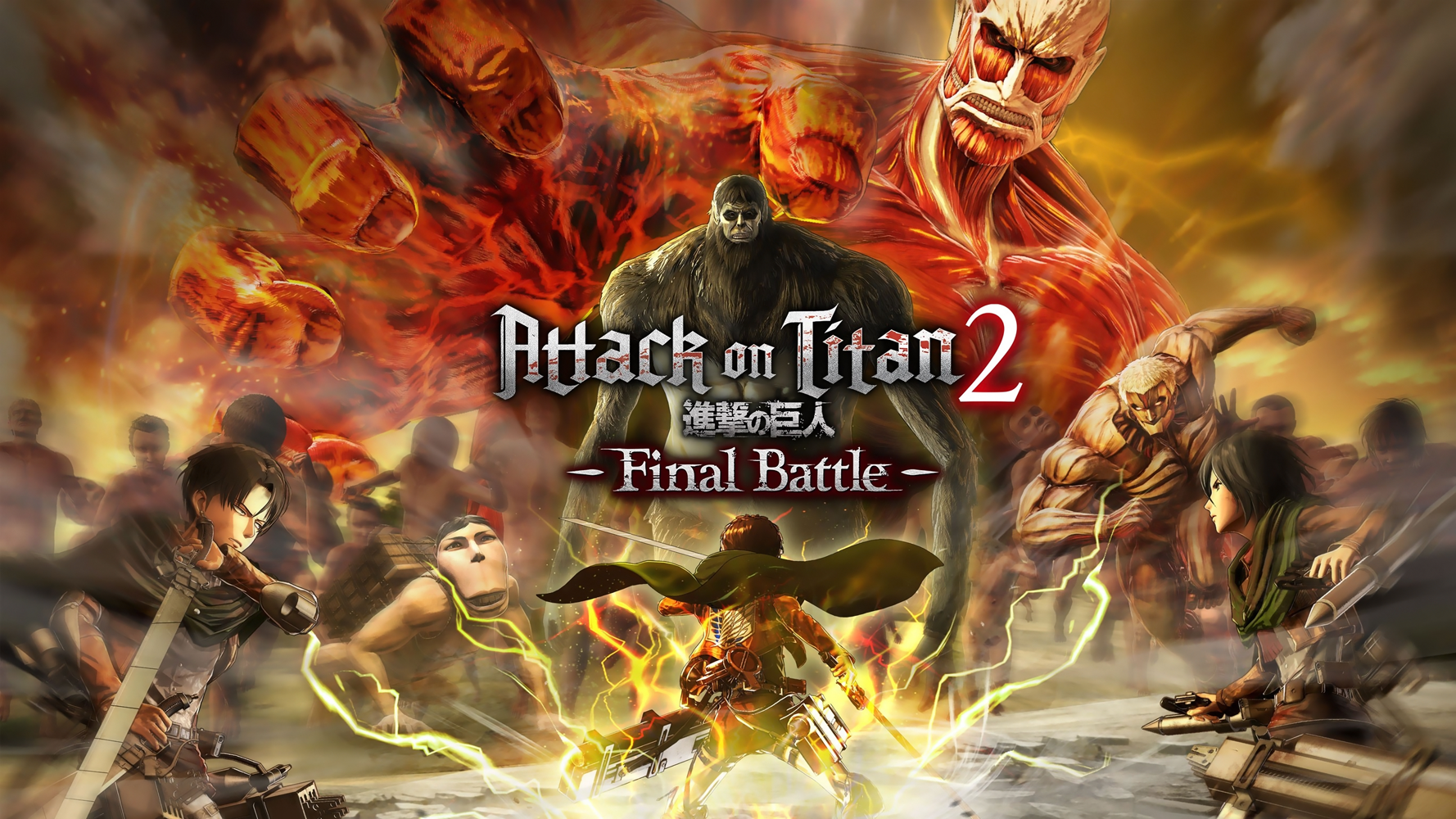 Over a year ago, Omega Force developed and released Attack On Titan 2 which swiftly became one of my favourite games of that year. Now, over a year later, the development team have been hard at work creating Attack On Titan 2: Final Battle which isn’t just a small DLC package, but an upgrade to an already brilliant game. The changes are huge and the changes are plenty. Omega Force hasn’t just created some more story content, but completely refined and repackaged the original title as well. Strap yourselves in because I am now going to try and convince you why you should absolutely play this game.

For anyone who hasn’t played any Attack on Titan games before, I’ll explain briefly. In the base game, you play as your own created character and interact with characters from the anime and fight alongside them to try and eliminate the Titan threat. Titans are giant, humanoid monstrosities whose only purpose is to wipe out humanity. Alongside Eren Yaeger and company, you’ll fight and slice your way through thousands of Titans in order to save your city and save humanity from extinction.

However, the Final Battle Upgrade pack has you play as characters from the anime. In an additional mode known as Character Episodes, you’ll take on the role of a number of characters from the anime, experiencing the fight from their point of view. For the purposes of this review, this is the mode I’ll be focusing on as the bulk of your content when purchasing Final Battle is on this mode. If you’re new to Attack on Titan, I would highly suggest playing through the regular story mode first before you dive into Final Battle, as there are heavy spoilers for the base game if you read any further.

The Character Episodes start off where the base game ends. Both Reiner and Bertholdt have been defeated and humanity is safe again for a little while. The events of Final Battle have you playing through Season 3 of the anime, all the way up to where the show is currently at now. Political discourse and military corruption is rife and the Titan threat is larger than ever. Fans of the base game and previous games will feel right at home here, with just as many shocks and epic set pieces to take part in. 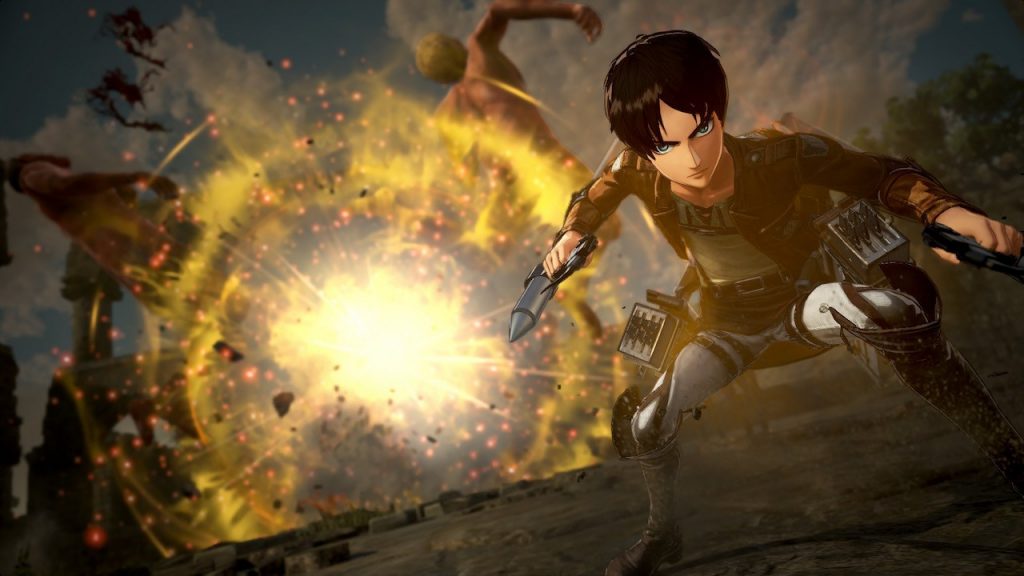 Combat is still basically the same with a few tweaks and changes here and there to accompany new enemy types. You need to fly around each Titan and slash their napes to kill them off with the option to cut off some of their limbs to slow them down or remove their method of defence. Final Battle adds some new weapons which drastically shakes up the combat if you so choose. The addition of guns gives players a choice to fight at a distance and whilst they can be a little tricky to use, they pack a punch and mastering them can be very beneficial.

Alongside your new weaponry is also a handy charged attack. Whilst you fight and complete side missions, you’ll obtain a new attack which results in devastating results. Armed with either Thunder Spears if you’re using your blades, or a pair of giant miniguns if you’re using your new firearms, you’ll be able to mow down legions of Titans in just a few seconds. It’s not the biggest addition, but it adds a level of depth and interest to an already brilliant combat system.

Attack on Titan 2: Final Battle is a flawless game mechanically, and this new expansion definitely drives home that point, but the majority of my issues with this franchise is that the developers don’t really seem to understand what to do with the narrative, something which I’m sure is quite important to a lot of A.O.T fans. The first game had you reliving the events of the first season of the anime but for some reason, the sequel ended up retreading that same ground with a character the player created and then had you play out the events of both the first and second seasons.

If that wasn’t confusing enough, Final Battle then drops your playable character and goes back to having you play already existing characters. Not only that, it also blasts through the plot of season 3 of the anime at rapid-fire pace, making all of the twists and turns in that season lose all of their impact. Characters die and battles are won in still images and the lack of time taken when going through the plot of the third season makes the game’s plot seem like complete gibberish to newcomers of the franchise. 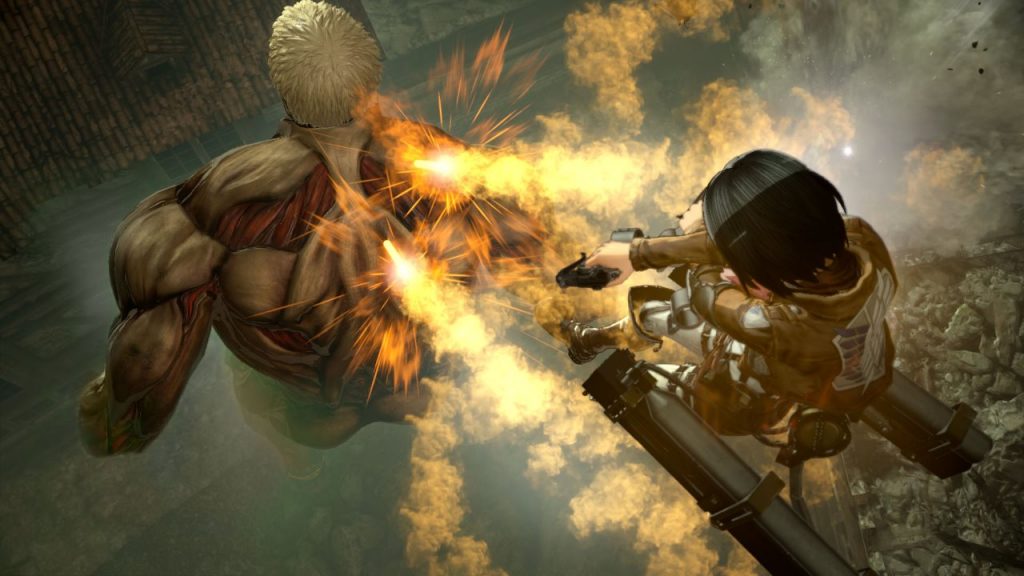 Visually the game is incredible, which should be no surprise to fans of the base game. The amount of Titans on the screen at once is amazing and the variety in their designs is something that has always impressed me throughout the franchise. Final Battle goes one step further however, by showing off the game’s graphical prowess. Before the aforementioned charged attacks are executed, you’ll be treated to a little, three second animation that is incredibly colourful and vibrant.

It almost looks like the developers are showing off.

This is also evident in some of the new environments added to the game. A fair way into the game you’ll be treated to an amazing spectacle. You’ll be flying and fighting your way through a magnificent cavern that is almost radiant. The blue of the walls clashes with everything else making it such a sight to behold. The game can dip in frames when you’re in a particularly detailed or large area, but other than that, Final Battle is a gorgeous addition to a gorgeous game.

Attack on Titan 2 has one of the best gaming soundtracks I’ve heard in quite a while. The fast-paced music in the background almost always accompanies the gameplay perfectly making each level you play feel much more frantic and chaotic. My only complaint would be that a lot of the music within the new expansion is also in the base game. It would have been nice to get a couple of new tracks to listen to.

When it comes to bang for your buck, you won’t get many better games than Attack on Titan 2 and Final Battle only makes the game better in terms of value for money. Not only does the expansion add another bunch of story-related missions that can be replayed to get an improved score, it also has another base building mode that has you constantly fighting Titans in different locations to add members to your roster and build new buildings in your base. Personally, I’m currently sat at an embarrassing 140+ hours put into Attack on Titan 2 and another 15+ with the Final Battle expansion.

If you’ve made it this far, you can probably tell that I absolutely love Attack on Titan 2: Final Battle and I think that developers Omega Force have outdone themselves yet again with this expansion. It’s difficult to create a fantastic game and even more difficult to drastically improve upon said game months later, but these developers have managed it. If the game had gone into a little more depth with the story then it would be a perfect game for me, so for that reason I’m giving this a Thumb Culture Gold Award.