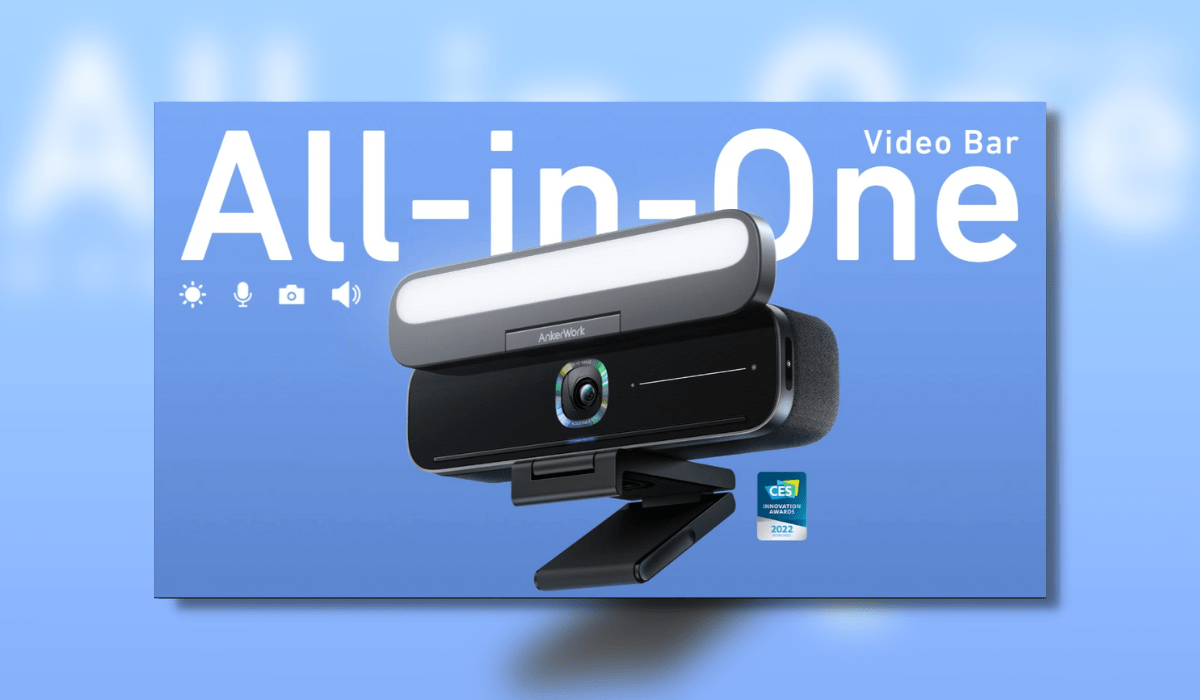 AnkerWork has been at it again. Their R&D department just seems to carry on endlessly seeing how far they can push their tech. Having reviewed the PowerConf C300 in the past, the B600 Video Bar is certainly the beefed-up bigger brother!

Touted as an “all in one” package, can this fulfill all your webcam and conferencing needs?

The concept of the B600 is to have a peripheral that has everything you could ever want in a webcam. Rather than just a camera, maybe a mic, this unit comes in as a full-blown package, capable of being extremely versatile.

Weighing in at a whopping 465g when compared to the C300’s 130g, I was a little apprehensive at first due to my monitor bracket being wall mounted on drywall. Ok, the drywall is a couple of inches thick but my monitor already weighs 8kg!

You have a 2K resolution on the camera at a fixed 30FPS with a field of view of up to 95 degrees. This is an upgrade to the C300 that sports a 1080p resolution however the C300 did have 60FPS. The frame function and autofocus remain as before however the microphone now has a 4 mic array rather than dual mics.

The mic array makes the quality of the sound a lot clearer however it is also used for AnkerWork’s latest feature, VoiceRadar. the idea is that it can identify the background noises and eliminate them from the call.

The weight of the B600 certainly isn’t a result of a better camera and microphones, oh no, there is more to this than meets the eye! Inside this Video Bar are two 2W speakers that with the auto echo cancellation technology should prevent any feedback from the mics.

So, we have a camera, mics, speakers, what else could you wish for? Oh yes, lighting!

A very nifty-looking light bar is revealed when the hinged cover of the B600 is raised into the air. Controlled by a touch slider to the right of the camera you can alter the brightness. Fed up with looking washed out? The lighting temperature can be adjusted using the AnkerWorks app from cool white to warm white manually as well as controlled automatically depending on the lighting that is already in your room. Pretty cool!

The B600 comes with a USB-C for data and a secondary USB-C wall plug for power.

The Ankerwork B600 Video Bar has been an interesting and very easy device to operate. With simple touch buttons on either side of the bar to turn on and off the light as well as to mute the mic there really isn’t too much button pressing to make this a complicated device.

Simply plug it in and run the AnkerWork software to ensure you have the latest firmware and off you go. Windows automatically detects the B600 and also changes the sound output to the video bar’s speakers.

The B600 sits firmly on top of the monitor screen using a hinged bracket to stabilise it. You do not want this to disappear off the back of your screen!

I tested the B600 both on Teams (as many of us now use on a daily occurrence) as well as Discord. Flipping the hinged door to the B600 activates the camera however you can use it with the door down to just utilise the mic and speakers if you so wish.

The video quality was noticeably a lot better on the calls. How many laptops and monitor screens do you know with a 2K webcam built in? The solo-frame option allowed the camera to track me if I began to move around, its a little gimmicky as you are usually pretty static when sitting at a desk however it did add a bit of a dynamic feeling to it.

When the built-in light is switched on, the B600 judges how bright the light needs to be and even if it is required. You have the ability to override the brightness and colour temperature which really helps at times if you look a little washed out by the monitor screen. The light has an opal diffuser that stops it from producing too much glare in your eyes.

While the 4 mic array enhanced the clarity of what was heard I would say that I was a little disappointed with the noise cancellation. The VoiceRadar technology didn’t seem to do a lot to quieten the background sounds with distractions such as the TV playing and the dog barking seemingly being as loud as you would normally expect. I am unsure how sustained the unwanted sounds need to be for the technology to properly kick in. There are no options to adjust when it comes to mics or speakers in the AnkerWork software.

The speakers sounded good for twin 2W, nothing bassy, however they were certainly loud enough for the calls. The anti-echo facility prevented the mics from feeding back, something I was a little skeptical about due to their close proximity. I did find that if you had chosen the sound to output onto your existing PC speakers and not the B600, then there were complaints of sound echo from it.

For me, the pros are a more defined picture thanks to the 2K camera and the sound works well when the mics and speakers are used together. The AnkerWork software, like the B600 Video Bar, is simple to use and not complicated at all therefore it can appeal to everyone, not just tech-heads.

I do have a few negatives. The USB-C data cable is not long enough if you have your PC below your desk and the camera on top of your monitor, this can be overcome by purchasing a longer USB-C cable or having a USB hub on your desk. The noise cancellation didn’t seem to do very much to quieten my background sound. The price is also in the premium range at £219.99.

Overall the AnkerWork B600 Video Bar is a clever piece of tech if you are after a combined solution for chatting and conferencing. You can effectively declutter your desk of redundant speakers and lamps and use what is built into the B600.

With the way that working has changed, many people will find themselves at home, and if like me, using their gaming rigs during the day for their jobs. The B600 certainly brings professionalism to hybrid working and the camera is great when streaming gaming sessions too, just don’t tell your boss that bit!