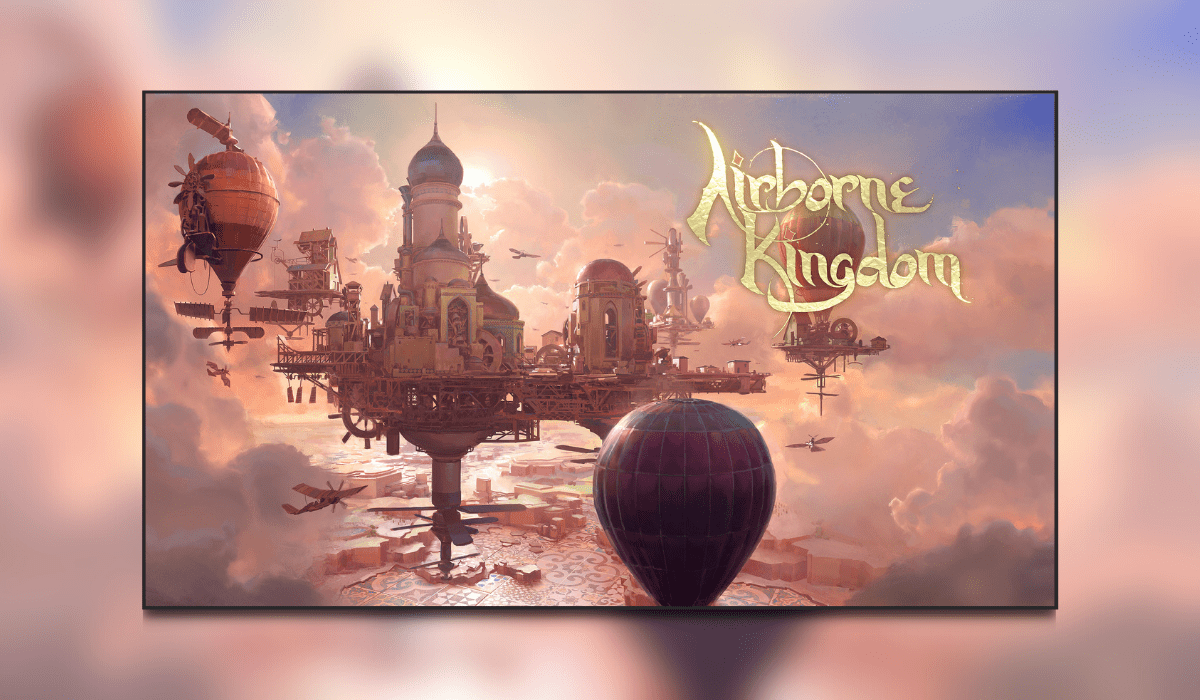 Welcome to my review of Airborne Kingdom. It is developed by The Wandering Band and published by Freedom! Games (To The Rescue!, Cat Cafe Manager). I am playing the PlayStation 4 version on the PS5, the game is also available on PC via the Epic Games Store, Xbox One & Series families, and the Nintendo Switch.

Join The Mile High Club In An Airborne Kingdom

Can Airborne Kingdom keep me floating or will I fall flat on my face? Keep reading to find out. Check out my previous game review here where I reviewed Let’s Build A Zoo.

We start off Airborne Kingdom with our first building, which is the center of your kingdom aptly named the Town Center, this helps keep your kingdom afloat and moving around so you can gain more resources from afar. Trust me when I say resources are of the utmost importance in this game.

Without basic resources such as food, water, and coal, you will fail fast. Gaining resources is actioned in quite a unique way in Airborne Kingdom. We must fly our entire town to be within a radius of the resources, unlike other city builders where we must move our peons, peasants, workers, etc to the resources. We then have to farm the resources by sending planes with inhabitants down to collect said resources. This can only be done once you’ve built the Hangar.

Resources such as wood are consumed by constructing new buildings, for example, the academy which unlocks your research tree. Make sure you balance things correctly otherwise you won’t have enough inhabitants to farm resources, research, or do other tasks such as building.

It’s all about the resources!

As we get more resources, we can increase the size of our kingdom, but be careful as you’re limited by tilt and lift. Tilt happens when you build too much in one direction of your flying kingdom. For example, if you build too much on the front of your town center, then you’re going to have tilt causing you some problems. Lift is what is required to keep your kingdom afloat. Without this, all that you have worked for will come crashing down to the ground. This ultimately causes the game to be over.

As long as you keep the balance of lift, tilt, stored resources, and where inhabitants are working, you’ll have a good experience. Coal is one of the key factors of keeping your kingdom airborne in Airborne Kingdom. Without coal, the aforementioned lift can not be powered and will again cause it all to come crashing down.

Whilst exploring the lands below, you will come across various structures you can send inhabitants down to investigate, such as Relic Ruins. These contain diamonds which you can use as a currency to barter with different cities which are built on the lands you are flying above.

These cities also serve a purpose in the game as they provide you with various quests such as finding certain items or areas, as mentioned we can buy items from them, as well as recruit new inhabitants for our kingdom. There is a lot going on in this game, and from the trailer down below it doesn’t look as complicated as a game as it is. That’s because it isn’t. It all seems really complicated but if you set yourself some time aside to learn the game, you’ll realise it all makes sense.

The graphics are OK. There’s nothing really dramatic going on with the graphics. The only real exception is the clouds that come and go as you move around the world. Framerates seemed a stable 30fps on the PS5 with no spikes or major drops. They are quite nice but for me, there was nothing that really popped out. I would have also expected better performance from this on the PS5 seems it has now been out for a year already.

The audio isn’t too bad, the music playing whilst you’re building up your kingdom is quite relaxing. City sound effects aren’t heard too much unless you’re zoomed into your kingdom. Which wouldn’t be too often in my experience. When you approach a land-based kingdom, you’re greeted with an audio cue of the hustle and bustle of that kingdom.

Being a city builder, this game can be as long, or as short as you please. You can save at any time and quit out. This is great as it then allows you to return at a later point in your day/week. You’ll start in the same spot you left off. The only thing stopping you is the production of coal to keep you afloat. The game also has 28 trophies to unlock including the platinum, for those who want to go for them.

Unfortunately, I just could not click with Airborne Kingdom. I felt rather bored whilst playing the game, which is highly unlike me with a city builder. The game does have some unique elements and mechanics to it such as the aforementioned tilt and lift but unfortunately for me, these didn’t help pull it out of the bag.