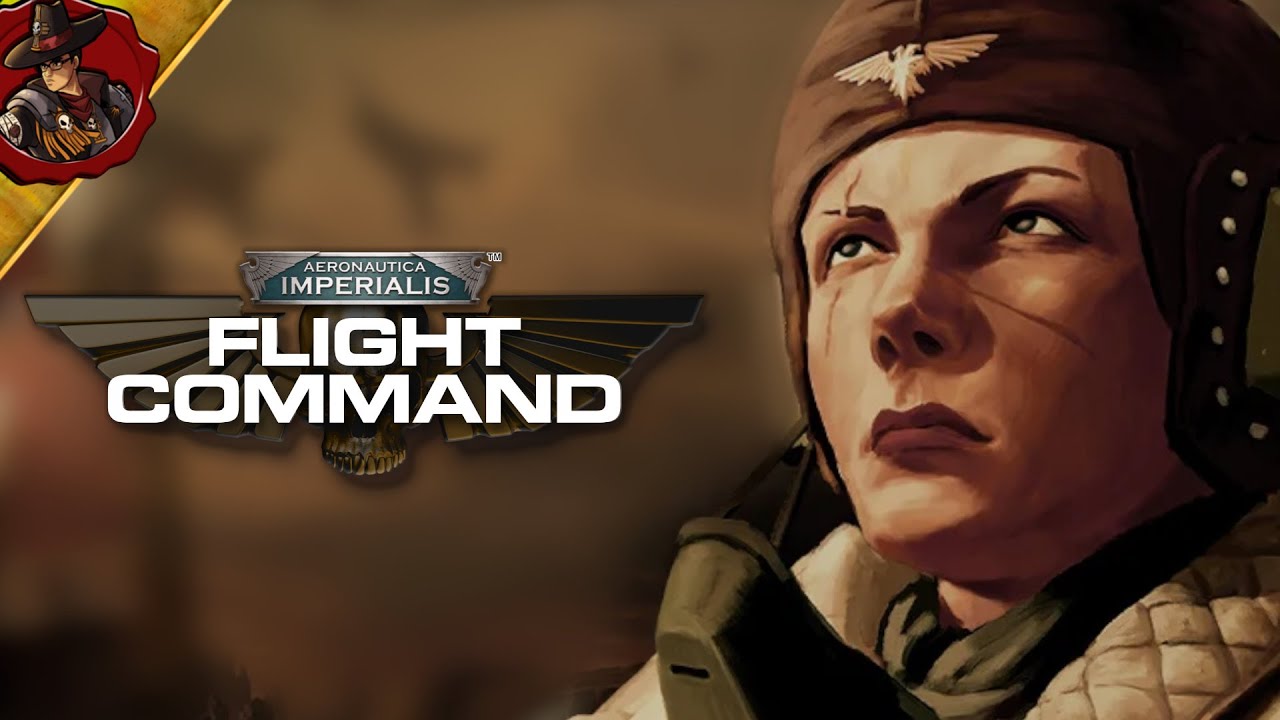 Binary Planet brings us Aeronautica Imperialis Flight Command, a Warhammer board game set in the skies but adapted for PC. So if you get RSI from rolling the die, or are a bit clumsy and keep on knocking your planes over or off course, then this might just be what you are looking for. Games Workshop have already done the hard work, so hopefully the PC version is true to the original. Time to exchange my bow staff for a joystick and geek it up.

Aeronatical Imperialis is essentially a 3D representation of a board game. I know, I’m not really selling it, but you need to hear me out.

The first screen I come across gives me my options: I can start a campaign, play individual scenarios or do the tutorials. So I did the sensible thing, yes really. I played through the tutorials. Each tutorial is very quick and within 10 of them, I knew every aspect of the gameplay. This was going to be a doddle. I went to Scenario 1… Surely this was going to be a walk in the park. Well, there was no park or walking. There was some foolhardy arrogance, a couple of big explosions and the embarrassing scoreline on my screen.

In Aeronautica Imperialis you control futuristic planes that try and shoot down the enemy without being shot at themselves. Each plane has a set of statistics and manoeuvres that it can perform. Not all planes are the same, some have better manoeuvrability than others, some are better armoured and some better armed. Somehow you have to get your planes to coordinate together to bring down the enemy. To do this you select a manoeuvre for each plane and then select commit. All the planes move at the same time, so you need to try and second guess what the enemy is up to, there’s no point sneaking up behind where they are on the screen as by the time you get there they might have done a power dive and are not even close to where you are. Essentially you need to pick a speed, altitude and direction and see what happens until tactics evolve.

The beauty of Aeronautica Imperialis is its simplicity to control. Picking up the gameplay is child’s play, but learning the tactics that you need to win is a little more taxing. Trial and error will come into play a fair amount, but every time you play, you learn, you improve and you get closer to winning, or if you’re already winning, closer to total annihilation on a regular basis. As per usual there are different playing levels, three in the case of Aeronautica Imperialis. Rookie, where there are less experienced enemies, Ace, where there are better-trained enemies and more of them, and Apostle where you are flying planes that are on fire, have no weapons, the enemies are doubled and all have 50 heat-seeking missiles on board. OK, that was a lie, but it’s bloody hard.

Being set in the world of Warhammer you get to play as the Imperial Navy, or the Orks, each side having different characteristics to its planes to enable different fighting styles to be incorporated. Try out both and see which you prefer. Obviously the main aim will be to complete the game as both sides, but a starting point is always useful. The other big choice to make is whether you want to take on another player from around the world, or the AI? Unfortunately, the online play is not working at the moment so I can’t unleash merry hell on the rest of the world, though that is probably a good thing for my sense of arrogance.

Once you are happy that you can fend off the enemies rather consistently take on the campaign. Set your victory points to determine the length of the campaign and get your pilots flying. After a number of kills your pilots will rank up and get special abilities, so try and keep them alive for as long as possible. Choose between the 2 scenarios presented to you, each one will be worth a number of points, win and you will be rewarded, lose and your score will go down. I would recommend doing the scenarios before attempting the campaign, but each to their own. This mode is where the great generals and flight commanders are made.

Aeronautica Imperialis is not aimed at those who have quick reflexes and thrive on the challenge of fast-paced gritty combat, but more the chess grandmaster that likes to hone their skills a little at a time. Once the command is given, all planes move on the screen at once and you see what happens. There are three ways to view the action, the story mode that cycles through the aircraft’s action one at a time, the unit mode that lets you focus on just one unit, or theatre, where you get to put the camera where you want and view everything at once. Theatre was definitely my favourite.

Whilst some aspects were very good, there was just one thing that really bugged me. My planes seemed to blow up for no reason. My first thought was that they would blow up at the end of movement if they were hit, but I noticed some exploding partway through. I checked every angle and whilst I could see them being shot at, I could see nothing that would make them explode. As you can imagine, this was very frustrating. I even switched to playing as the enemy to see if they had invisible ray guns that I did not know about. This was not the case. This is a major issue and needs to be fixed to either stop it happening, or hits on the aircraft need to be made graphically clearer.

Aeronautica Imperialis doesn’t amaze with the graphical content. Obviously planes look like planes, missiles look like missiles and the mountains look like, yes, you’ve guessed it, mountains. The user interface works well and everything is clearly presented to enable the player to get the most out of the experience. There are a few moments where the planes don’t seem to move as a plane should, but they always end up in the right position. They do the job that is required, but there is no wow factor. There was a few issues with reading the text that I am sure will be fixed very shortly, it’s generally a good idea not to put pictures in front of it.

Aeronautica Imperialis provides a very good militaristic soundtrack. Constant, steady drums get the adrenalin flowing to give a sense of urgency and desire to be victorious. Get close to a plane to hear the roar of the jets or the painful wail of a damaged engine. The guns fire, the rockets scream through the sky and the planes explode, preferably your guns and rockets and the enemy’s planes.

Aeronautica Imperialis has the ability to provide many hours of flying, frustration and fun. Levels of frustration are based on how good you are. The online option should keep happy pilots flying for a long time. Hopefully, Binary Planets will be adding a sandbox mode so players can build their forces and participate in epic evenly matched battles. Who knows, maybe a league table of the best pilots to ever take to the low altitude skies. I can see more scenarios being added and hopefully more campaigns to tackle.

Aeronautica Imperialis ticks many of the right boxes for me, importantly in the gameplay department. I found it hard to stop playing as I always just wanted to try out new tactics and was determined to win on all difficulties. You can play Aeronautica Imperialis for a little bit, or you can go for a mammoth session. It’s the sort of game that is easy to dip in and out of. If Binary Planets play this right, then they have a fully evolving game that will keep Warhammer fans and gamers alike happy for a long time to come.

Aeronautica Imperialis has flown its way to the dizzy heights of a Thumb Culture Gold Award.