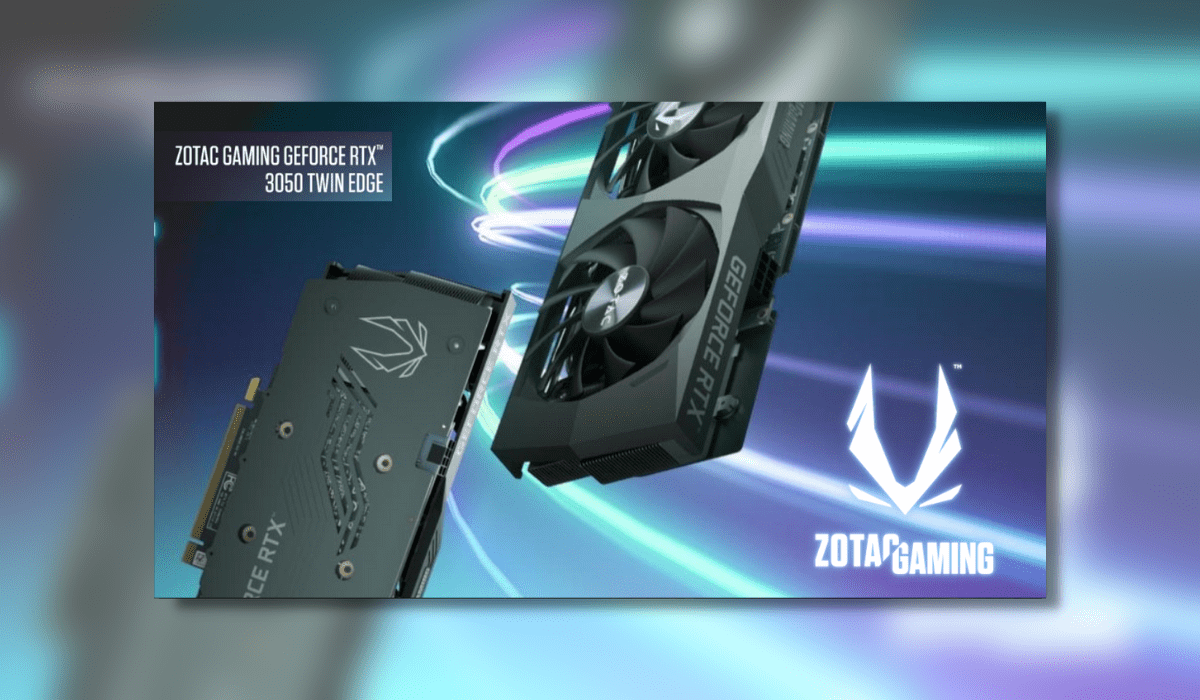 Zotac, known for their GPUs, have a breathtaking range available depending upon both your budget and build type. The team at Zotac kindly sent us over a few to check out, today I will be looking at the Zotac GeForce RTX 3050 Twin Edge from the lower end of their range.

Performance Without The Pounds

GPUs have become quite the talking topic over the past year or so. We have seen new releases and production delays, alongside the vast price inflation. It went from being able to buy a half-decent gaming PC for circa £800-900 to £1500+. However, with the release of the RTX 3050, could this be the changing point in the market?

The Zotac GeForce RTX 3050 Twin Edge is a compact card so lends itself to most builds from small form factors to the giant cases available today. The card sits at 221.1mm in length, 116.3mm in width and 39.2mm in depth. On the underside of the GPU there are 2 fans with Zotac branding, differing imagery on each of them. On the whole, the Zotac GeForce RTX 3050 Twin Edge is mostly grey in tone with black and silver highlights. I currently have the previous gen compact cards and have to say that the design on these cards is not only visually better but they also feel a lot sturdier in the hand.

Down the side of the card, there is the famous Zotac Gaming logo with bezel detailing running down to the Geforce RTX Logo at the end. A really sleek looking card no matter what build you are looking for. Unless you are looking for an all-white card. In that case, Zotac does actually have you covered with their 3060 range. If we then look at the top of the card there is a nice detailed plate, with Zotac/Geforce logo and lettering. This no-frills card doesn’t come with the likes of RGB like you do with the higher end Zotac cards but still looks great in a build. And let’s face it, not everyone likes RGB.

When it comes to spec, for a card with an MSRP at this level (Although yes, currently unavailable at MSRP) you get a good bit of kit. I think it’s worth stating that even at this low end you get the Nvidia Ampere Arch tech, Ray tracing and DLSS as standard.  So straight off the shelf, you are getting them extra frames due to supersampling.

When it comes to cooling, the Zotac GeForce RTX 3050 Twin Edge has Ice Storm 2.0 technology. This is Zotac’s answer to keeping the cards as cool as possible under load. From a design perspective, you can see upgraded fans, pipe layouts and a newly designed heatsink. You can also customise your cooling, this we will touch on a little later.

The Zotac GeForce RTX 3050 Twin Edge has an 8GB DDR6 video memory. When compared to the previous iterations of card ranges you get a good amount of VRAM for entry-level gaming. On top of what has already been mentioned this card has:

When it comes to setting your GPU up, there are multiple options. You can run with the factory settings straight out of the box if you are unsure of what to tweak. However, if you are comfortable with changing the settings of your card to give it a little more oomph then you can download Zotac Firestorm for free. Those who are familiar with Firestorm, will notice from the below capture that Zotac has updated the UI and it looks great compared to how it used to. Long gone are the contrasting colours from yesteryear and now we have a sleek interface to work from.

When it came to benchmarking performance, I used the Unigine products SuperPosition and Heaven. If we first take a look at the Super Position, I wanted to push the GPU to see what it was capable of and run 4K benchmarks alongside what I had already done. So looking at high settings on 1080p we can see the card pushing a max of 74.29 frames, however on a less optimised extreme setting we only see 30.88. This card is clearly not a high-end card so was not expecting anything amazing in this region. However, I am extremely impressed that it could handle up to 74FPS on a high setting. Obviously, we can see the more optimised run on 4K, although it’s not great. That result isn’t bad for a budget card.

When it came down to testing the card in-game, I played my usual lineup. By this I mean games that I regularly play, not games used to benchmark. After all, not everyone plays them either. I can honestly say that I didn’t see much of a difference from my usual gaming experience on the 2060 Super. Yes, I turned the setting down a touch on some titles but COD Warzone, for example, but it played well and looked great. Check out the screenshot below for stats in-game.

As someone who is fairly new to PC gaming along with the concept of building your own. Diving into the depths of GPUs has taught me a lot and showed me first-hand what I should really be looking out for. Is having the best GPU available on the market a good thing, yes absolutely. But These GPUs are not making gaming accessible to all due to their high MSRP, not to mention the actual prices they are going for at the minute. This is where the Zotac GeForce RTX 3050 Twin Edge really stood out to me. The MRSP compared to its counterparts is way cheaper to start off with. Not only that, the card itself is not bad at all when it comes to gaming.

Obviously, the numbers when compared to the more powerful GPUs aren’t all that impressive. But, when you jump into a game on most occasions, especially with the more optimised games you wouldn’t really see that extra £700+ from one of the more expensive cards. I, therefore, give the Zotac GeForce RTX 3050 Twin Edge a Thumb Culture Gold Award.

If you are currently on the previous-gen keep an eye on the site for an upcoming article comparing a 20xx series card against a 30xx series card.