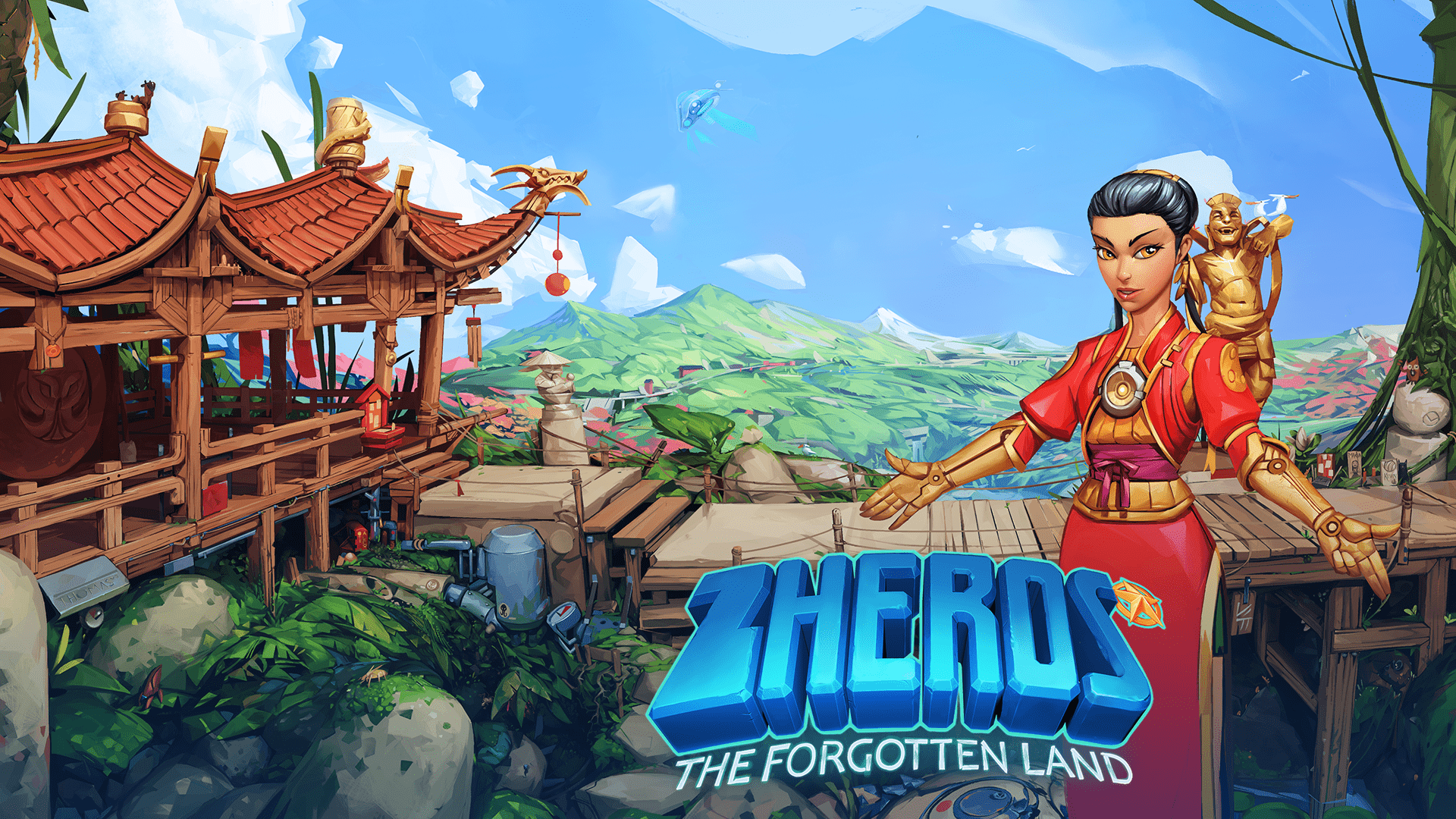 ZHEROS by Rimlight Studios is a fun, family friendly 3D beat ’em up that is available on Xbox One, PC and most recently PlayStation 4.  ZHEROS can be played either in single player or two player co-op mode.  Your mission? To take on an epic journey through distant and unknown galaxies in an attempt to stop the evil Dr Vendetta from taking over the universe with his mutilated twisted minions.

Rimlight attempts to bring back the classic sideways scroller beat ’em up that has been a successful formula since the days of Streets of Rage and Golden Axe.  So how does ZHEROS stack within this genre? Lets take a look.

Selecting your character you can choose to play as either the strong and dimwitted Mike, the smart and agile Captain Dorian or with the new “Forgotten Land” DLC, as Thione.

Having watched the opening cartoon cut-scene introducing the evil villain Dr Vendetta as he tries to unsuccessfully take over a planet, I was ready to be propelled into the action.  There are 3 worlds for the ZHEROS squad to bash and smash through; Sektor Zero, Wilderness and with the new DLC Forbidden City.  Each world contains between 8 and 10 levels including a boss battle.

Dropping into the first level of Sektor Zero I quickly became a custom to the basic controls of my character, Mike, as I proceeded to destroy nearby orange crates and collect tokens that could later be used to boost my character’s statistics.  As I began my stroll further into the level I didn’t have to wait long to have my first encounter with the enemy and boy was I ready to mash those controller buttons!!

Three robots armed with laser pistols rapidly met their demise with a combo of light and heavy attacks, pounding their little robotic minds in with my fists.  I won’t lie, it was very satisfying.  As I travelled along the wide and vast walkway I was met time and time again with more robots, destined to try their luck but instead were disposed of with a multitude of punches, kicks and aerial assaults.

As the enemy exploded into pieces on my screen, blue tokens were released that increase the bar sitting below my health.  What were they for I wondered? suddenly before I could make sense of it all, the tempo of the background dance track increased as did the volume.  Mike was under attack from a large enemy horde!  There was no chance of escape as the next section had a purple force field in place preventing me from running away, it’s time for a fight to the death, thunder-dome stylee! Holding R2 on the controller, Mike pulled out a giant gun and proceeded to destroy everything in his path, all be it for a limited time as the blue bar rapidly depleted.

The screen was a flood of cartoon writing detailing the hit points caused by the attacks along with dynamic reactions such as the words “Explosive” or “Evasive”.  The feel of it all brought back many old school arcade game memories and once the level was finally over both myself and Mike collapsed onto the floor.

In between levels if you have collected enough orange tokens you can boost your character’s stats such as strength, weapon and shield.  Each upgrade unlocks either new attack combos or abilities.  The ever growing move list can be viewed at any time which is handy when you have a memory like me, however discovering new button combos while mashing the hell out of the controller is always a welcoming reward.

Each level gets progressively harder with new environmental obstacles such as lifts, electrified high jumps and vertical laser beams.  The enemy become more and more sophisticated and require different combos to efficiently attack and quick button pressing is essential to evade their retaliation.  Health can be regenerated by collecting green energy boosts within smashable canisters.  Every so often during a level when you are inundated with enemy there is a chance for your character to jump into a Mech and completely obliterate everything on the screen either through weapon attacks or robotic muscle!  There is a real sense of achievement when you have successfully cleared your path of enemy.  Be warned, should you be killed, the check-points are few and far between, however in co-op mode your partner can revive you, another nod to the classic side scrolling genre games of the past.  This isn’t an easy ride!

Having had a warm up on the original content it was time to have a play on the new Forbidden City world that is included with the Forgotten Land DLC.  Bursting with 8 brand new levels, the first level opens up with a cut scene introducing you to your new playable character, Thione, a mystical female martial artist also hell bent on stopping Dr Vendetta.  Far Eastern music begins to softly play as you become aware of your cavern like surroundings before the music ramps up as the first wave of enemies appear.

Thione is a lot more agile when it comes to fighting as she performs combo after combo, flitting across the screen and lighting it up with destruction.  The Forbidden City is beautifully presented with mesmerising scenery, bright contrasting colours and attention to detail such as dynamic glowing embers and torches that give the game an immersive arcade feel as you run across bridges and drop down through caverns.

The Forgotten Land DLC is worth having if you are to buy ZHEROS as it adds slightly more longevity to the game and Thione is a fun character to play as due to her lightning fast moves.  I did have a few blue screens of death while playing the new DLC however this was not long after downloading patch 1.03 and maybe an accidental bug that has found its way into the game.

ZHEROS fits into the beat ’em up side-scrolling genre well and is a fun to play beat ’em up game with a progressive difficulty that keeps you on your toes as you delve further into the story.  I wouldn’t say that the game stands out hugely however it is set at a reasonable price for the value that it returns and my children really enjoyed it.  The action is plentiful and is perfectly combined with the thumping soundtrack that aids to boost your adrenaline when the enemy flood the area.

It would have been nice if player 2 could of dropped into the game “coin-op” style rather than the need to start a new game specifically for co-op as I found myself creating two saves so that I could play solo and also with my sons.  The game play is slick with many attack combos to learn and lots of varied enemy, although early on in the game it did feel as though I had too much space to move around in and on occasions the enemy spawned behind me once I had passed a point, making me turn around to face them.  That being said if you fancy some arcade button mashing fun with lots of combos, explosions and giant mechs, then ZHEROS is for you! I award ZHEROS a Thumb Culture Silver Award