That’s right, it’s time for me to talk about Yakuza again… It is of course one of my favourite game series to talk about & this time it’s to look at the re-make of the PS2 game Yakuza 2; Yakuza Kiwami 2. Just like with Kiwami, the hopes here are that it’s bigger, badder & well just better all around (fingers crossed) than the original from 10 years ago.

Before I get started here, I am going to assume that if you’re looking to play or researching this title then you already know about the series and have played at least one of the previous titles (as this is the 3rd game in the series).

While I have tried to avoid it, there may be spoilers for Yakuza Zero / Kiwami mentioned below (you’ve been warned!).

For the benefit of any newcomers who may not have played the others, I would recommend going to have a look at our review of Yakuza Kiwami (here) before getting too involved in the below (Don’t worry… we’ll wait while you go catch up!).

All ready? Let’s see what Sega have given us in Yakuza Kiwami 2… 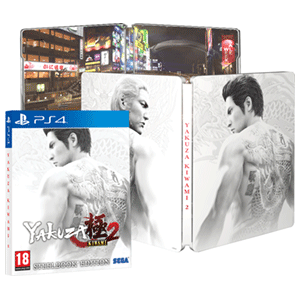 Another Beautiful Steelbook for the Collection!

Yakuza Kiwami 2 takes place exactly 1 year after the events of Kiwami & as in the other games continues the story of Kiryu Kazuma with his struggle to break free from the life of a Yakuza without destroying the Tojo Clan in the process (given the state of affairs at the end of Kiwami).

We also get to see a little more history behind some of the side characters in Kiwami here as well (such as Detective Date) which is always nice.

As is to be expected from the Yakuza series, Kiwami 2 is very rich in story & always keeps you on edge wanting to find out that little bit more. So when you plan to spend an hour here, leave yourself 2 or 3 just to be safe.

In typical Yakuza fashion the game is filled with both serious compelling story to pull you in. But also sprinkled with extremely unique & wacky sub stories plus mini games that will make you question if this is the sort of game you want to play? (The answer is always yes!) 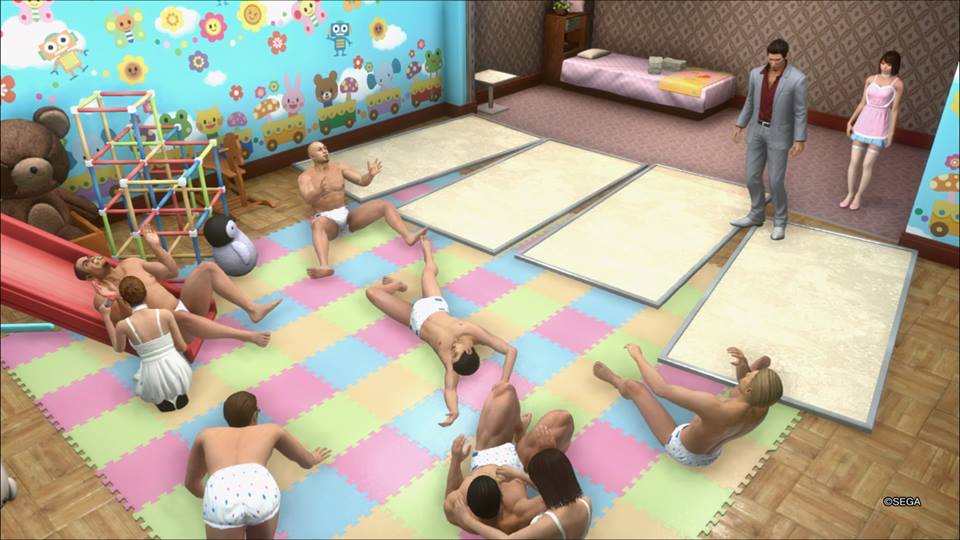 Grown men in nappies… Now that’s something I haven’t seen on a PS4 before!

If I put my critical hat on & compare Yakuza Kiwami 2 to the previous instalment Kiwami. For the most part the game is very much the same. Same characters, same city, etc. This isn’t a bad thing by any means as Kiwami is an amazing remake. It does however mean that the majority of the gameplay is also very similar & if you weren’t a huge fan of Kiwami (not only do you need to seriously think about your life as a gamer!) then I’m not sure this is going to change your mind.

That said, there are some improvements & new additions that add to the gameplay & make it feel like a new experience for anyone that enjoyed Yakuza 2. Also it’s a more well-rounded experience for fans who didn’t get to enjoy Yakuza 2 originally.

As I mentioned above, you would be forgiven to think they have just taken the work they did on Kiwami & copied & pasted the formula to fit Yakuza 2. You would actually be right to a certain point (I suppose the phrase ‘if it isn’t broken, don’t fix it’ comes to mind). There are some differences that make it fun & fresh even for hard-core fans of the series to enjoy.

For starters the fighting system has had some changes. This may be down to the implementation of the Dragon Engine from Yakuza 6. I can’t say I noticed anything in the combat that would pull me away from the system I know & love from the previous games. It’s just a little more polished & well rounded. Fighting multiple enemies seems to flow a little better that it has in previous games.

Something that has become a little favourite of mine in combat is to throw enemies into shop windows. They actually smash now & the shop staff refuse to serve you if you go inside after the fight. They demand you leave or they will call the police which adds a nice touch. 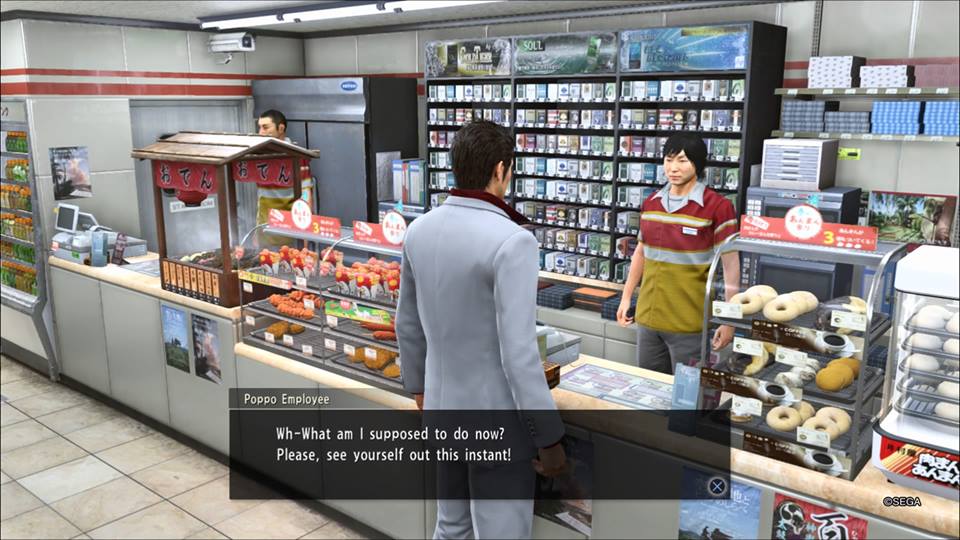 The upgrading system seems to be where the most changes are in terms of the combat setup. I can’t say that it’s really better or worse, just a little different. I think the best way to explain it is that it’s more the process of unlocking the upgrades that has changed rather than the way you go about earning the EXP.

Instead of just earning one set of EXP & choosing what to purchase, it’s now split into 5 categories (which are colour coded) & you earn EXP points in each one. Then the upgrade options available depend on what you have available in each section. 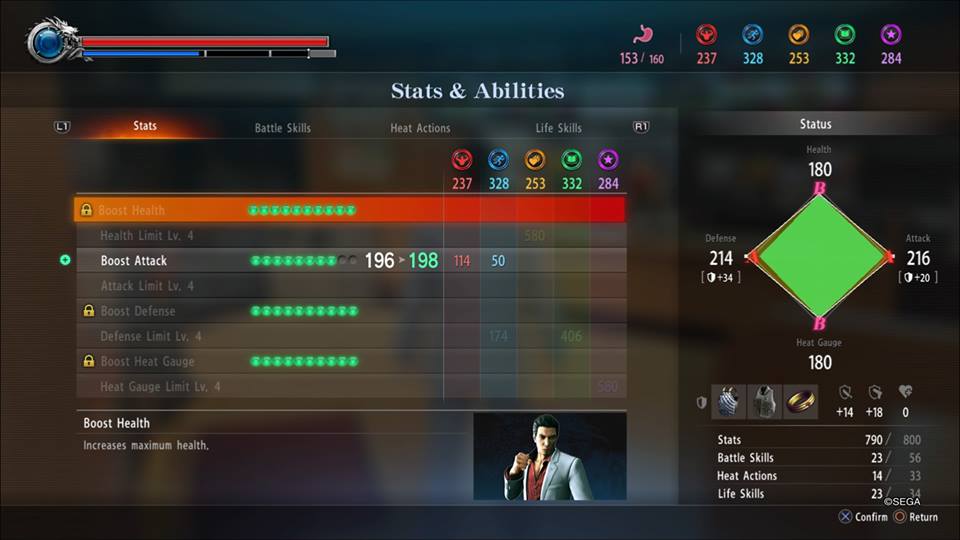 A new feature is the hunger level, which is shown in the top right by the image of a stomach… (How do they think this up!). Yes, you guessed it. Travel around eating at every restaurant you can as not only does it increase your heat level & health. You also earn a ton of EXP points as well which is a really great way to bump up those upgrades quickly. Just remember to make sure you’re hungry or you won’t gain any EXP by eating.

Of course it wouldn’t be Yakuza without all the mini games to distract you from the story and turn a 30 min game session into 3 hours. Kiwami 2 deliveries all the favourites that you would expect to be included; Batting Cage, Coliseum fighting, Claw machine etc. along with a selection of Sega classics in the Arcade for you to enjoy (Virtua Fighter makes a nice appearance here).

We also see the return of a Yakuza Zero favourite in the Cabaret Club. This was the only thing missing from Kiwami that I actually wanted, so I’m really glad to have it back. I won’t go into detail of the mini game itself as it is exactly the same as it was in Zero (which you should have already played by now!), just with a slightly adjusted storyline to include Kiryu instead of Majima.

The other new addition to the Kiwami series is the return of Clan Creator (from Yakuza 6). This time in the form of Majima Construction. For those of you not familiar with this from Yakuza 6, it’s a top down RTS style mini game where you have to protect the construction site & equipment from the rival crews looking to take control of Kamurocho Heights / Purgatory. 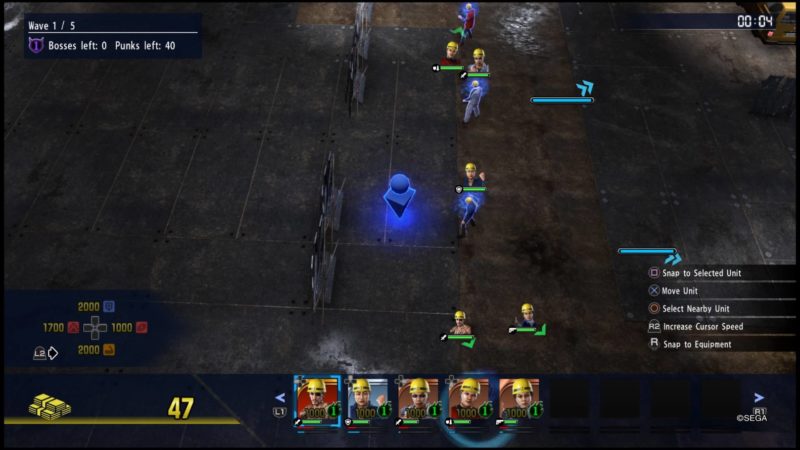 Yakuza Kiwami 2 is definitely packed full of gameplay options to keep anyone busy for a length of time & I challenge anyone to argue that it’s not good value for money because of it.

I think it’s very easy to look at Yakuza Kiwami 2 & think it just looks the same as Yakuza 6 or Zero or Kiwami. But what I see when I look at Kiwami 2 is the huge step taken in terms of standards since the original back in 2008. 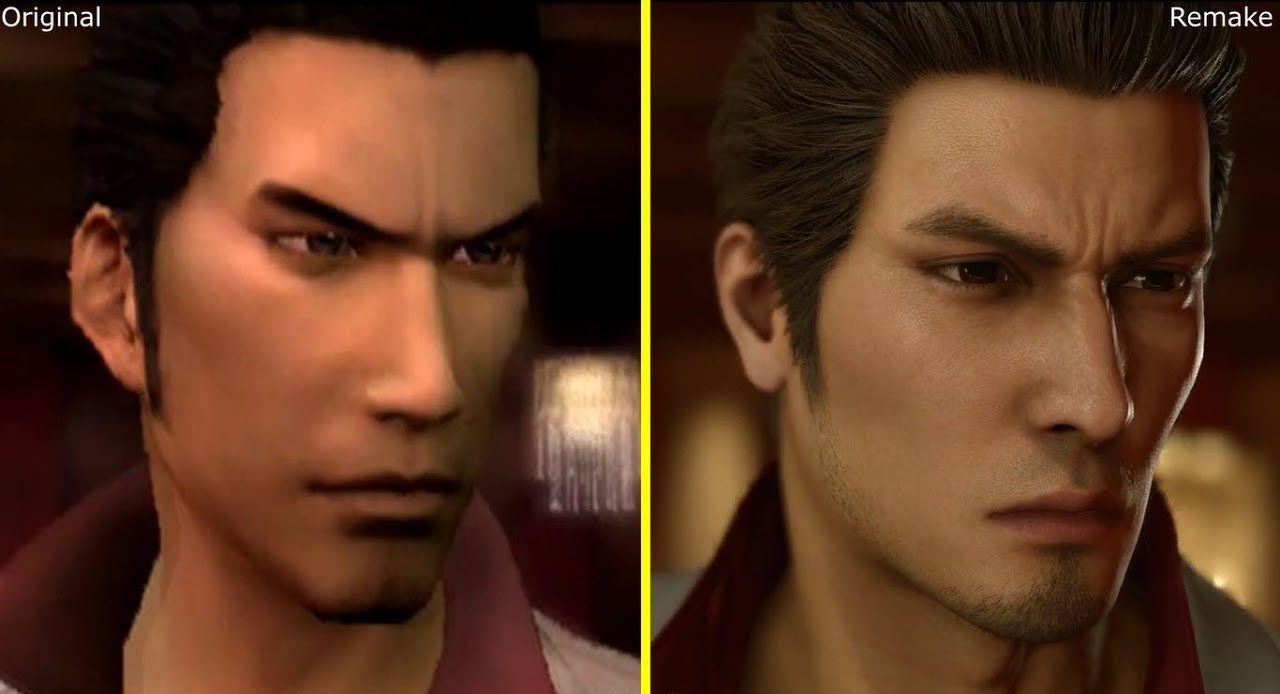 If you look back over the games we have had re-masters of then I think you can truly count on one hand the games that have made you step back and just take a moment to appreciate the work they have done. Not just to make it feel like playing the old game on a new system, but to make the game feel like it belongs on this new system. Yakuza Kiwami 2 does that without a doubt.

Putting aside that it’s a remake & just looking at it as its own entry. It still has incredible visuals with great facial expressions. The city landscapes look amazing & having gone through the whole game, I didn’t notice anything significant with frame drops.

Something I specifically enjoy with Yakuza is how alive the cities & world seem, considering it’s the same city (Kamurocho) from Kiwami, I was happy to see that it didn’t feel stagnant & repetitive. 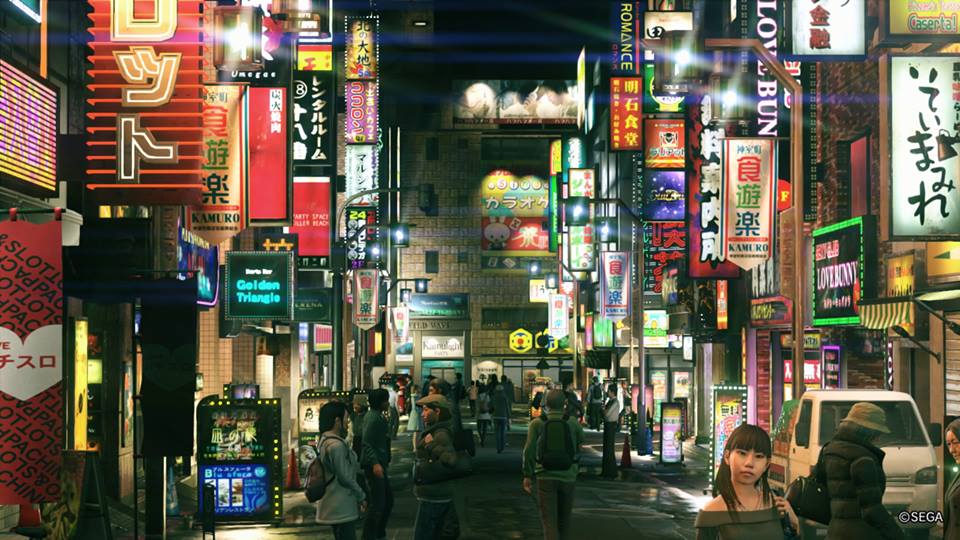 Is there anything I would highlight as a problem? Perhaps the camera angles at times are a little off putting. But I’m still undecided if that’s an issue with the graphics or just my poor controlling of the camera (quite possibly the latter).

All in all, if you liked the look of Zero & Kiwami, you really won’t be disappointed here.

This is the one area that I think puts a lot of people off playing the Yakuza games, due to the lack of English audio. That being said I think any foreign movie fan will agree, it’s usually better to watch the movie with the original audio & read the subtitles as you get the true feelings & expressions that the Actors and Director wanted to portray. This game is no different & I urge everyone to at least give it a try.

Another reason to enjoy a game in a foreign language is that you don’t notice when the AI uses the same basic phrases over & over for the NPC’s.

Yakuza Kiwami 2 has an amazing soundtrack that adds an atmosphere to the world as well as being subtle enough that at times you don’t even realise it’s there.

Is Kiwami 2 going to be a game to play over & over again, truthfully, probably not. But that doesn’t mean that there won’t be parts that you want to go back to every so often. Most notably the mini games.

Given that the game is very story rich & linear in its progression, I doubt people will go back & replay the story over & over constantly. Things like the Cabaret Club, Karaoke etc. however are extremely addictive. Even now I find myself putting the game in with the intention of playing the story, but end up playing mini games instead.

Now for those trophy hunters out there, Kiwami 2 contains a fair number of trophies, however at least half of them are story based & as such don’t require much additional work to get. Although, it will require you to 100% complete the game on the highest difficulty with all sub stories, mini games and collectibles included if you want the Platinum. So it should keep you busy for a while at least.

I don’t think there was ever any doubt that Kiwami 2 was going to be a well done re-make of Yakuza 2. Given the work that was put in to Kiwami & Zero it was almost expected. I think that Kiwami 2 goes a step further & actually should be put as a sort of benchmark to show what can be done with classic games.

Not only does it re-tell the story for a whole new generation of potential fans, but it adds a ton of all new content that make it hard to resist even if you already own the PS2 version.

Is it perfect? No, but neither is the original so I never expected it to be. A game doesn’t have to be perfect to be enjoyable, it just needs to be fun & this is definitely the case here.

Yakuza Kiwami 2 whole heartedly deserves the Thumb Culture Gold Award. I truly hope the rest of the series get the Kiwami treatment in the future.