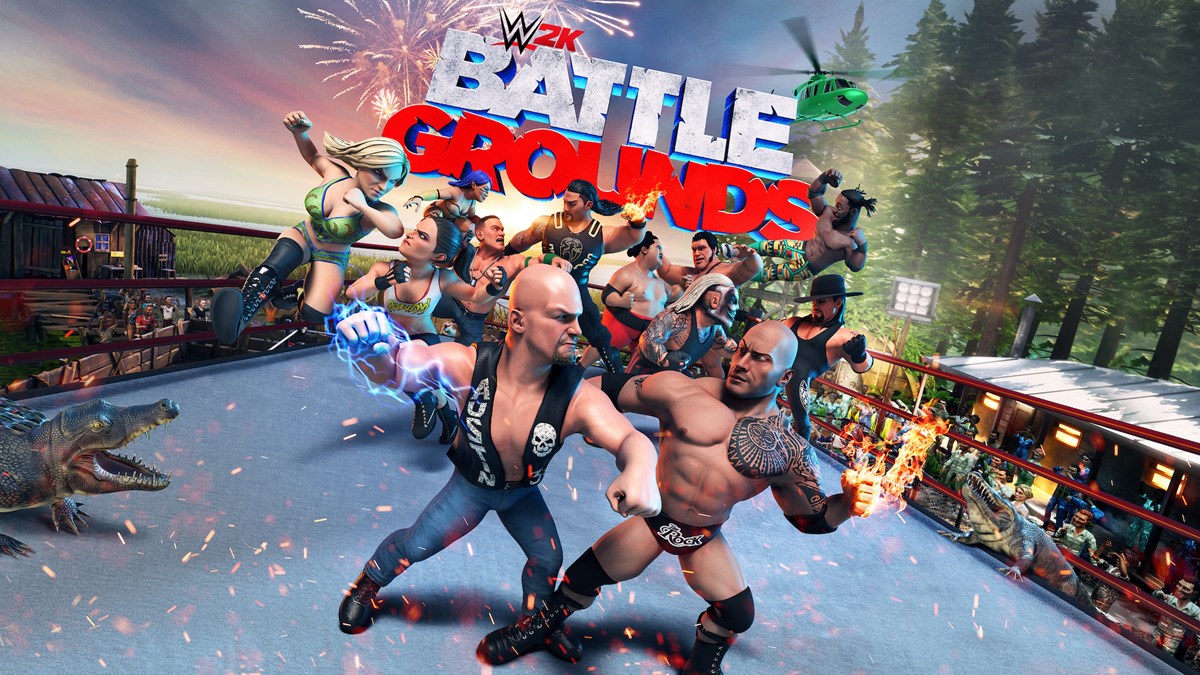 This year 2K are not bringing out their yearly iteration of the WWE franchise (might be for the better as last year was, not great shall we say) but have gone a similar route that they did with NBA 2K Playgrounds were they brought in an over the top street style basketball which was very well-received.

So going in that direction, 2K have brought out WWE 2K Battlegrounds. Moreover the top (ropes), in your face action pack Wrestling with past and present superstars which you can make your dream matches come alive.

So let’s see what the Rock is cooking when WWE 2K Battlegrounds runs wild on you!

Before the return of a WWE game on PC in 2015, the last time I played a wrestling game was WWF War is Raw.  A classic and has always been the style I liked.  A brawler / beat up em style wrestling game that didn’t necessarily run on a story but you can have matches and really beat up your opponents with different combos.

On the outside, this is how WWE 2K Battlegrounds resembles.  I beat em up battler with a twist (of fate) of old school button basher like WWF Wrestlefest.

Loading up, you’re presented with a nice and bright 90’s looking menu system that you really can’t miss and hitting you in the nostalgia area.  This certainly looks like a bit of a fan service has gone into this one. 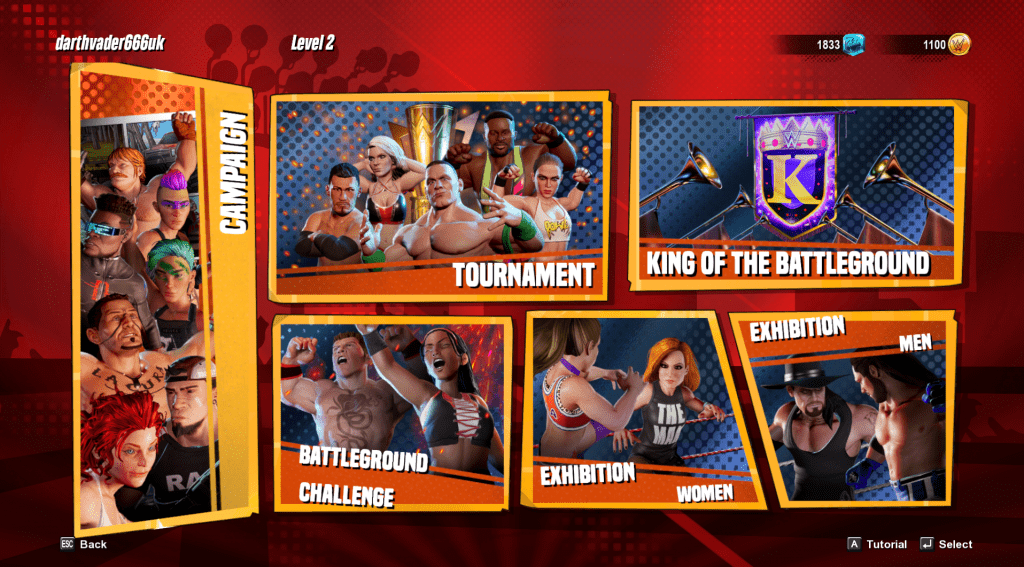 When selecting play, you are present with the up above menu, from here there are a few options but I recommend starting off at the campaign.

The Campaign is a story / tutorial that introduces you to the game, the fundamentals and selection of gimmick matches that you can do which leads you to a contract to the biggest stage of them all: WrestleMania.  I chose the rookie Bolo Reynolds as I progressed through the story 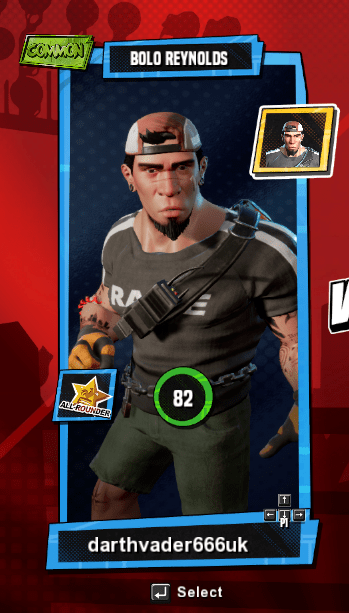 One of the cool things when progressing through the story it’s an interactive comic book and tells the journey of your character as you progress.  Its actually quite cool and a good way to get a feel for the game and it’s a local experience too, a mode for those who don’t like to play online. 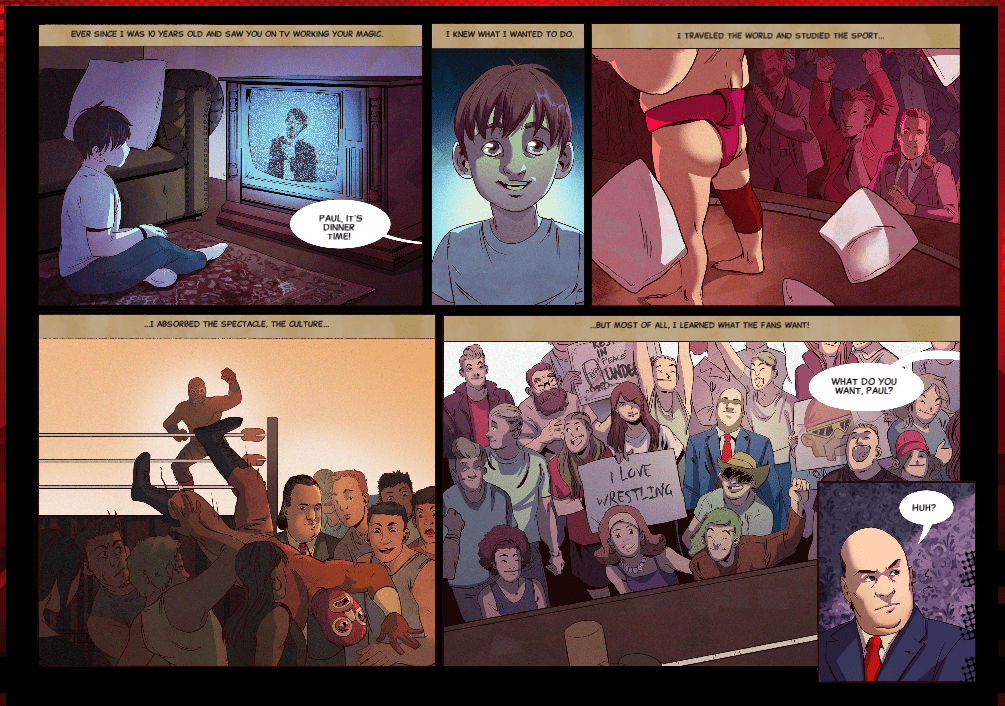 This is a tournament for your superstar to complete against other players around the world.  This I believe is what the game is mainly aimed at as it gives the opportunity for players to be the ultimate superstar. However, it does require Battle Bucks and Golden bucks, this is where the 2K Micro transactions unfortunately come into play but can be earned in other modes too. 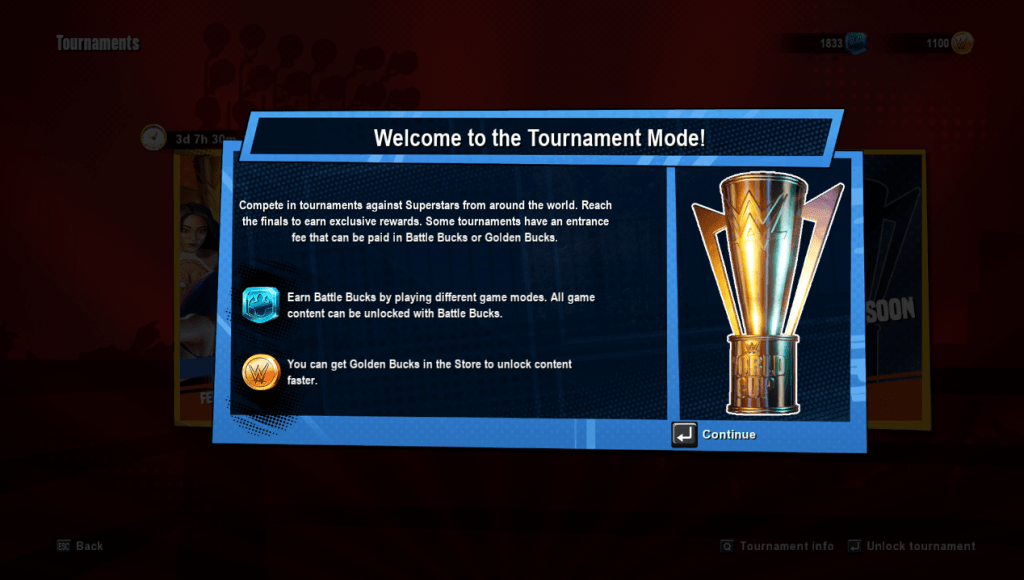 King of the Battleground

Outside the Tournament, this is without a doubt the area that backgrounds is focused on and, its fully cross-play between all platforms.  When I did first load up the game, cross-play was off so it is important to enable this as it allows for more games and easier to get into. King of the Battleground itself starts off with 4 players in the ring while 4 outside the ring are waiting. It’s a gauntlet style match where once a player is eliminated over to the ropes (currently there’s a bug you can get eliminated going through the ropes *Queue Shawn Michaels Royal Rumble Rule Change) or pin fall, the next one enters.

Its fun and takes away the manitous that single player can get (lots of buttons bashing) however my first King of the Background I enter as the Dead man; The Undertaker and, I WON! 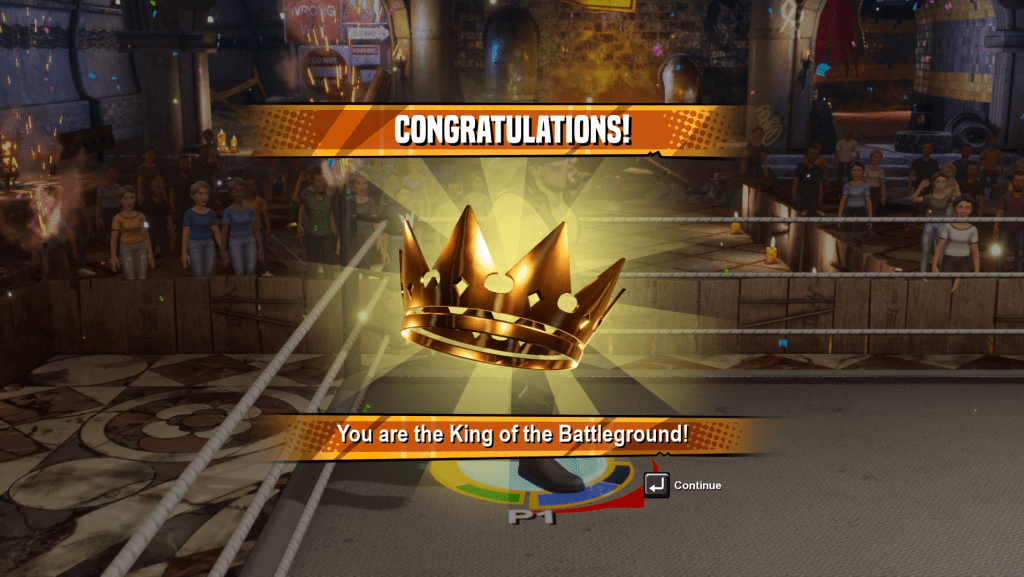 The other modes are Exhibition and Battleground Challenge which is essentially the same as Campaign but your own superstar you create where you build up the ranks to gain XP to build your superstar up. Even though you can earn everything in the game, you can “skip to the end” and buy stats to boost your superstar.

There are 3 different skill sets of high-flying, technical or brawler, and they are part of each type of superstar so almost most have pretty much the same play style but with a little difference in the final moves.  It’s keeping it simple without too much to learn if you want to try a different superstar.  During the match you will get power ups to break up the fight to keep it interesting.

Which brings us top the moves: Kick, punch, grapple and select direction for a different move.  This game really defines the “5 moves of Doom” as there isn’t much difference with the skill set and it leads to an old school button bash like Wrestlfest however, for some unknown reason, you have to repeatedly smash the bumpers to get up from the mat.  It’s not brill that idea, why didn’t they keep it to A/X?

This combat can get manitous (as mentioned up above) so having your mates or online play to mix things up will keep the game interesting.

Yes, you can play the game, unlock skills and superstars by playing the game however, it can be quite in your face with 2K letting you know you can basically buy your way ton the top.  This is how the Microtransaction superstar store looks: 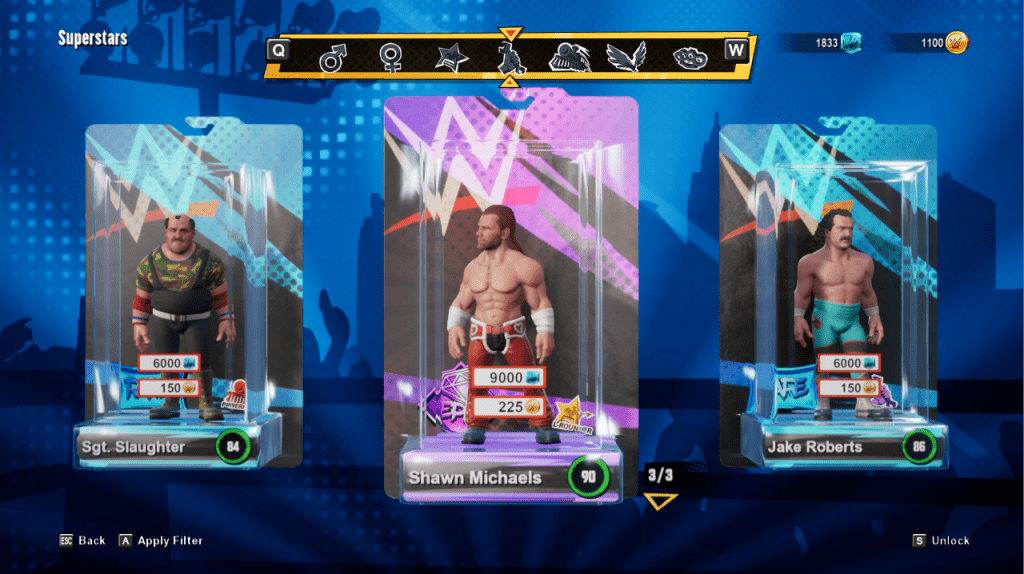 It actually looks cool as it looks like wrestling figures in a store but, they work out around £2 to £3 per superstar but of course, you cant just buy them with cash, no, you have to buy money packs which, will end up being a little more expensive: 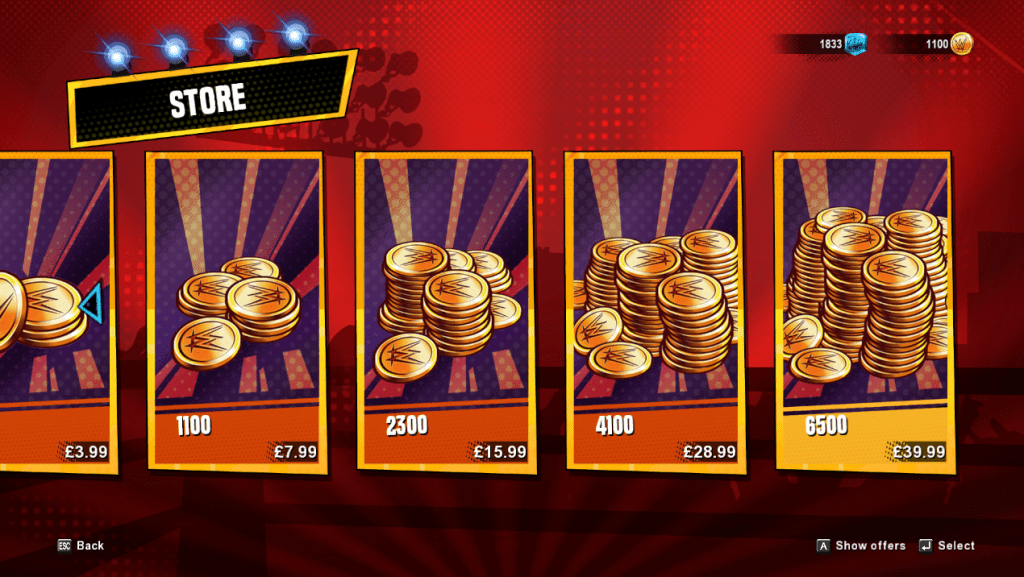 A bit naughty but something we usually see from 2K and untimely will suit the hardcore players of the game.

Over the top, big, dumb and fun graphics with a cartoonish style pops on the screen.  Its fun and its what you kind of want from a brawler game.  I mean you can feed your appointment to the alligators in the swaps.

There are limited graphics options to select on PC which historically (in other games) indicates its optimised or don’t require much graphic intensity and it does look nice.  I have not played the switch version but apparently that’s quite nice looking too. 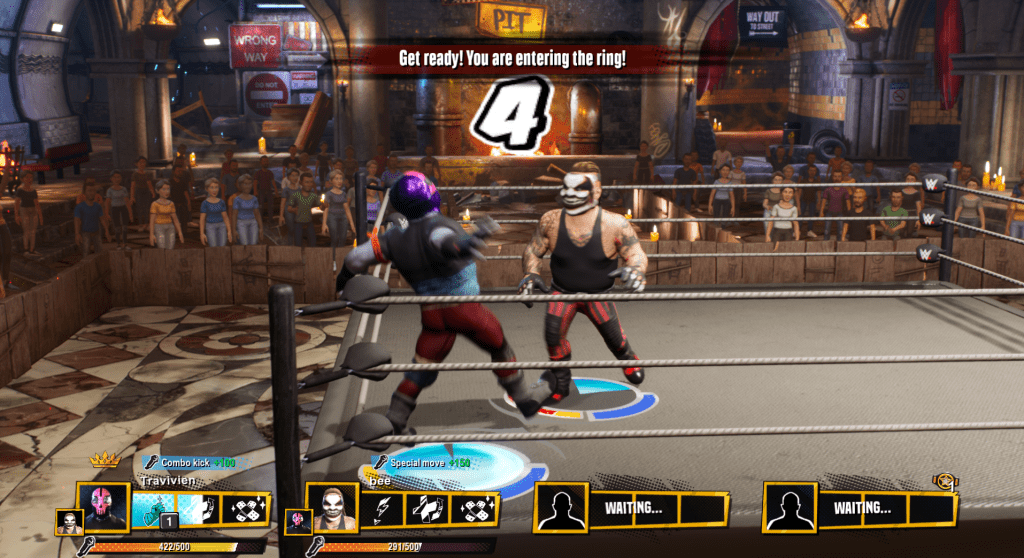 An unusual pairing but Mauro Ranallo and Jerry ‘King’ Lawler are the commentators for WWE 2K Battlegrounds but it works.  It’s over the top commentary and loud and suits the game style and actually gives it the legitimacy its looking for.

Music wise is the usual mix of pop and metal that you hear during WrestleMania weekend, albeit by artist unknown. 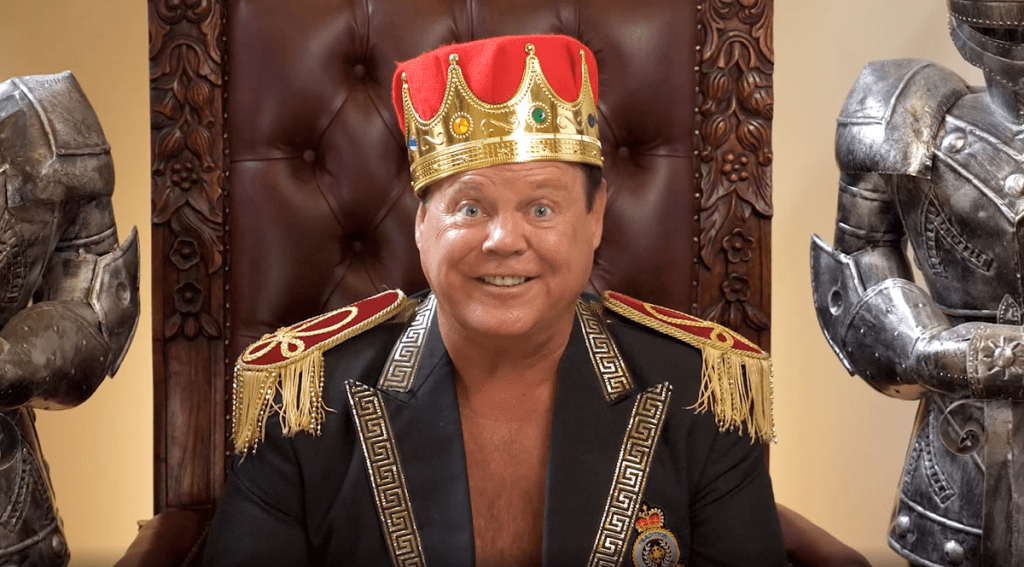 As good Ol’ JR says “It’s a Tough Call King” and he’s right. For me, WWE 2K Battlegrounds is a good for about an hour or so stint of playing some single player and multiplayer matches but as there is quite a demand for bumper button bashing (more so online) there’s only so much I can take of it at a time.  That being said, its very fun and I keep going back, adding it into my mix of games for a “cool down” just like a bout before the main even at Mania.

However, I can see the flip side that some old and new school fans will get into this and want to collect all the wrestlers and competing in the online matches.  I mean who doesn’t want to see Andre the Giant Vs The Rock? 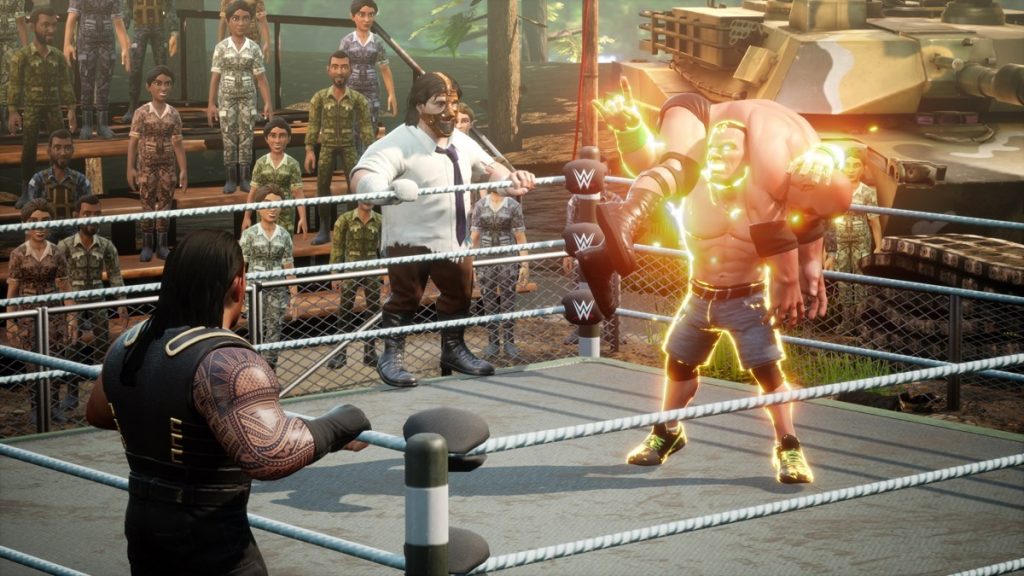 Whether your Ric Flair being a 60-minute man riding space mountain, The Rock who always smells what you’re cooking or when Rowdy Roddy Piper came to chew bubblegum and to kick ass but was all out of bubblegum; there is something to find for all wrestling fans of WWE 2K Battlegrounds.

Yes, its has a lot of Microtransaction focus which can be hard to look past as it’s a brawling, button bashing squared circle action pack fun with all sorts of gimmick matches that you can have with the Computer, your mates or people worldwide.

If you’re willing to put the time in, then you can unlock your favourite superstars but overall the game is a great filler between other games and with a low price, I think the wrestling fan inside would appreciate it. For this, I am giving WWE 2K Battlegrounds the Silver Thumb Culture Award. 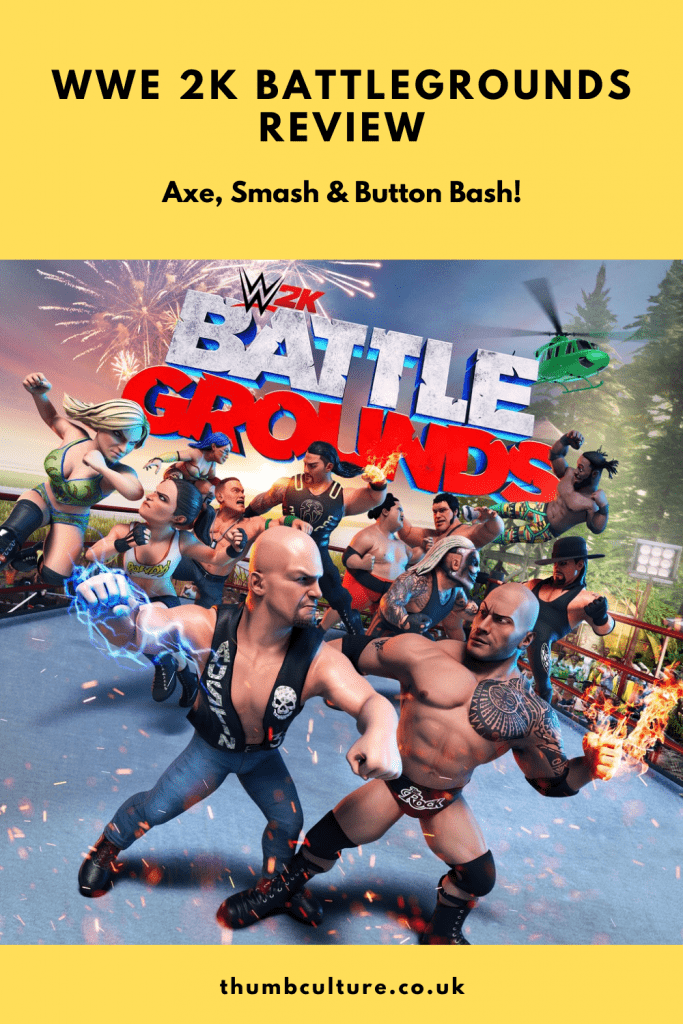