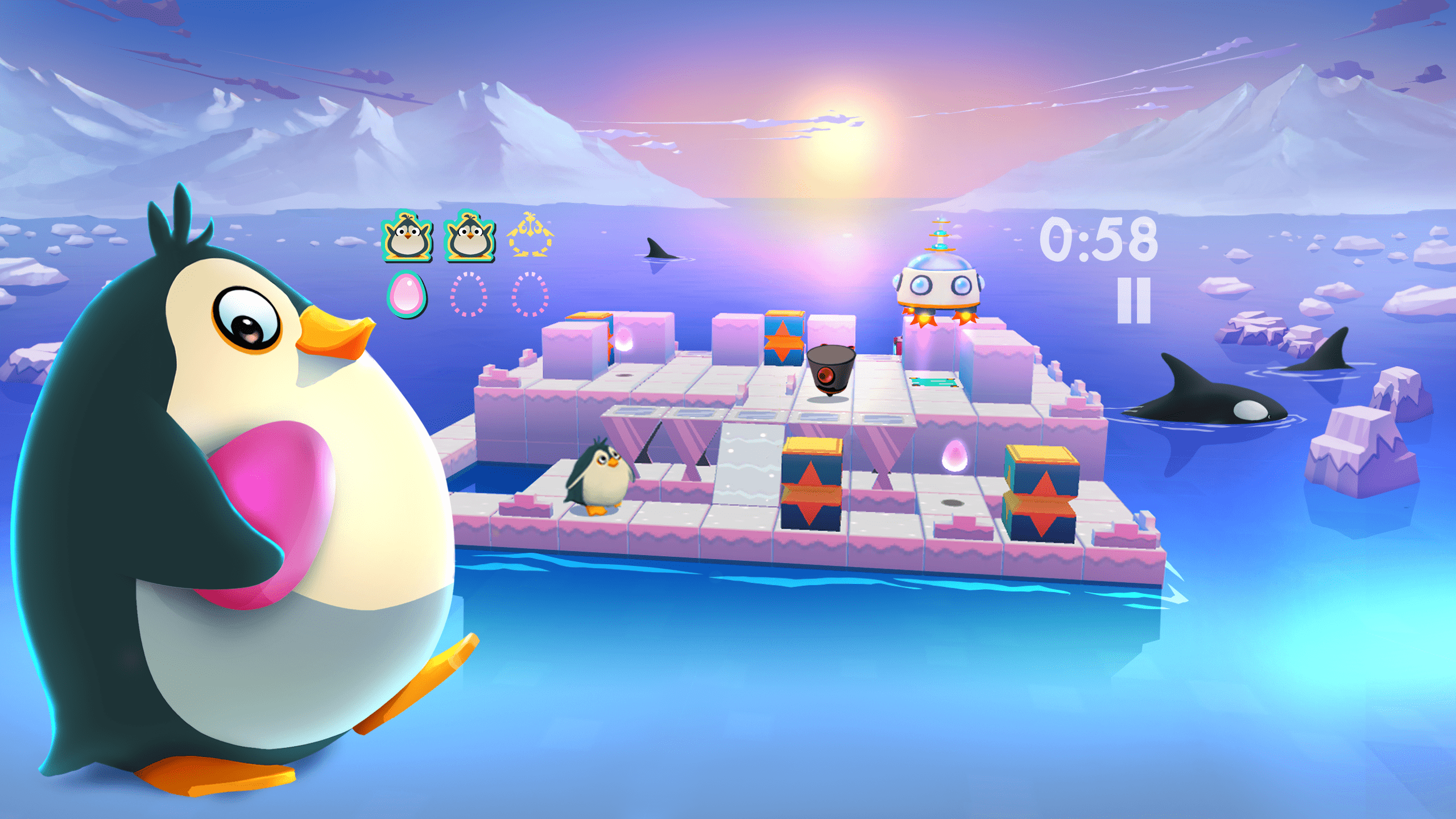 Waddle Home is a game about rescuing cutesy little penguins, what I’m saving them from is beyond me. Although I’m leading them to a rescue ship which looks exactly like a UFO. Wait it is a UFO, surely that’s abduction right? Am I leading poor, defenceless penguins to be abducted by aliens for testing? For all I know I could be sending these helpless penguins to their doom. Luckily the game leads you to believe you’re doing good, so I’ll just agree for now. The game is available on PSN, Steam, Oculus and Samsung Gear. This was on PSVR 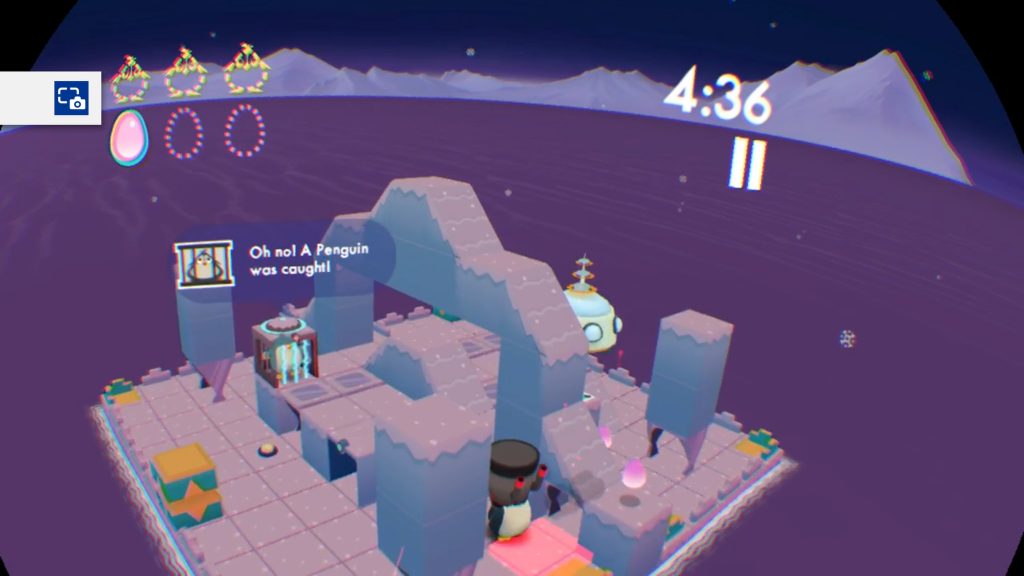 Starting the level off, you see a caged penguin. Aiming the beam ’emitted from the PS4 controller’ towards the cage then a simple tap of the X button releases the penguin. When I think about penguins, I think of them waddling along anywhere they please, the only problem is that these aren’t your average everyday penguins. When you release them from the cage they don’t scatter like they’re in danger, they just casually waddle along in a straight line, not a care in the world. Here comes the main problem, when the penguins collide with anything they turn right and then go straight again. They repeat this over and over until they get to their final destination the UFO.

Hidden around the levels are three pink penguin eggs, these are fairly easy to get as they’re not exactly hard to miss. Collecting the eggs isn’t too much of a worry, although collecting them can earn a couple of trophies. Can’t be leaving the penguin eggs now can you, they’re not going to help themselves! There are pillars that you come across in the levels, you can change the height of these. A simple tap on the X button and you can raise or lower the pillar, this acts as a block to change the penguin’s direction also a lift to reach higher points.

After collecting the first three eggs, I sent the penguins to their doom the UFO that is. Surely I’m doing this for good right? Several levels in and I was introduced to the evil robots, spewing out black fumes into the air. Obviously, this isn’t good for the penguins or the antarctic.

The robots act similar to penguins in the way they move, they move in a straight line. The difference between the two is when you hit an obstacle, with the robot you move left instead of right. The penguins are no match for the evil robots, if they come into contact the robot says destroy with its evil robot voice. Luckily they kept the game penguin friendly, although I was hoping for some blood and guts. The penguin wasn’t harmed, they’re just returned to the cage ready to be released again. For me this took away from the fun, with no way of losing the level it made the game really easy.

For about thirty stages the levels were relatively easy, there were a few that had my mind boggled and took a couple of attempts to do. At around stage thirty, the game gets extremely hard, it came out of nowhere. No slight build-up of difficulty, just really easy to extremely hard in the space of a level. Up until this point levels would take anything up to two minutes, it started taking anything up to ten minutes maybe more. 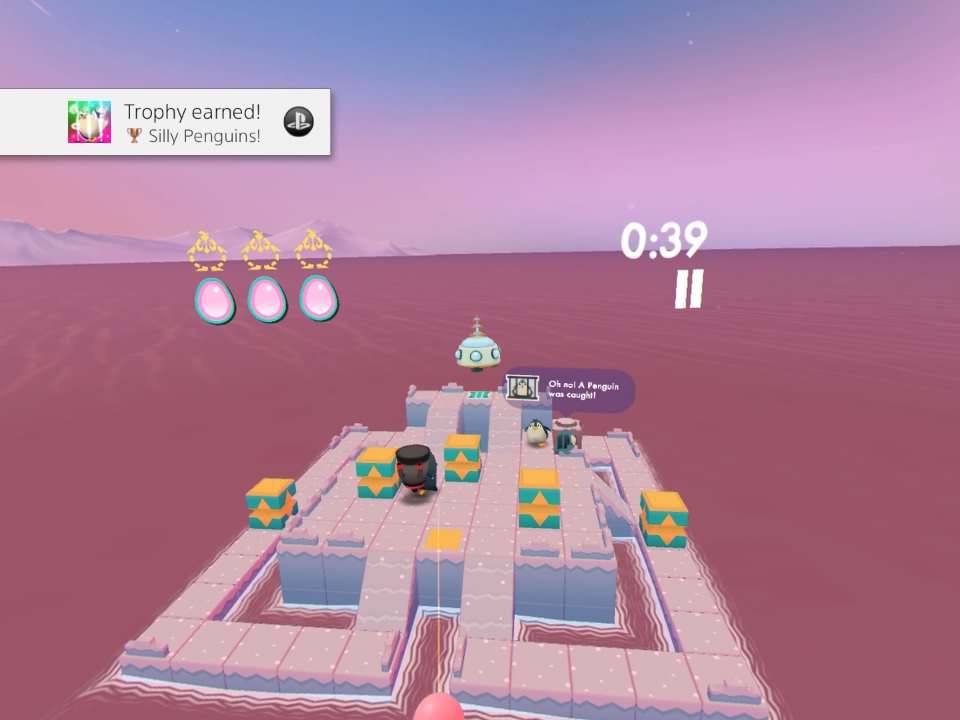 All in all, I enjoyed Waddle Home, it didn’t offer too much excitement but it was fun for a bit. Unfortunately, the game was really short and it’s possible to complete in under three hours. At just 40 levels there’s not much game content, so don’t expect much replayability. The VR in Waddle didn’t offer too much excitement, for the best part, I sat there and played as moving about seemed pointless. I believe the game was designed for the younger generation although impossible as VR restriction to ages twelve or above. The game will not appeal to many, but if you want to help save the penguins get Waddle home as it’s certainly something you don’t see every day. Waddle home waddled its way to a Thumb Culture Bronze Award.