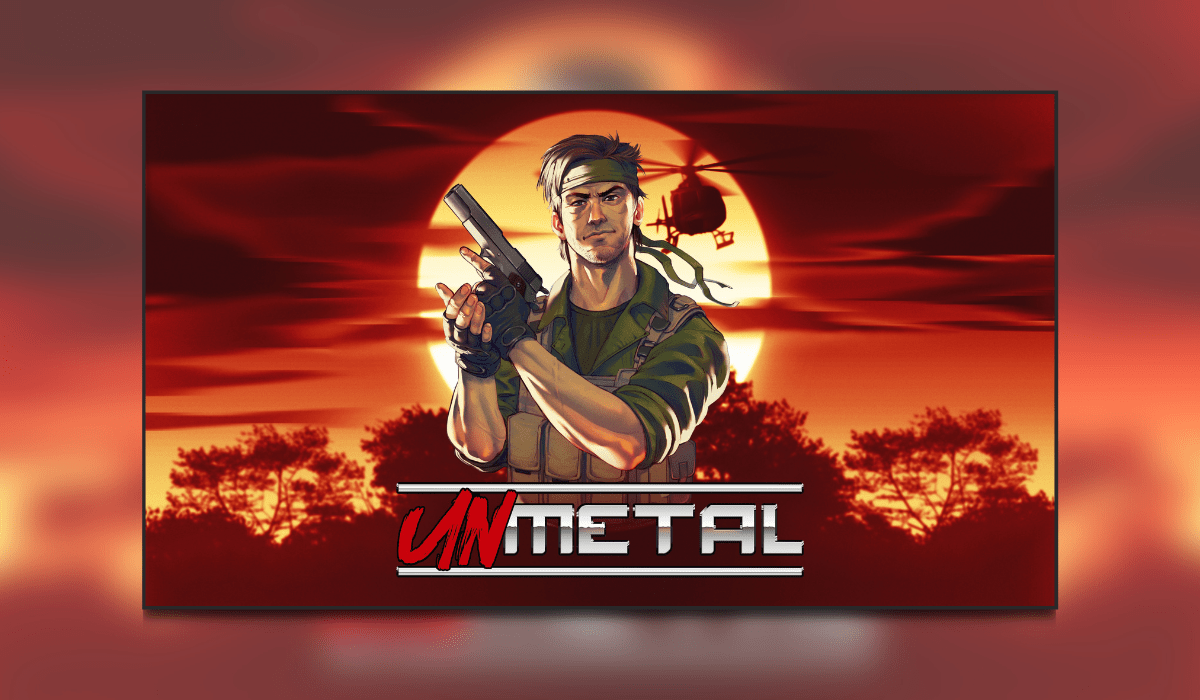 Welcome to my review of this hilarious game named UnMetal. @unepic_Fran (Unepic, Ghost 1.0) is the developer of Unmetal and the publishers are Versus Evil (Sockventure, Hand of Merlin, First Class Trouble). UnMetal is a 2d stealth action-adventure game that sees the player controlling Jesse Fox. Jesse has been wrongly accused of committing a crime he did not commit and must escape a covert military base.

UnMetal – Gear Solid Is Full Of Humour From Start To Finish

Can Jesse snake his way to freedom? Or will the enemy tangle Jesse in their grasp? Keep reading to find out! If you like this review, check out a previous review of mine here where I played Lost in Random on the PS5.

We start the game off by learning that we are playing as Jesse Fox. Jesse is an commando who was been wrongfully imprisoned for a crime he did not commit. We need to use his humour, wit, brains and taped together gadgets to escape the covert military base he is imprisoned in. Jesse breaks out of his cell using his quick wit to outsmart a guard. We must continue to use these smart tactics to escape from the military base. We can use objects such as coins to distract guards, so we can sneak up behind them and knock them into next week. Jesse can then pick the enemy up and hide them in a dark corner. This helps in not triggering the base alarm.

Whilst playing as Jesse, we must fight our way to freedom. Until we bodge some items together to make weapons, that is. We soon learn that we have a wizards sleeve for an inventory. It’s pretty never-ending. The inventory pays off though as we can combine items.  For example, when you’re down in the sewers you can repair a flamethrower with a plastic drum and some gasoline. Fortunately, you make this not long before fighting off some rats, and, the sewer garbage boss. I’ll leave that one for you to find out what the hell I am talking about.

The game has some absolute jaw aching headache humour moments. The dev literally doesn’t give a hoot with the humour in this game and it shows. Some of the parts actually did have me laughing out loud. One, in particular, is when you go into a toilet to save your game. Yes, that’s one way of being able to save the game. Anyway, there is a guard using the bog in a cubical and asks for toilet paper. If you have some in your inventory you can pass it through to him under the door. Then as you’re walking out he starts to moan that it’s unscented and only one ply.

You can turn around and then bash the door in and knock the guard out. This then transitions to a cut scene with someone asking Jesse why he did it. To which Jesse responds something like “I literally kicked the sh*t out of him, that toilet paper is not unscented anymore”.

Another humorous scene in the game is when being chased in the sewer by loads of rats. Jesse, for some reason, turns into a piece of cheese and we must escape the rats. This is whilst a Benny Hill-esque song is playing. Brilliant.

However, UnMetal isn’t all humour. There are some quite tough boss battles if you’re not sure what you’re doing. I was stuck on the first boss for around five attempts. That was until I worked out what I had to do, then I beat him pretty quickly. Of course, I am not going to spoil it for you, other than his name. Jesse Fox vs Grenade Guy. I love the transition screen that comes up when you enter a boss fight, as above. Also, the “Jesse Wins!” screen when you beat the boss. Just pure brilliance.

The enemies are quite tough in UnMetal. Just remember that all-important dodge button if you’re seen. If not seen, you need to act fast with your fists or one of the many weapons you will come across during the game. Such weapons are the bodged together slingshot, which is made from an eye patch and a stick, another is the aforementioned repaired flamethrower. We also find a pistol and more weapons along our journey to freedom.

What you see is what you get with the graphics. Whilst they look rather retro, the game handles and responds with triple-A quality. The game does not drop any frames whilst playing and it’s just smooth from start to finish. As mentioned the graphics look rather retro, but that’s not by any means a bad thing. It looks brilliant. I tried the game on a 27″ 1080p screen as well as a 27″ 1440p screen. Both looked real nice. The game didn’t hurt my eyes like some retro based games can do.

The audio in UnMetal is really good. The music is very upbeat and action-packed when in battles. The sound effects remind me of a game of a similar nature from a certain Japanese guy who also came up with Death Stranding. Alerts, knocks, fighting. It all pays homage to Metal Gear. Again, that’s not a bad thing at all. The voice acting is also very good in my opinion. Character voices are clearly recorded and have personality in them. Unlike some games where it sounds like a robot talking to you.

Due to the nature of the game and it contains secrets in the levels, it can last anywhere up to 15 hours for one playthrough. Of course, you can just replay the game should you wish to. What adds to this is the challenges. They give you different ways of doing things differently from how you may have done them the first time around.

UnMetal is a top tier game from a low tier developer. This is some fantastic work from @Unepic_Fran and I can not wait to play the next game from him. UnMetal earns the highly coveted Thumb Culture Platinum Award from me. Fantastic work dude!