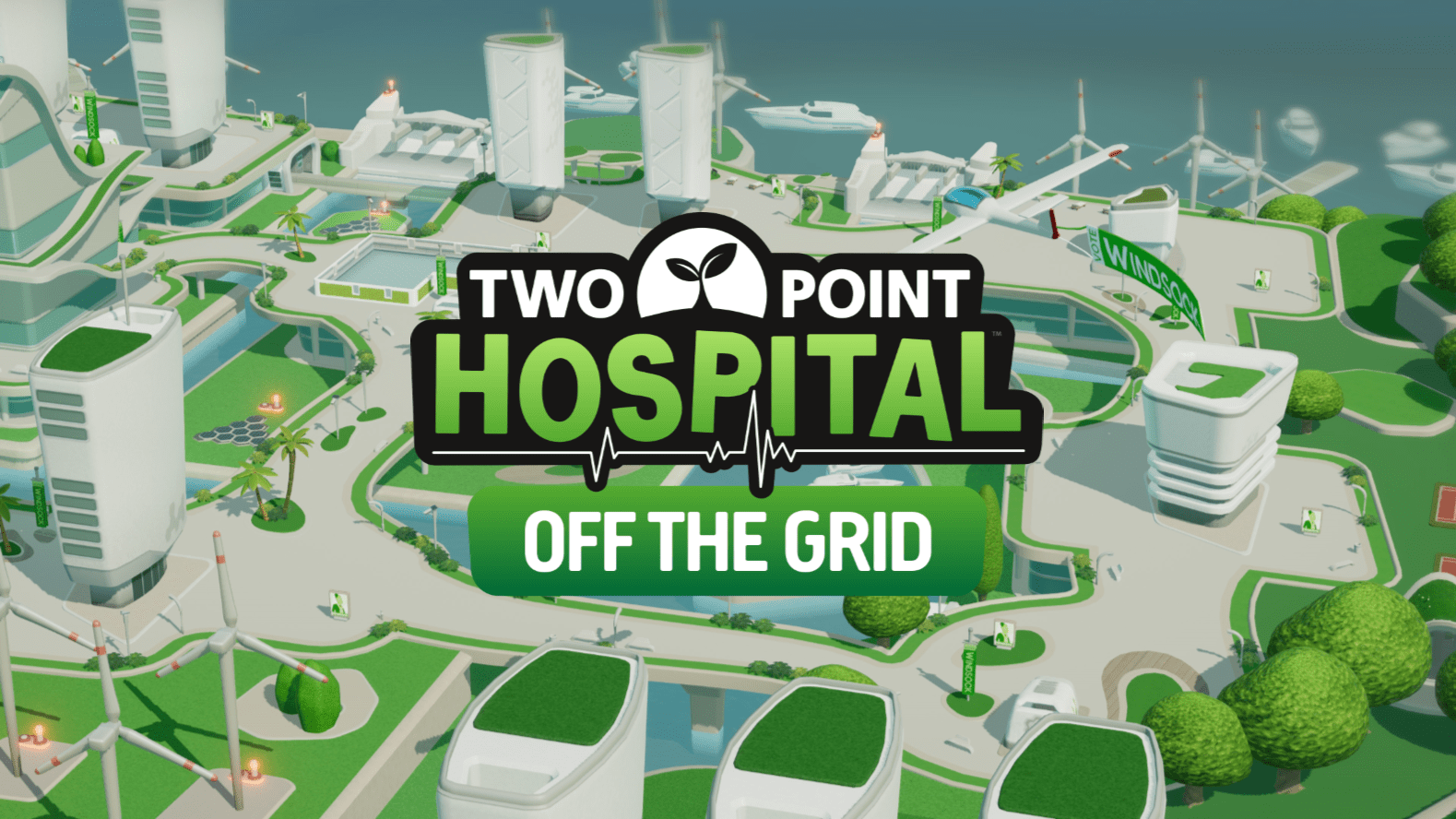 As a big fan of Two Point Hospital, reviewed by Rich on the PS4 back in March, there has been a constant progression of DLC dropped into the PC arena to expand your gameplay as well as challenge the way that you think.  The latest DLC to drop is the aptly named “Off The Grid” that sees you build and run your hospitals in a variety of eco-friendly environments along with a range of new ailments to treat.  So is the new DLC worth getting for £6.99 on Steam? Read on!

The back story to Off The Grid is that the Mayoress, Tabitha Windsock, is desperately trying to stay in office and is aware that the environment is what everybody is talking about.  She therefore founds the Department of Green Things and this is where you step in to expand your hospital into three new parts of Two Point County, each with their own gameplay mechanics that you need to quickly learn if you want to succeed.

The three new hospitals are:

A nature commune set in the countryside surrounded by campsites and woodland and the love of holistix.  There are no roads, only paths and building you hospital is a very strange affair as you are creating rooms within a boundary however there are no external walls to outline your hospital, the corridors are therefore exposed to the elements.

Scoring for your hospital is based on a “Wellness index” that, depending on how well you have fulfilled the criterias such as staff and patient happiness, hygiene, cure rate, etc., will affect how much funding you receive each month.  Unlike the base game, you do not get much money through curing people therefore you must keep a watchful eye on the statistics.

Slated as the original settlement for the county and shrouded in mystery as to what happened to it you find your hospital being built within a farm setting where herbal medicine and horticulture are the traditional cures.

The layout of this hospital is a series of barns, a little similar to the base game in terms of having physical buildings however the treatment rooms are items such as herb gardens that you will need to staff in order to cure patients.  You will find no vending machines within this hospital as they are banned and instead you will need to provide fresh veg and rainwater.  Scoring is achieved through your gardening powers and by feeding patients, placing eco-friendly snacks and drinks around your hospital and curing patients using alternative medicine.

The county’s first eco-city, the layout, like Old Newpoint sees you building rooms within purpose-built buildings albeit modern.

The aim here is to build green energy machines such as wind turbines, hydro dams and solar panels to keep the rooms in your hospital powered.  It doesn’t stop there though as it also influences the amount of transport in and out of the city.  You must therefore carefully allocate how the power you generate is used, for example, you could set it to the Patient flow system which will increase the rate that patients arrive at your hospital or even towards the Staff applicants system which will then make more potential members available for hire.  Ofcourse you are doing all of this while trying to run a hospital!

There are 35 new illnesses that you will come across in Off The Grid, each with their own fairly hilarious descriptions and treatments.  I particularly enjoyed “Distrawed” whereby the patient treatment involves a bizarre hay baling machine, hopefully getting the patient out of the other end in one piece.

As per the Two Point Hospital game, the graphics are still in their distinctive cartoon form.  The variations in the three environments are enough to give you a good sense that you are playing something new therefore Off The Grid does feel fairly unique.  The new diseases and treatment rooms are beautifully animated and are well worth watching close up to see what is actually happening during the cure process, for example in the herb garden, patients will be placed inside a giant plant where they meditate.

With the new DLC there is new radio station music and chat as well as banter from the receptionists to keep the game feeling fresh.  There were several moments that made me grin, the treatment machine sound effects are fantastic as ever.

It will take around 3-4 hours to achieve a three star rating for each hospital however that is really grinding at it.  I prefer to play games like this fairly casually, a little bit each evening, therefore it took me slightly longer.  Once you have completed the campaign mode, you can play again through the sandbox mode where you can set your own goals and challenges to really test your self.

If you love Two Point Hospital then this is really a no brainer, Off The Grid gives you three additional levels for the campaign with new illnesses and although the basic hospital gameplay is still there, the additional gameplay elements of holistix, herbal medicine and eco-energy buildings really adds a bit more into what you need to do, making it slightly harder than what you may have been used to in the past, but equally rewarding.

Off The Grid is a worthy addition to your game, therefore I give it the Thumb Culture Gold Award.