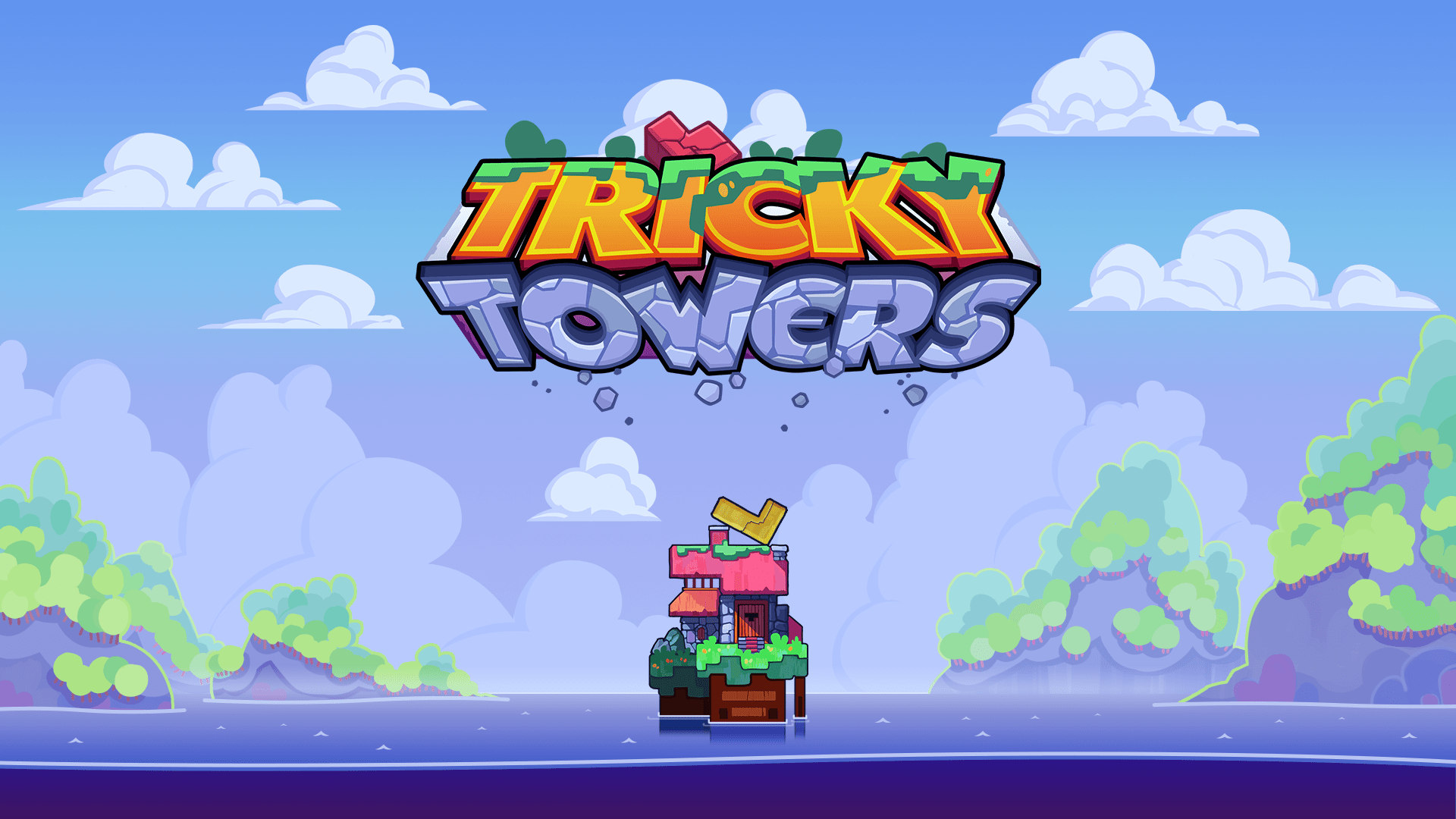 Tricky Towers is basically a more modern version of Tetris, but with a magical and physics based twist. It also aims to get players together both locally, and Online to build their clumsy tower of bricks in various game modes. It’s recently launched on the Xbox One.

The original game, developed by Weird Beard Games, launched on Steam and PS4 back in 2016. It went on to port to the Xbox One in September 2017 thanks to BlitWorks, with an exclusive game mode which I’ll touch on shortly. Whilst the title bears incredible similarities to Tetris, even down to every one of the standard blocks, the gameplay itself is different. Rather than clearing rows as you do in the 1984 classic, Tricky Towers finds you trying to stack the blocks as neatly as you can in order to form a tower, and depending on the game mode, it’s for various purposes, so let’s talk about those. 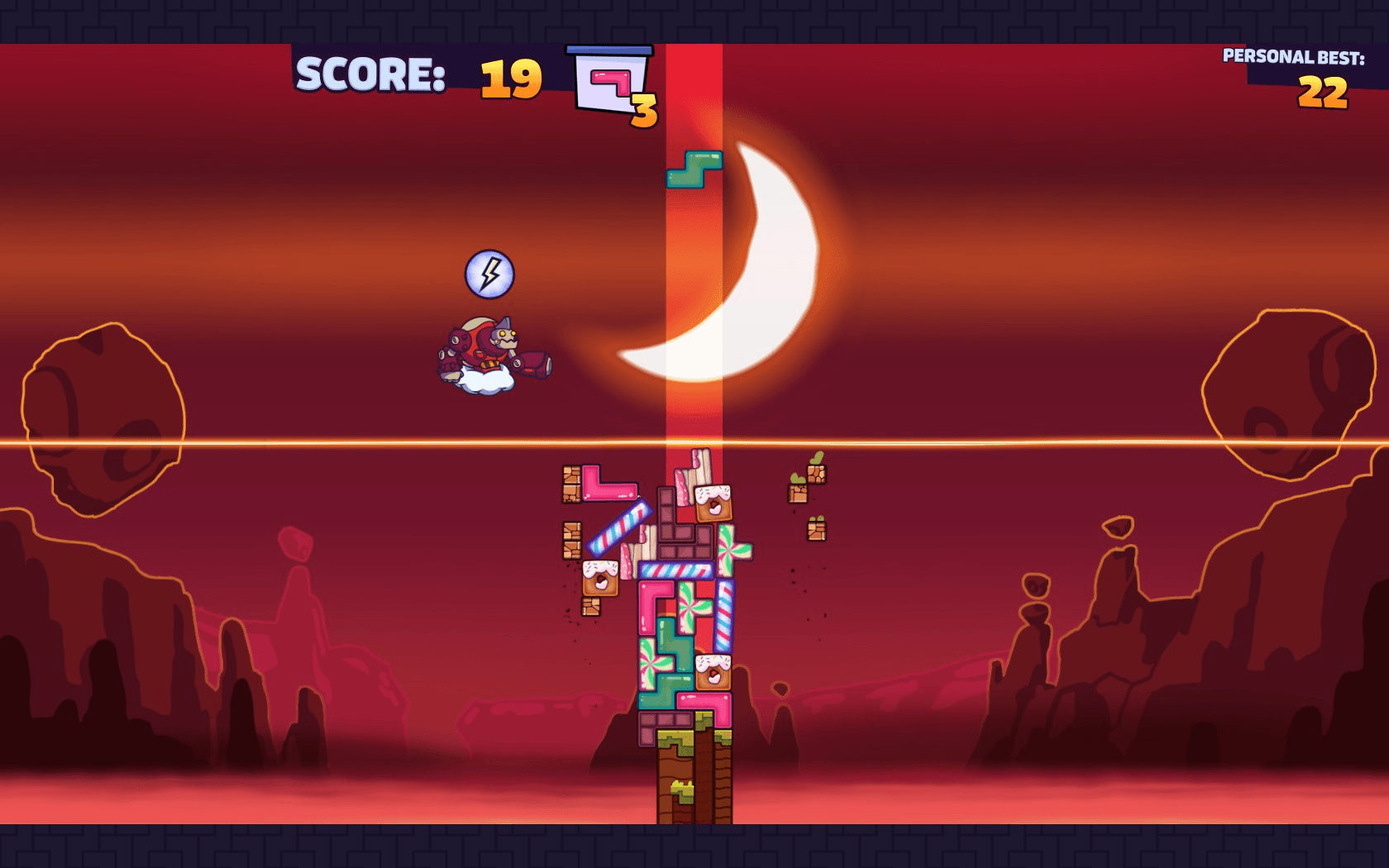 The original Tricky Towers has three game modes available, Race, Survival, and Puzzle, these modes are also in the Xbox One version. Race mode sees players trying to build their own towers in order to reach the finish line. Survival hands you three life points and has you trying to build as high as you can without dropping your bricks. Puzzle is, as expected, puzzling, and finds you trying to place bricks in a certain way, using up all of your brick collection you’re given at the start, without going over the line. The Xbox One exclusive game mode sees players trying to build their tower as quickly as possibly to beat the rising water below them.

Now, I’m going to be honest here, I have been trying for about a week now to find an Online match with someone on Tricky Towers, but I’m not having any luck with connecting with players, which kind of leads me to thinking that perhaps the marketing wasn’t a strong point in the games launch, players are either just playing it locally, or sticking to Single player. I did manage to find players on a weekend though, and managed to try the standard Online games, and the tournament mode. The main issue I found was actually to do with hosts dropping out. I experienced no lag, but plenty of people halfway through a match dropping out. Irritating. If you do end up with the same problem as me and struggle to find Online players, singleplayer does have leaderboards which means that you can still try and be better than someone else in that way.

Playing against friends will see you all competing in a fun colourful environment. There’s also a tournament mode in which you can take part in a series of cups that have different levels to clear, eventually finishing the final level and being crowned the winner. It’s not all about building blocks though, because the game has magical spells that can be cast by each player, and those spells are either light or dark spells. Light spells will aid the player in their construction, while dark magic will help slow down the opposition in various ways. 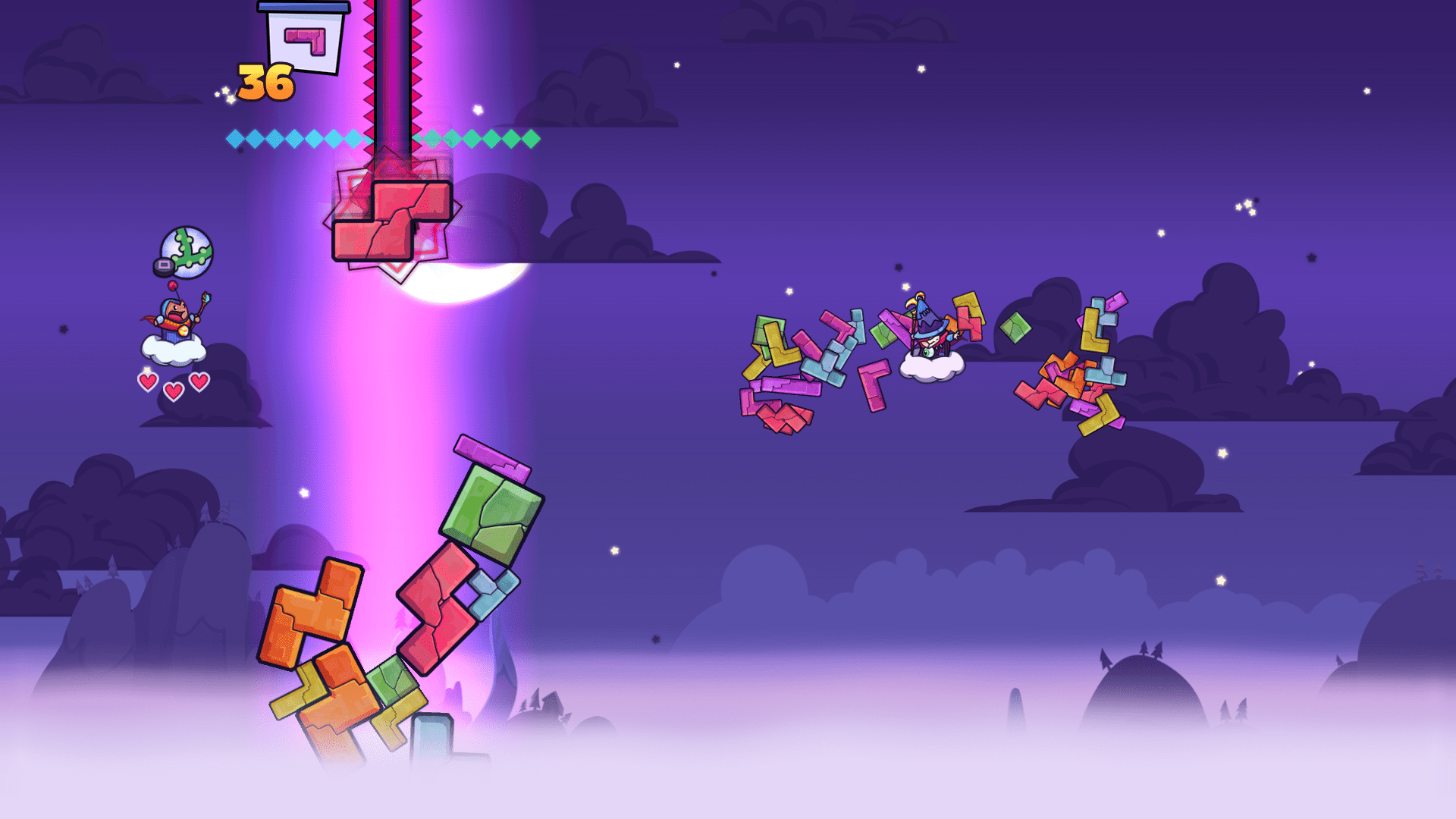 The cool thing about Tricky Towers being a physics puzzler is that it can have players “nudge” the block that’s currently falling,which can either be used to fill in a gap below the top of the tower, giving more stability, or it can be used to nudge other messy blocks off the tower hopefully clearing a flat surface for you to start again…or messing up and knocking your tower over.

The actual physics of Tricky Towers are fantastic, while they don’t appear overly real, they still pose a challenge in which you need to strategically place blocks on certain sides to keep the tower from wobbling. A fuller base will be more steady, but over time, the higher you go, the thinner it usually ends up becoming. The nudge block system can work in your favour to fill up a hole, but miss it and you could end up knocking the whole tower down, which is rather bloody annoying. Sometimes magic spells, especially in Survival when dark spells are at random, will transform your blocks, either locking them in a certain way, making them huge, or turning them into giant objects. These come with their own weight properties, so you can expect to be trying to pile a load of weight onto the left hand side to counter balance for example.

Let’s talk about the graphics. Very bright, vibrant, and the foreground that you play upon stands out nicely from the background that usually features an animated sky scape that looks both mystical and complicated while also not being too distracting. The characters are cute, and I saw a special character appear in an Online match, which leads me to believe that you can either unlock or purchase them. Your blocks come as standard with a few skins, but you can purchase more from the store using real world money, and the magical effects, while obvious that it’s magic, sometimes you don’t get to notice if it’s light or dark magic being cast due to it not being a main focus when you’re trying to focus on the blocks 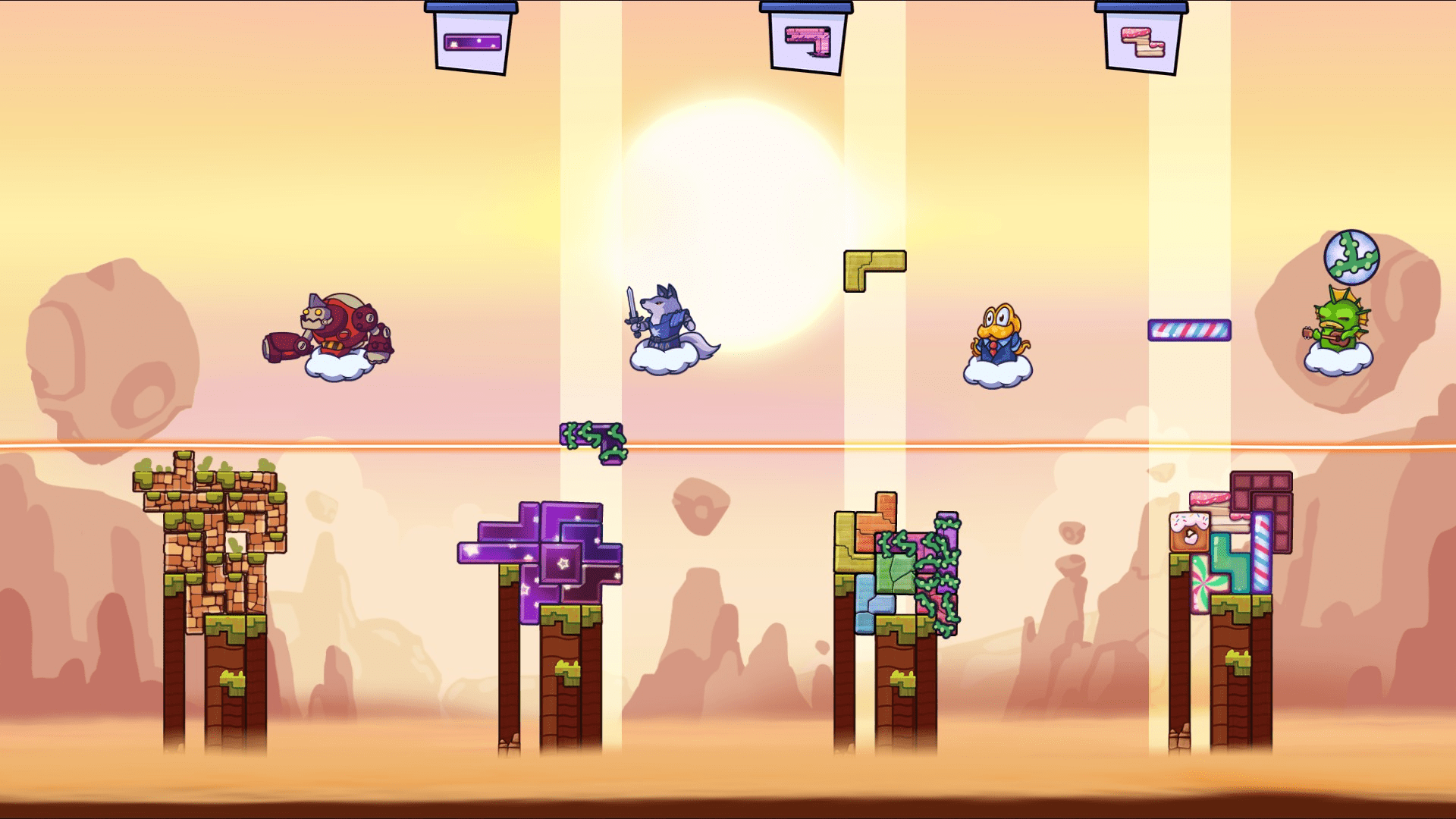 The audio is wonderfully comical and quirky, and the sounds of the magic spells being cast is quite loud and powerful, although I’d have expected a light flickering, but instead it’s basically an intense whoosh. The sounds of the blocks is also enjoyable and doesn’t become annoying as time goes on, so really, top marks for the audio work!

It’s a fairly good title, I’m happy that the singleplayer is just as enjoyable as the multiplayer, but there does seem to be a lack of players which makes makes finding games hard. Something some more marketing could possibly fix up. And while single player is a great alternative I find myself playing and wanting to be in an Online match. Instead I just try and get up the leaderboard. So really you can have hours of fun with this, and even my eldest daughter loves playing it with me…or getting frustrated and shouting, “Urgh! Dad! How could you be so stupid!?” 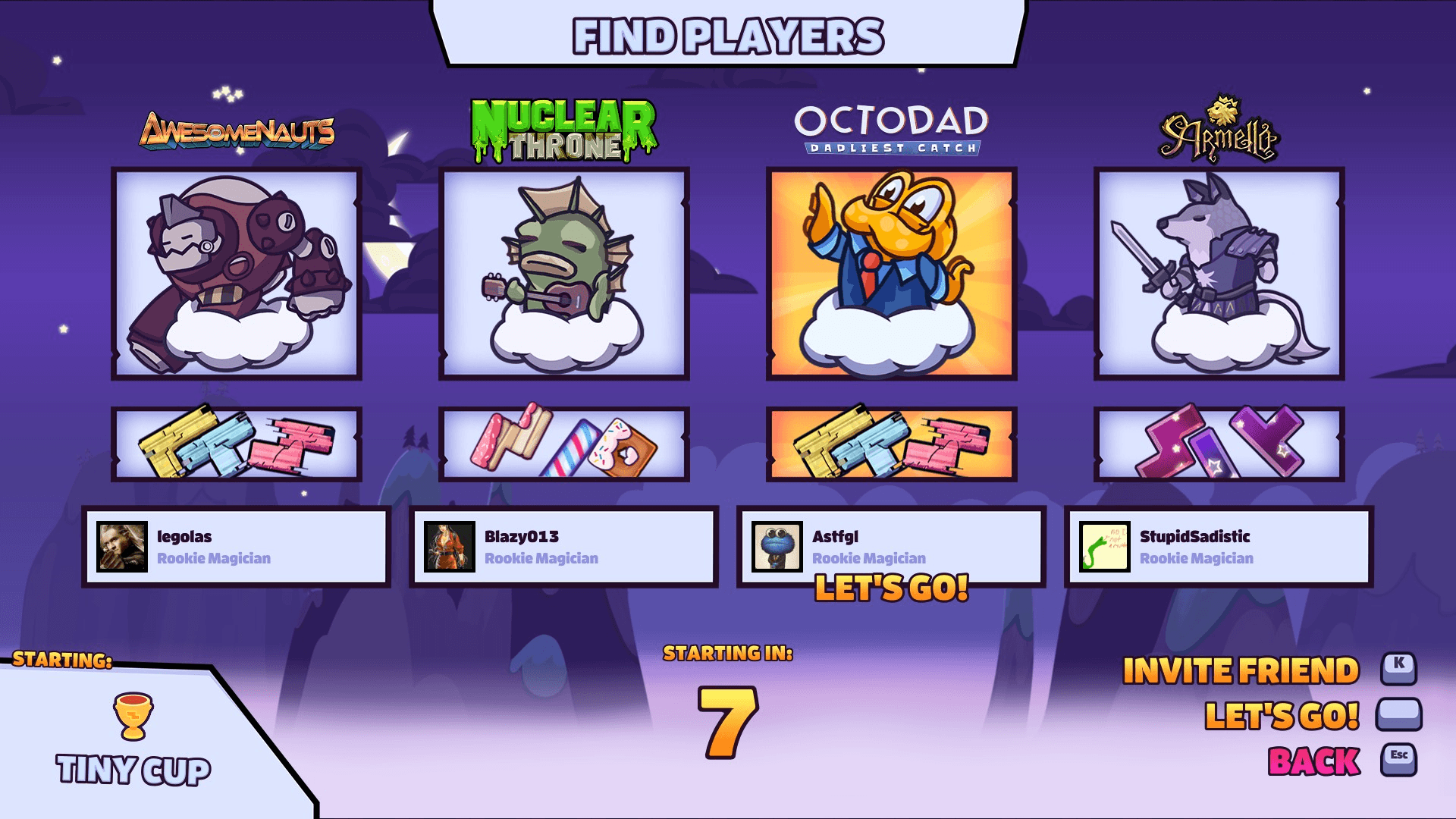 I’d say that you’d love this title if you enjoy Tetris, and classic games with a modern twist, and it’s nice to take a break from the realistic titles such as Battlefield or Project CARS, however the lack of players does make your time with the game feel rather lonely, and single-player can feel rather repetitive over time.

All in all, I’ll give Tricky Towers a Thumb Culture Silver Award