Max: The Curse of Brotherhood is a cinematic adventure filled with action-packed platforming and creative puzzle-solving. Armed with only a Magic Marker, Max must confront evil at every turn in a hostile and fantastical world in order to save his kid brother, Felix. Dive in and let me tell you a bit about it…

The game opens as Max arrives home to find his younger brother, Felix, playing with his beloved toys. Enraged, Max searches the internet for advice on how to rid himself of his troublesome brother and happens upon a spell, via the Internet of all places, to spirit Felix away, which he recites. ( A fair and just punishment in my opinion, I mean who wants your snotty gross little brother touching your things? Eww) A portal opens in the bedroom and the younger boy is snatched away by some nether-fiend. Realising the appalling “mistake” he’s made and driven by a primal horror to rescue an imperiled loved one, Max dives after his brother and begins the winding and creative rescue operation.

With his sibling sucked into a magical dimension fraught with danger, it falls to Max to rescue Felix and spare himself the grounding that surely results from banishing your brother into a nightmarish kiddie version of “The upside down”.  Max’s primary method for traversing and shaping this new world is his marker, which is imbued with the power to create columns of dirt, vines or even jets of water. Each power can only be used at a specific location; usually there’s a specific way Curse of Brotherhood wants you to use the powers in concert to progress.

I usually grab platform games with both hands but, this one felt rather clunky at times unfortunately. For instance, while I was running away from the dreaded Monster, I found myself dying a number of times due to the fact I couldn’t crouch under a cliff fast enough. I found that it stretches the controls beyond their comfort zone and the limit of freedom to draw whatever and wherever I wanted. For whatever reason the controls were not precise enough for some of the puzzles so you’d find yourself spending longer than really required. On the Switch however, the movement was slightly better thankfully. The controls felt a lot more freeing and easier to get from one place to another, especially when jumping.

At first the puzzles seem simple, since you can only use certain powers in specific ways, like raising an earth pillar to get up a cliff or making a vine to swing to a new platform. Even these early puzzles were a bit exhausting though, as my pillars weren’t always tall enough for shrimpy Max to reach the next area. But I couldn’t just extend a pillar – instead I’d have to destroy it and build an entirely new one, which was a bit cumbersome, especially in the heat of a chase. Creating pillars on the Switch, again, was better, but still had that awkward and out of place feel to it. It definitely wasn’t as clunky using the magic marker, but still I found it non-user friendly at times.When wielding the magic marker, players have the choice between conventional controls or utilizing the Switch touchscreen.

At the start of the game, I would usually use touch controls to draw vines and branches, but found that my inputs didn’t always register exactly as I wanted. The conventional controls, which have you hold the ZR button to enter the magic marker mode did work better. It’s nice have the touchscreen as an option in undocked play, but drawing with the analog stick felt more natural.  Kutos to FlashBulb games though for recognizing this for the Switch release.

While the character designs of Max and Felix look great, everything else looks pretty dated for a game that came out three years ago, particularly the game’s opening segment in which you’re running through a desert wasteland with some pretty low-quality textures. That doesn’t mean that Max: The Curse of Brotherhood isn’t good-looking at times, of course – one section of the game, taking place in near-complete darkness except for the glow of your marker, is not only visually great but excellent in terms of game play, too, forcing you to be even more cautious as you check for monsters and traps. The CGI cartoon-style visuals come to life with funny exaggerated animations and the art direction for the backgrounds never fails to feel well-imagined.

However on the switch, the game can run a bit rough at times, which is a killer in sections that require precise platforming. The frame rate drops significantly and continuously throughout. Whether you are walking, running from enemies, or watching a cutscene, you will be greeted with some stutters. It is more significant when the screen is zoomed out to a wider shot or if there are multiple moving creatures on screen, but even when it is just a close up of Max walking it will slow down quite a lot.

The music especially is uplifting where you may find yourself partaking in some Jazz hands but this probably isn’t recommended since you need both hands to play! It has all the sounds you come to expect in a platformer, from the usual jumping “Ugh” noise to the “Oh no!” whimper while swinging across one of the many vines you come to draw. The voice acting is pretty good also and well-spoken with some humour thrown in. There was nothing for me at least, that stuck out as special in regards to music or any type of sounds but, for the younger ones there was enough to keep those ears satisfied (That is until their parents are screaming to “Get off that computer, your eyes will turn square!”) On the switch, the audio was exactly the same so there was no differences here for the release. 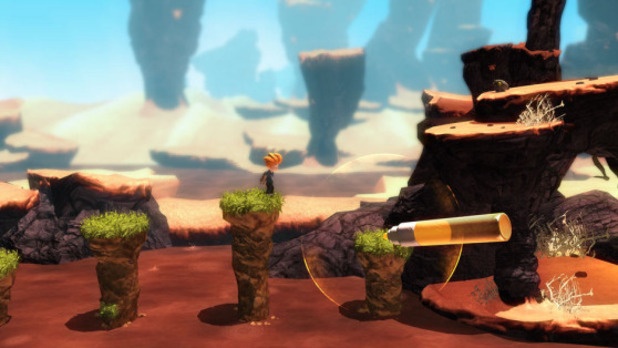 From the opening sequence, Max the cursed brotherhood started like a Pixar movie, which got me very excited to play it. Max The Curse of the brotherhood has an appealing story and protagonist, but regarding the puzzles I found them initially intriguing but they tend to get repetitive and therefore predictable over the course of the game. The controls were badly thought out and far too slow, restrictive and damn well annoying for my big adult hands, so I can imagine what it would be like for the younger hands. As previously said, on the Switch the controls were better, but again in my opinion, not enough for a seamless and smooth gameplay. Although, in saying that I did enjoy many aspects of this game, I probably wouldn’t recommend it due to the mechanics and frame rate on the switch which is a pity as it really could be a lot more than it is, unfortunately its potential was never achieved.

Max: The Curse of the Brotherhood had a lot of potential, but not enough to receive any more than a Thumb Culture Bronze Award, which coincidentally enough was the colour of my thumb after playing it!