Train Sim World: Founders Edition – Will It Leave You Chuffed Or Steaming? 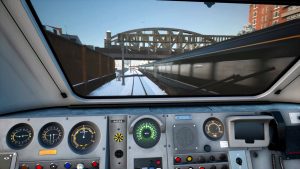 The game starts with you having just been employed by Great Western Railways as a driver on the London Paddington to Reading line. You get to choose your avatar and the game then takes you through a tutorial on each of the three featured trains. The controls are more complicated than you would imagine and it is surprising how many buttons and levers you need to push and pull just to get the trains started.  There are three trains to choose from in the game and the tutorials take you through the basic controls of each. The trains are the Class 43 High Speed Train, the Class 166 Turbo Express and the Class 66 Freight locomotive. The first two are passenger trains and the third is a freight. The passenger services are fairly straight forward and simply involve you stopping at each station (trickier than it sounds) and unloading and loading the passengers.

The freight is a bit more involved and the train has more controls just to get it moving. With the visual prompts it is fairly straight forward however there is a lot to remember. When you enter the main game modes you do miss the hand holding of the tutorials and it can be quite tricky to remember the right sequence of buttons and levers to get the trains moving.  However with practice you will eventually master it. There are two options for the controls, the various levers and buttons are mapped to the control pad or you can click the right button which brings up a useful movable cursor. It’s very much personal preference as to which control method is best and a lot will depend on which camera angle you prefer. 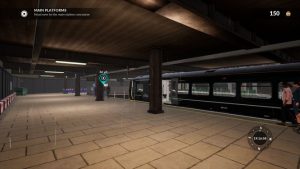 After you have completed the tutorials there are essentially two game modes, Scenario and Service. In scenario mode there are 5 scenarios in total and each will take you a good 45 minutes to complete. These include basic passenger services, dealing with a Christmas closure, freight hauling and rescuing a broken down train. Once completed there is not really any replay value in them and it is unlikely that you will find yourself revisiting them. I did try to sabotage one of the passenger service scenarios to make things more interesting but the game was having none of it! The start of the scenario saw you having to catch a train to Paddington as a passenger before picking up another service to Reading.

I was allowed to walk down the end of the train and enter the cab at the back but was not permitted to try to drive the train in the opposite direction! Equally, despite the fact I could get in the front cab with the driver my resetting of levers, brakes and throttles had no effect at all. A bit of shame. You are also denied the chance to see what happens if you jump a red signal as the game simply tells you the service has failed and you are taken back to the start of each scenario. The game was obviously telling me to treat it as a simulation and not as Grand Theft Auto : Great Western Trains edition!

Service mode sets you loose in the game world. You pick a train class and then a  service from the rolling 24 hour timetable and off you go. You are free to drive the whole route or hop off  the train and become a passenger on a different service. With the game awarding you points for how well you drive this is a bit like a career mode. You can also wander up and down the line looking for the collectibles or taking pictures in camera mode. With the ability to adjust the seasons and the weather there is some customisation available and the mode will appeal to the true train enthusiast. Whilst you can pick services that have come from all corners of the country you are restricted to travelling up and down between Reading and Paddington which is a bit of a shame. Whilst the ability to free roam around the stations and tracks sound fun it is rather spoilt by the fact that the stations are rather lifeless and empty. Failure to obey a red signal in this mode will also bring the game to an abrupt halt. If unlike me you obey the rules and try out the different trains over the 24 hour period there is plenty to do and with the godlike ability to control the weather there is enough variety to keep you interested. 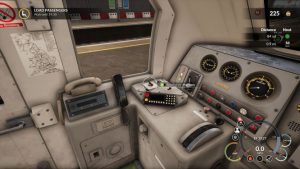 It is here that the game is unfortunately a bit of a  let down. The game suffers from numerous graphical glitches, poor frame rate and the draw distance is terrible. The faster you go the worse it is as the game simply struggles to keep up. This is a shame as simulators are greatly enhanced by their graphics. The scenery is a bit lifeless and the stations lack that living breathing feel that is the hallmark of many open world games. The departure boards are blank and the escalators are strangely static. In one scenario I arrived at Paddington Station to be greeted to what appeared to be a flashmob participating in the mannequin challenge. This was made all the more bizarre by my fellow passengers who exited the train and weaved their way around the lifeless commuters on the station concourse. Highly amusing but it did detract from the realism of the game.

The stations and platforms are in some cases quite bare which is a great shame given the effort that has been put into the interior of each train. Hopefully a few patches and some DLC can fix this. Essentially however the game is a train simulator and the cab of each train is beautifully rendered with excellent details. The trains themselves both exterior and interior are very realistic which every button, lever and switch faithfully recreated, the driver’s seat headrest even has that slightly alarming brown greasy patch from the drivers sweaty hair! The level of detail is extraordinary with you even being able to set the climate control on the train, a little bit pointless but it does add to the realism. It is therefore a shame that the outside scenery is not as detailed and suffers from a few bugs. Let’s hope that Dovetail can fix the issue with future game patches. 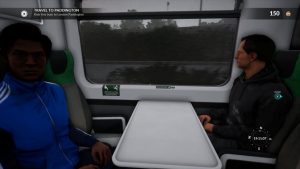 A lot of work has obviously gone into making the sounds of the trains as realistic as possible. The sound of the train chugging along the track is strangely soothing and the train horn is spot on! The volume can be a bit hit and miss and a couple of times I found myself adjusting the TV volume up and down on occasions. One thing it is lacking is people sounds with the passengers being strangely silent. I’m not suggesting that the devs need to recreate that annoying person who has loud mobile phone conversation in the carriage but it would be good if there was at least the suggestion that the NPC’s can talk!

With a 24 hour realistic rolling timetable, around 35 odd miles of track and 24 stations to explore there is initially plenty to get your teeth into. Whilst the 5 scenarios take about 40 minutes each, once they are done it is unlikely that you will be revisiting them too often. Once the collectibles have been snaffled in passenger mode there is not much more to do other than sit zombie like looking at the scenery and taking pictures. The longevity of the game ultimately will depend on the DLC released in the future. The PC version has multiple lines, trains and scenarios to play with and if these are ported across to the console version there will be more than enough to satisfy even the most ardent train buff. It’s very much going to be a case of watch this space. 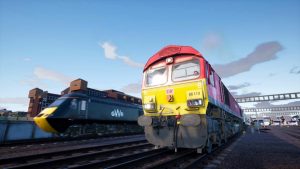 Whilst I had fun with the game it soon became a little bit boring. It’s definitely one for the purists and the true train fanatics out there. With the addition of further DLC I do believe that the game will have wider appeal. If you are a train buff you will love it however for the casual gamer and non-train fanatic it may not hold your attention for long. It’s a bit of a Marmite game which is sadly let down by its graphics. For that reason and purely due to personal preference (i.e. I’m not massively train mad), Train Sim World: Founders Edition gets a Thumb Culture Bronze Award

Like me, do you remember when popular trading card games came out? Or even ...

It seems very apt in these strange times to be reviewing a game about ...