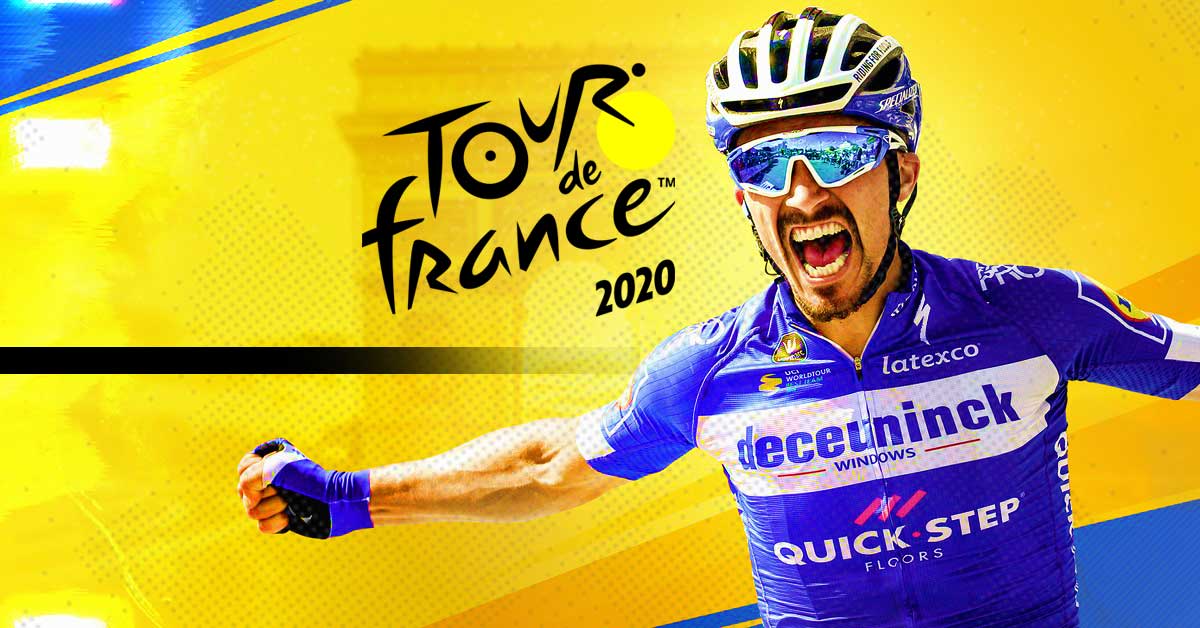 Jason welcomes cycling enthusiast Si Woodhams to take on the Tour de France 2020!  Over to Si!

So usually about this time, cyclists across the world are getting ready for the greatest stage race on the Calendar of the Tour de France.  However, due to the current situation that we are all too aware of, things have changed.  The game of Tour de France 2020 is currently all we have on offer and it is the latest release from devs Cyanide S.A. and published by Nacom.  I had the fun of reviewing the 2019 edition and I must say it failed to impress on so many levels, let’s dive into the 2020 version to see if it can readdress my thoughts.

Tour de France 2020 is a cycling sim and as you can imagine features you, on a bike, racing across the Tour de France route against a host of competitors.  This year has a few new features including; Liege-Bastogne-Liege which is traditionally a one-day stage race set along 266km of steep climbs in Belgium, a new first-person POV camera giving a perspective of what it is like to be in the saddle and finally a tweak to the controls, but other than that there is nothing else really to write home about.

The control of the bikes has improved, and in the 2020 edition you can finally crash, although no matter how hard you do crash you will find that you simply jump back onto the bike as if nothing had ever happened…

In Tour de France 2020 you see once more the biggest teams and names in cycling (Team Ineos: Froome, Thomas, Bernal) are not included instead you have Team Inone (Frime, Thomet and Bernacle) it’s all very old school Pro Evo again. You can edit these yourselves, but it really should come as standard with all the teams ready to go.

In the 2019 edition, I complained about riders and the bikes looking exactly the same and sadly the 2020 edition has not addressed these issues, the bikes are all identical once more apart from the colour and the riders, just take a look at the image below.

The game modes from the 2019 edition are present once more with the ability to obviously take part in the traditional race which allows you to unlock other tournaments and stages.  There is the Challenge mode whereby you compete against the community or play split-screen to set the best time on a number of downhill and sprint stages.  Pro Team allows you to once more manage a team to the top of the world ranking and finally there is Pro Leader whereby you manage a rider to become the best of the best and take that yellow jersey.

Good news on this front people!  If you have read my 2019 edition review, you may remember it experienced horrendous frame rate drops and freezing graphics.  So far Tour de France 2020 has been a massive leap forward in aesthetics.  The graphics have vastly improved but are still some way behind the pacesetting sporting sim giants such as EA Sports, but still it is a vast improvement on seeing the same houses and trees every 10km or so!

So far, Tour de France 2020 has had none of 2019 issues such as audio stutters and total drops sound.  This thankfully has been addressed.  Gone is the constant “Allez, Allez” of the crowd, instead replaced with a more atmospheric crowd soundtrack, although again throughout the long stages this can become repetitive.

There are 21 official stages for you to race through, and this will take you a while to pedal your socks off to.  The various modes of play will keep you entertained for a while and I particularly enjoyed the split-screen challenges, however, for me, it still has something missing to keep me rooted to the controller and screen.

With the current world situation, cycling really has become the chosen mode of transport for some.  You may or may not be surprised to know that most outlets have sold out of bikes and equipment.  Turbo trainers have seen a massive 800% increase in the sale of turbo trainers! With the lockdown forcing the pros indoors and online as well, you may as well jump on your turbo trainer and ride with the real deal, only this morning I was following the real Chris Froome up a mountain.

If you are into your racing sims then give Tour de France 2020 a try, however, for me, I feel I crave the real adrenalin buzz of cycling too much.  Sadly 2020 again receives the Thumb Culture Bronze award.