Tiny Troopers Joint Ops XL by Epiphany Games is an epic bite-sized arcade shooter, filled to the brim with action-packed mini maps of mayhem! Take control of your tiny troopers as you battle evil adversaries from around the world with a multitude of weapons. Recruit specialist mercenaries such as Medics, Machine Gunners,and the Elite Delta Force to subdue enemy insurgents! Collect medals, dog tags, Intel and more during the course of each mission to ensure victory! Wait for it…It also has Zombies! Does the hype live up to the actual gameplay? Let’s Deploy, Stat! 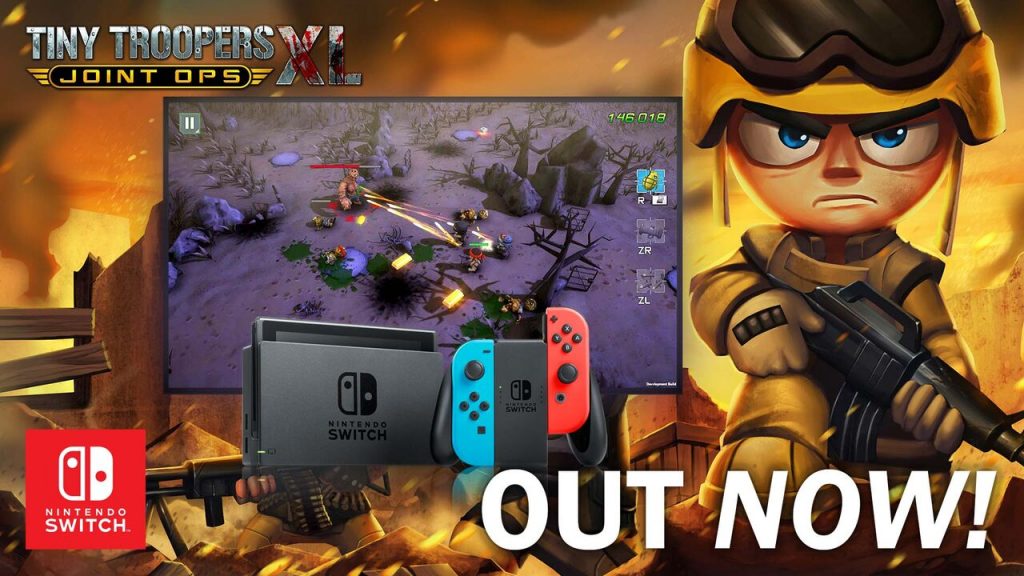 I’ve recently got my hands on my very own switch and I have to say, I’m in love. I couldn’t wait to get stuck into some games I never had the chance to play before so, I was pretty excited about playing Tiny Troopers XL. If I’m honest, even though I was excited to play a new game, I was apprehensive as I wasnt sure if I would enjoy it. Tiny Troopers is essentially a squad-based game where you’ll take your troopers through a variety of missions into enemy territory. Most of them, of course, involve blowing things up…very satisfying! Thankfully there’s some variety thrown in though with an occasional escort or survival mission as well as a few that have you working as the gunner in a moving armoured vehicle for a little extra flavour.

Between missions you’ll have an option to upgrade the attributes of your squad members (highly recommended), buy some alternative gear, or essentially recruit mercenaries of various kinds to assist you in missions that may be a little out of your league at the moment. You control 1-3 soldiers in your troop unanimously along with the occasional Spec Ops mercenary unit who can join your team for one mission. You can move, command and access options either with the buttons or using the Switch’s touch screen though I very rarely used the touchscreen at all as it is much easier to play with the standard controls of the Switch. 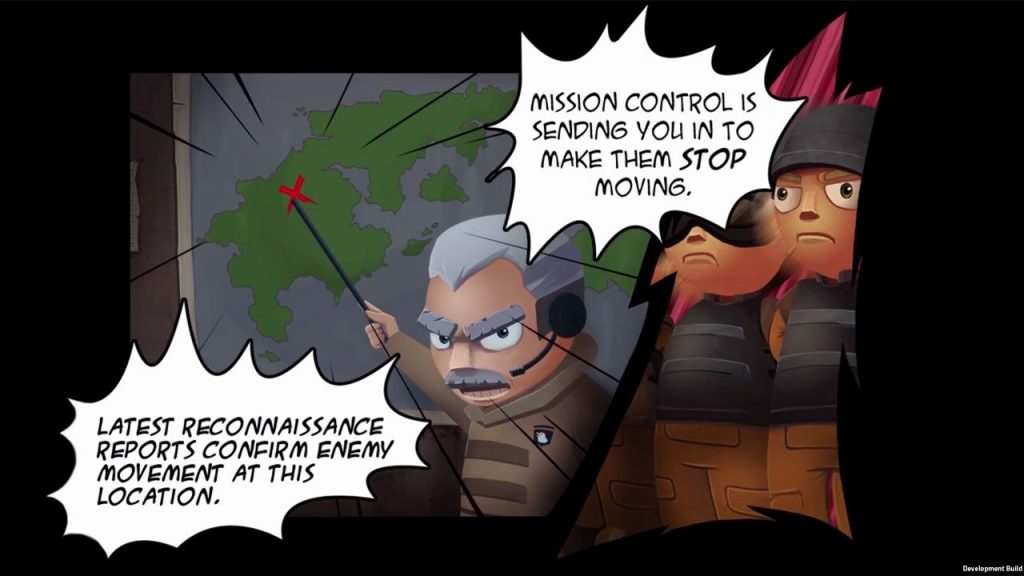 I’ve no idea where in the world I’m pointing but it looks good!

Tiny Troopers really isn’t meant to portray a simulated military atmosphere but rather take players into a world that shares some similarities, but overall provides a comical experience. There’s a lot to experience within Tiny Troopers as it provides you with 60 missions to complete while also adding in 8 extra zombie campaigns, 4 fast paced undead wave maps along with a zombie survival mode. Talking about Zombie survival, this is where I had the most fun. You start off on your own with team mates behind gates that you can’t reach until you have cleared all the raging zombies in your area, only then can you race over to them and free them so you tackle the hordes together. You keep going as a group until you die, I found this a lot of fun being a big zombie fan. 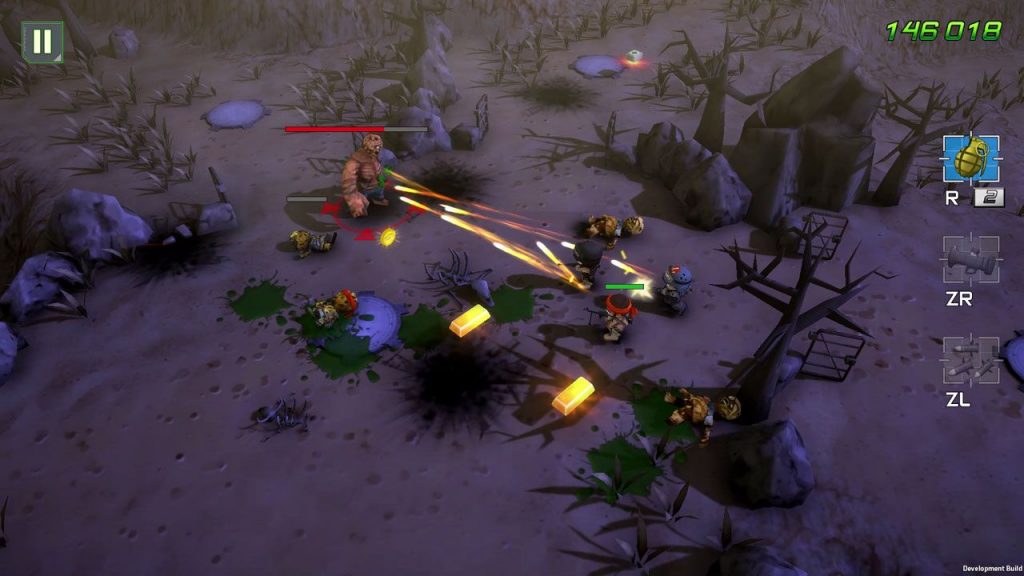 Tiny Troopers provides you with a tutorial before jumping into the action and so, before being thrown into the shark’s pit, you’ll have an idea of just how to manoeuvre yourself around and not get killed…too much. As you stroll around the map, you will come across medals and these shiny wee things are pretty important due to the fact it takes 3 of these to revive your team mate…or you can let the idiot die and have yourself a big enough ego to take the enemy on yourself, your choice!

The graphics have stayed untouched since its time on mobile devices, still offering low-res mobile phone textures and still, unfortunately, suffering from a little stuttering frame rates at times. For the most part the environments are simple and clean with only some aliasing on the finer lines of soldiers clothing, but it still very much looks like a mobile game and to be honest, that’s ok with me as there is fun to be had throughout. Graphics aren’t everything people!

The sounds of bullets zipping through the air, dynamite and grenades exploding and airstrikes whistling overhead as they descend upon you do give the game some realism, even though it is supposed to be a “kid friendly” game with South Park styled avatars instead of realistic properly proportioned human beings. The cut scenes which feature voice acting is very crisp but sounds somewhat hammy at times. The delivery is fine but for a game about war, it does take itself a bit too lightly audio wise. That’s not too much the actors’ fault but the script itself probably won’t be winning any awards soon. 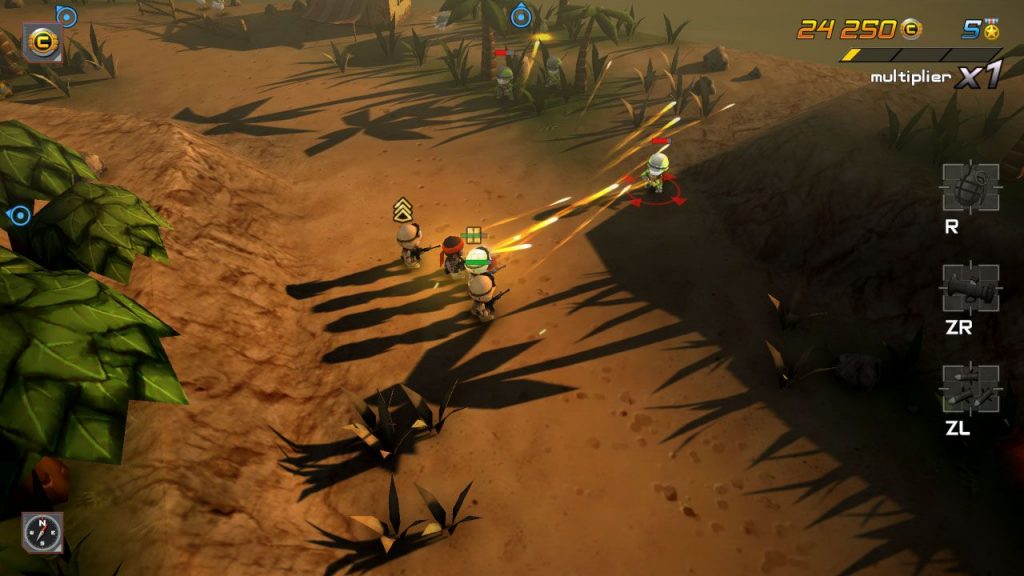 I can definitely see myself replying this game quite a few times, especially as I’ve mentioned before, the zombie mode. Casually waiting in the doctors or on a bus, it’s a very good time killer. The one big HUGE negative for me is that there is no Co-Op or online mode that would have ensured this game to live on beyond its days. It’s a bit of a shame because Tiny Troopers could really benefit from multiplayer as it would open up more strategic tactics and allow you to surround your enemies as opposed to constantly being surrounded. There could have even been a mode where you compete against each other to complete objectives like gather valuable intel or eliminate the enemy officer. There is no reason why it couldn’t work but I guess because the game is already finished as is, there is no reason to add to it now.

A really fun game to play now and again as it can get a little too repetitive to really give a lot of time into. The zombie survival mode, for me, makes the game. You could easily put a few hours into fighting your way through the horde to see how long you can last and try and beat your level each time. As mentioned, the biggest down fall being there is no online mode and this would have made the hugest impact on Tiny Troopers XL. All in all, I was surprised and entertained with what it offered and I will certainly have some time for it between waiting on my dinner in the evenings and catching the number 77 bus.

(Disclaimer: We received a code to carry out this review)