Tiny Trax by FuturLab can only be described as a Scalextric virtual reality game. When I first laid eyes on this game, I was flooded with nostalgic feels. However, when I got into the game those feels dissipated and left me with a small sense of disappointment. Only a small sense though.

Donning the VR headset for the first time you are greeted with pretty colours all around. Then dumped into a bedroom which is actually really well detailed. You then pick a track and race. Picking between six vehicles which have no difference in statistics, you then chose from either a single race, or a cup. I recommend going straight to the cup, you get to race on all the tracks, and doing so unlocks the tracks for use in single race. Regardless of where you finish.

What sets this apart from other racers similar in style is that with the PSVR headset you are able to look all around and follow the track as it moves around in the perceived space. Following the cars as they drift around corners and jump gaps is one of the best bits of the game.

Scalextric and slot car racers could be used to describe this game, however you do have control over the cars, yes you press one button to make them go faster. Head into a corner though and you have to turn the car, drifting around the corners fills up your boost meter so that you can catch up with the cars in front. Which, let me tell you, is ALWAYS going to happen. The AI in this game are incredible, or maybe I was just rubbish at the game. It took a great big effort on my behalf to get out of last place, with the AI cars always perfectly taking the corners. Perhaps this can get rectified with a post launch patch to lower the difficulty, but it did make the game a chore to play sometimes.

The game is designed to be pick up and play, and whilst this is definitely true, it will take you a while to master the control method. Soon though you will be tearing it up around the tracks, jumping over you, going underground and winding your way through caverns.

If you have a bunch of friends you can take the game online and compete in one of four cups, so pick your vehicle and head out onto the track. With it being a VR game, people will be wondering how comfortable the game is in terms of motion sickness. Though my entire time playing the game, there were no signs of any sickness. Personally I think that this was due to the fact you were sat still and following your car around the screen.

Tiny Trax boasts a vivid colour pallet and uses it perfectly to bring a vibrant and colourful world to your eyes. Get your PSVR perfectly in focus and everything just sits nicely in front of your eyes. Even the menus are clean and crisp.

From the space vistas to the colourful beaches, everything has a sense of belonging. Never anything seems out of place. On one level in particular you can even dunk your head below the water and look under the sea level. On a side note you also get a trophy for doing this. 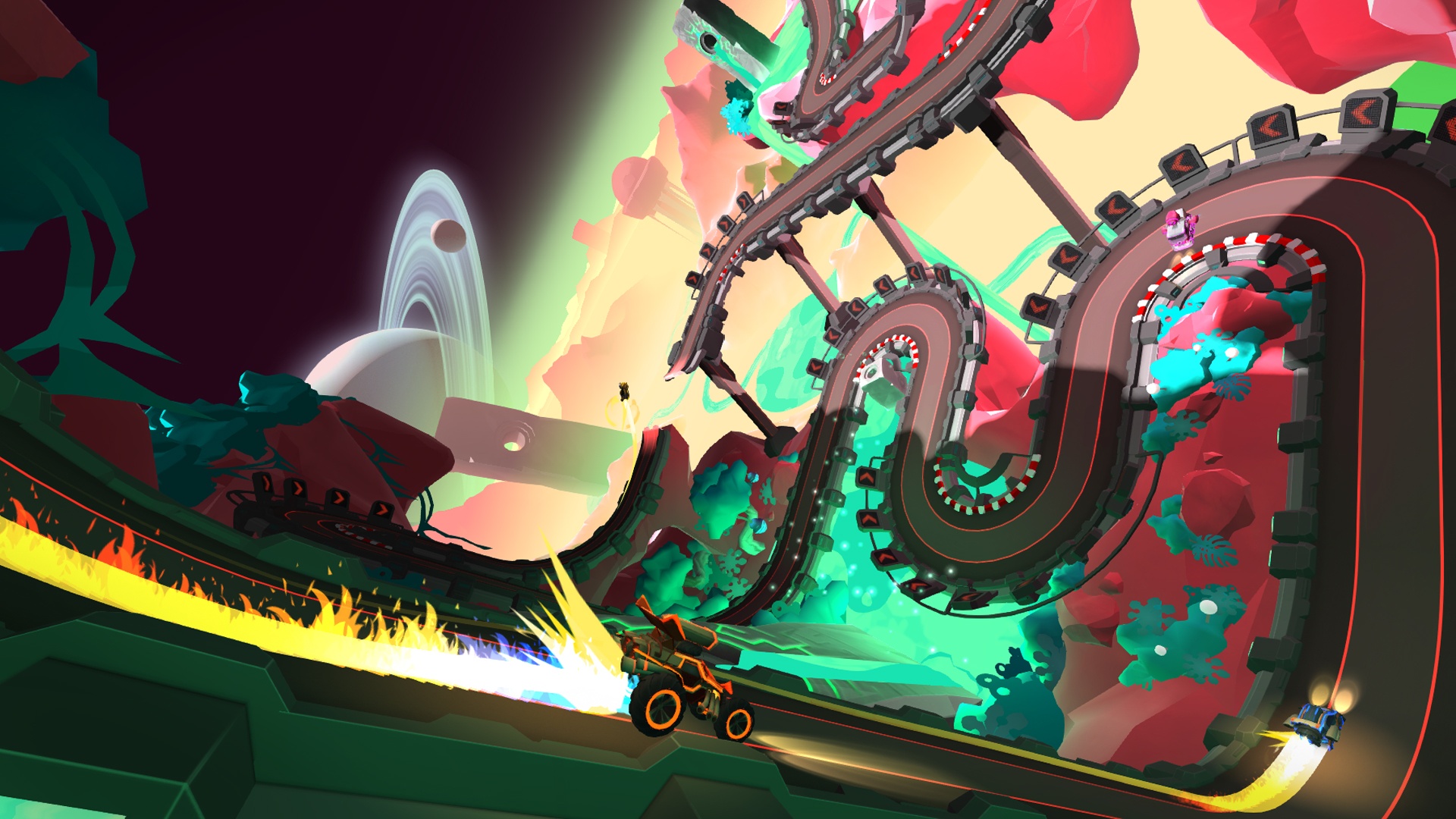 The engine sounds, and boost sounds are the general noises to grace your ears, but even these are clear and perfectly audible. You don’t get to use the PSVR’s 3D audio as the cars are generally in front of you, obviously if you turn your head to look elsewhere you get sound from the correct location that you would expect.

Tiny Trax does reward persistent play, with 4 cup options and 6 cars to try out. There is plenty of scope for coming back for a bit more. However without the need to come first in each race to unlock the next you aren’t restricted at any time of your gameplay. The multiplayer portion of the game was unavailable at the time of playing so this review is purely based on the single player element. 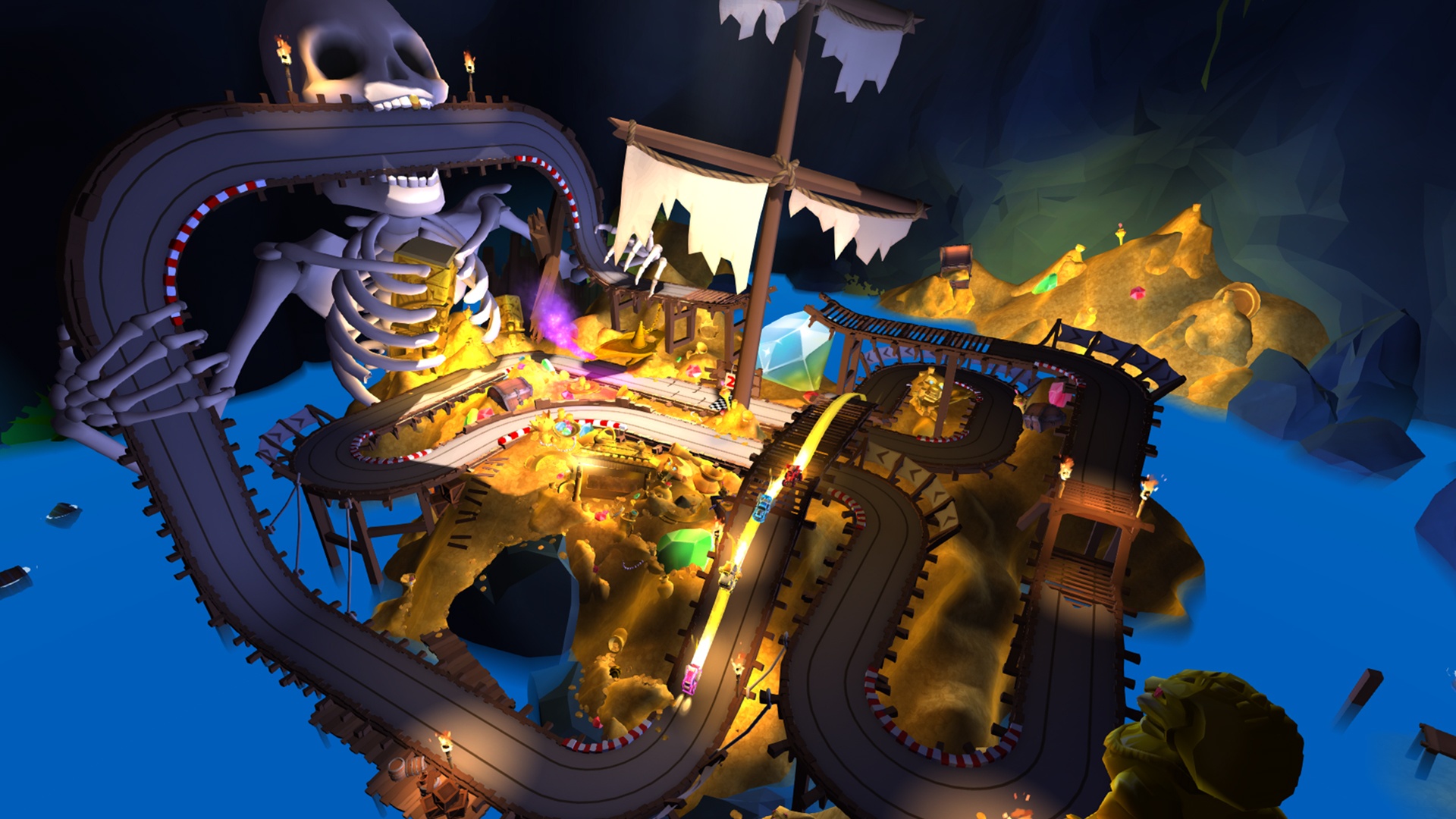 All in all Tiny Trax is a fun, game with a steep learning curve, but it does reward you for aggressive driving. Add to that the easy going VR experience, you can spend hours with the headset on and not feel any ill feeling whatsoever. Tiny Trax by FuturLab gets into second place with a Thumb Culture Silver Award.