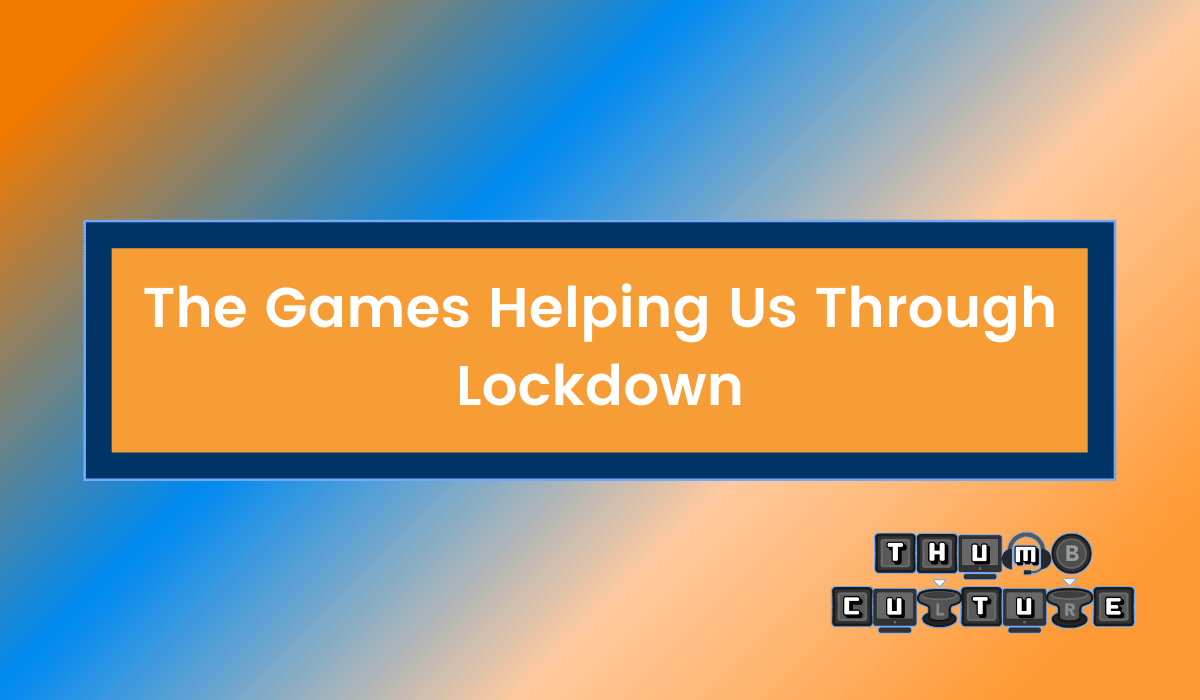 Well, what a year 2020 has been so far! I think it’s fair to say no one expected things to go the way they have. More than anything, whilst we’re in lockdown, we hope you all staying safe, staying healthy, and staying positive. Everyone has gone through their own difficulties over the last few weeks, and whilst we may now have a road map for getting life back to normal (whatever shape normal will be after this), we’ve still got to someway to go.

Here at Thumb Culture, we’re all trying to get through this situation as best as we can. Thanks to our passion for gaming, it’s made that journey a little bit easier. So let’s take a moment to praise the amazing work developers, creators, and publishers have put in. Or at least those we can pry away from Animal Crossing.

So, during this lockdown period, I have the great honour of being one of the key workers and as such have been working full time. Add to this having to balance child care due to nurseries closing has meant my gaming time has been sporadic. However, all is not lost.

Animal Crossing released right at the beginning of this period, and with the Switch Lite means that whilst my son naps, I’ve time to tend to my island. It’s really helped with my mental health as well. Being such a chill game is perfect.

When I do get some evening game time, I have tended to go towards Modern Warfare. I use it as a way to have a social gathering with friends, and a way to release from the days stresses and tensions.

Other than that, we recently started the TC Racing League on F1 2019. This has brought the steering wheel and seat out from under the stairs, and is firmly a fixture in the office. Racing around and concentrating solely on my lines is a great way to immerse myself in the game. If you’re missing the F1 season, then I highly recommend you come and check out the calibre of racing on show!

Lord of the Rings: Shadow of Mordor. Whilst in lockdown I have taken to looking at my backlog and dug this one out. A brilliant little open-world game that clocked in at around 20 hours, having also taken down the side quests. I really hope we see the nemesis system in more games in the future as it added some clever dynamics to the story.

I’m playing Call of Duty: Modern Warfare to stay in touch with my friends. I’m also playing Uncharted: The Nathan Drake Collection as I’ve never played them, and I’ve just moved onto the second one after completing the first one, totally loving them! I have also been running through Broken Sword 5: The Serpent’s Curse on my phone, the whole series is brilliant! Finally, I’m slowly getting into Animal Crossing on the Switch Lite as it’s casual and great for those quieter moments.

I’m currently rocking my new fight stick birthday pressie with Marvel Vs Capcom Infinite and King Of Fighters XIV, whilst spending time with family on The Division 2: Warlords of New York.

Counter-Strike: GO. Just been playing a lot of this as a multiplayer with friends. Perfectly designed to raise your temperature.

I started out lockdown playing some great old games I never conquered when I was younger. Over two decades ago, a developer known as Cyan Worlds started an epic puzzle adventure series. I have thus far beaten 4 out of the 5 games from the Myst saga, with the 5th to be completed before returning to my regular day job.

I also began another game I should have finished ages ago – the original Deus Ex, which released on PC in 2000. While my gameplay suffered some setbacks, including multiple lost save files and restarts, it’s a pleasure to get through this incredible game.

On top of all that, I’m completely addicted to Elite: Dangerous. Living the life of a mercenary space pilot, free to do what I want, is incredible. I’ve reached the point where I now have add-on programs to control my ship using voice commands.

Isolation is strange. It can spur a range of emotions. Some miss the jovial times down the pub and can’t wait to re-connect with society, others yearn for normality in this strange time. Unfortunately, I’m in neither of these categories and have manifested a deep disdain for society. Don’t worry, I’m not a sociopath, but I do enjoy playing games where I can kick the crap out of others in flamboyant style.

As a result, Platinum Games have been my saviour through this period of isolation. Starting with Astral Chain, and leading to Nier: Automata, I plan on making my way through their astounding back catalogue.

My lockdown period was short. I was furloughed for 3 weeks to begin with, and have now returned to work. It’s certainly testing times, but hopefully this will bring it the best in people and give us all a new understanding and better appreciation for what we have.

At the start of the lockdown, my copy of Final Fantasy VII Remake arrived early. I’m happy to say I finished in about 40 hours (and still need to keep playing to finish some achievements). I loved the game, and as a huge fan of the original, I was really looking forward to it! It plays well and looks amazing – I couldn’t help but stop and stare at the scenery on multiple occasions!

The two other games that have helped me relax are Euro Truck Simulator 2 and American Truck Simulator. I’ve already got hundreds of hours logged on both games, and they’ve both received a new patches.

The highlight feature in my opinion, and the biggest change, is the FMOD sound. You can now lower and raise the windows on a truck, with the outside volume adjusting. You now get reverb in tunnels, and the doppler effect! It’s made a huge change, and has only added to my immersion and enjoyment of the game. Can’t wait for the new maps coming later this year.

Stay safe and be kind all!

I’ve been playing Trials of Mana as much as possible as I’ve been preparing to pump out a review. It’s a pretty good time, although it definitely feels like an old game made new.

I’ve also been putting in a fair few hours on Animal Crossing, and now I’ve paid off my house completely, it’s starting to feel a bit aimless. That cool furniture just doesn’t come up often enough!

Aside for those two-time sinks, I’ve recently picked up Guilty Gear Xrd Rev 2. The animation and character design is great but I’m still waiting for the gameplay to click.

I’m gaming a lot more since lockdown started. I think it’s something that’s saving my sanity at the moment!

I’m mainly playing through The Witcher 3 as I started that in December and have hopped in and out. I love the storyline so far, and it’s definitely helping me pass the time! I’m also playing Fallout 76. I’ve been hooked ever since the Wastelanders DLC dropped as it’s far more engaging to play now.

It’s also a good time for me to try out games I don’t usually play as well. I’ve been tinkering with platformers and simulation games. All in all, I’m glad there are so many options for me on Game Pass. It’s really helping me stay involved with something other than the news!

I’m playing ‘install everything’ on my new PC.

In spite of everything, 2020 has been a good year for me personally. I got engaged at the start of the year, and had a new pup join the family. I’m also in an extremely fortunate position as I’m able to work from home whilst we’re in lockdown. The new pup does mean I’ve not had the time sink hours into Final Fantasy VII Remake like I wanted to. Instead, I’m playing smaller titles I can spend a fleeting moment getting lost in.
Not owning an Xbox One, the Switch port of Ori and The Blind Forest is my first chance to experience the game. It’s beautiful design is simply mesmerising, and Gareth Coker’s emotion-stirring soundtrack is stunning.
I’ve also taken the time to replay a classic – Castlevania: Symphony of the Night. It’s an all-time favourite of mine, and even when the port is as bare-bones as 2018’s Requiem collection, it doesn’t change the fact this is a near-flawless game. Every playthrough takes be back to the first time I played it.
For my third choice, it’s the recent port of Lonely Mountains: Downhill on the Switch. Even though I’ve only hit a couple of trails, I already love it. Addictive gameplay and a tranquil ambience, this game is perfect to get lost in.

What are you playing during the lockdown?

We hope you’ve enjoyed reading about some of the game helping us cope, and maybe it’s given you a little inspiration on what to play during these crazy times. Let us know what you’ve been playing.

More than anything, we hope you’re doing well.