The Final Station Switch Review – All Aboard!

The Final Station is a single player side-scrolling shooter with train simulator and exploration elements. It was developed by Do My Best Games and published by tinyBuild. It was released in August 30, 2016 for Windows, MacOS, Linux, and Xbox One, and September 2, 2016 for PlayStation 4 but, now we have it for the Nintendo Switch so let’s see how it fairs out on the must-have device at the moment, shall we?

A 2D shooter/survival horror experience, The Final Station has you play a train driver on a journey from being a “mundane conductor” to “zombie apocalypse destroyer” …what a leap! Set in a world whose history is hinted at but not really explained, your job is to travel to many train stations. At each one you need to get off the train, explore an area on foot, rescue some survivors, scavage for ammo and supplies and fight a lot of zombies before finding a code that unlocks the “blocker” (a device restraining your train) which you type into a keypad and thus allowing you to continue your journey to the next station. Like the Souls games, there’s no real definitive, concrete answer as to the nature or even string of events to why the world is the way it is. There’s something definitely sinister, man-made or otherwise.

During your train journey to and from each station, your objective is to keep your passengers alive and this is accomplished by keeping both status bars, for hunger and health, away from empty. While the method of execution is by no means sophisticated — merely requiring you offer a unit of food or a med-kit you’ve gathered while exploring around the train stations. There goes my idea that train journeys are peaceful and relaxing, not in The Final Station! Not only do you have to keep these little 8-bit humans alive but, also maintain the functionality of the train by checking the levels of equipment, more like a mini-game…like you didn’t have enough to do! Who’s ready for a drink? 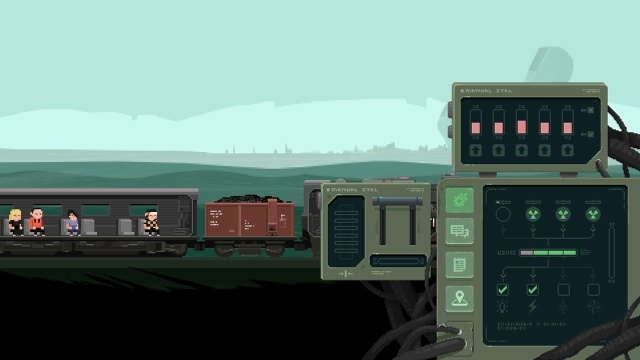 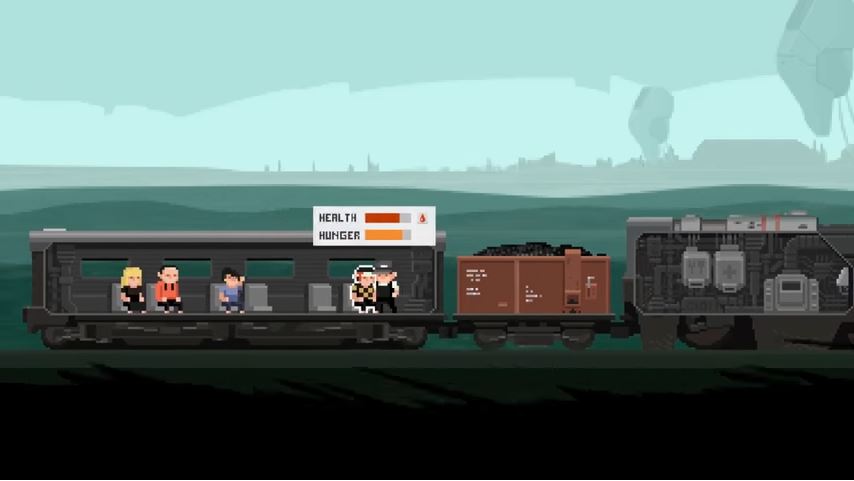 As you advance through each level, and more variety in monster types is introduced, (the armoured one, the explosive one, etc.) you will need to be quite tactical in your use of ammo (which is relatively scarce) and how you approach each room; some creatures can be meleed to death; others require hot lead, and some require a combination of the two. The aiming mechanic is incredibly irritating, as it is really imprecise and resulted in me wasting a ton of desperately needed ammo.

The checkpoint system is fairly forgiving though, so you won’t have to back track hugely far if the worst should happen but, without even a cost in terms of resources, it removes any sense of fear from the world. . What really elevates The Final Station beyond the usual pixelated fare is an emphasis on small details and narrative through level design. Every stop tells a story, every building is a mystery waiting to be solved. Since all the rooms are blacked out behind closed doors, there’s always an air of trepidation.

Passengers talk or at times argue among themsleves, dropping hints of backstory, but if you leave the carriage for supplies or handywork, you lose out on these optional conversations. Though the idea of eavesdropping on half-caught secrets is clearly intentional, this was an irritation for me.

The graphics are what you’d expect from a pixel styled design, though it does a good job allowing recognition of the environments and characters. My favourite visual pieces by far are the backgrounds you’ll skim past while travelling on the train, lush sceneries of mountains and fields for instance. While some may feel like the pixel-art is overdone in general, I can’t fault Do My Best for going down that route for their first game — its simple design allows for a lot of creativity. 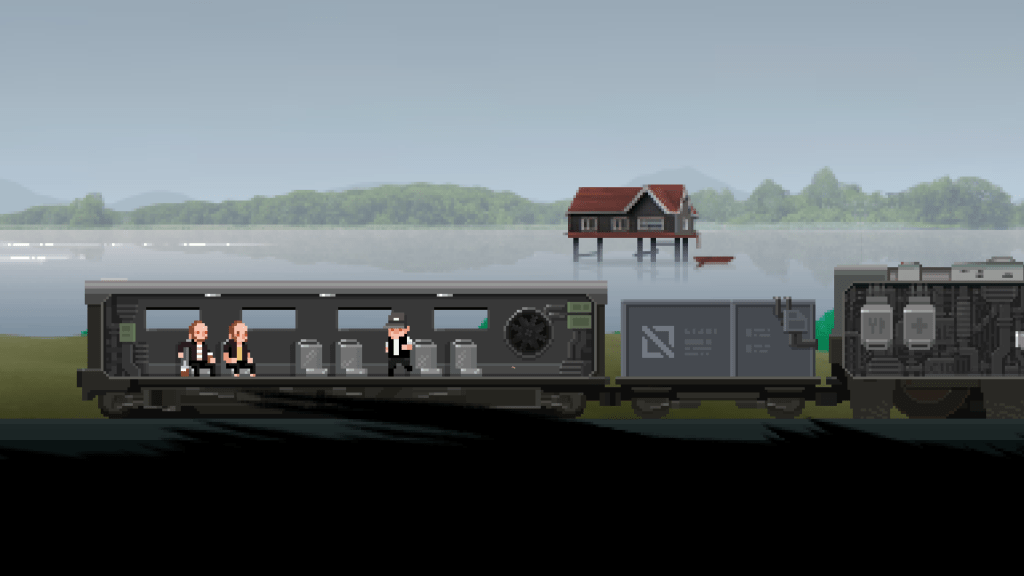 views from the train 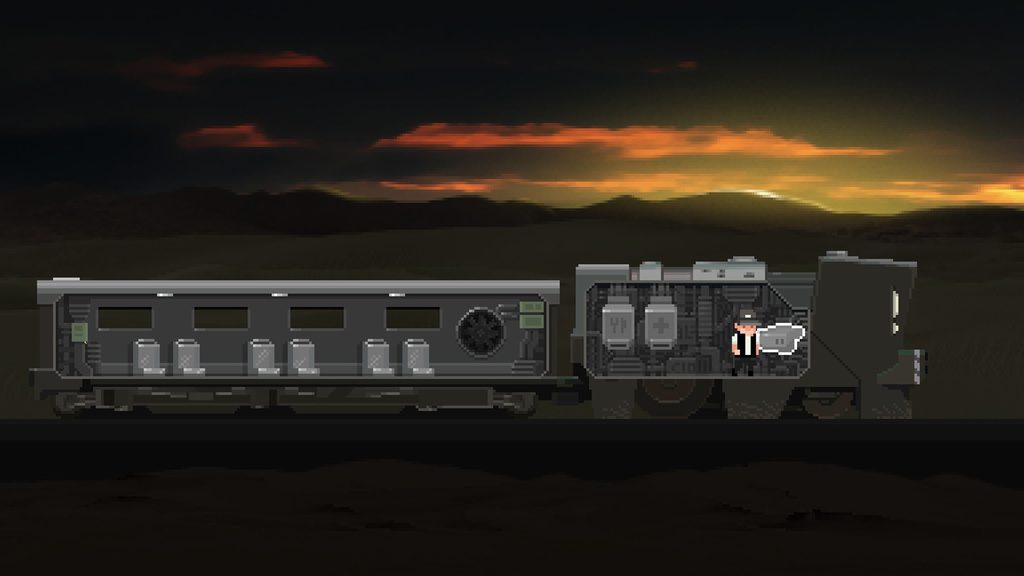 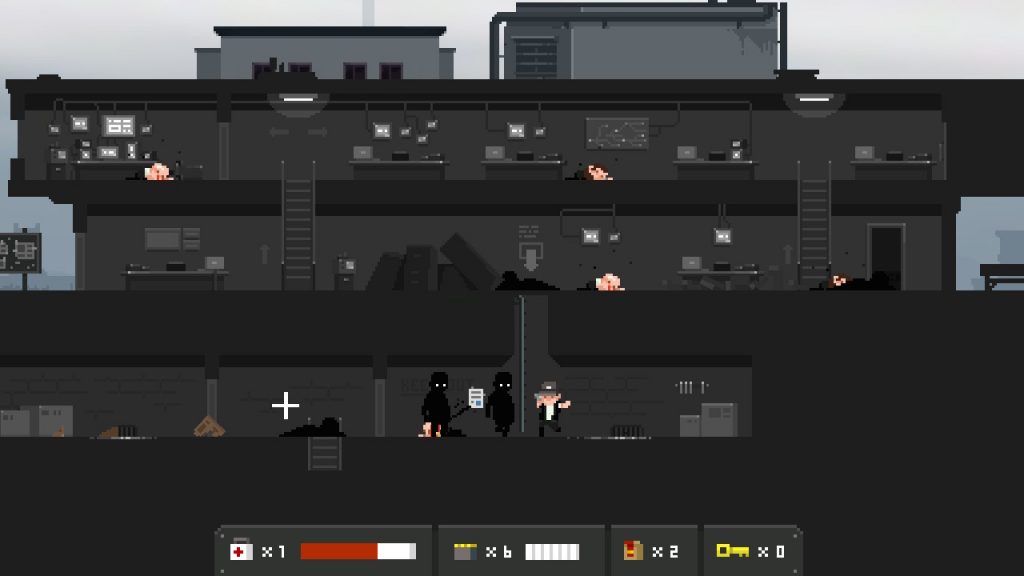 Unfortunately there isnt much in the way of sound in the final station but, i think this might have been intentional by the development team to make the world seem lonely and bleak but, in my opinion music is key in any video game I play; not only does it add an extra factor in your gameplay, it can also tell you (or at least make you feel) more in tune with whats happening. There is a bit of music in the safe zones and it’s nice enough, but I needed more of it and especially some ambient tones during the exploration sections. I would have loved some kind of climatic soundtrack to match the unfolding events towards the end, but they do provide a soft tone to the dead environments you’ll experience as you side-scroll. Unfortunalty this just wasnt enough for my “music craving” ears.

The Final Station makes for a good lazy afternoon’s gaming experience. Playthroughs will clock in at about 3.5 to 4 hours depending on thoroughness, and it is easily a time that can be sped up if you wish to play it again, assuming you’re the compeititve type. I think due to the repetitive nature this game can fall into in places and the lack of music to keep it moving, I wouldn’t find myself loading it up for another shot but, regardless of time and for £13.49, this title is fun and worthy of at least one playthrough. In saying that, there is a DLC available called “The Only Traitor” which I haven’t played yet but, this time you play a new character with a Muscle car instead of a train. It would be interesting to see where this DLC takes me and how it compares to The final station. I will definately update this review if I get a chance to play this.

In spite of an unfortunately lack of music and repetitive gameplay, The Final Station is still one of the most interesting survival titles in the genre at the moment. The game is straightforward and fun except for the frustrating abscence of instructions on how things work and at times can be quite lackluster. We all enjoy a low- budget horror movie from time to time, something you don’t take too seriously but, its all the same enjoyable on a rainy afternoon – this is what I would sum up The Final Station – simple and enjoyable but also repetitive and displeasing to the ear.

Disclamier – We recieved a code to carry out this review