Terminator: Resistance is an upcoming first-person shooter game developed by Teyon & published by Reef Entertainment, and is being released on November 15th on PC, PS4 & Xbox One.

The story is set in a post-apocalyptic 2028 Los Angeles and is the prequel to The Terminator (1984) and Terminator 2: Judgment Day (1991) films. The new Terminator: Dark Fate film that has just been released in cinemas does not have any connection with the Terminator: Resistance game, as the game is ignoring all Terminator franchise films after the original first 2 films, just like how Dark Fate is doing.

“The machines are destined to lose, but at what cost?” – let’s DUNDUN DUN DUNDUN jump on in. 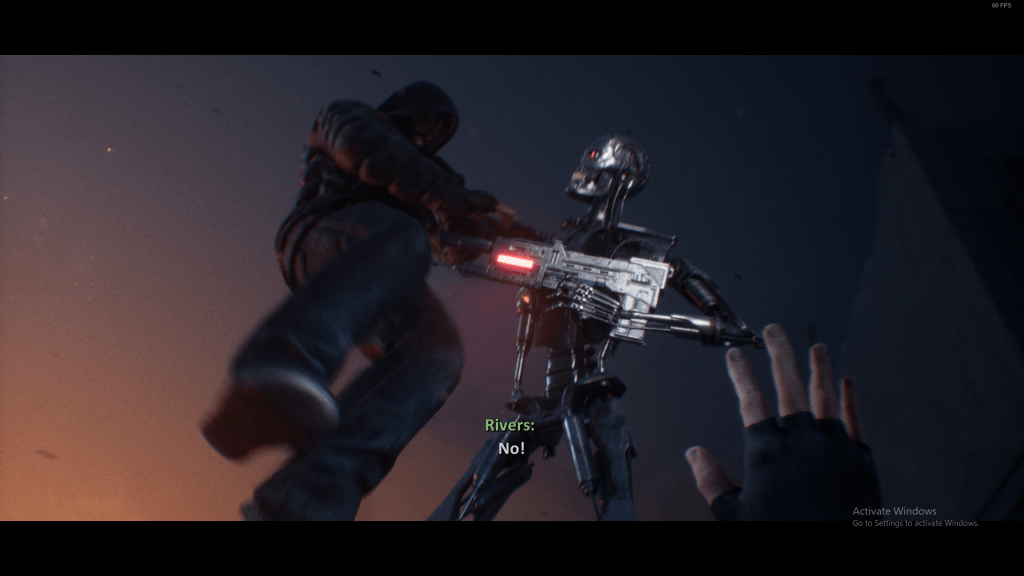 The premise of Terminator: Resistance is you take the role of Jacob Rivers, a soldier in the John Connor-led human resistance against Skynet’s robotic killing machines. The game starts up by you getting woken up after losing consciousness by a survivor right in the middle of the war of Humans vs Skynet. As he gets killed and you get thrown across towards a bus, you immediately hear a mysterious caller on the radio telling you what you need to do to get away and stay alive. As your sneakily try to avoid the Terminators and reach buildings to stay undercover, you come across some strangers who decide to gang up with you to reach a safe place. You explain to everyone that your entire division was wiped out and that your trying to get in touch with the South Division to give a message to Commander Baron.

After completing a few main missions to progress the story, and side missions like finding certain things for your group (e.g. finding a toy for a little kid to play with, or obtaining a boombox for another, random I know) you find weapons that you can use, and the ability to use ultravision goggles, which enables you to see enemies through walls. But note, when you use this, you cannot use your weapons and your movement becomes very slow. After a short while you find out that there is an “Infiltrator” that keeps coming after you, and it’s because you are, like John Connor, “marked for termination”. I won’t go into the reason as to why obviously, but ultimately you need to get to the Commander Baron of the South Division as quickly as possible, to explain all of this along with that mysterious caller that keeps popping up from time to time. 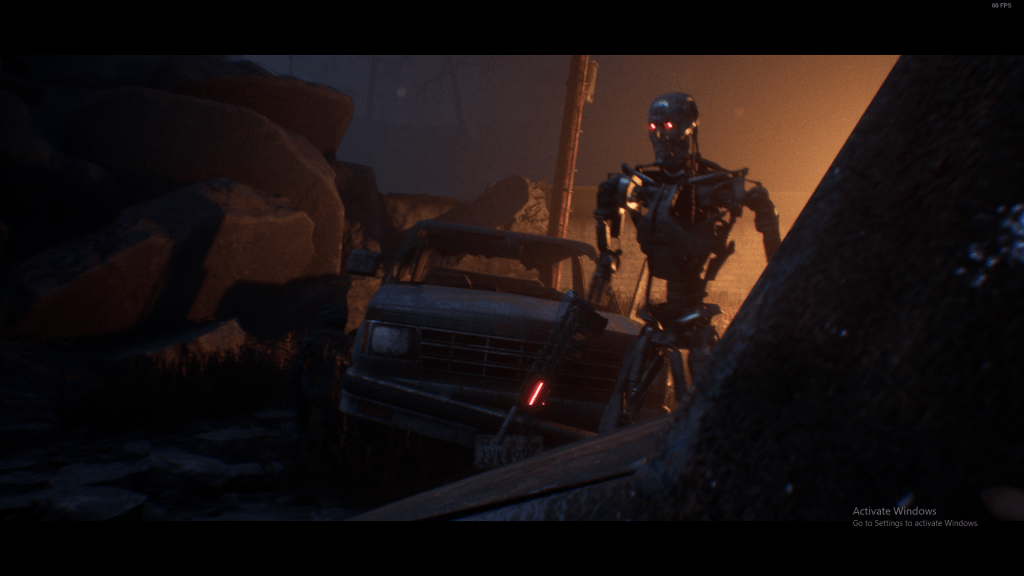 The key components of the game is like the majority of games, complete missions, partake in optional side missions, interact with survivors and gather resources from around the areas in order to use at crafting stations. At these crafting stations you can craft ammo for your weapons, medkits, lockpicks & many more. You can extend dialogue when talking between characters apart from the main talking points crucial to the game, to find out more of each person’s back story if you wish. There is a skill points system to Terminator: Resistance, where you can level up your “Combat”, “Science” & “Survival”. “Combat” is for increasing your stealth and your use of weapons & explosives. “Science” is for lockpicking, crafting and hacking, whereas “Survival” is for your ability to hold heavy items in your backpack, being tougher and a fast learner. You can choose to either run around and fight head on against Skynet using your weapons to survive, or you can sneak around instead in order to achieve your objectives. All these decisions ultimately lead up towards the decisive battle in the war against machines.

I must say I was pretty impressed with Terminator: Resistance. The game felt really smooth on my GTX 1060, and the loading times were super quick. Navigating the menus was swift, going from in-game back to the menu was high speed, no problems at all. It all just felt really really well optimised so a big thumbs up to the developers Teyon. Pass this on….I encountered no issues whatsoever. 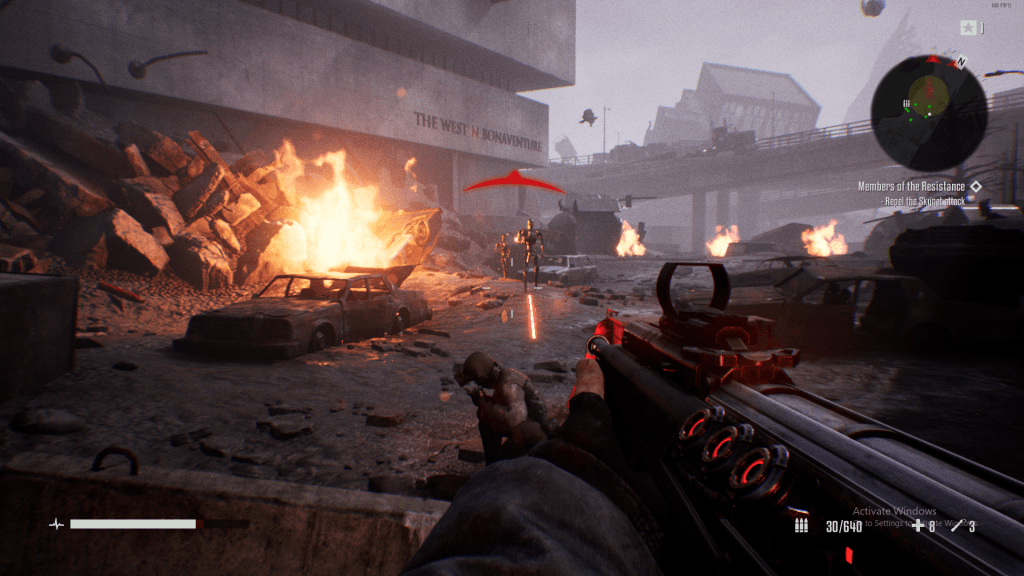 The audio in the game is solid. The usual sounds of guns, explosions all sounding really impressive as you’d expect. You hear A LOT of the legendary theme DUNDUN DUN DUNDUN during your playthrough, both at times when your fighting the enemies, and every time you get a new skill upgrade. Even though it was a bit excessive, I did find it both epic and amazing. The characters lip syncing was a little off, but there was not much else to complain about really.

After completing Terminator: Resistance, there isn’t much replayability apart from the multiple endings that can happen. If you wanted to play again for the story, then you can but at the moment, there is nothing new for you to get your teeth stuck into. 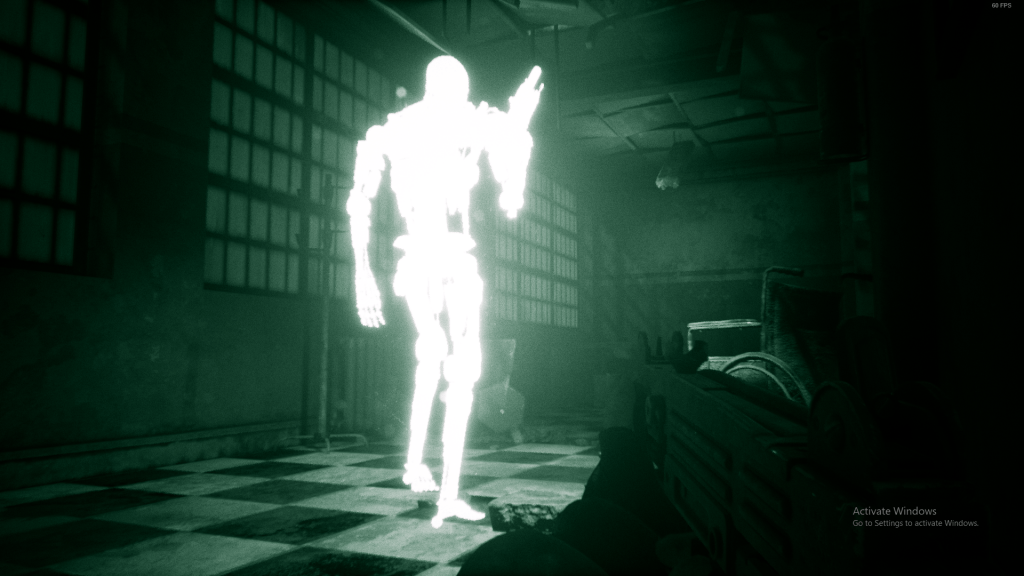 I really enjoyed playing Terminator: Resistance. I am a huge fan of the Terminator series and I was extremely keen on playing this. I must admit, there isn’t much to say in terms of things that were difficult or that annoyed me during my time in Terminator: Resistance. There was one thing the fact you couldn’t jump over fences, or climb up walls which did irritate me, but that’s it. I particular liked one mission where your in a hospital, where you had to stealthily sneak around all the t800s without getting caught, and there were quite a few of them. It was hard, and it felt I was trying not to breath just to try and be that extra quiet, because getting caught resulted in pure annihilation.

I wish the first half of the game had MORE of a Terminator feel though, because if you take away the machines you see, then you wouldn’t know what game your playing.  The 2nd half of the game was really good, the closer you got to the ending the better it got. I was kind of sad when I did complete it mind. I really loved the interaction with John Connor, I felt it was great having a distant relationship with the iconic character that all us fans love, I just wish Arnie was in Terminator: Resistance too (ha wishful thinking). This is a must play for all Terminator fans!!!