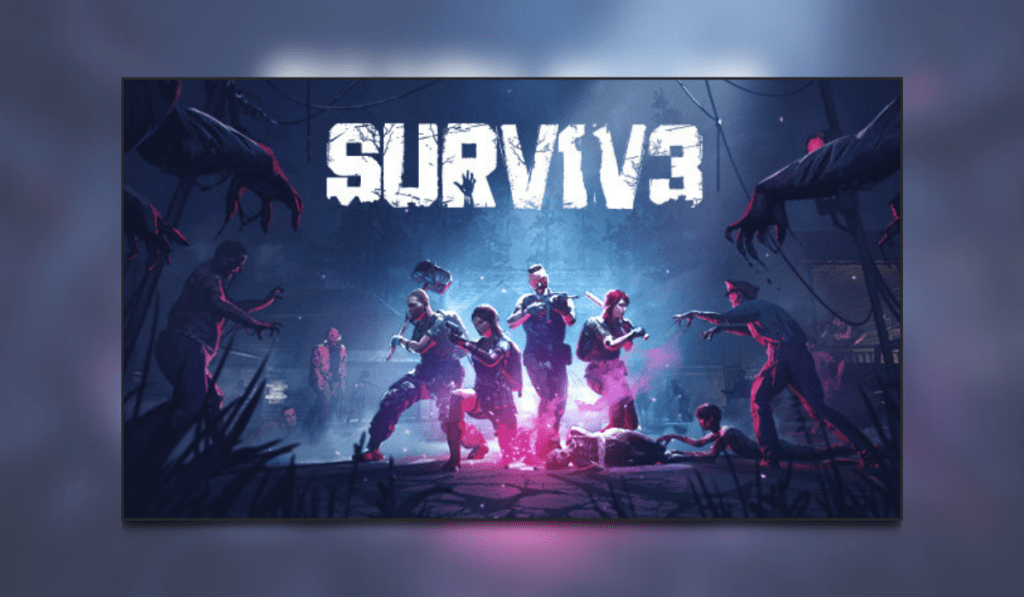 Developed and published by Candymakers, a 2-man team. A new zombie survival game has entered the arena. It was released on steam 20th June 2021 and is compatible with all PCVR headsets with their website showing Oculus, PSVR, and VIVEPORT as “coming soon”. SURV1V3 is a unique realistic zombie survival FPS game expressly designed for Virtual Reality that will let you test your survival skills. Let’s check out some gameplay.

In a world ruled by the dead, we are forced to finally start living

The V1V3 virus has spread worldwide killing billions of people. Do you have what it takes to save the world?

On first loading into the game, you are greeted with a menu board. This helps with collaboration and some options such as free or snap turning. You are then taken to a tutorial. You hear a car crash and awake on a road littered with crashed cars and barriers. This is probably one of the most in-depth tutorials I’ve played in VR so far. There is no hand-holding in the tutorial, just a large map and a structured path that takes you on a course.  While enjoying the sights and getting myself familiar with the controls I managed to get lost within the tutorial often forgetting that it wasn’t a story mission of its own. After around 45 minutes of getting caught up in such an open map, I had finally finished the tutorial and was instantly eager to delve deeper into the story.

On the main menu screen, you check yourself out in the CCTV feed, head over to the fully kitted out shooting range that houses all the fully modified weapons available in-game or choose between the 3 game modes available.

Starting with the fantastic story mode. There are over 18 hours of gameplay in story mode alone. Starting from the end of the tutorial with more basic load-outs you can slowly find new weapons and learn skills in weapon modding. Various sights, lasers, and flashlights needing to be found throughout the city before being readily available to equip on your weapons.  There are also ammo upgrades you can find throughout giving access to better-classed ammo.

A “Trials” mode is your typical horde defence play. Trials challenges are alternate missions requiring a particular skill and strategy to be completed successfully. There are 3 maps available to play in Trials mode; Last Garden, Hell Street, and Big Bird. All 3 have different play styles and objectives to complete.

And finally, a Survival mode. The survival mode is an in-depth area of the gameplay. With a levelling system that works by gaining experience from kills unlocking new rewards as you progress. Crafting, which is done by accessing crafting machines to produce new and better weapons/ammo. Looting and feeding making you push to collect as many resources as possible from your patrols. Random events such as supply drops can also occur so make sure to keep an eye on your map for those as well but watch out for the zombie bosses as you journey through the city.

As we all know, no good zombie game is complete without a mixed bag of special AI to take down and SURV1V3 is no exception. With 6 different classes of AI that can spawn you are kept on your toes waiting to see what’s lurking around every corner.

Each class has different strengths and weaknesses and you will need to learn them all to stay on your A-game. Luckily you have a diverse arsenal to call upon. With Various Pistols, SMGs, ARs, Shotguns, bows, and melee weapons to chose from you really are spoilt for choice.

All my testing was carried out on an Oculus Quest 2 via Virtual Desktop. The ability to play this wirelessly while maintaining such high levels of graphics made for a highly immersive experience. From the bright neon lights in the menu screens to the dark rural areas of the open map everything built a very atmospheric feel which kept me on my toes. There is no in-game HUD to maintain a realism approach instead opting to use a tactical tablet which really sets the game apart and makes for a more enjoyable experience.

All weapons are very detailed as well. Sights and scopes also work well. You can really tell a lot of time and effort went into the designing of all aspects of the game.

Audio cues work well and give you an immersive experience allowing you to hear when the AI is located and which direction they are heading in. My only negative with the audio would be the “clank” noise when you collide with stationary objects with a weapon. They all sound the same no matter the collided object, however, this would be my only criticism.

With its variety of game modes and its 18-hour story mode, there is a lot to be doing within SURV1V3. The ability to play as a 4 player co-op experience with 3 friends only adds to the replayability of the game. Replaying Trails, Story, and Survival with a team can alter tactics and opens more possibilities. There are also 114 achievements to try and get as well.

This is the developers’ first game to launch on steam and I have to say they have done extremely well. So many aspects of the game all work well together and flow naturally. As a solo playthrough, I thoroughly enjoyed my time in-game and will be continuing to play this post review. With more platforms advertised on their website as “coming soon”. If they can add cross-play features into the mix then this would only get even better. I loved playing this and have recommended it to others following on from my gameplay. Therefore I award SURV1V3 a Thumb Culture Platinum Award.