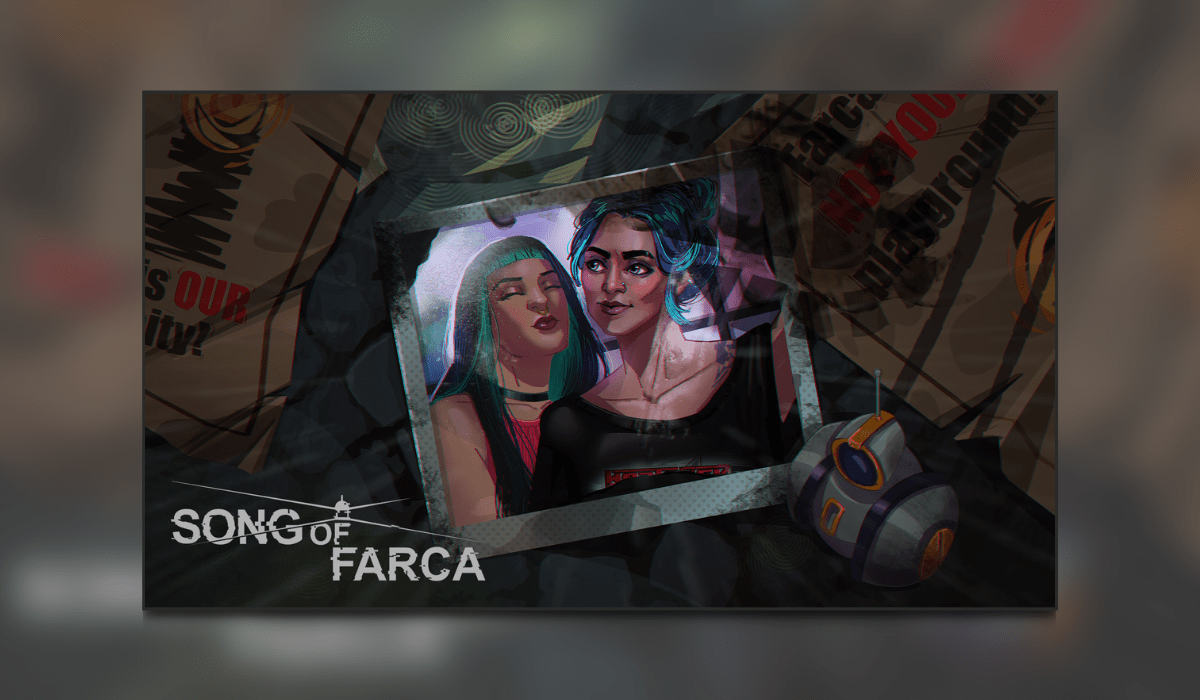 Song of Farca is the second game by developer Wooden Monkeys, following Save Koch. Instantly you can tell that they’ve built upon the style of game they created with Save Koch for this new release. What they’ve brought to us here is a 2D story-driven hacker sim with plenty of puzzles and choices to make along the way. You play private investigator Isabella Song, or Izy, as she starts to rebuild her career after spending a stint in jail. You’ll meet a number of interesting, recurring characters as a multi-threaded narrative weaves together and the consequences of your actions take shape. Black Mirror-esque themes emerge in a world where technology and corporations rule. Join me below as I take a deeper look at Song of Farca.

Song of Farca – Can She Hack It? Yes, She Can

Having grown up playing Uplink a fair amount, the chance to jump in on another hacking sim really piqued my interest. Are there any similar games you’ve played that you can recommend for me or others with a liking for this genre? Drop a comment below and shout them out.

Song of Farca’s UI is split horizontally. On top, you have a live view of Izy’s apartment so you can see what she’s up to at any moment. Although you have no control over Izy herself, some story elements take place in the apartment for you to watch. The lower half of the screen gives you a live view of Izy’s computer and is where you are able to take actions in-game. A really nice touch is that you cannot interact with Izy’s computer if she is AFK (away from keyboard). It’s a great mechanic that adds some realism and tension. On the PC, you take/make phone calls, hack and build your case. This is where you’ll find the core mechanics and gameplay loop.

When Izy first takes on a case, she’ll generally have a couple of contacts she can call, and some information she can search the web with to find further details. Phone calls are about 80% set dialogue, but you also get to make a couple of choices. These conversations, or interrogations, are where you can leverage any clues you’ve discovered to press people for further information. It works very similarly to the questioning system in L.A. Noire. Song of Farca builds on that really well though, by letting you link 2 pieces of information to form a ‘conclusion’. These can help elaborate or contextualize certain elements. Thankfully, there is no fail state if you use the wrong evidence. Occasionally it took me a few attempts to link the correct pieces.

Izy will come across places of interest in her research and will then use her hacking skills to investigate them using cameras, drones, and ‘bugbots’. This mechanic works in much the same way hacking did in Watch Dogs. You get control of a camera or a drone, and you can then usually only hack another point within view. By doing this you can eventually make your way around a room or building uncovering information. Later in the game, some more mechanics are introduced and you’ll be puzzle solving with doors/fans and lasers. If you discover something that is password-protected, you’ll often need to find clues lying around that can be deciphered to give you a 4 digit code. Some of these puzzles were really fun and clever, even if they did leave me scratching my head for a while.

The previously mentioned split-screen layout works perfectly for Song of Farca. It’s something I’ve not seen done before and adds a level of depth to the game. The element that would make or break this game is the UI for Izy’s PC. I can confirm that it is designed fantastically well. It contains all the information you need whilst avoiding become cluttered or overwhelming. On the right side, you have an email inbox that is used for cases and also contains clues for riddles you can optionally attempt to solve. On the left is a list of contacts for the current case and your AI assistant. This contact list clears down after each case to keep things tidy. There’s also a link to your investigation board.

The investigation board shows all the elements of the case and how they link together. Selecting one of them will open that item and give you further information you’ve discovered about it. This information is presented clearly and is quickly skimmable. For instance, if the item is a person, the info is presented as a business card with a photo. I’ve included screenshots of a few different UI scenes so you can get a good feel for how things look throughout the game.

While the soundtrack isn’t extensive or stand-out, the music complements the action; the main backing tracks are electronic and mysterious. A piece that plays during the final case adds a real sense of urgency to the action that had me even more gripped by the events.

Song of Farca is around 8 hours for a full story playthrough. One thing I didn’t focus on during my time with it was the riddles. I could see those adding a couple of hours onto the playtime. There are choices you make along the way that could lead to different endings so it’s possible to enjoy a couple of playthroughs to see how things play out. The autosave means you can’t cheese your way out of a bad decision once it’s been made so beware!

While the hacking mechanics don’t really compare to Uplink, I had a lot of fun with Song of Farca. The gameplay loop is repeated much the same way throughout. The story and the gradual addition of hacking elements keep things fresh. The story is probably the biggest draw for the game, and it is complemented by the gameplay. The characters are well written and interesting and the elements tie together satisfyingly as the story progresses.

I played in the few days following launch, and whilst there were a few bugs, the developers released a hotfix patch very quickly and even live fixed an issue with my save file within minutes after chatting with them via Discord. If the story of a PI getting enveloped into the seedy underworld of a corrupt city with a big reliance on technology sounds like your cup of tea, check out Song of Farca. I give it a Thumb Culture Gold Award.