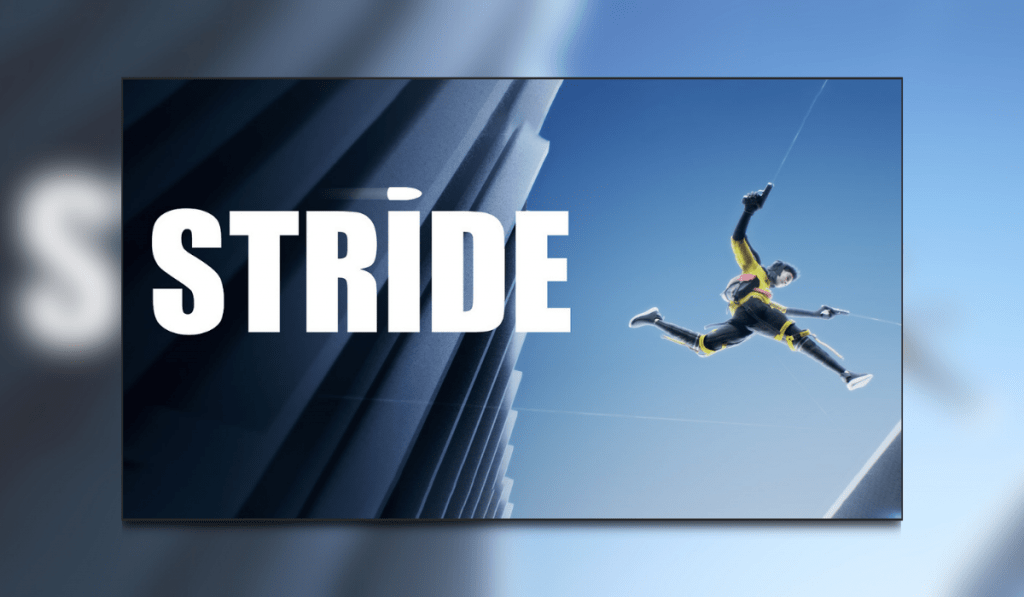 Stride, developed and published by Joy Way, is a single-player VR parkour game that features a combat element to it.  Out now on Oculus Quest 2, PCVR and Vive with PSVR coming at a later date, it is touted as a “high-octane parkour adventure in virtual reality”

Stride, One hell of a way to keep fit!

I’m not the best at motion games however on the Oculus Quest 2, Stride is listed as “Comfortable”.  Let’s take this for a test!  If you are playing this version or any of the early access versions, let us know what you think of it in the comments below!

When I think of parkour games, Mirror’s Edge immediately comes to mind.  Running, jumping, sliding, grappling and firing a gun nicely sums up Stride however there are a few more mechanics at work thanks to the wonderful Oculus Quest 2.

Playing the tutorial and each of the stages within presents you with a new movement to master.  Starting from the basic jump whereby you hold down “A” and swing your hands up while walking forwards with the left stick is your first challenge as you leap from platform to platform.  Having mastered the Mexican wave to anyone else watching you in the lounge, you then move on to climbing walls using each of the hand controllers as you normally would.  Running is conducted by rapidly motioning your hands up and down like an Olympic sprinter.  This is really starting to turn into a workout as I feel my lack of fitness begin to kick in.  At this point the motion is not actually that bad, having had the option early on to either use a snap to turn with various degree settings available as well as smooth locomotion.  Thankfully you can override all of this by simply turning your body to face the direction to go which is the way I tended to play Stride.

I haven’t been to Go Ape!, a real-life climbing and swinging through the treetops park for a couple of years, however, already this was starting to feel a little bit similar.  Although I wasn’t exactly wall running trees during my time there, the use of zip lines was pretty close to the same feeling I had while grappling hooks were simply amazing as you cast yourself through the air.

When it comes to shooting you have a pistol that you can access at any time from your chest holster.  With 7 shots in the reloadable magazine, you must make them count as enemies appear with laser dot sniper rifles in front of you.  Leaning your body left and right allows you to avoid the bullet while ducking down puts your character into a crouching position, useful when sliding under obstacles.  The 3-second focus mode allows you to feel a little bit like Max Payne as you go into a slow-motion John Woo moment that can be during a mid-air jump if you so desire, albeit minus the white doves slowly flying past.

With the tutorial all over it was time for the main game modes.   Currently across all platforms is 3 arcade game modes; Arena, Endless and Time Run.  Looking at the press notes it appears that a full-blown storyline campaign is hopefully coming in Q3 but for now this early release is to gauge what players make of Stride.

Each of the available game modes makes use of the parkour, and at times, the shooting mechanics that you have already been through via the tutorial.  Time Run is what it says on the tin whereby you can participate in various courses of differing difficultness in an attempt to score your personal best.  You will also be linked up with a global leaderboard that holds some insane times!  Endless mode is similar to time run however you are being chased all the way by a gradual decay that corrodes the platforms behind you, the goal is to stay in front of it for as long as you can.  A few bad moves and it can easily all be over.  My favourite game mode by far was Arena.  Here you are given objectives such as take out the enemy, retrieve cases and go through waypoints all while on the top of fully rendered city blocks.  You are not really held to a defined route to run and jump and it is up to you to skillfully launch yourself and successfully grab onto rooftops, air handlers and guard rails.  If the campaign is anything like Arena then it will be a really fun affair.  Ducking and diving enemy bullets is great, just remember where the objects are around your room!

Graphically, Stride is ok as far as games look on the Oculus Quest 2.  The textures are fairly simple for Time Run and Endless mode while it is really only the Arena mode that perhaps gives you a taster of what the campaign may be like with a fairly decent looking cityscape.  The motion can make you a bit sick at times such as if you decide to walk over a ladder that is laying on a rooftop as it jerks up and down on every tread that you pass.  The actual jumping, sliding and grappling is pretty smooth going where it is your physical actions that can sometimes not make it as graceful as it should be.  As with any VR game, there are a few glitches here and there however this is an early version of the game.

When it comes to audio, there is an ambiance along with background music that heightens during tense standoffs and objectives during the Arena mode.  The tutorial is fully voiced along with videos that are cast from a nearby flying drone to reinforce what you need to be doing.  Other than some sound effects for firing guns and reloading, not much else is really needed here.

I found that about an hour was all I could tolerate on Stride.  I am not sure if it was motion sickness or physical exertion to be honest, probably a bit of both.  Although the game can be played in a seated mode you really wouldn’t get the most out of playing it by doing this due to the motions required throughout the gameplay.  The arcade modes are fun for a bit however the tutorial is probably the best at showing off everything that can be performed in the game.  When the story campaign is released then longevity will be higher but for now, you are left chasing those elusive times that have been set on the global leader board.

Stride is definitely one to have a play with on VR.  It has some very clever mechanics that aid the realism that you feel as you jump from platform to platform.  Stride is definitely a bit of a workout as you will enjoy the rush of running fast across the rooftops and therefore be hammering your fists up and down to maintain the momentum.  Perhaps playing with a fan hanging from your head is the way to go here.  I look forward to seeing how Stride develops as the devs are looking for feedback before they release the campaign element.  From what I have played it is a challenging and rewarding game that is worthy of the Thumb Culture Gold Award.