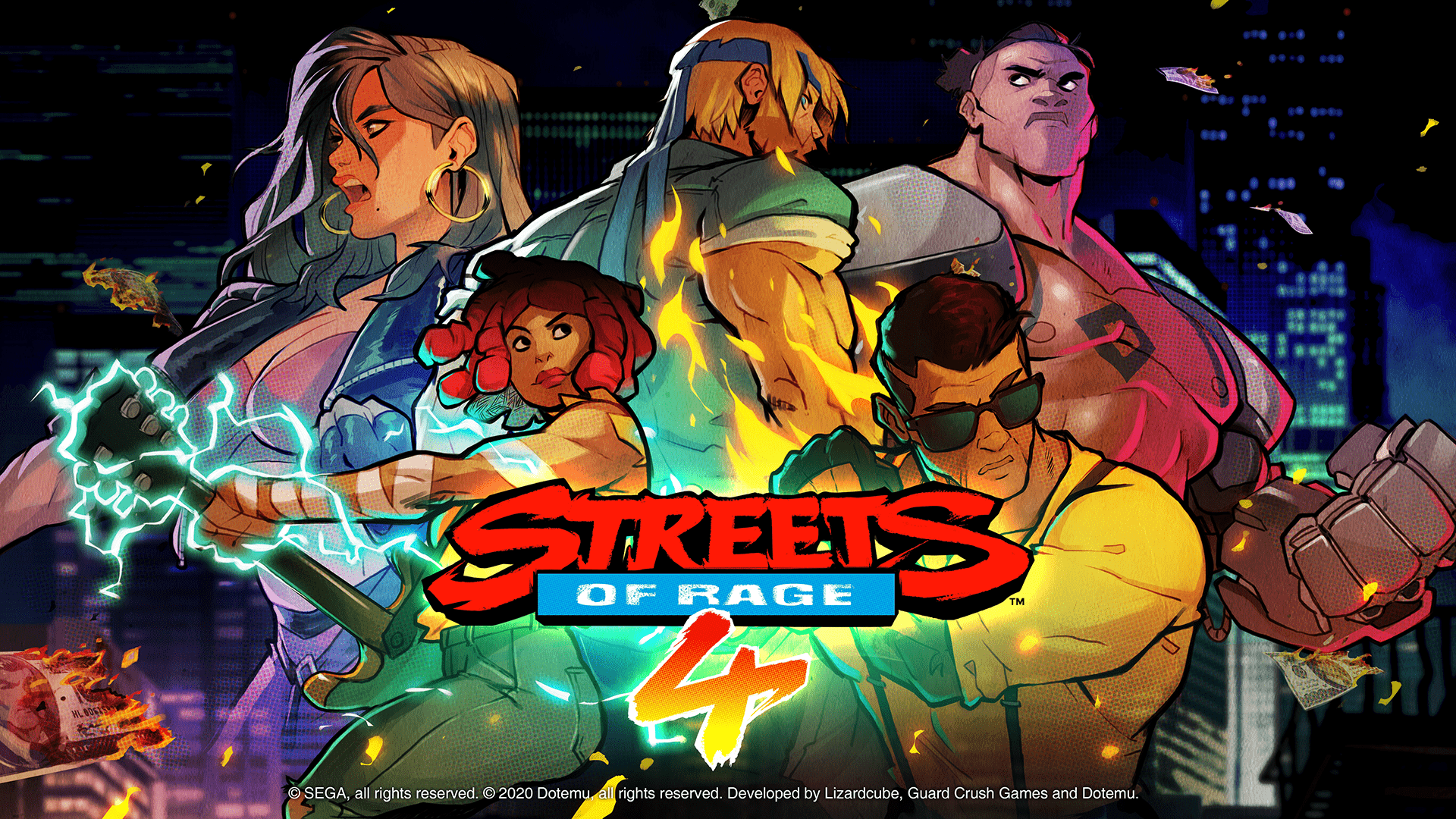 It’s been a long 26 years for fans of the classic beat ’em up series, but finally, Streets of Rage is back! Constant rumours and rebooted projects have given plenty of hope for a fourth title, but it just never materialised. Now that’s all changed.

Published and developed by Dotemu (alongside Lizardcube, and Guard Crush Games), Streets of Rage 4 hits PS4, Nintendo Switch, Xbox One and Steam on April 30th. As some of my earliest gaming memories involved taking every chance to shun my Super Nintendo, sneak into my brother’s room and take down Mr X as many times as possible, you better believe I jumped at the chance to dive back into the city.

The all-time classic Streets of Rage, known as Bare Knuckle (ベア・ナックル Bea Nakkuru) in Japan, is a trilogy of beat ‘em up known for this timeless gameplay and electronic dance influenced music. Streets of Rage 4 builds upon the classic trilogy’s gameplay with new mechanics, beautiful hand drawn visuals and a God tier soundtrack.

For the majority of readers, I’m sure at some point you’ve played a Streets of Rage game. Although the fourth game has taken a long time to get here, Sega has taken every chance to port the original titles to every console possible. Streets of Rage 4 continues the tried and true arcade beat ’em up thrills, just with some modern touches to bring it a little more up to date.

Like all classic beat ’em up titles, you work your way across a level punching and kicking everyone in sight. Weapons litter the streets, so don’t be afraid to pick up a pipe and embed it into the cranium of your enemies, they certainly won’t hesitate doing it to you. And always, if you are on the wrong end of fist, there’ll be a trusted cooked chicken in a phone box somewhere.

It’s a simple formula, and done right, it’s endlessly repayable. But it’s a old formula, so fortunately Streets of Rage 4 has updated things. Like in previous titles, characters have one attack button which performs a simple combo. You also have a special attack which you can use at any time, but it will cost you a little bit of health.

Taking a cue from the first title, you also have a limited use attack which takes you a decent majority of the screen. Holding down the attack button also lets you perform a heavy attack. These simple mechanics are blended into a responsive and intuitive combo system, which keeps the combat flowing at a superb pace.

It’s a wonderful way to modernise the game whilst remaining true to the series.

Bringing a retro title into the modern age is always a dilemma. Do you stay true to constraints of the original consoles, or do you take advantage of the power available today. Streets of Rage 4 takes the latter route, and whilst the screens look strikingly different to the original trilogy, Lizardcube have worked the same magic they used for their recent Wonder Boy releases.

The hand drawn art is vibrant and a visual pleasure. In stills, it’s impressive. In motion, it’s glorious. Animations are gorgeous, and just add to the shine and charm of this game throughout. Clearly, a lot of attention to detail has been put into every aspect of this game visually. All the developers have shown a real reverence for the series and updated things with the greatest of care. New additions work well, and don’t feel out of place thanks to the cohesive art style.

Looking at Streets of Rage 4’s level design, overall it is good, but it could’ve been better. There’s plenty of detail and Easter Eggs that long time fans will get a kick out of. But, some levels are far more impressive that others. That’s not to say any of it is bad, just, I wish overall, the game was a little more consistent with it’s high points (apologies for being vague here – I just don’t want to spoil any of the moments for you).

In between levels, the games narrative is told through highly stylised animated comic book panel style scenes. If anything, they’re on the simpler side, but they work. The story itself is serviceable and keeps things moving. It’s not a focus of the game, and lets face it, it doesn’t need to be. If anything, having something to in depth would’ve taken away from what we’re looking for.

Now this is an important matter. Streets of Rage has a timeless soundtrack, and one that regularly will be at the top of greatest soundtrack lists. At the time, the incorporation of electronic and dance music was unlike any other game out there. And it wasn’t just a gimmick. It features incredible compositions which nail the atmosphere and tone of the game. Fortunately, as much care has gone into Streets of Rage 4’s  soundtrack as you’d hope for.

If you missed the build up to this games release, Dotemu put fans minds at ease when they announced an impressive roster of musicians working on the title, including the original composers Yuzo Koshiro and Motohiro Kawashima. The result of this is a fantastic audio experience which lives up to the hype.

It’s energetic in all the right places, and every beat will get you pumped as you work your way through the city. This is one game you’ll want to get your best headphones or sound system out for. I’d also like to give the game props for incorporating the soundtrack into the story. It’s not the most mind blowing of ideas, but it’s just a wonderful nod for fans. Besides, if for some reason the soundtrack doesn’t work for you, don’t worry, you can switch over to retro tracks at anytime.

Outside of the music, sound effects and voice work fit perfectly. It uses plenty of classic sounds from previous titles, and the beefy visceral sound of punches and kicks always satisfies.

Hopefully you’ve gathered that Streets of Rage 4 stays true to it’s roots, just with some sensible additions. And this is the case for how the game plays out. It doesn’t needlessly add an overworld, multiple routes, or RPG mechanics for the sake of it. You play through 12 levels and watch the credits roll.

Yes, if you want to complete the story once, you can be done with it in a couple of hours. However, it’s an arcade experience. Thanks to solid gameplay, repeat playthroughs are just as enjoyable as the first. And thanks to plenty of unlocks, it’s not just chasing a high score or better ranking. There’s decent rewards too! The game also supports 4 player local co-op, and 2 player online. It all makes jumping into the game over and over a joy.

Outside of the main game, Streets of Rage 4 features a boss rush mode, and a battle mode (up to 4 players in a slightly more traditional fighter). They’ll hold your interest for a little while, but don’t expect them to become a regular go to mode.

For those who Streets of Rage gets its hook into, there’s endless replay value. However, it is worth bearing in mind, there isn’t a lot of variety to proceedings. You don’t learn any new skills, and levels play the same. If you don’t find the gameplay appealing, things will grow repetitive, quickly.

Streets of Rage 4 is a brilliant title, and shows how to bring a long dormant franchise into the modern age. It’s timeless gameplay is as strong as ever, and every bit as fun. Not all levels are as strong as each other, and ultimately, if you don’t enjoy the first level, there’s nothing later in the game to change your mind.

For those wanting a solid arcade experience, and a game to just enjoy with beautiful visuals and a killer soundtrack, look no further. This franchise means a lot to me on a personal level, I’m extremely happy to award Streets of Rage 4 a Thumb Culture Gold award.