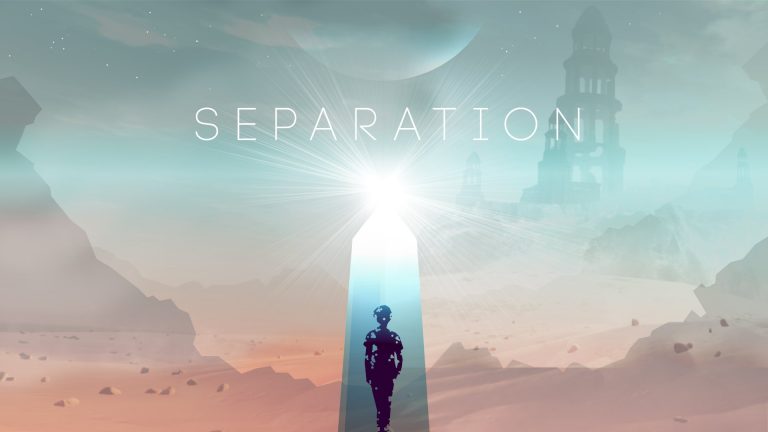 It seems very apt in these strange times to be reviewing a game about separation and isolation especially one that is somewhat different from the normal PSVR fare.  Solo developer Recluse Industries (Martin Wheeler) has released his first-ever PSVR game in the shape of Separation. It is essentially a very personal game and is born out of the death of the developer’s father in 2010 and Wheeler’s consequential episodes of depression. Wheeler has said that he wanted to create a space where he could explore the feelings of emptiness and loss. He intriguingly describes Separation as an “Ambient Adventure”, and a spiritual journey into epic desolation with relaxed exploration with some puzzle elements and no time pressure. He is at pains to state that it is not your usual PSVR walking simulator but something more. Therefore not your usual ingredients for a video game by any stretch of the imagination. So does it live up to the developer’s description? Or, it is another entry into the long list of PSVR walking simulators he is keen to distance it from. Read on to find out.

The game starts with you seemingly exiting what appears to be a sleeping pod. There are absolutely no prompts or directions and this is very deliberate. You will find yourself walking outside and into the unique landscape of the game. The game world consists of a mixture of medieval ruins, industrial structures, fallen colossi, mountains, canyons, and bodies of water. I found myself immediately drawn to a huge tower/castle-like structure with a long bridge flanked by grim reaper like statues.

Shortly after entering the tower, you reach a dead-end and what appears to be a wall of a cell with something imprisoned behind it. A disembodied voice/spirit is heard and gives you your first bit of direction in the game. This mysterious spirit voice speaks to you at various points in the game, mainly when you pick up and examine one of the mysterious objects that are scattered throughout the landscape. The voice appears to be speaking French although it is hard to decipher. Fortunately, there are handy subtitles although even in English it’s all very cryptic. The basic premise of the game is to free the spirit and find out what lies behind its prison wall.

I was then directed to follow the rising moon and this eventually led me to the first puzzle in the game. Ironically I found this the hardest of the lot. It involved lighting up panels to release a platform. This had to be done in a certain order as some light turned the others off and vice versa. By pure fluke I accomplished this and eventually released a glowing ball of lightning type energy. The goal is then to channel this energy back to the castle by connecting it to a network of crystals. There are various things blocking the crystals and this makes up the remainder of the puzzle element of the game.

The emphasis of the game is very much exploration and with very little narrative and direction, you have no choice but to choose your own path in the game. However, once you pick up the trail of crystals you are being directed somewhat and have to make a conscious decision to stray off the path to fully explore the game. The game map is fairly large but there is a lot of empty space but then again that is rather the point.

Scattered throughout the game are strange human-shaped husks called sorrows which contain a glowing red light/jewel. There are ten to collect and you will need all of them for the end of the game. Their presence is indicated by flocks of crows and this assists you to find them fairly easily. Eventually, the game allows you to use a boat and a hot air balloon to find any remaining sorrows and this adds a bit of variety to your movement around the game world. You will not see another single living thing in the game other than the aforementioned crows and the game truly lives up to its name. Social distancing couldn’t be easier!

The only control method available in Separation is the DualShock controller. It’s fairly easy to walk around the game world and pick up objects and you can adjust your walking and turning speed to increase your comfort levels. The cursor is moved by the system tracking your head movement and this was a bit tricky to master at first. Once I got the hang of it, it was fairly easy to manipulate objects to solve the various puzzles.

The developer has stated that his main inspiration for the world of Separation came from PS2 classic Ico. Aswell as 19th Century German Romantic landscape painter Caspar David Friedrich (I had to google him). A strange combination but very effective. Such an ambitious concept would usually be limited by the PSVR’s graphic capabilities. However the sparse and lonely dystopian landscape is well rendered and therefore very immersive.

There is a definite sense of scale and you will feel slightly vertiginous when balanced on a narrow walkway or pipe far above the ground. The mix of medieval ruins and industrial/space-age debris is both foreboding and fairly calming even though the whole landscape looks like the aftermath of a fairly hefty nuclear explosion. There isn’t much way in of colour. However, when you find one of the glowing red gems in the husk-like bodies of one “the sorrows” it really stands out and appears alien to the world.

The day and night cycle is fairly spectacular with the sunrise bathing the world in bright light and a giant moon rapidly rising over the landscape as the light fades. This all adds to the atmosphere of the game and the way the light strikes objects in the game world is very impressive.

The audio in Separation is definitely one of its strengths. It alternates between long periods of eery silence with the only sound being your footsteps echoing on the metal structure you are walking on. Then moves on to soaring ambient music indicating you have made progress in the game. This contrast is used very effectively and adds greatly to the overall atmosphere of the game. There is an air of destruction and decay in the game and the creaking groaning sounds of the gear mechanisms of the lifts and other equipment you use in the game really emphasise that.

The only other sound in the game is the ominous cawing of the crows which indicate that you are near one of the sorrows. Crows are intrinsically associated with death and their menacing presence is felt throughout.

All in all, a very clever use of audio making it a fundamental part of the game. Audio is sometimes a bit of an afterthought and a lot of developers could learn from this so hats off to Recluse Industries for absolutely nailing it.

There seems to be a bit of variance in people’s views in respect of the duration of the game. It is marketed as being around 6 hours plus. However, there are reviewers who claim to have finished it in 2-3. It very much depends on how much you wish to explore the game world. Whether you simply try and solve the puzzles and collect the sorrows as quickly as possible. It’s very much down to personal preference. But, I do think that if you try to finish the game as quickly as possible you are somewhat missing the point of it.

In terms of comfort, it is pretty good. You can adjust your walking speed in the settings and also use blinkers to control your field of vision. The use of the movement of your head for the cursor can start to get a bit uncomfortable but if you approach things at the optimum angle it is ultimately not a problem.

In terms of replayability, I am not sure it’s a game you will come back to time and time again. If you thoroughly explored the game world in your first run through there won’t be much to entice you back for a second go. The puzzles all appear to have one solution so again no reason to revisit these. However, if you enjoyed the game world and the haunting atmosphere it may well entice you back to hang out in glorious isolation.

I love games that make you think. With everything that’s going in the world, I was already in a very reflective mood. Separation really struck a chord with me. I think every player will have a different take on the game. Some people simply won’t get it. They will see it as a fairly generic PSVR walking simulator with a few puzzles thrown in. Others, however, will find their own meanings in it. However, on reflection, it is very bleak (and knowing what it inspired it) I actually found it a very peaceful and relaxing experience. It explores loss and isolation in a very unique way and will definitely make you think. As I said, however, some will see lots of meaning in it and some will simply not get it. It will be a very personal experience. For those who have experienced loss, grief, and or depression it will definitely hit home. In my opinion a great achievement for a solo indie developer and one to be applauded. If you are looking for something a bit different and cerebral then Separation could be the game for you.