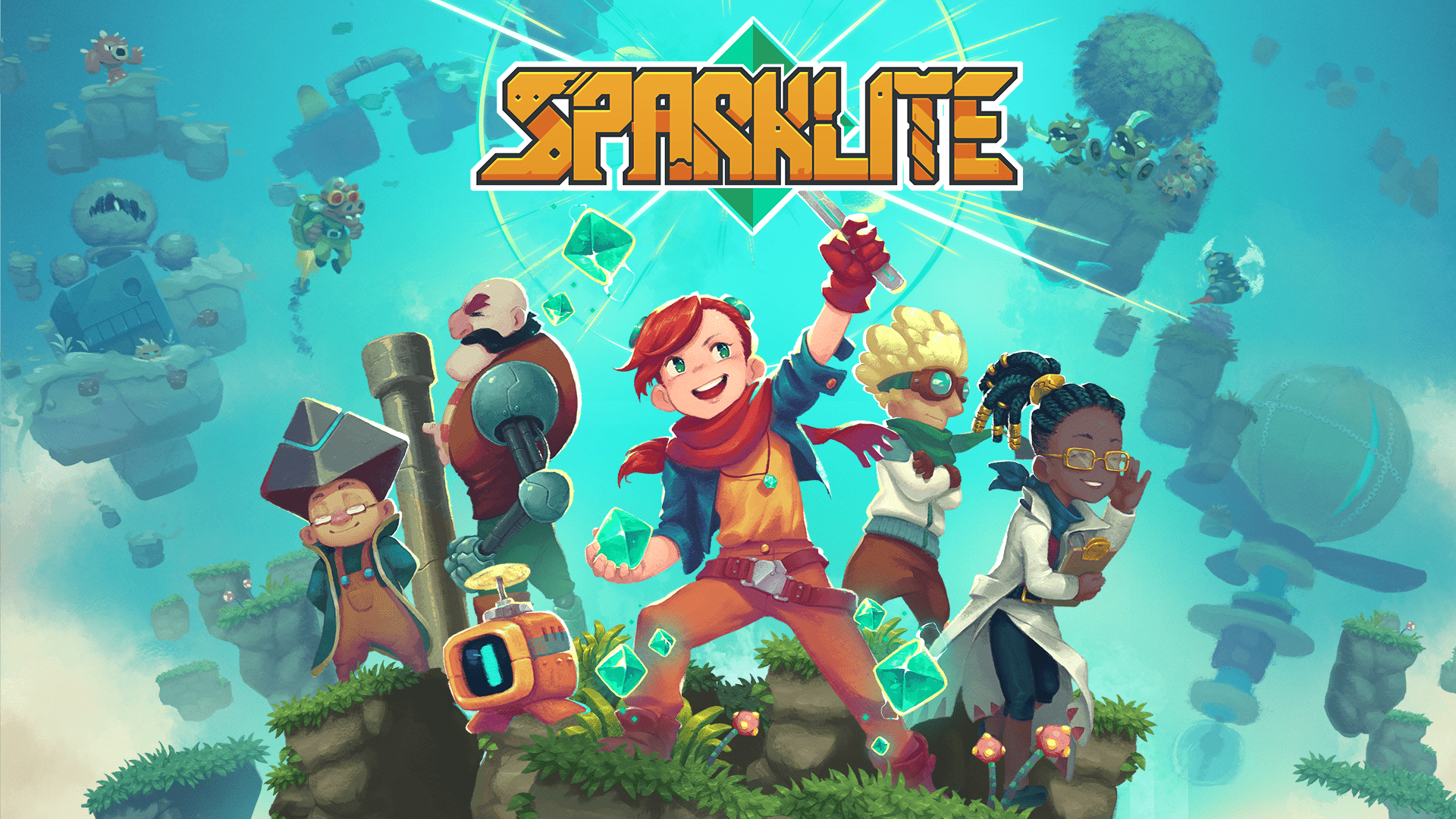 So, you want to make an indie game? Let me tell you the three basic things you need to do: 1. Pixelate those graphics, 2. Randomly generate your levels, and 3. Pick a classic Nintendo game for your gameplay. With an abundance of games following this plan on every platform, it’s difficult for any developer to stand out from the crowd.

Sparklite, the first game from Red Blue Games, aims to grab your attention with its own take on classic action-adventure titles. Released on 14th November (for PS4, Xbox One, Nintendo Switch, and PC/Mac), let’s find out if this will be shining star in your game library.

Sparklite puts you in control of Ada, a mechanic who finds herself in the middle of Geodia, a land held together by a resource called Sparklite. In typical fashion, all is not well, and in this case, we have an evil Baron trying to harvest the land’s core.

At its foundation, Sparklite plays and controls like a classic top-down action-adventure. You, and your robot pal Wingnut, venture screen by screen, welding your trusty wrench, in a bid to defeat the Baron and his henchmen. A variety of enemies stand in your way, and defeating a boss will grant you new abilities, which, in turn, gives you access to a new part of Geodia to explore.

Where Sparklite separates itself is with its procedural generation. It’s a system that’s cleverly tied in the story of the game and keeps each play through refreshing. Unlike the rouge-lites typically associated with this mechanic, however, death isn’t punishing and you’re not sent back to square one each time. Instead, whilst you lose some items, you keep your resources, progress, and bosses don’t respawn.

Whilst it does mean Sparklite doesn’t offer the challenge of its peers, it keeps the focus on the adventure. And even though the land changes on each play, you’ll become familiar with Geodia.

This is helped by the way the world is generated. The game’s engine doesn’t place terrain and enemies at random, instead, it’s more like a jigsaw. Each zone remains roughly in the same place, and the engine will place a selection of pre-designed tiles into the area.

Controlling Ada is a joy. Things here are tight and responsive, and combat feels satisfying. You can upgrade your arsenal along the way, and there’s a well-implemented slot based upgrade system, which will force you to have to make tough choices about how you prepare for battle.

Sparklite adds a different take to classic gameplay. Graphically, however, it keeps things simpler, but, what is here is beautiful. The team at Red Blue Games clearly have a love for pixel art and retro games, and it shows. Characters are wonderfully designed, expertly realised, and the crisp animation throughout brings Geodia to life.

Each of the 5 zones you visit have distinct themes, and all ooze atmosphere. On the adventure, I was taken from lush green fields and golden woodlands to mountains and acidic swamps, despite the adventure taking place in a relatively small map.

I never experienced any performance issues during my time with Sparklite. Moving between areas does prompt a load screen, but these are kept to a minimum and never felt intrusive. Attention has been paid to every detail, and small touches like button prompt animations, along with simple screen shake effects, all add to the game’s charm.

Red Blue Games cites GameCube soundtracks as a primary source of inspiration, and it certainly shows. Each zone has its own distinctive theme, which perfectly complements the design. The Vinelands are light-hearted, whereas the swamps have deep, brooding sounds.

Whilst the tracks to be found are great, there’s 1 per zone. A lot of the longevity comes from farming Sparklite, so you’ll be revisiting areas often. And as a result, you’ll be hearing the same music, a lot. Whilst the tracks are enjoyable, the repetition, unfortunately, means they grew mundane.

Sparklite makes great use of sound effects. There’s a superbly satisfying thud when you smack a fool with your wrench, and small sound cues add to already impressive atmosphere and charm of the game.

It’s here where we see Sparklite’s biggest downfall. With only 5 zones, it’s a relatively short experience. The game does get tougher as things progress, and I found myself having to farm Sparklite in order to purchase upgrades. However, running the same loops did become tedious.

Whilst each area visually is excellent, they all play the same. There are no unique dungeons as you’d expect to see. Instead, you find furnaces placed throughout the world. They’re the closet thing to a dungeon – you work your way down a few floors of various challenges (both platform and combat), but once you’ve seen one, you’ve seen them all.

This isn’t helped by the largely redundant set of gadgets and secondary weapons. I found them to be of little use throughout the game, and only ever used them on the odd occasion when the game forced you to.

Equally boss lairs disappoint in Sparklite. All 5 are nothing more than the boss just waiting in a room for you.

There is a co-op mode, but it’s not what you’d like. Player 2 can take over Wingnut, but you’re doing little more than collecting things. Even Tails felt more useful in Sonic 2.

You also have ways to make it more difficult for yourself (eg: how about a run with no upgrades), but after the credits rolled, I didn’t have any urge to replay the game.

Overall, I did enjoy my time with Sparklite. It’s a lovingly crafted game with buckets loads of charm. However, it just doesn’t have enough variety to make it stand out from its peers. That said, Red Blue Games have shown a lot of promise here, and I truly look forward to whatever they do next.

For now, though, I’d recommend Sparklite to fans of the genre looking for a short game to play over a weekend. Just don’t expect something you’ll keep coming back to. With this in mind, I award Sparklite a Thumb Culture Silver Award!